Arbus hunts out forms that can be judged as impure, hidden from the view of everyday onlookers. Whilst transsexuals, tattoos and prostitutes are now very much part of the “Official Institution of the Conventional Archetype of the Bizarre”, there is a kind of honesty in this particular photographic work which always manages to unbalance the “most secret of secrets”.

I saw this show a few months ago in Berlin but it took some time to fully digest it. This dense retrospective of Diane Arbus’ photographs is a fine occasion for the appreciation of her work. It is confusingly commonplace to like this artist and with there being such an abundance of writing concerning her work, it is quite risky to write about her. The photographs find their equilibrium between the brutality of their documentary nature and the presence of an almost romantic fiber; here the two approaches are combined in the same gesture: the photograph and therefore the encounter. Everyone can earn their right to exist through these images, even a yo-yo champion or a “Miss Potato-Peeler”.

As with all great photography, discipline combines with chance, a most appreciated quality, provided it remains neither fully tamed nor untamed. The quality of the visual composition is strictly academic yet in this they find a particular appropriateness. She takes us on a journey through the unknown. There is an evident intent in the way that a NY Movie seems to look more like the Titanic, overcome by the depths of night, than the normal cinema we might normally expect to see. We need to hold on tight as the power of projection provokes a marked sense of vertigo. Darkness embraces us, even swallows us. One must allow oneself to become one with it. 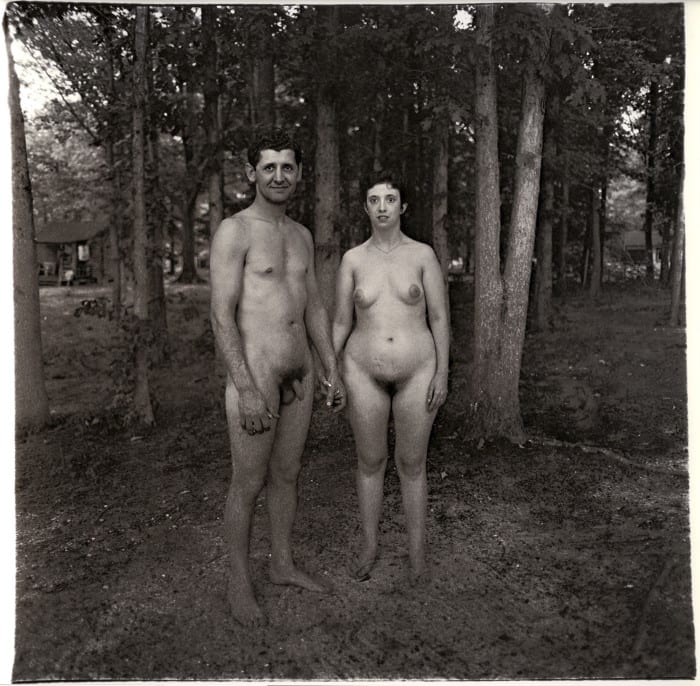 She captures epileptic fits as she travels through the city, a leg is stretched out slightly, a grimace is barely highlighted, tense fingers trace the outline of a grenade, betraying the park’s perceived calm and tranquility.

Even though we identify ourselves with them, the stranger has first been part of a conscious selection of models. Arbus hunts out forms that can be judged as impure, hidden from the view of everyday onlookers. Whilst transsexuals, tattoos and prostitutes are now very much part of the “Official Institution of the Conventional Archetype of the Bizarre”, there is a kind of honesty in this particular photographic work which always manages to unbalance the “most secret of secrets”. These people are shown as themselves, freed from any kind of mystification. Through this definition of normality and the search for its reformulation, or even abolition, Arbus prefers to express the solitude of the individuals, further underlining it with the very violence of the photographic act, the sudden incandescence of the flashbulb, as can also be seen in the work of Lorca Di-Corcia. Here a burning pine tree appears just as lost as a dwarf in a rocking chair. In one of her last series, she chose Down’s syndrome children playing in a park as her inspiration. In an interview she explained that she barely saw any need to even develop the photographs, since in the relationship between play and otherness, between tenderness and spontaneity, she had already perceived something which could be the total summation of beauty. A stranger walks among deformed bodies, but through the essence of reflected faces, Diane Arbus photographs the stranger inside us. Certitude evades us. It would be reductive and incorrect to consider the work of Arbus as a bestiary of bizarre bodies, since it is through these everyday landscapes that the photographer allows the unknown to break free and become apparent. She captures epileptic fits as she travels through the city, a leg is stretched out slightly, a grimace is barely highlighted, tense fingers trace the outline of a grenade, betraying the park’s perceived calm and tranquility. One could stress a certain obsession with Siamese twins. As teenage sisters, grand-mothers in matching dress or even as embryos in a sample jar, they coexist in the same frame. This enigmatic double also appears in the form of ghosts, remaining unseen yet we can almost make them out. Our reflected double chases us, contradicts us. In one of the photos, a grandmother closes her eyes; the shadows around her seem to jump as if provoked by the mere trembling beneath her eyelids. The exchange between the interior and exterior of the soul is overwhelming, as if the multiplicity of the self, along with all of its contradictions and prevarications, are actually printed on to the photographic plate itself. 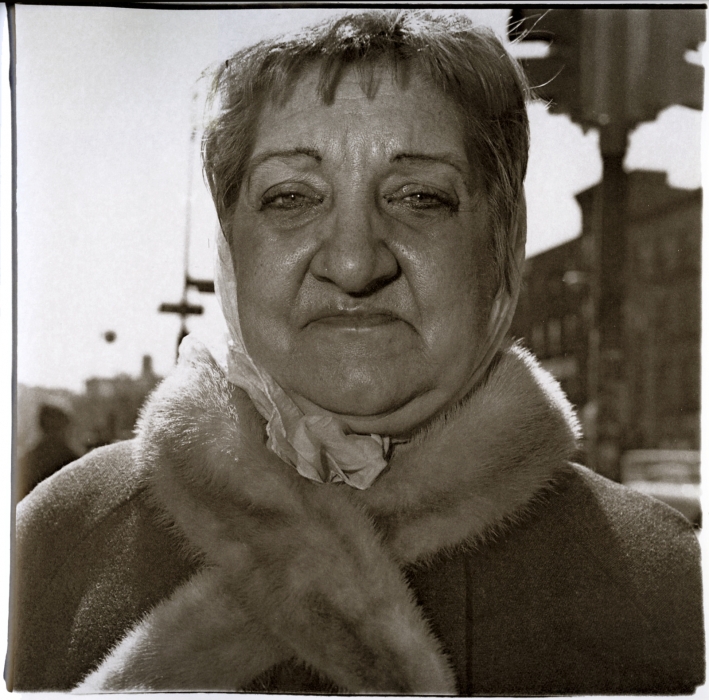 The photographs appear self-evident and luminous, whilst effectively covering the complex realities of life, portraying these mysterious powers through the very fact that something is escaping our attention. These images must be consumed with the stomach as much as with the eyes. Their immediate and yet durable nature is appreciable, as is the rich but simple approach, especially since it is kept free from false debate of vague concepts. It is not the dominant power of the artist that imposes its vision but the emergence of something from this zone of indeterminacy existing among multiple weaknesses, something to which we can emotionally attach ourselves, if we choose to do so.

We are a long way from the kind of artist with whom contact, discussion and surprise give way to methodological, intimidating and even summarily irrefutable debate. Where Arbus makes use of a gimmick, she uses it with an even-handed ethical discipline. This kind of discipline is dying out among artists, as they remain obsessed by the technical possibilities of their media, imposing a relationship of authority which can only either validate or dismiss the onlooker. Artists that proudly restrict themselves within their own science and, with their pride and fear of being unmasked, progressively discard all possibility or means of any judgement of their work. “Spending one’s life trying to resist demolishing it” among other formalities, this is a completely new kind of Kafkaesque program to which Arbus freely invites us to participate, through the nudity of the tale, the fragility of the fable and, of course, humour.

Sensitivity becomes a capital that must bear fruit like any other investment, too occupied to perfect their social disguise as an artist, so many creative artists must now provide – almost bureaucratic – proof of their workings out (workings that no longer function as a tool but as an end in themselves) such that they may escape everything, above all literalness. It is not so surprising that this literalness is so terrifying to them, since it takes the content for itself, stripped bare with a painful and almost annoying simplicity. Yet it is the very rumbling and lightning-like nature of this incisive literalness which is at work in Arbus’ work, what Evans calls the “naivety of the devil”.