from Urban Life: Beauty is in the Name of the Beholder @ Nontsikelelo Veleko

POV Female Johannesburg – five young female artists featured in a limited edition box of 100 copies. POV stands for Point Of View and has featured artists from London (2011), Tokyo (2012), Johannesburg (2013), and will be held in Mexico (2014) and New York (2015). The aim with the initiative is to, ”confront us with questions of gender, geography and gaze”. The project is launched by Damien Poulain and published by Oodee Publishing House, in London. The artists featured in this edition are Tracy Edser, Lisa King, Nadine Hutton, Alexia Webster, Nontsikelelo Veleko.

Tracy Edser’s, WINDOW RWANDA, consists of a collection of black and white photographs of people in rural villages in Rwanda. They portrays their daily shores and activities – kids playing by the roadside, women carrying baskets of fruit on their heads, groups of people socializing in the dry landscape. There’s no text supporting or explaining the work. To me, they seem to be a classical example of someone from outside curious on somebody/something else – the variation of full bleed photographs that cover whole spreads and postcard sized landscapes one on each page ease up the initial ’photojournalist–feel’ of the series. Reading about the work I am being informed that all the images are taken from the window of a van and they are not meaning to explain or convey anything but the photographers fascination in the history and of the people living in a country that has lived through a history of violence, fear, and genocide.

A piece of writing explaining the background and up-until-today history of the multi-cultural population of Ghanzi in western Botswana followed by a collection of crisp, clear, and low saturated colour photographs is what Lisa King’s, GHANZI, is consisting of. Observing and portraying the hustle and bustle of the major event of the village – the agricultural fair, and the mixture of people from various backgrounds and origins that together comprise the community. The tradesmen, the farmers, the families and their stalls, their cattle, and their interaction and dependence on each other. Scenes and surroundings such as spectator arenas, party tents, food wagons are captured both without people and then with the on-lookers, buyers and workforce that all are part of the annual coming together. The photographs are square format and beautifully colour- and content coordinated.

Nadine Hutton’s, I HAVE FALLEN, is a work made in colour that mixes landscapes & portraits, people & objects, movements & stillness. In afrikaan, ’Ek het geval’, means, ’I have fallen’, and this is a portrayal of a small part of the large groups of white poor in South Africa. Beginning with a long introductory text to the history of the white Afrikaners and their situation before and after the end of Apartheid, Hutton captures the living conditions at this squatter camp in the middle of Danville, located between west Pretoria and Atteridgeville in South Africa through images and interviews with the residents. She show us both the misery and the optimism that is prevalent in this community of people striving to make ends meet or basically just survive. Including the photographed’s own voices and views on themselves and their life turn this work into a collaboration between viewer and viewed. ”As a photojournalist I have always avoided representations of the people I photographed as the “other” but several years ago, I realised that much of my work was looking outside of my own experience. I was born into a typical poor white family in Johannesburg, but escaped the cycle of poverty. While we were never as poor as those I met on the project, I recognized a commonality of experience. I saw the project as a way of disrupting the political and photographic stereotype usually associated with this subject. While my intentions are neither to sentimentalize nor seek sympathy for the subjects neither is it to ridicule”. The use of formal and informal composition, variation in size, and unusual cropping of the images makes this visually interesting and intriguing as well. 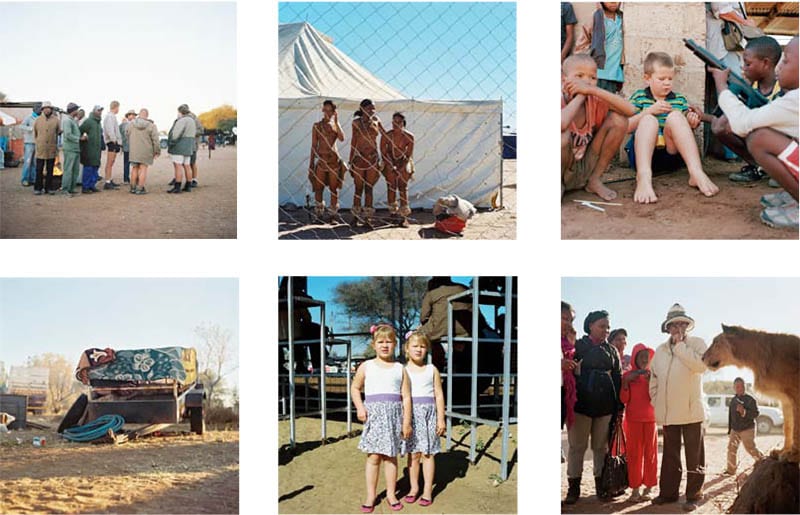 Alexia Webster, HOGSBACK, stands out from the other works that’s exploring a place and its people with her richly saturated colour photographs that carries a darkness, and something magical, fantasy-like about them. Besides the cosmic environments, Webster has made portraits of people and animals in the forest and the village of Hogsback. The visual impression is so vivid and almost surreal that some animals are looking ’photo-shopped’ into the lush flourishing green, blue, and brown surroundings. Many of the photographs are taken during night with ambivalent light sources enhancing the mystical atmosphere. A brief history is given of the first settlers, the missioners, that ancests to the people now either living in the town or being in exile due to their ’black’ origin. ”Today, 19 years after the fall of apartheid, the village is still a hauntingly beautiful but unsettled landscape struggling to come to terms with the ghosts of its past and the inequalities of the present. This project explores the village now and searches for a glimpses of those spirits, including my own ancestors, who roam these ancient and haunted forests.”

”Beauty is in the name of the beholder” – Nontsikelelo Veleko’s, URBAN LIFE, consists of 20 colourful, vibrant, streetstyle portraits of Johannesburg’s stylish inhabitants. Always placed in the middle of the lens, the page, the photographed are either standing alone on a spread or paired up with another fashionista. The Smarteez are a fashion design collective with a common signature of creative, funky, colourful, garments and a ruthless mixing of vintage or found clothing with newly tailored and highstreet clothes resulting in higly individual styles that are being the trendsetters and inspiration for a whole generation of young Joburg’s with a hunger of expressing themselves freely and fiercly through their dressing.

When comparing it to previous year’s editions I begin to fully understand how these editions, ‘raise questions about gender, geography, and race’ – not only does these photographers explore these themes in different terms, but the works chosen for the different geographical locations all have some shared thread running trough them. For the POV Female London (2011) the works, in general, seem to be more personal, intimate – exploratory on a smaller scale. Friends and family. Particular interests. Edge. The works from POV Female Tokyo (2012) seem to share a wider, more open to interpretation, poetic flow. A suggesting stillness and a more coherent visual language. When now confronted with the works from POV Female Johannesburg I begin to see similarities between and in them too – they all tend to explore aspects of justice, community, social and political issues and occurrences, and the struggle/motivation to survive and live in a places with a broken history and changing today.

This is a collection of works from artists that live in a previously divided country that still are under construction in the aftermath of the apartheid. The contradictions and many different aspects of living in communities, villages, and countries that have gone through many shifting epochs and eras in ancient and recent history up until today, and still struggle with coming to peace with the old and on terms with the new. An interesting and diverse collection of works bringing out new perspectives, angles, and views on people, places, and problems to an international audience. An inspirational initiative and interesting outcome.