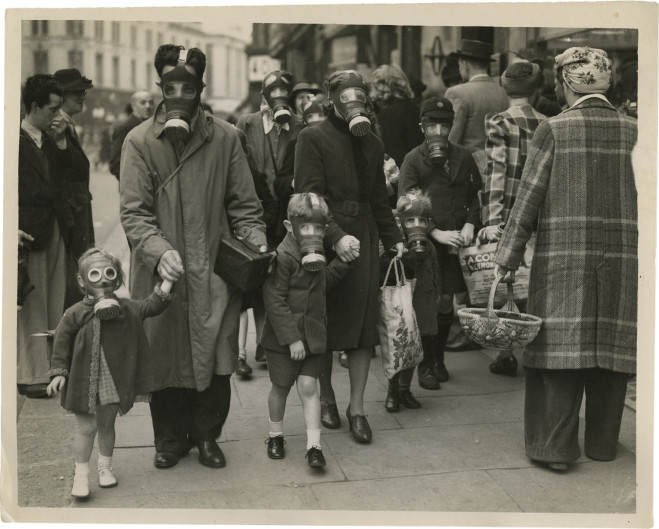 By Elizabeth Breiner, for ASX, July 2013

Entering Daniel Blau Gallery’s succinctly titled Blitz: WWII in London, I was surprised by the understated aesthetic of the space, from the light, modest-looking wooden frames utilised throughout, to the crowded and generally informal layout of the room—some prints hung so low as to be visible only from a crouch, almost as if to evoke a genuine sort of bomb-shelter ambiance. While the exhibition is divided up into vaguely recognisable sections – preparatory measures being taken against bombings, the physical effects of the raids themselves, clean-up efforts, acts of British solidarity, and citizens’ attempts to persevere with their everyday routines – there are no written signifiers demarcating these subdivisions; in most cases, instead of wall captions, the newspaper captions that were printed contemporaneously with the photographs on display are included within each frame to inform the images. Even the exhibition’s official title is pared down so as to be descriptive only in a strictly informative sense, without so much as a framing subtitle to lend a sense of focus.

While this deliberate minimalism may sound like a deficiency on the part of the gallery, in fact it represents an interesting and rather unconventional approach. In a city as patriotic and saturated in symbols of its own unwavering spirit as London continues to be, the gallery was no doubt tempted to reinforce this nostalgic sense of Britishness in its presentation of the images. That there is not a single mention of ‘Keep Calm and Carry On’ – one of a series of propagandistic slogans that actually surfaced during the pre-war period in anticipation of such sieges on British morale as were to come – is to Daniel Blau’s great credit. This is not to say, of course, that many of the works as viewed through the unequivocal lens of their pointed captions, communicate any less a message of British unity and resilience in a time of trial. There is the famous image showing workers atop Crystal Palace preparing for its conversion into a munitions plant in ‘Four O’Clock Tea’, determinedly ‘tak[ing] time out for tea at the traditional hour’ in spite of the Germans’ dogged attempts to disrupt their unshakeable cultural habits. We see the London Times headquarters reliably churning out a daily dose of news for its readership, the caption proudly attesting to the paper’s failure to miss a single edition throughout the preceding period. One image entitled ‘Still Saucy Beggars’ even bears the almost offensively cheerful caption, ‘It’s an ill bomb that blitzes nobody some good.’

In equal measure, however, the journalistic mediation of fact drifts away from mere morale-boosting propaganda, and irresistibly toward sensationalising the devastating destruction of the great city (and country at large). ‘DIRT, DESOLATION, AND DEATH’ reads one unforgiving caption; another captioned ‘Destroyed Coventry Cathedral’ laments the cultural loss of ‘one of the finest examples of perpendicular architecture in England’. The corresponding images are meant, of course, to elicit outrage and horror at the irrevocable losses sustained—the emotional complement to admiration for British solidarity and resistance. This combined message aimed to forcefully convince the world, particularly the Americans, that the British people both deserved and desperately required their assistance. It is no accident that the photographs on display can be categorised so clearly according to content and intended impact: the British Ministry of Information, run by Alfred Duff Cooper and overseen by Churchill, had a highly systematic, multi-pronged approach to the production of wartime propaganda, and distributed assignments to their staff photographers accordingly. Director of the Ministry Film Division Kenneth Clark, for example, was responsible for commissioning work conveying Britain’s historical and architectural damage, targeted specifically at American audiences; it is Clark who tasked the late and great Cecil Beaton with creating History Under Fire, one of the best known collections from the period highlighting Beaton’s theatrical style and fascination with the classical form of the arch. Bill Brandt was another established photographer who, like Beaton, received a special commission from the Ministry, in his case to photograph London shelters—based on his successful brand of Brassai-inspired night/flash photography work, as seen in his 1938 collection A Night in London. A print of his famous image depicting beleaguered Londoners spending a crowded night in the Elephant and Castle underground station is among the photographs on display at Daniel Blau, alongside a couple of other lesser-known candids from the same set.

Still, it would be wrong to presume that such photographs are wholly restricted by their categorical propagandistic objectives. In spite of the fastidious control exercised over the period’s photographic output, with each image intended for publication being subjected to exhaustive censorship, many of the photographs have a complex emotional resonance, at once timely and timeless, that far surpasses their intended symbolism. One side of this resonance is linked to the overwhelming uncertainty of the time – the Blitz was, after all, the first mass bombing campaign of its kind in history; as the months passed with no end in sight, there was an inevitable point of surrender, not to the German forces themselves, but to the air raids and the accompanying instability of existence as routine, even ordinary. There is something particularly evocative from a modern perspective about the photographs of everyday life under the Blitz, particularly images like ‘Tear-Gas Test at Richmond – A Family Out Shopping’ (1941), showing a family hand in hand, all walking in a single line towards the camera, shopping bags in hand, gas masks in place. The simultaneous foreignness and familiarity that gives futuristic science fiction films their intrigue is what we also find captivating about these images; their surreal depiction of a kind of apocalyptic normalcy makes us thrill with an unusual, slightly sick excitement, as we imagine our own world as we know it under siege.

This distinctive form of excitement, however, is not only particular to a contemporary audience, and indeed represents the other side to the photographs’ subtle artistry and emotional significance. Fear, naturally, was the overriding emotion of the time, and it is the intricacies of this emotional state that supply the photographs with their final layer of meaning. These images were not simply documents to reveal what remained, what was, but equally – however unspoken this might have been – to memorialise what might at any moment no longer be. Even the most documentary among them, depicting the most average, everyday occurrences – whether strange as in ‘Tear-Gas Test’ or decidedly unexceptional as in ‘London Cats Loyal’, an image as nondescript as it sounds – held special import during their own time; for they were preservational, externalisations of the overriding terror of non-being, each showing something or someone that might very well be gone the next day – or even the next moment. For Londoners, the years of the Blitz were characterised by a heightened sense, not only of the possibility of their own annihilation, but of the annihilation of an entire city and its lengthy cultural history, all evidence of their existence reduced in seconds to rubble and dust. Like the sudden blast of a bomb, the quick flare of a camera flash or snap of a shutter could mean the difference between a thing gone and a thing preserved.

The perpetual potential for instantaneous obliterating destruction gave to every passing moment a unique and incomparable vitality. ‘What would you do if you knew you would die tomorrow?’ we delight in asking each other; and for nearly a year, between 1940 and 41 Londoners were forced to answer themselves this question each and every day. It is no surprise, then, that between 1862 and the present day, marriage rates in England in the year 1940 were at their absolute highest by a margin of over 30,000.[1] Writing from the time often seems to be characterised by a wild, poetic sort of inspiration. Even some of the journalistic captions wax a bit lyrical: ‘BOMBS PAINTED THIS PICTURE’, reads one, ‘REQUIEM FOR A RAIDER’ another. Ernie Pyle, Pulitzer Prize-winning World War II correspondent wrote of a particular night raid in 1940:

…the thing I shall always remember above all the other things in my life is the monstrous loveliness of that one single view of London on a holiday night – London stabbed with great fires, shaken by explosions, its dark regions along the Thames sparkling with the pinpoints of white-hot bombs, all of it roofed over with a ceiling of pink that held bursting shells, balloons, flares and the grind of vicious engines. And in yourself the excitement and anticipation and wonder in your soul that this could be happening at all.[2]

If we bear in mind this quote when we consider Herbert Mason’s iconic 1940 photograph of St Paul’s Cathedral rising out of the fog – one of the stars of Daniel Blau’s show – its majestic beauty seems to stand for far more than simply British endurance and indestructability. It also symbolises the simultaneous awe- and horror-inspiring magnificence of the Blitz era destruction; the sensation of seeing the entire skyline of one’s city ablaze with fires, of truly understanding the fantastic fragility of life. ‘Under the soft light of the moon the blacked-out town had a new beauty,’ wrote Brandt during this period. ‘The houses looked flat like painted scenery and the bombed ruins made strangely shaped silhouettes . . . Through the gaps [of bombed ruins] new vistas were opened and for the first time the Londoner caught the full view of St. Paul’s Cathedral.’[3] What might serve as a fitting caption to Mason’s photograph also more broadly emphasises the way in which, even in a historical moment of greatest darkness, physical and psychological loss might occasion new possibilities for seeing.

The strength of Daniel Blau’s Blitz exhibition is that it makes no effort to mediate the viewer’s experience of the images present, leaving open the possibility of accessing something deeper and more complex than their intended surface meaning. The censorship and media bias at play requires no explanation, as many of the photographs are displayed along with their original, often visibly edited captions, some images still revealing the wax pencil markings of an officially ordered crop. If the captions are incongruous with the photographs – as they frequently are – or a scene seems contrived or one-dimensional, it is for us to make these judgments and fill in the gaps. Nowhere does Daniel Blau even provide any background into the compiling of the 92 photographs on display, which were painstakingly uncovered and purchased from numerous collectors and art dealers over several years’ time leading up to the show. Nor does the gallery make mention of the difference between wire photos and traditional photographic prints (both present), or even attempt to highlight in any way the work of big-name figures like Brandt, creating an overt equalising effect, as if to give the other anonymous photographers represented their fair due. While a comprehensive and freshly framed exhibition on Blitz-era photography might be in order, this is not it. What Daniel Blau presents us with, however, is a show that is simultaneously modest and ambitious, and that by virtue of resisting familiar, ready-made categories, invites viewers to ‘read’ the images afresh, in all their historical complexity and ambiguity.
[nggallery id=535]

Elizabeth Breiner received her BA in English from Vassar College in New York, and her MA in Issues in Modern Culture from University College London, with a focus on the relationship between 20th century street photography and modernist literature. She is currently working as online editor, content manager, and occasional curator for Fotoura, while doing the odd bit of freelance writing on the side.