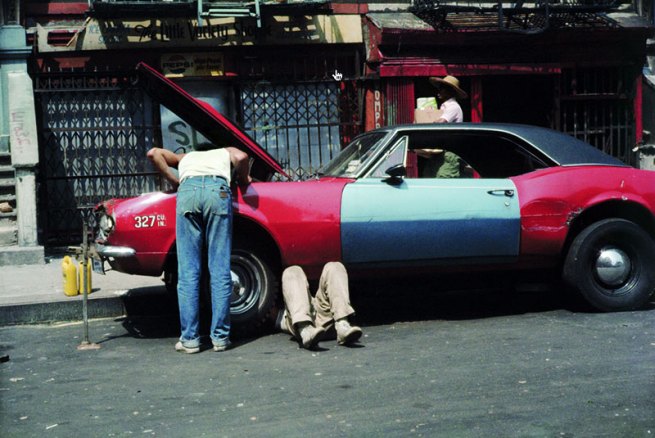 For most of her career, Levitt photographed in black and white, distilling her compositions into subtle gradations and contrasts. That all changed when she received a Guggenheim award in 1959 (renewed the following year), which she used to explore color for the first time. Levitt saw color as “more real,” meaning that is seemed closer to the vividness of contemporary life. Color served to bring out yet another aspect of people and their lived environments, though it never overpowered a photograph’s overall purpose. Thus, one cannot identify a “Levitt palette” – only the artist’s willingness to see a part of life that cannot be conveyed in black and white. Levitt largely shot in color slides, eventually preferring Ekta-graphic film for its high speed and versatility. Making photographic prints was an expensive undertaking until well into the 1970’s, so many of her pictures stayed in slide form until some explicit need required them on paper. In 1974, The Museum of Modern Art screened a group of her slides in one of its Projects exhibitions, Helen Levitt in Color (16 September – 20 October). As Levitt herself is quick to point out, this slide show was simply a means to keep the format consistent between production and display phases. It was also highly economical, allowing many pictures to appear in the same space over a relatively short period of time.

Slide projection created an entirely new viewing context for Levitt’s work, however. The carousel clicks pictures in time, evoking the sound of a camera shutter releasing and thus engendering a variant of the fleeting encounter so integral to Levitt’s photography. Levitt, who was known to edit her slides by holding them up against a white piece of paper, refused to see projection as an aesthetic statement. Nevertheless, she understood that images thrown by the light of a projector had a unique resonance and scale. A filmmaker with a background in editing, Levitt worked as a film cutter in 1941. The trimming of film strips (which coincidentally, was how slides were originally made in the 1930’s) required keen, decisive moves, which she possessed both in her selection process and picture taking. Projected slides accentuated her penchant for precision by offering both the luminosity and large-scale detail, which Levitt loaded into her images. And though a print underscores intimacy, a projection delivers pictures on a more public level, a feature that reinforces the communal nature of Levitt’s many street photographs. Through slides, the world of the city is transposed to the gallery – not as isolated prints hanging in frames, but as a series of constantly moving glimpses that flash and disappear, like the brief engagements people have on the sidewalks and subways of New York. 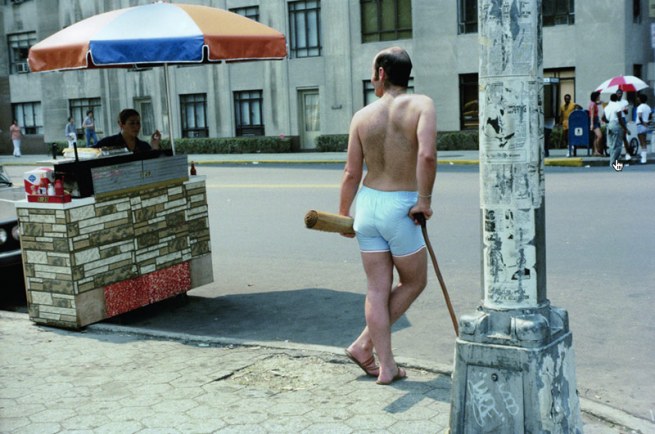 It was unusual for photographers to show their work as slides in the 1970’s, even though many used slide film while taking their prictures. There are several possible explanations for this. Though artists (and particularly Conceptualists) ostensibly resisted the production of artifacts that could be bought and sold, photographers cracking into a new market of possible collectors continued to value the print as a material item that, like a painting or some other work on paper, belonged in a frame. Photographers traditionally produced their work, too, for printed outlets – magazines, books, and newspapers. To many, pictures are best seen on pages, where life can hold still for contemplation, however momentarily. Levitt understood the range of options available to her as an artist, and she found in slide projection a means to intensify her view of the world and bring light to the color of city life.