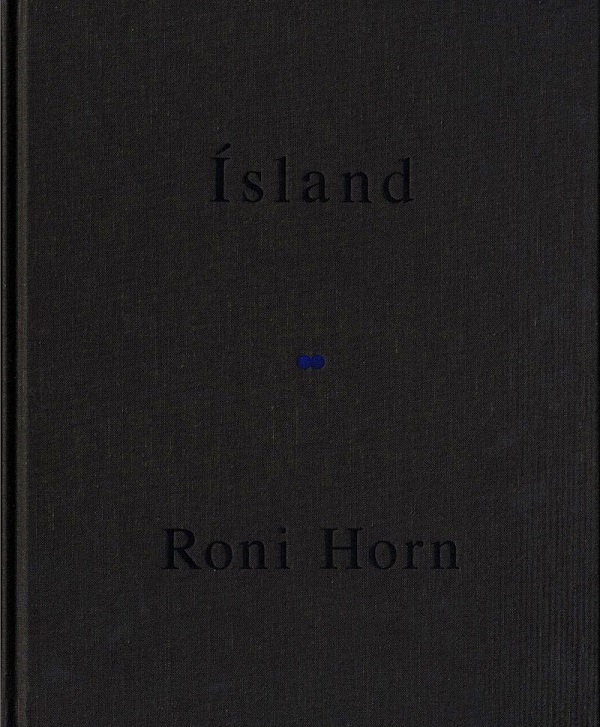 By Fanny Landstrom for ASX, June 2013

With titles such as Lava, Hot Pools and Verne’s Journey, each book in the series, To Place, are a separate body of material, consisting of 10 books all concerned with different aspects of the nature and life on Island. Haraldsdóttir Part Two (2011) is the last book in the series, and are a follow up on You are the Weather that was made more than 15 years earlier (1994-1995) as the sixth book in the series.

Roni Horn, known for using a mixture of medias and techniques in her works, such as painting, drawing, and sculpture, is this time using the camera only. Haraldsdóttir Part Two is a collection of 100 of photographs of the same Icelandic woman’s face surrounded by water presented in sequences ordered by colour and positioning of the face in the frame. No foreword, epilogue, or any other text is supporting the images, the series, or the book as a whole.

Its predecessor, You are the Weather, was made when Horn and the woman featuring in the images, Margret, went on a six weeks long excursion across Island where Margret was jumping into the outdoor thermal pools found along the way, regardless of weather, and was being photographed by Roni. The idea was, ”the face as place”, and how by photographing the same woman numerous of times in various of different weather conditions, her facial expressions and the visible surroundings would demonstrate and explore the relationship between identity and location. And also, investigate in concerns regarding the weather and the changing landscape of Island – nature and time. The result is a book with alterning black-and-white and colour sequences layout where Margaret sometimes appear on both sides of the gutter, sometimes only on the left side, and some times only on the right side with a blank page to accompany it.

2011, over 15 years later, Roni Horn created its successor, Haraldsdóttir Part Two. Same woman, same landscape, same colours, same layout, but more than a decade apart, Margaret Haraldsdóttir is once again staring straight at you when turning from one page to another. Her face is placed in the center of the image, as to an almost life like proportion, or more to the left or the right, sometimes a bit futher away from the camera (or you) so that more of the surrounding water and background are made visible. There is no details or information given about Margret herself and, once again, ’her face becomes the place’ – the current weather conditions and the pools are determing how the impression of this ’place’ will be given.

Her facial expression changes ever so slightly from one image to another. Always the eye-contact – though occassionally the eyelids are weighted down by the, presumably, harsh wind. Rain drops are finding their way to parts of her face, her hair, and her nostrils. In a few images she separates her lips. Clear ice-like lumps on her eyelids hints that the temperature is below zero degrees.

The closeness of the subject and the size of the prints allows you to really scrutinize her face in detail. It might be my Scandinavian origin and supposedly reservednessness, but this intimacy is almost intimidating. You are presented with a stranger that are inviting you to enter her private space– to come a little closer – to stare closely and intensly for as long as you want to. And as when doing something forbidden, the excitement of looking is heightened by this unusual relationship to the subject.

”My image of Island as a reflecting pool is the idea of using nature as a mirror and measure. It’s an understanding of oneself through a knowledge of what real, not imposed, limitations are. My experience and the ice-and-desert interior of Island provide and especially accurate reflection. The desert is a mirror. Its self-sufficient, self-contained, environment. It gives nothing. What you take from the desert is who you are more precisely”. This second book with Margret photographed more than 15 years later function as an emphasizer to the theme of the first book – the relationship between location and identity. Nature and time. Sequence, flow, tide, cycle, weather, creation, and development. Haraldsdóttir Part Two adds weight and cadence to You are the Weather – together, they possess a rhythm of their own – a little wheel covered in luxurious felt and bound with the finest of papers. Though, considering Horn’s reliance on the theoretical knowledge of the reader and the lack of textual description in the book, this is not a sequel standing strong on its own, it simply wouldn’t make any sense without the reference to its foregoer. But, being familiar with her previous work, this is a clever and beautiful successor that not only suggests, but clearly demonstrate the relationship between location, identity, nature, and time.