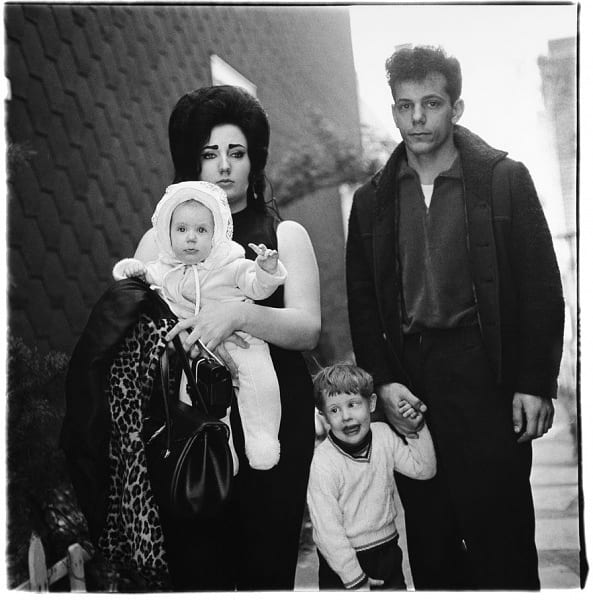 A young family in Brooklyn going for a Sunday outing. Their baby in named Dawn. Their son is retarded. NYC, 1966

The ten photographs, all of people except for the one of a Christmas tree in the corner of a home in Levittown, New York, show a range of groupings, from single figures to a family of four.

The closest Arbus ever came to producing the “Family Album” was the portfolio A Box of Ten Photographs, which she dated 1970 but first offered for sale in 1971, with an advertisement in the June issue of Artforum and a flyer that she sent out to influential curators throughout the country. The Box pulls together images made from negatives that dated from 1962 to 1970 that were emerging as her most popular ones. Of the ten, four had been in New Documents in 1967, and five appeared in a five-photographer show at Harvard in 1971. Five also constituted “Five Photographs by Diane Arbus,” published in Artforum in May 1971, a month before the advertisement ran. Arbus provided handwritten identifying “captions” for each portfolio image in the manner of a family album, and the clear plastic box that housed them, designed by her friend Israel, was intended to double as a frame, another reference to family photographs. The Box is unique in Arbus’s oeuvre. Because she alone, not editors and curators, was responsible for its contents, it might be thought of as the “Family Album” writ small, the once chance we have to see how she would have pursued this goal.

The ten photographs, all of people except for the one of a Christmas tree in the corner of a home in Levittown, New York, show a range of groupings, from single figures to a family of four. Words alluding to families and homes appear in the captions, directing our attention to the domesticity of even the strangest of figures. The Jewish Giant is seen “at home with his parents.” Lauro Morales, a Mexican dwarf, appears “in his hotel room”, his home. A retired couple in a nudist camp are seen “at home” (and “on the television set are framed photographs of each other”). As Arbus moves from the grotesque to the merely tragic, she equalizes all her subjects with the calming references to home and family. The caption for the Brooklyn family on a Sunday outing, like the picture itself, holds till the end the sting of the narrative: “A young family in Brooklyn going for a Sunday outing. Their baby in named Dawn. Their son is retarded.” The riveting picture of the twin girls from Roselle, New Jersey, needs no further reference to family in the title, so clear is its basis in the sisters’ near identical appearance, swearing to their shared family genes. The King and Queen of a senior citizens’ dance, who had never met before, are made by chance into a couple, for one night at least. One photograph, anomalous within this group because it suggests family by its absence, is annotated by Arbus as a “patriotic boy with straw hat, buttons and flag, waiting to march in a pro-war parade, NYC.” It presents as subject who seems adrift, out of step with young Americans of his generation, and with no sense of camaraderie.”