The people in Owen’s book Suburbia, are still under the “spell” of the American Dream. They live in California suburban communities where, according to Owens, “everyone… lives ‘the good life’, which means having attractive homes, high paying jobs, swimming pools and shiny cars.”

By James Guimond, excerpt from American Photography and the American Dream, 1991

Bill Owen’s documentary and photojournalistic work of the 1970’s is a good example of the differences that can exist between photojournalism and documentary photography in dealing with a subject like the suburban American Dream. Commenting on a slightly earlier version of that “good life”, Ingrid Sischy said perceptively, about the images that Dan Weiners make for Fortune in the 1950’s, that “almost everyone in them is under a spell – the spell known as the American Dream.” Sischy’s comment applies perfectly to the Sun Belt photoessay that Newsweek’s editors created with Owen’s images for their 1976 special issue on the American bicentennial. In that issue, published for the Fourth of July, the editors acknowledged that the bicentennial had been dampened a bit by Vietnam, Watergate, and the recession and inflation of the mid-1970’s, but they avoided using words like “mistake” or “failure”. They claimed that the United States was an “unfinished nation” whose people spoke “to the ongoing resilience of what used to be called the American Dream. They live for the most part in material plenty and believe it to be the reward of hard work… We are, the novelist John Cheever says, a nation ‘haunted by a dream of excellence.’ We have not yet despaired of making the dream come true.” As one of the editors told Owens, more bluntly, “We need you to show some of the good life.” Sure enough, elsewhere in the issue, and particularly in Owen’s Sun Belt photo essay, readers could see what Newsweek meant by “excellence” and the “good life.” The photoessay opens with a picture of a nubile California blonde in a sun suit, draped over the hood of a car and staring at Owen’s camera. Behind her, an attractive brunette also stares at the camera from behind her reflecting sunglasses. In virtually all of the pictures on the following two pages – described by the editors as “Civilization and its contents” – everyone is happy, tanned, and smiling: there are two young women in bikinis jumping into a swimming pool, two elderly “happy campers” smiling beside their trailer, a woman grinning as she eats at a fast-food restaurant, a blonde in a tight dress “boogieing at Rosie O’Grady’s Goodtime Emporium in Orlando Florida,” and an attractive brunette getting out of her car at a posh Houston country club. Sun Belt architecture is represented by a luxurious Phoenix mansion with its swimming pool and gardens and by shiny, soaring skyscrapers in Houston. Thanks to the pressure they put on Owens, and their ability to select and crop his images, the editors produced an updated version of the American Dream photo essays that Life and Look loved to publish in the 1950’s – a panoramic view of the country from coast to coast, filled with pretty girls, fun in the sun, and rampant consumerism. (On the other hand, Owens decided his Newsweek pictures look like “postcard photographs” and “everyone like the photo essay but me.”)

The people in Owen’s book Suburbia, are still under the “spell” of the American Dream. They live in California suburban communities where, according to Owens, “everyone… lives ‘the good life’, which means having attractive homes, high paying jobs, swimming pools and shiny cars.” But, instead of idealizing this “good life” as Newsweek’s editors did, Owens wanted to make a “documentary project” that would be “a visual/anthropological view of America”; therefore he used a “documentary style” as plain and direct as any picture made by Walker Evans or by an anthropologist lining up “natives” in front of their huts. Seen from that perspective, as just another culture rather than as a summum bonum of human achievement, the American Dream becomes considerably more comic and ironic. 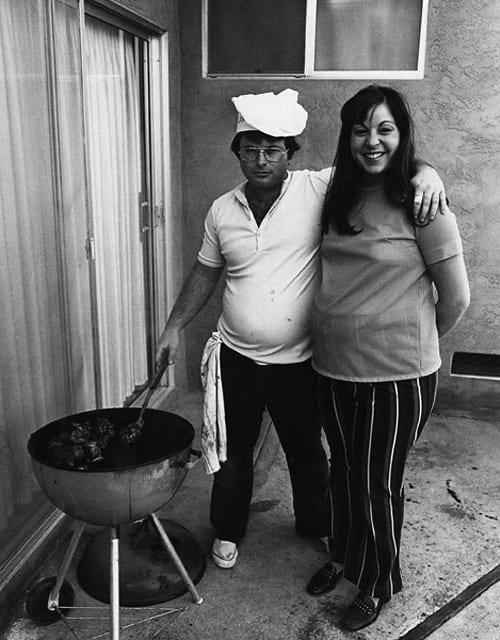 “Sunday afternoon we get it together.
I cook the steaks and my wife makes the salad. “ 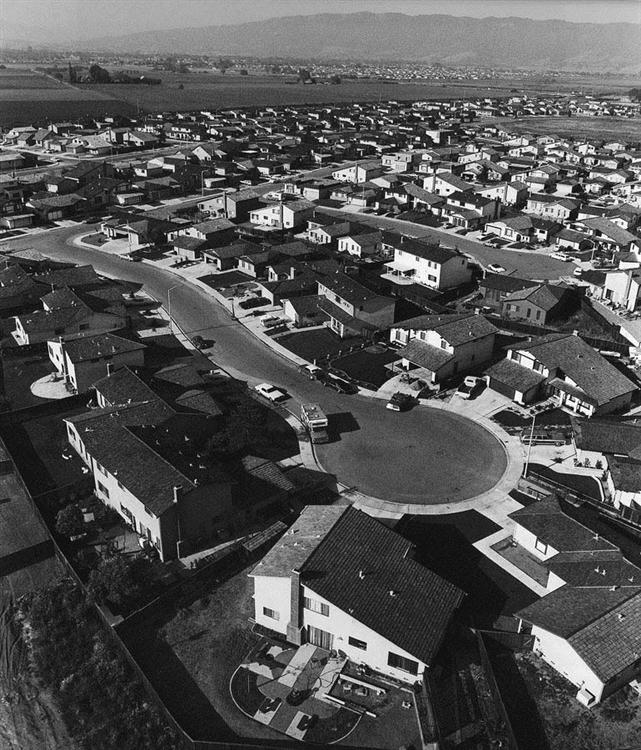 He advertised in a local newspaper that he was “working on a photographic project about suburbia. I would like to photograph your home, your children, pets or whatever.”

On the cover of the book as an image that invokes the spaciousness, the material affluence, and the mobility so often associated with the Dream since the 1950’s: a wide-angle picture of a split-level home with a boat and camper in the driveway. Owens introduced his pictures by explaining briefly that his work as a photographer for a local newspaper enabled him to meet people who “enjoy the life-style of the suburbs. They have realized the American Dream. They are proud to be homeowners and to have achieved material success.” One turns the pages expecting to see images from Life, but instead Owen’s first picture of people is a definitive parody of suburbia: a chubby little man and his plump wife stand over their barbecue grill. The wife is grinning like a model in a toothpaste advertisement, and the husband, wearing a chef’s hat, drapes his pudgy hand over his wife’s shoulders in a wonderfully comic expression of macho possessiveness amplified by his explanation of how they divide barbecue duties: “Sunday afternoon we get it together. I cook the steaks and my wife makes the salad.”

One of the most significant features of Owen’s approach to his subjects was that it was the opposite of Arbus’s. She hunted out subjects like nudists and transvestites, whose images would reveal a “forbidden”, alternative America behind the American way of life of the 1905’s and 1960’s. Owens, on the other hand, let many of his subjects select themselves. He advertised in a local newspaper that he was “working on a photographic project about suburbia. I would like to photograph your home, your children, pets or whatever.” Therefore, the people in his pictures identified themselves not only as suburbanites but also as suburbanites who wanted to be photographed as such. One of the most important things about the barbecue man and his helpmate is that they are trying so hard to look “suburban”. Like virtually all of the other people in Owen’s book, they still believe in the Dream of the 1950’s – lots of steaks, boats, cars, bicycles, kids, motorcycles, Tupperware parties, and squeaky-clean kitchens filled with all the latest appliances. Rather than finding the best camera angles and waiting for the decisive moments that would enable these people to look like the ones in the pictures magazines and advertisements, Owens photographed them in a systematic, sociological manner that Roy Stryker would have loved. In every picture we see the people surrounded by their belongings or in relationship to another in ways that reveal their values – but always in a crisp, no-nonsense documentary style.

Continue Reading in the book: 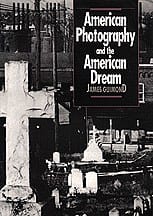