“The suburbs don’t change at the same pace of cities. Some of the places I visited twenty years ago will look the same way today. I’m not interested in crowds, so it’s more conducive to my working habits to be in the suburbs.”

May 2013, at Dashwood Books. Miwa Susuda translated for Koji Onaka.

Onaka’s most recent book, Twin Boat, was published this year by Session Press. Miwa Susuda was the book’s editor.

I joined a photography class in high school. While I was a student I bought Daido Moriyama’s book, Tales of Tono, which marked my introduction to photography as an art medium. The small book has lots of images from northern Japan and the city Tono. It became something like a blueprint for my embracing of photography. Later, I was also lucky to have the opportunity to work with Daido after I graduated from Tokyo Visual Arts. I became one of his last students participating in his gallery and workshop called, “Image Shop CAMP.”

Twin Boat is historical work for you, can you discuss what you were thinking about, and where you were at artistically when the work was being created.

First of all, I’m very happy this book came out, because ten years ago I created Slow Boat, which is black and white work from the same period. Then I had decided I was not going to take black and white pictures anymore, but that decision was rather melancholic. Twin Boat represents a rare-opportunity to revisit this earlier period and work with black and white photography again, after a decade of working in color. It has reinvigorated my desire to work in black and white in the future.

What were you interested in / thinking about / looking at, while working on these pictures?

There wasn’t a major aim or objective when I was shooting. At the time, in the late ‘80s and early ‘90s, I was responsible for creating pictures to be shown at my exhibition space, Gallery Kaido, which was open from 1988 to 1992, in Tokyo. There were exhibitions every month and I was photographing all over Japan so that each month there was something new to show at the gallery.

What are you attracted to when you’re shooting? Streets? Animals? Individuals? Because these are some of the recurring themes in the work.

There’s not a clear concept before taking my pictures. Photography is procedural and I take photographs of what attracts me, and then later this manifests itself as interests. The subconscious is at play, the work acts as a reminder of what I’m interested in – it’s what caught my eye. There’s not something in particular that is my subject. It becomes a process of self-discovery. 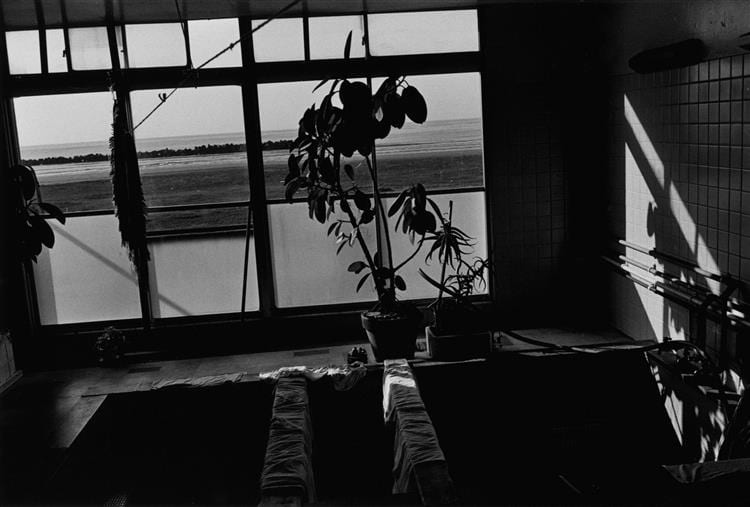 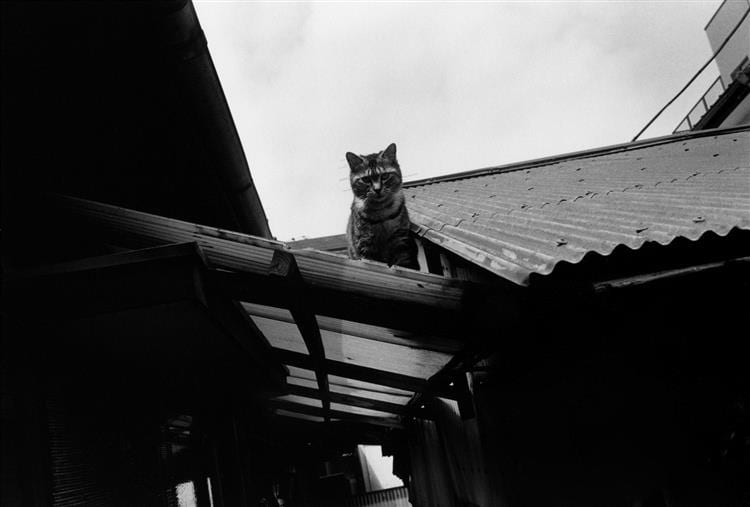 “Free associations are a very important part of my work, so there is a definite overlap with cinema.”

This new publication, Twin Boat is somewhat of a companion to your book from ten years ago, Slow Boat, even down to the dimensions and layout. It made me think about the idea of sequels, and how pervasive they have become in American Hollywood culture and society at large. I was wondering how you personally see Twin Boat, which mines the same period of images as Slow Boat.

I took many pictures while completing Slow Boat and being how the images in Twin Boat were previously unpublished, and being revisited at such a later date, I consider it an entirely new project, separate from the first book. These are images that I’m choosing to present now, with eyes that are a decade removed from the first project. Twin Boat isn’t a supplement but rather a complement, that also has a life of its own.

What is “boat” a reference to?

“Boat” is representative of my experience while photographing. If you chose to go on a railroad, the path is predetermined – it’s controlled. Whereas if you are in a boat, the path is influenced by a variety of factors that are constantly changing – the wind, the tides, the currents, and personal choice. You could make a stop in a bay, or not, and then go more quickly or slowly. A boat is also small and fragile. It’s about my life and the way I work with photography – it’s freer, more spontaneous and unexpected.

Black and white is intriguing because time and date are often ambiguous. Are you interested in exploring this dissociation?

After finishing Slow Boat, I began to use color exclusively. My hope is that my newer work has the same quality of ambiguous time as the black and white work. I don’t have a different motive with my color photographs, though I do appreciate the ambiguity of black and white pictures. Lately I just really enjoy using the color. It can be “poppy” and super bright, like in my series Tokyo Candy Box, or it can be more muted, as is the case with the series, Matatabi, which is comprised of photographs from Japanese towns, similar to those found in Slow Boat and Twin Boat. I published a book of this work with SuperLabo last year. The suburbs don’t change at the same pace of cities. Some of the places I visited twenty years ago will look the same way today. I’m not interested in crowds, so it’s more conducive to my working habits to be in the suburbs.

I discussed Twin Boat with editor, Miwa Susuda. She explained that the book’s American audience was influential to her selections. I found myself comparing your work to American documentary photography. I was particularly struck by the prevalence of American signifiers, such as the Coca-Cola logo, which indicates Japan’s post-war relationship with the United States, but also American influence on world culture at large.

Miwa chose all the images, so her choices are influenced by her experience in New York and in the United States. Her choices are much more influenced by narrative, which isn’t always so obvious when I am making my own selections of my work. My perspective is more objective, while Miwa’s methods are more involved with telling a story. It is more emotional. It adds context to the images that I did not have, Miwa was attracted to images of couples, and this creates a sort of adolescent love story with the photographs.

“A boat is also small and fragile. It’s about my life and the way I work with photography – it’s freer, more spontaneous and unexpected.”

Were you ever concerned by giving control of your work to someone else?

I gave Miwa over 200 images that I had already selected, and she chose pictures she was attracted to; they became the foundations for her narrative. I was interested in seeing someone else manage my work because I had never let anyone else create an edit of my pictures. And I was immediately receptive to what Miwa had chosen.

This reminds me of Winogrand. A case where a photographer’s archive is mined heavily in the absence of the “author.” I read that nearly half of the images in the current SFMOMA retrospective were previously unpublished, and perhaps not seen by him. This idea of archives would seem to be a uniquely photographic predicament. It’s somewhat unsettling, because the publicizing of unknown material can alter the intentions or “eye” of the photographer.

I was aware that Miwa’s American perspective may be imparted on her selections, but I was confident in her ability to deliver a cohesive interpretation of the work. I was willing to say “yes” to whatever Miwa delivered. She was extremely passionate about Slow Boat, the predecessor to Twin Boat, and we were eager to have the opportunity to work with each other. It was a rare and amazing experience for both of us, for her to edit my pictures and for me to revisit an earlier part of my career. Miwa’s intentions were to use the first book as a guide, but she was interested in creating something new. The outcome is a book of my pictures, but it is based on Miwa’s influence and a realization of her unique decisions. The selections have a greater intimacy than earlier presentations of my black and white pictures, because Miwa was interested in creating something more immediate.

Having discussed the idea of a narrative with Miwa’s selection, I was often struck by the cinematic qualities of individual images. That there could be stories and personal associations projected onto any one of the pictures. Do you see an overlap with the cinematic?

Free associations are a very important part of my work, so there is a definite overlap with cinema. When taking photographs, I intend to be as objective as possible, and let the viewer interpret the photographs based on their own experience with the work. It can be like you’re having a conversation and it can be about whatever you like.

“Published ten years after the release of Onaka’s seminal book Slow Boat which made him internationally recognized, Twin Boat from new Japanese publisher Session Press is edited from work produced at the same time “In this sense, the two volumes could be considered fraternal twins. Whereas slow boat is akin to an older brother, twin boat is its’ little sister, at last welcomed into the world a decade late.” (Artist’s statement)