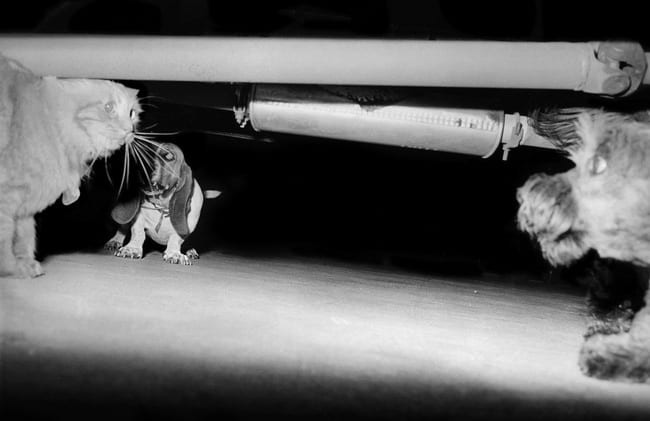 Sometimes the subjects in Michael Jang’s photographic time capsule, “The Jangs,” perform for the camera: Uncle Monroe decked out in his golfing gear, reclines on a shag sectional like a suburban Odalisque. Elsewhere, they seem unaware of the young photographer documenting their domestic routines and occasional outings: think of his mom’s anxious smile as she stands alone at the center of a cocktail party. In the Jang’s house, nearly every surface is decoupaged with visual cues that both acculturate the viewer and timestamp the photographs. A Vietnam-era bumper sticker reads “P.O.Ws never have a nice day;” an R. Crumb cartoon, hung above a bedstead, encourages the Jangs to keep “truckin’ on down the line.” And they do. Throughout the house, images of TV beauty queens, rock bands, football stars and even the Jangs themselves—seen in a staged family portrait thumbtacked above the washing machine—all suggest various poses that the family might try to adopt as they improvise their lives. If the Santa Claus costume worn by one of the Jang children on Christmas Eve seems incongruous with fact that he is Asian American, no one seems to notice. Yet set against this backdrop of Brady Bunch interiors, the Jangs are occasionally caught on film in that awkward place that lies somewhere between posing and repose. Such images reveal otherwise private moments of vulnerability, inviting a troubling empathy and a knowing smile. If we sometimes have the uncanny feeling that we recognize a face in these pictures, it’s perhaps because we’ve caught a glimpse of our own face, finally, as only others can see it. After a time, this mutual recognition dissolves into laughter.