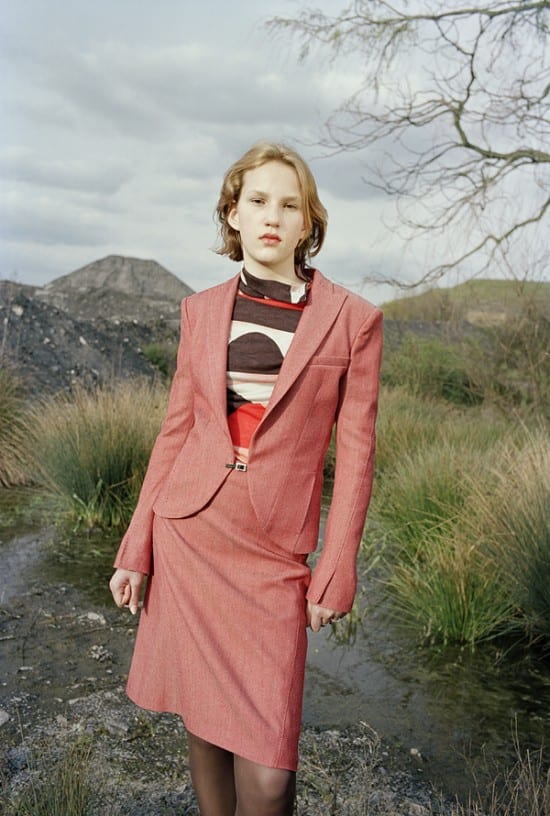 Jitka Hanzlová’s first retrospective exhibition in Britain unifies eight of Hanzlová’s photographic projects via an understanding of their common concerns: that is, what place means to the individual. The exhibit begins with Rokytník, a photo-series which documents the village inhabitants of Hanzlová’s familial homeland, a place she had not returned to for eight years (Hanzlová defected from Czechoslovakia to Essen, Germany in 1982, returning with the collapse of the communist regime). Absorbed in muted tones, these portraits and quiescent scenes of an everyday rurality create a sense of reflective nostalgia, as Hanzlová is both caught between belonging inside of the community and observing it from outside.

These are poignant documents about the act of returning and an endeavor to belong. It is mostly because Hanzlová seems concerned with reticent every day scenes that she inevitably evokes an idyllic time of stasis, concerns that liken her work with the nostalgic. Rokytník, as with many of Hanzlová’s portraits exhibited at the SNPG, isolates these moments with full knowledge of an outside. It is this outside that embodies nostalgic representation, as the past—Hanzlová’s hometown—is conjured up as both harmonious and distant.

In Bewohner, a set of photographs which were taken in European cities after her re-settlement in Essen, urbanity is seen as highlighting the individual’s isolation, with animal and human subjects appearing uneasy or vacant in their urban environments. They develop further Hanzlová’s exploration of belonging in correspondence with Rokytník’s rurality, opening itself to critiques of modern society and our place within our cultural surroundings. The most symbolic image on display here, for example, a shot of a peacock boasting its feathers, appears heavily de-individualised from the confines of a city zoo, as the cage above and concrete below restrict its beauty to the quotidian. It is with Forest, the next exhibited series, however, that Hanzlová is able to really invert these themes of identity and belonging hitherto explored.

No longer looking in, Hanzlová penetrates the Moravian woodland of her childhood—oblique, dark and mysterious—documenting the dimly lit interiors of the hushed forest floor. Open passages are obscured by elements of overshadow, mist, pale light or snow, as the pace of the forest and its timeless pulsations offer Hanzlová a primordial solace from time as appropriated with man. Rather than nature as known and conquered, we have in Forest nature at its truest: recondite and unfathomable. Strands of these feelings are present ever yet in an ongoing project Flowers, a truly fascinating set of still-lifes that harken back to a strong tradition of photography. Yet, with each object gently illuminated in the dark, we are reminded of the delicacy, mystery and melancholia in all life, as exoskeletal flowers are presented as if on the cusp of death, revealing the imperfect details of their botanical make-up.

Vulnerability and mystery seem to permeate Hanzlová’s portrait work as well. Hanzlová moves away from personal environments and subjects, to those with whom she has no relationship. With Brixton, Here and There is Something I Don’t Know, Hanzlová is on the outside looking in. This allows her to approach her subjects directly, but the outcome is hardly evocative. This is due in part because Hanzlová reduces her sitters to the same deadpan stare. It is the background alone, mostly natural, that nearly frees her subjects from certain anonymity. However, as our eyes search for a characteristic of their identity there too, we find very little detail.

Hanzlová’s work is fittingly displayed as a narrative of identity and place. Though these are most successful when linked with the socio-political background of her own migration, her later portraiture tackles the very nature of the medium itself. As with Forest, the facial expressions and postures align her work with a timelessness that, if anything, works against its presence in Forest, by presenting subjects who bare nothing. Composed and direct, Hanzlová’s later portraiture progresses away from her earlier photography, as the nostalgic reminders of the everyday in an environment on the cusp of change, switches to a peculiarly banal modern world. Just how our socio-economic conditions and our culture shape our concept of identity and place seem to be the prevailing questions here, all of which will resonate clearly with its British audience.