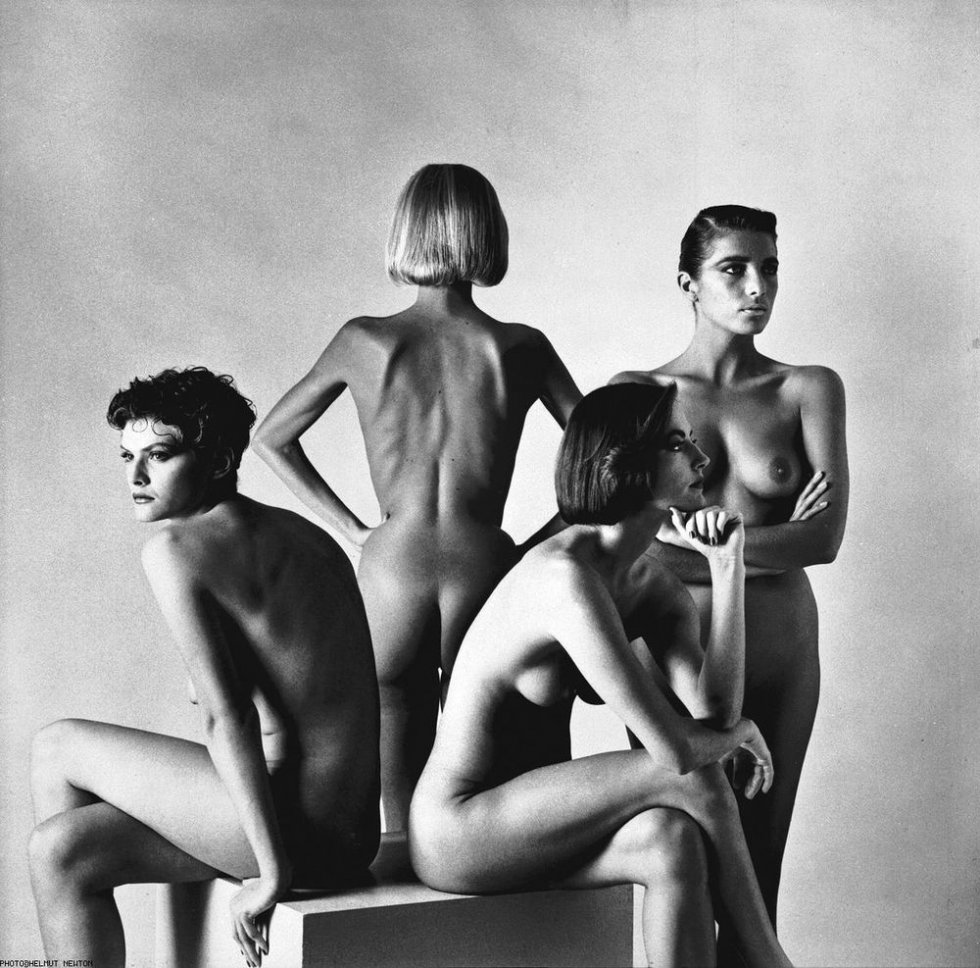 The pigeonhole never suited Newton: His revolutionary ability to merge what we have come to define as photographic genres is in full swing in both White Women and Sleepless Nights where ‘Hitchcockian’ cinematic moods and the photojournalistic street aesthetic are merged into the fashion image seamlessly creating a multi layered discourse.

Helmut Newton’s life is frequently described as the apotheosis of fame, craft and glamour. He arrived in Paris for his first major assignments in a white Porsche and died crashing into Chateau Marmont on Sunset Boulevard in 2004 aged 83. His highly publicised show at Palazzo delle Esposizioni in Rome – a towering and imposing structure designed by Pio Piacentini- aims to showcase the lifelong achievements of the German photographer by highlighting three of his early and most successful publications: White Women, Sleepless Nights and Big Nudes. The exhibition, purposely divided in three sections, follows the chronological timeline of the volumes, presenting over 200 of Newton’s most emblematic and iconic prints. The curatorial guidelines follow a rehearsed mantra set years in advance by Newton’s wife, Alice Springs and effectively propagated by his highly successful Foundation based in Berlin. Each section is astutely differentiated by the choice of colour applied to the walls, whilst giant silver lettering, bearing the publication’s title, welcomes the aficionados.

The selection exhibited from White Women (1976) is presented in the largest of the three rooms, functioning as an introductory condensation of Newton’s practice. Neatly arranged on the dark purple walls are the cornerstone features that distinguish his imagery, the foundations to his success and subsequent status as pioneer and grand provocateur. Particular attention is given to the revolutionary alignment of the female nude to the outdoor fashion image, a repetition central to the development of Newton’s patinated eroticism. The edit from White Women and Sleepless Nights (1979), somewhat surprisingly, incorporates an even mixture of both Newton’s signature black and white and his less favoured, although highly suggestive, saturated colour images. Opposite the celebrated Vogue commissioned series ‘Rue Aubriot’ is the photograph of Laura, draped in a voluminous fox-cape, her pale naked body lit in the Parisian night by Newton’s strong flash. Laura is the epitome of Newton’s obsession: The, beautiful, powerful and fetishized woman. Not far, a black and white image of a young and bearded Karl Lagerfeld in a ‘mankini’ on a Saint Tropez bed (1973) poignantly reminds us of Newton’s wit and deep understanding of the central role played by the photographic medium in the aesthetic construction of fame and iconic status.

The pigeonhole never suited Newton: His revolutionary ability to merge what we have come to define as photographic genres is in full swing in both White Women and Sleepless Nights where ‘Hitchcockian’ cinematic moods and the photojournalistic street aesthetic are merged into the fashion image seamlessly creating a multi layered discourse. On the blue walls of Sleepless Nights, is the large vertical ‘Central Park West’ (1977), the embodiment of Newton’s unorthodox versatility and noir mise-en-scenes: A blonde woman lies face down on a large balcony overlooking a Manhattan crossroad. Photographed from the floor above, her lifeless naked body shimmers in the sun crumpled on a red carpet, her arm in a painfully unnatural position. Clues in this glamorous crime scene are ambiguous, a broken chair, shards of glass from a broken bottle and a single yellow high heeled shoe, all signs of a possible altercation. Taking a page out of Michelangelo Antonioni’s Blow Up (1966), Newton allows the enterprising eye to dig deeper. Upon taking a closer look, barely in the frame, is a male hand propped on the balcony’s railing, suggesting an unusual reversal of power relations in Newton’s femme fatale dominated imaginary. Furthermore Sleepless Nights caters to the frequently discussed surrealist and fetishistic aspect of Newton’s imaginary, where props – guns, chains, casts and orthopaedic corsets – adorn and serve the menacing desires of his overpowering, mischievous women. 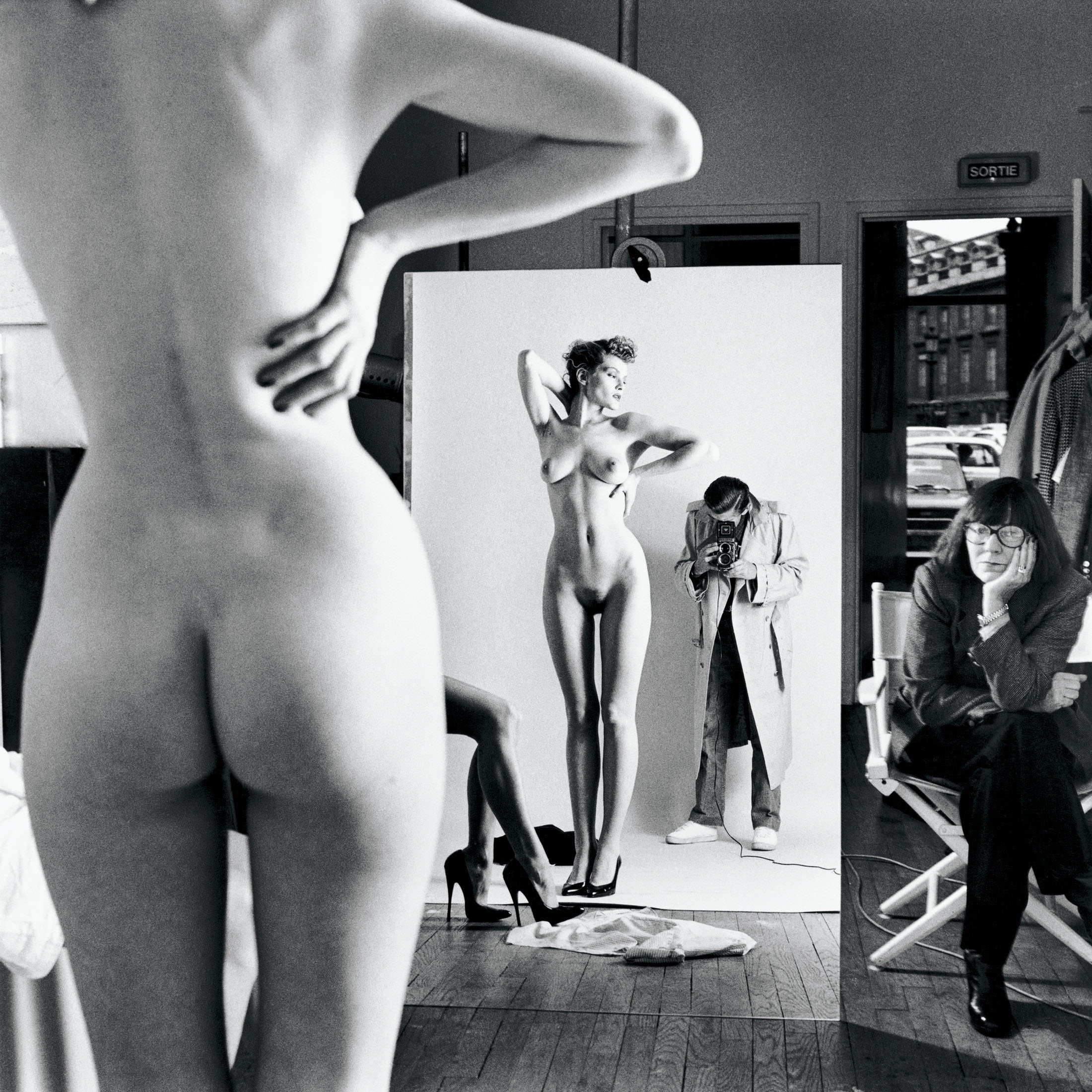 Ironically the smallest of the three rooms is dedicated to Big Nudes (1981), the consecration of Newton’s genre-defining style. The scale of the prints inspired by enormous German RAF recruitment posters mark his arrival as a Fine Art gallery favourite. On the turquoise walls, numerous larger than life ‘Big Nude’ prints accompany the clothes off/clothes on mirror diptych ‘Sie Kommen’. It’s go big or go home for all: narrative, production, operator and subject.

Somewhat of a demigod for the provocative genre in fashion, Newton should be always deconstructed in a historical context so as to avoid falling into the common trap of time based comparison by aligning his imagery with the current fashion landscape, dominated by gratuitous aesthetic provocation and the constant portrayal of unobtainable ‘perfection’. When analyzed today by an untrained eye, Newton might be dismissed as a simple tassel in our oversaturated photographic chaos. This of course is a retortion enabled by his genius, a result of his profusely imitated aesthetic. Simplistically put, Newton’s work falls in the small circle of the ‘genre defining’, accompanied by unanimously timeless masterpieces from different contexts- eg. Ridley Scott’s ‘Alien’ (1979) – and cult figures from within the photographic medium itself such as Arbus and Sander. As the famous bearded man in the ‘mankini’ cleverly reassumes: “His pictures have survived better than the fashion they were meant to represent or illustrate.” (Karl Lagerfeld).

Niccolò Fano was born in Rome, Italy in September 1985. He studied art and design (BTEC National Diploma) at the University for the Creative Arts in Canterbury and holds a BA in Photography from the UCA in Farnham. He recently received his Masters degree from Central Saint Martins (2010)