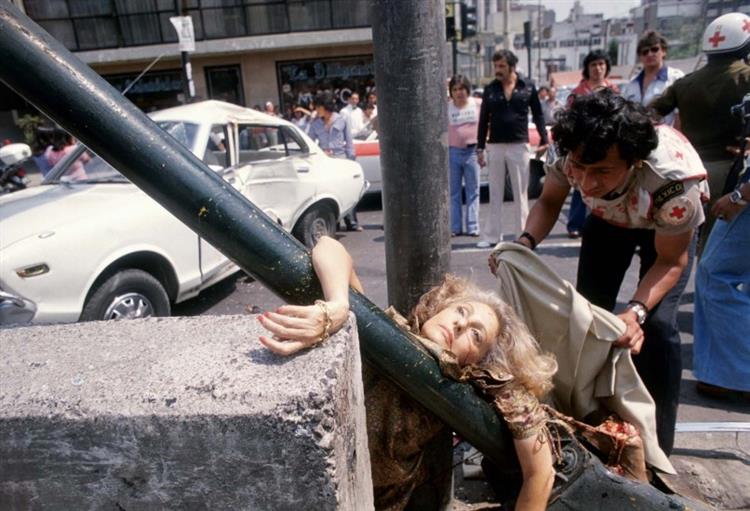 Despite their often gruesome content, it is fascinating and often too easy to look at Metinides’ pictures. In the same way that many of the photographs depict audiences amidst tragedy, we too become spectators of the event.

In an age of unparalleled media saturation, the diversity of ways we experience tragedy, real, imagined, or virtual, have risen exponentially. Enrique Metinides (b. Mexico City, 1934) was a media photographer for over fifty years. Working for Mexico’s infamous nota roja crime magazines, he chronicled the gore and grist of life, and has often been called the Mexican Weegee. The exhibit at Aperture Gallery, 101 Tragedies of Enrique Metinides, is a dossier of planes, trains, cars and trucks, shown crashed, crumpled, submerged, and on-fire. There are broken limbs, gunshot wounds, electrocutions, drownings and suicides, among other unfortunate events.

Aperture’s exhibition is a selection of choice images. It is the first time Metinides has curated his own work. Many of the photographs are accompanied by captions, explaining narratives and providing commentary by the artist. The presentation is a collaboration with the curator and documentary filmmaker, Trisha Ziff, who worked with Metinides for six years to develop the project. It was first shown at Rencontres d’Arles Photography Festival in France in 2011, where discussion with Aperture began about a book and a New York exhibition.

Despite their often gruesome content, it is fascinating and often too easy to look at Metinides’ pictures. In the same way that many of the photographs depict audiences amidst tragedy, we too become spectators of the event.
Our willingness to spectate originates in our relentless curiosity, which is the foundational element of our media obsessed culture. We view catastrophes from estranged distances, and are intrigued by nightmares that are not our own. Susan Sontag remarks in On Photography, “Surrealism lies at the heart of the photographic enterprise: in the very creation of a duplicate world, of a reality in the second degree, narrower but more dramatic than the one perceived by natural vision.” Metinides’ has noted the influence of cinema in his work, where compositional elements are consistently used to heighten the significance of events. These aesthetic decisions skew and infect the realities that are being depicted with a greater immediacy and an enhanced poignancy.

A woman contemplating suicide on the 27th floor ledge of the modernist Torre Latinoamericana, could be a deleted scene from a Hitchcock film. A cinematic narrative is formed in two-photographs of a drowned man on the edge of a pool surrounded by onlookers, and a grainier image below showing his lifeless body still under water. In Metinides’ photographs, the diversity of tragedy seems too strange to be anything but plots that are formed in the minds and budgets of Hollywood studios. 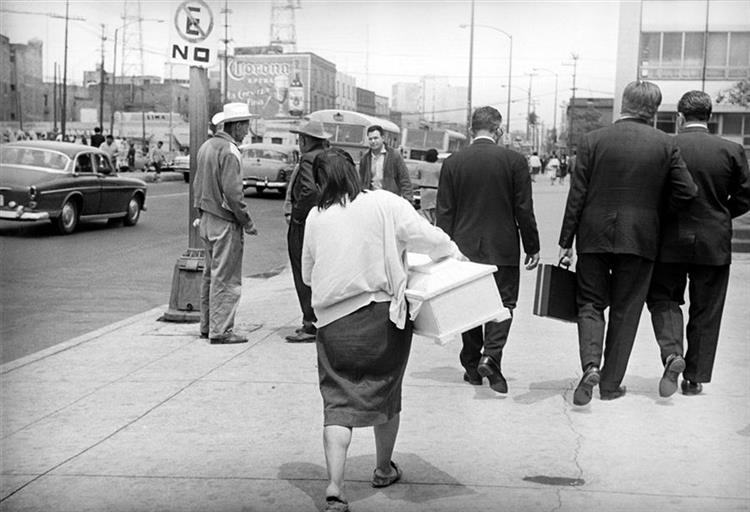 Col. Doctores. Niños heroes, Mexico City, 1966 (This woman did not have money for a coffin for her child who had been killed.)

We learn that a woman carrying a small white coffin down the street, is a mother carrying her’s son casket after the sympathy of others paid for what she herself could not afford.

It is alarming to realize that an image of the collapsed Regis Hotel in Mexico City, downed by a 1985 earthquake, is a spectacular chronicle of chance. Alejandro González Iñárritu’s film Amores Perros, also set in Mexico, has eerie similarities to Metinides’ photographs and to the coincidence of documentary photography. The film begins with a car chase and horrific accident. Subsequently, we jump to the past and navigate through the circumstances that will prompt the opening sequence. Metinidies’ photograph of journalist Adela Legarreta Rivas, lifeless and contorted with her face against a pole, has haunting similarities to Iñárritu’s film.

Captions compliment our understanding of the photographs, and their implied narratives. We learn that a woman carrying a small white coffin down the street, is a mother carrying her’s son casket after the sympathy of others paid for what she herself could not afford. The scope of tragedy is wide-ranging, and circumstances are not always plagued by grief. An image of a boy with striking wide-eyes is shown looking cheerfully at a collection of small toys in his hospital bed. He was abandoned and then hit by car eight-weeks earlier, breaking both his legs, but is shown fully-recovered and soon to be discharged.

While speaking about the project, Trisha Ziff discouraged thinking about these ills as being exclusive to or more common in Mexico. Instead one should focus on the randomness and fragility of our society. Tragedies can happen anywhere. Metinides’ images are unique in their ability to capture critical moments. Here, Roland Barthes’ fabled punctum yields a punch instead of a prick. 101 Tragedies of Enrique Metinides is an evocation of the photographer’s interest in depicting tragedy and satisfies our media conditioned appetite for this type of imagery. In the caption for a rather straight-forward image of a car crash, Metinides responds to the throngs of onlookers with, “People love drama, and like to look at accidents. They love gossip, being nosy, interfering. That’s why there is always an audience for these dramas, these spetaculos [sic]!”