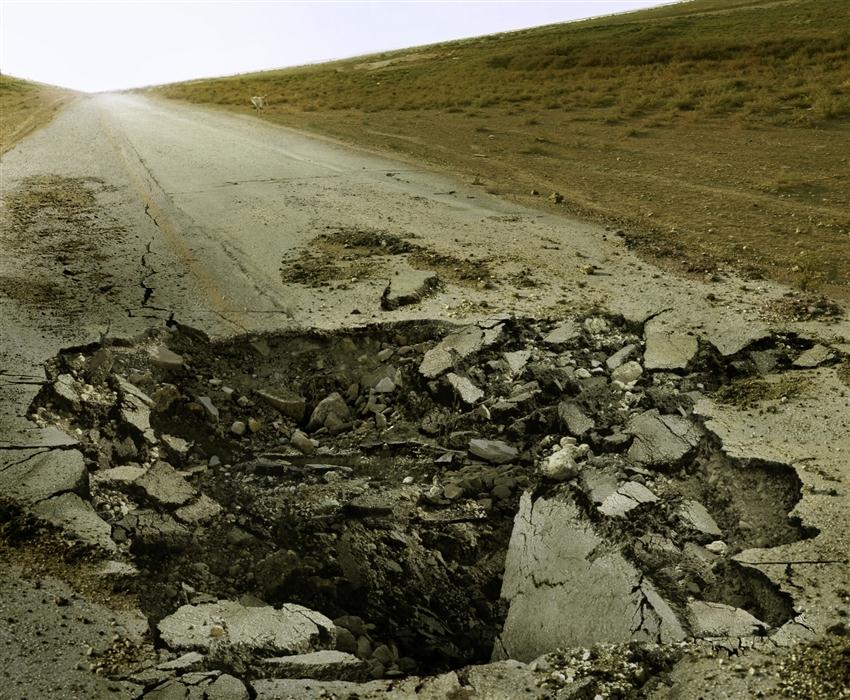 By Bruno Vandermeulen, Danny Veys, excerpt from Imaging History. Photography after the fact, 2011

The French artist Sophie Ristelhueber arrived in Kuwait seven months afater the war had ended, photographing aerial views and close-ups of the desert after the battle. The original title for this series, Fait, has a double meaning, translating both as “fact” – what the documentary images supposedly contain – and ‘what has been done.’ The ambiguities multiply, as Fait straddles the border between the document and artwork, evidence and abstraction. It also insists on a material parallel between the ground and the photographic film. This doubling of the index confirms Campany’s characterization of late photography as “an overtly allegorical mode of photography. The images present themselves as fragments not wholes” (Campany, 2006). However, this is not merely a gesture of self-reflexivity, but to acknowledge that events can’t be represented in their entirety. Though the traces are evident, their cause remains unexplained. This deferral of knowledge in turn heightens a fact of every image – that it never tells the whole story. Then again, the tendency toward opacity and fragmentation can be criticized for favouring aesthetic gratification before analysis, removing atrocities from their sources and turning them into abstract configurations.

Ristelhueber further provokes this skepticism by citing an iconic work of high modernism as the key influence and inspiration for Fait: Man Ray’s photograph Dust Breeding, taken in Marcel Duchamp’s New York studio in 1920. This mysterious and evocative picture resembles an aerial reconnaissance photo of an arid desert. To support this reading, it was captioned View from an Airplane when first published in the Surrealist journal Litterature. In reality, the photograph was the result of a two-hour long exposure framing a segment of Duchamp’s artwork The Large Glass (1912-1923) after layers of dust had gathered over many months. Beside Ray’s and Ristelhueber’s shared fascination with ambiguous subjects and scales, there are also deeper running thematic concerns at work here. Deliberately confusing the surface of the glass pane with an expansive desert landscape, Man Ray’s photograph invokes a parallel between the gathering of dust on the glass surface, the photographic exposure, and the forces shaping the earth’s crust. Dust accumulates and is swept away, just like the marks of trenches, tank tracks and bomb craters in Fait were first inflicted, and then erased, by ‘Desert Storm’.

On the one hand, the aloof and distanced viewpoint adopted in Fait seems to reduce manmade suffering to the inevitable outcome of an unceasing cycle of eruption and erasure. On the other hand, it encourages us to look at conflicts in other ways. The determination to cover the ground in late photography is also a challenge to the imaginary domains of Heimat, Holy Land, and Founding Fathers, confronting these abstractions with matter, with what is overwhelmingly present, with the dust that settles and the rubble and ruins that pile up day-to-day. As a response to the media coverage of the war that impelled Jean Baudrillard to make his notorious claim that “the Gulf War did not take place”, Fait insists that events do take place. Engaging with contemporary war zones through the Surrealist legacy of depaysement – the strategy of displacement and disorientation epitomized by Dust Breeding – this taking place occurs on sliding scales in Ristelhueber’s record of the collateral damage of history: the earth and the body. 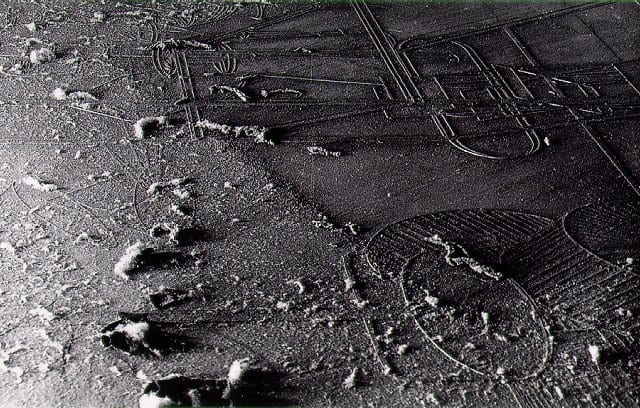 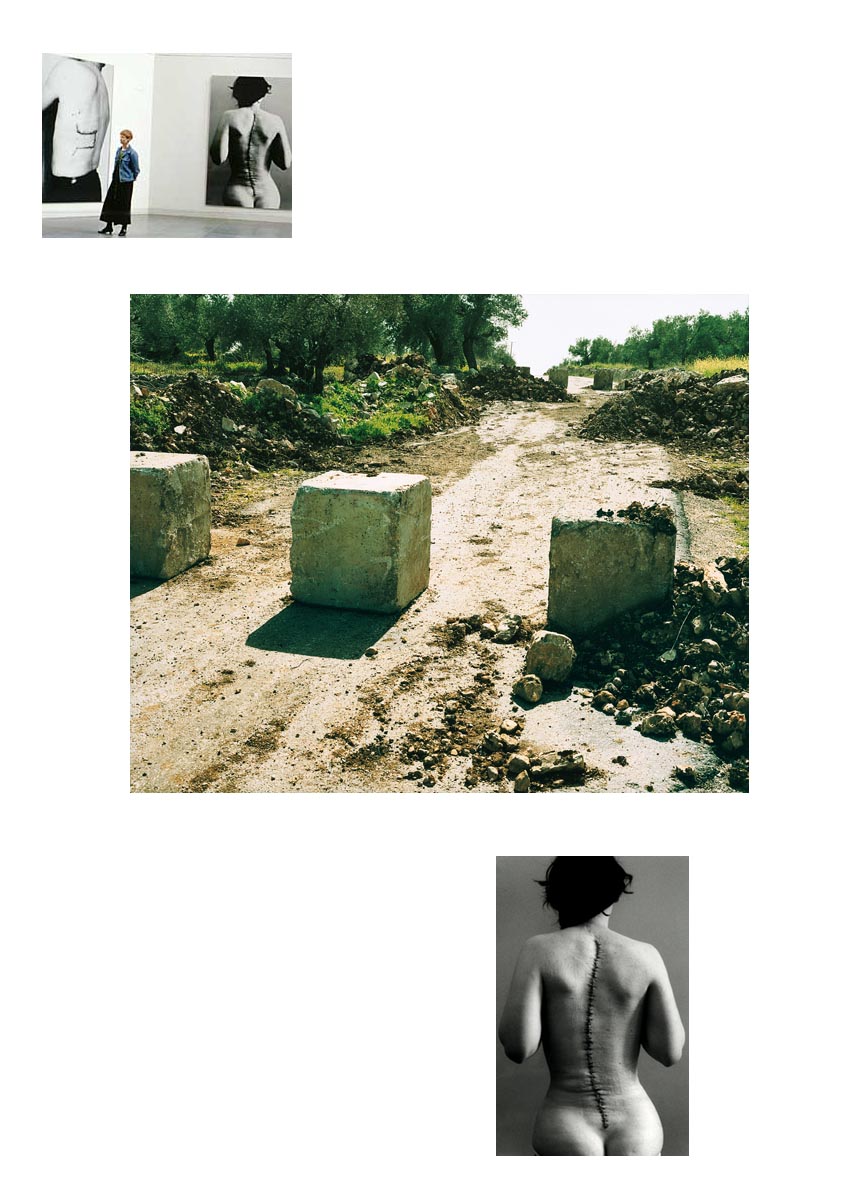 Sophie Ristelhueber, images and installation images from Fait, WB, Eleven Blowups, Every One

The physical scars in the earth exposed, but not explained in Fait, are echoed in the scarred bodies in Paris hospitals that Ristelhueber photographed for her next project, Every One (1994). The series consists of large-scale close-ups of fresh surgical stitches. Like the terrestrial images of Fait, the frames sections of human flesh remain oddly anonymous and enigmatic. The sheer size of the prints confuses the distinction between figure and ground. Reversing the optics of Fair, the wounded tissue assumes a geological dimension. As the split between Every and One instructs, these images are at once general and singular, at once allegorical and material.

In her more recent work, Ristelhueber has explored this logic of substitution and exchange between the terrestrial and the corporeal in conjunction with the leitmotif of late photography, the path of war that harkens back to Fenton’s iconic The Valley of the Shadow of Death. WB (2005) consists of fifty-four photographs of roads meandering through the gentle hills and groves of the West Bank. Each image is a variation of the same motif: a road deprived of its destination, cut off by some physical obstacle – a pile of rocks, a mound of gravel, or concrete blocks. Further amplifying this theme, WB was followed by Eleven Blowups (2007), a series of digitally manipulated stills drawn from video rushes of roads scarred by bomb craters. In the words of the artist: “What prompted me to make these pictures was the impression that the ground was ripped by the shock, that it was swallowing itself” (Ristelhueber, 2009). In these pictures, the earth appears to react like a body to the violence inflicted upon it, the craters resemble open wounds, the blasted rock and melted asphalt takes on a visceral form.

Repeating the same image over and over again with minor variation, WB and Eleven Blowups speak of the fraught temporality that informs late photography. These typologies of scattered and impassable roads apparently lack finality. That is the nature of the catalogue or list; it has no beginning or end. This image not only repeats itself, it also recalls other images, like those barren trails in Crimea, Afghanistan and Nordlager Ohrdruf discussed above. It is an image that keep coming back across vast geographical and historical scales. It keeps coming back because it’s a world we can’t project ourselves out of.

Sophie Ristelhueber, images and installation images from Fait, WB, Eleven Blowups, Every One