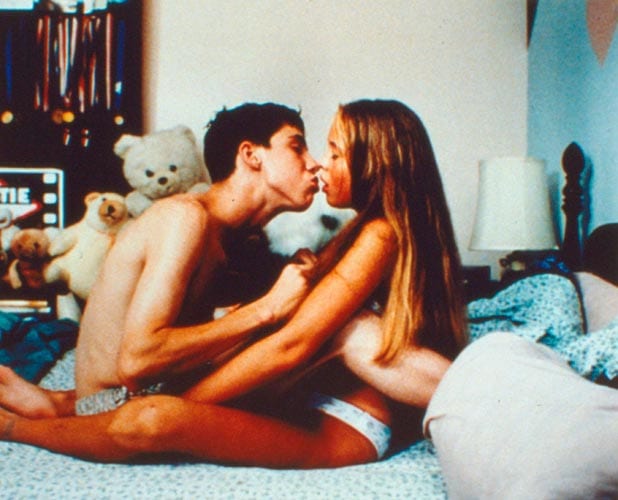 You have seen their faces. In the core of every American city young kids wander the streets getting stoned, spare changing, fighting, scratching, and hanging out. They wear tribal badges: tattoos, camo clothes and skin heads, skateboards and phat pants, black clothes and vampire makeup, rainbow hair and flesh pierced with jewels, gold rings or safety pins. They haunt the urban tenderloins that offer single room occupancy hotels, soup kitchens, parks, squats, and prostitute strolls. If you haven’t seen them in real life, you may have seen representations in the photographic work of Larry Clark including the movie Kids, or in Jim Goldberg’s extended photo essay Raised by Wolves. Both these texts are efforts to make visible the disaffected street youth of the 1990’s.

Larry Clark’s film Kids was released last summer. The script, written by nineteen year old Harmony Korine, is structured as “a day in the life,” and the kids’ activities are depicted almost entirely visually. Using the cineme verite tropes of “real” locations, available light, and hand held cameras, we are shown cliques of skate punks foraging for sensation sex, drugs, and violence—in a sharply focused urban landscape. A thin plot device is employed to provide the film with dramatic tension. In the first scene we watch Telly (Leo Fitzpatrick) suck face with a barely pubescent girl, persuading her to go all the way. After the seduction Telly rejoins his male friend who has been hang- ing around outside the girl’s house waiting for Telly to come. In mumbled conversation, Telly brags of devoting his life to deflowering virgins and for the rest of the film he seeks his next conquest. In the second plot device, Jennie (Chloe Sevigny), one of Telly’s earlier sex partners, learns of her positive HIV test. The film observes her search for him, presumably to warn him of his disease and to keep him from infecting any other girls. When she does find him in the arms of his latest, the warning seems pointless and she is too weary to bother. The plot, of course, is not the story Clark set out to tell.

Along the way the camera is fascinated by what Clark perceives as la vie quotidienne of teenage life: Telly stealing money from his mother, a black man beaten bloody and unconscious with a skateboard, of kids skinny dip- ping, wandering the street, drinking and pot smoking, and so on. This is what Kids is really about.

Terrence Rafferty, reviewing Kids for the New Yorker, wrote: “Clark isn’t didactic, or even particularly analytic: he merely observes—an anthropologist documenting the rites of a newly discovered tribe.” Indeed, the story is told with the camera. As in Clark’s earlier work, Tulsa (1971) and Teenage Lust (1983) the camera’s matter-of-fact, non judgmental and perhaps even “objective” stance is employed to establish brute facts and thus to imply veracity. He witnesses and wants us to see the “truth” that kids play with guns, play with needles, play with each other. Clark’s unblinking camera records everything that lies on the surface but unlike the anthropological goal of understanding “the native’s perspective,” we neither see nor hear the meanings, motivations, expectations, or understandings of these kids. Photography merely depicts bodily functions: sex not love, violence not hate. The position of Clark, the observer, may be objective but it is not dispassionate. Tulsa was unabashedly autobiographical, Teenage Lust not only ends with a twenty seven page interview with himself, but included clipping of his run-ins with the law and self-portraits of an ageing Clark with the teenagers he photographed. The observer was not neutral but is in love with heat, with the sensation of “teenage lust,” with the rush of drugs and the image of his own lost youth. 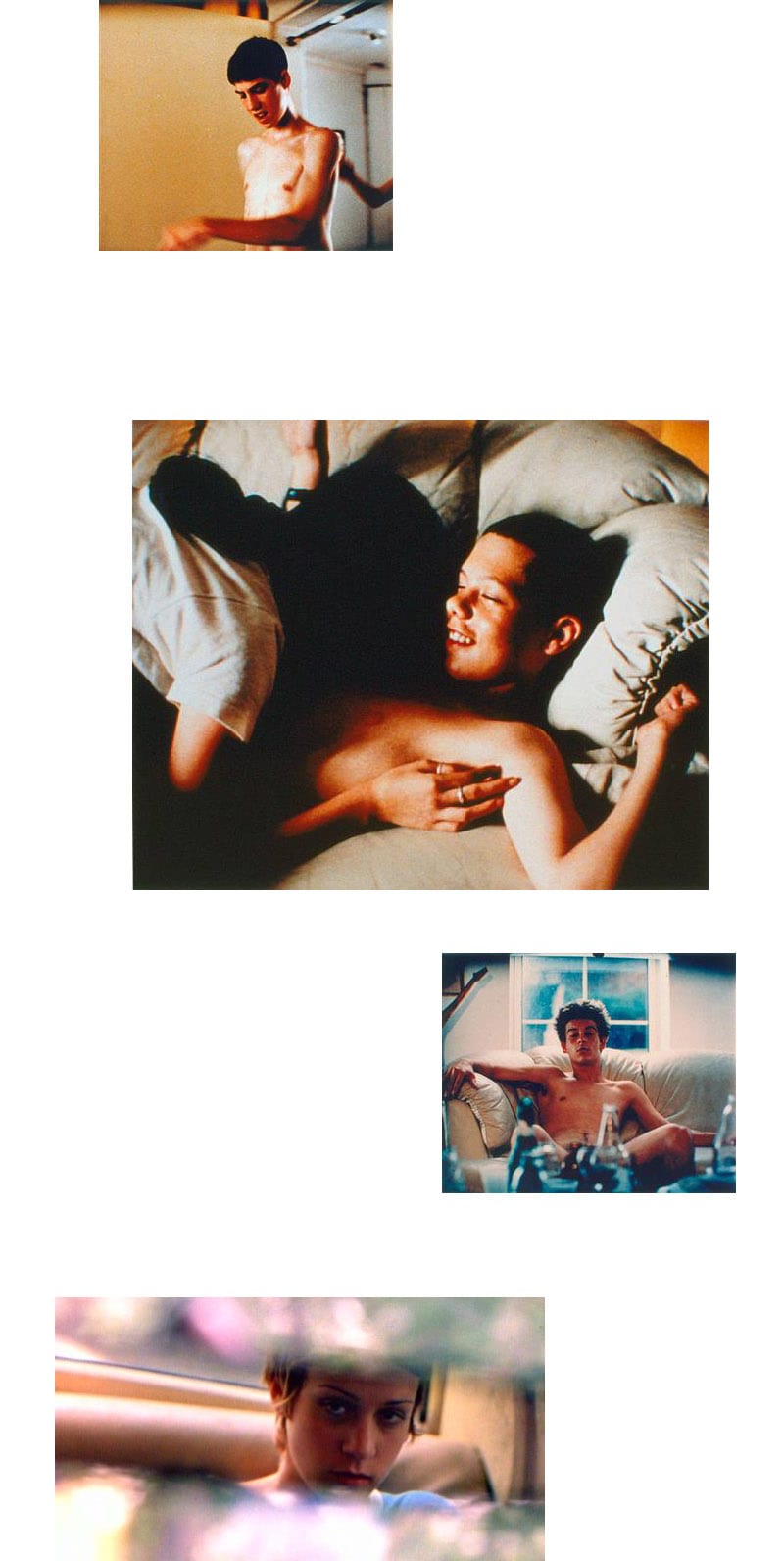 While some of the youth in Kids are shown to have homes, the photographer Jim Goldberg’s chosen subjects are runaway, castaway and homeless street youth. Raised by Wolves similarly assumes a non-judgmental documentary stance but is not nostalgically romantic. Interestingly, where Kids was fiction passed off as documentary, Raised by Wolves is documentary that employs literary devices to fictionalize and distance itself from a painful reality. Informants and subjects are presented as a “Cast of characters” The book opens with an image of television static and a quote from the main subject (key informant?), Tweeky Dave: “Damn girl, its only a story. Its not real. And don’t worry, there is a happy ending.” Presumably this is meant ironically for Dave dies in the end, but of course the choice to end the book with death was itself a literary device. It brought closure, making a story of the unending way of life on the streets. Unlike Kids, Raised by Wolves employs the familiar “coming of age” plot used in most work on teenagers. Over the course of a decade photographing street kids, Goldberg followed two lives in detail. Echo (Beth) and Tweeky Dave begin as a couple, have a stormy relationship and break up. She finds someone else, has children, eventually leaves the street and ends up struggling with working class life. Dave’s descent further into drug addiction and street life is chronicled, not only by Jim Goldberg but by other producers for television like West 57th Street. In the end Dave dies of hepatitis and liver failure.

During the on-again off-again decade of contacts with Dave and Echo, Goldberg reveals a number of the roles he played: documentarian, father, confessor, friend, advisor, and helper. In the text he tells us of money lent and collect phone calls accepted, and he voices his frustrations over choices made by Dave and Echo. His stance is not voyeuristic or objective in an abstract sense but is that of the engaged researcher. He clearly cares about the lives of the young people he chose to become involved with, and about the difficult decisions of how to capture and render the substance of their lives. Goldberg avoids the trap of letting his photographs “speak for themselves” by employing a number of highly effective ethnographic techniques: he included excerpts from field notes and interviews, he asked his subjects to write about their lives and included excerpts (and some extensive works) in their own hand writing, he gave copies of his photographs to the subjects and shows them to us with annotations and comments written on them, and he showed the subjects the manuscript as a work in progress. All of this commentary helps us to understand the images, and see the kids’ lives from their perspective. The reader is able to make one kind of sense because we perceive the field of possibilities within which choices are being made. To a remarkable degree, the “native’s perspectives,” the understandings, expectations, and motivations that are missing in Clark’s work, are present in Goldberg’s.

The camera recorded physical events: (we see a photograph of Echo [Beth] pregnant and smoking). Field notes add necessary social and historical context: (“Echo has been off tweek for over three months, a hundred and one days exactly. She is now six months pregnant and is due around Christmas”). Interviews provide understanding of how people feel: (R. Silvia (Beth’s mother): “…I’ve seen how he manipulates Beth, gets her to take care of him. She’ll go out to get him a candy bar, like he’s helpless or something. Then she gets resentful and yells at him so much that she looses her voice. I’m deter- mined to do anything to make it easier for Beth to come home. She says she loves him, so, against my better judgment, I have agreed to let him return with us. In my heart I wish Twack Jack and all these people were locked away or dead”). And Jim Goldberg (1995: 285) keeps us informed of the uneasy position of the observer: (“Part of me wants to tell R. Sylvia that Echo is still dealing, Paul is counting drug money, Bridget is four months pregnant, those dumpster diving people are all her daughter’s friends, and bringing Echo and the baby home might not work…” ).

from Raised by Wolves, Jim Goldberg

Goldberg’s triangulation of data is a vast improvement over the uninterpreted images of Larry Clark. But in the end the readers/viewers of Clark’s and Goldberg’s texts are left to their own devices. The carefully contrived objectivity and non-judgmental depictions paralyze us; they are the very antithesis of action. Before the turn of the century, Jacob Riis was making similar photographs to show us street arabs, opium dens and growler gangs. His piles of flash powder illuminated homeless kids sleeping in heaps, filthy squats, youthful gang members rolling drunks, and children lugging buckets of beer. The crusading Danish immigrant set out to put the lie to the adage that “One half of the world does not know how the other half lives.” He used the camera to thrust knowing in the viewer’s face, demanding to know: What are you going to do about it? (Riis, 1890 [1971:1-2]) Today we may find Riis’ modernism naive, his judgmental reformism oppressive, and his relations with the police suspect. Surely he did not concern himself with the “natives’ perspective.” But Riis had an analysis, a point, and a plan.

The world-weary photographers of today, no matter how soulful, seem ultimately as clueless as their subjects. What do we do with these expensive books? Read them and forget them? Flip through them backwards pausing at the occasional shocking or artistic image? On the back page of his book, where you might read if it were on the coffee table, Goldberg printed a letter from Beth in large yellow type on red:

The problem you are going to face, I think, is trying to bridge the gap between `society’ and the kids whose problems you portray. Very few people can cross that bridge, because they are uncomfortable with the fact that these kids are products of themselves. They would rather classify them and give them names like “victims of abuse, drug addicts, runaways, criminals, and mentally ill.” They don’t want to respect them for the people that they are.

Goldberg made a good job of the ethnographic mandate to respect his subjects and portray their sense and sensibilities. But he stayed safely on the kids side; he didn’t bridge the gap. Thousands of minor children still work the prostitute strolls, share dirty needles, go hungry with untreated diseases, get pregnant and raise their own children, shoot and cut and beat each other sense- less over real or pretended slights. As Beth so clearly observed, they are our children. As a society, shall we provide places for them to sleep or medical care? Shall we arrest them? Medicate them? Ignore them? The observer’s stance—photographic or ethnographic—has nothing to say. For guidance, at this point, we need to look back a century, to Jacob Riis and Lewis Hine, to the progressives and the child welfare movement. We need to employ our new found ethnographic understanding to develop practices that go beyond observation to social action.