Enrique Metinides started shooting crime scenes in Mexico City and publishing photographs in local newspapers when he was 12 years old.

Enrique Metinides started shooting crime scenes in Mexico City and publishing photographs in local newspapers when he was 12 years old. He is now in his 70s, and has an enormous body of work buried in fifty years of newspapers. For those fifty years, he followed ambulances and police cars to the scene of crimes that were sometimes still in action, or accidents whose fires were still burning. His photographs are visceral, sometimes lurid, and always challenging.

Series, from Kominek Books (2011) takes a unique and compelling approach to Metinides’ work by organizing his photographs of specific events chronologically. The pictures are broken into fourteen series, among them “Explosion,” “The Tower Suicide,” and “The Lovers of Chapultapec.” The book provides background for some pictures of his that are already famous, and also introduces many that are not iconic on their own but work brilliantly in sequence. It is large, printed on excellent paper stock, and its contents are sharp and beautifully printed.

The arrangement is effective, especially at illuminating this master of crime photography’s profound documentation of human reaction to accidents, their faces and postures after their lives have been twisted, torn away from what anchored them, and mutilated into entirely new forms.

A woman walks through the streets of Mexico City with her dead child in a white coffin. An old lady cries outside of her destroyed house in the center of a crowd. A woman in a bright dress sits with her face in her hands beside the body of her dead lover. 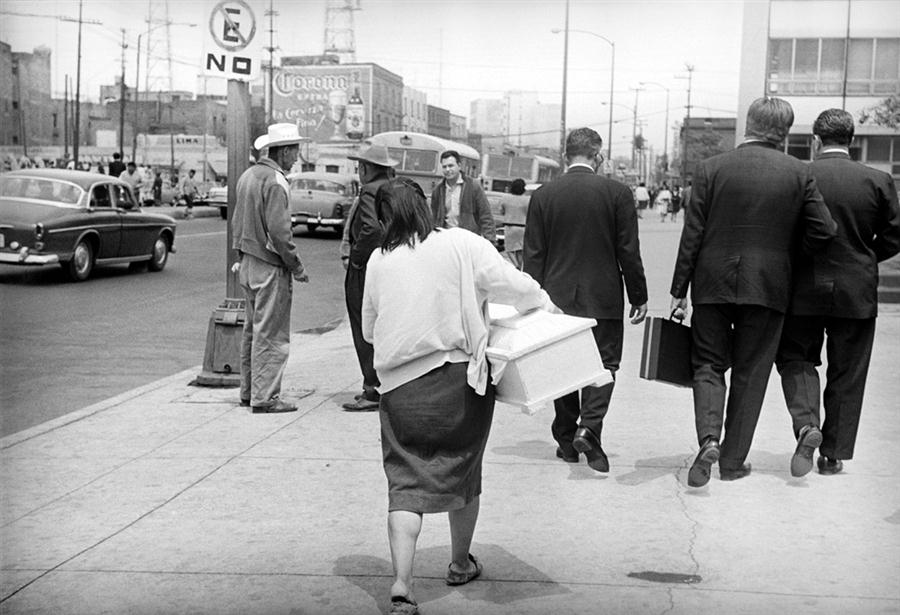 Secrets disappear, people mourn to no avail, the unthinkable unfolds and we, the viewers, watch.

Mexico City is a huge and fascinating metropolis. It is cosmopolitan and poor, stranded by tradition but always growing, changing, and shrugging off its old patterns. Metinides is one of its greatest documenters because he captures the tragedies any city produces with its brutal mechanized environment and juxtaposition of opulence and starvation. Few cities maximize those elements like Mexico’s capital, and no photographer documents them like Metinides.

His pictures contain a part of the world rarely seen, moments one typically would witness only as a participant, a victim. But he is there with his camera, watching the point where death and life meet. That point is an inevitable fact that Metinides unblinking eye reveals in its many forms. Secrets disappear, people mourn to no avail, the unthinkable unfolds and we, the viewers, watch. These are photographs of the end, redeemed by their artistry, which is made more apparent by the carefully edited Series.

In Series, they are less suited to tabloids for which they were taken, instead more compassionate for their continuity. Each scene is a given context, and those who have survived the accident or crime become the focus, rather than the blood produced. If you are interested in a careful presentation of Metinides’ work that reveals the city he worked in, the people he encountered, and the aftermaths he participated in, look no further than Series, a must have in our opinion.