Poppy claims to trace the Afghan the entire recent history of the opium trade, to describe trafficking routes and opium’s impact on millions of people. It claims to do all of this on an enormous scale; across 13 countries and with more than 17 years of on-the-ground reportage.

The list of locations and scope of coverage in Poppy: Trails of Afghan Heroin is comprehensive. Poppy claims to trace the Afghan the entire recent history of the opium trade, to describe trafficking routes and opium’s impact on millions of people. It claims to do all of this on an enormous scale; across 13 countries and with more than 17 years of on-the-ground reportage. This massive project is allegedly accomplished by only two people: Robert Knoth and Antoinette de Jong. However, the book delivers on its promise. Knoth and de Jong’s photographs and text reveal complex networks of clandestine commerce with skill, sensitivity, and compassion.

The the book begins in Afghanistan, where desperate poverty coupled with a corrupt political environment allow the country to produce 93% of the world’s opium and gain 54% of its GDP from trading it, usually after it has been refined into heroin. But, in a testament to this book’s vast scope, the first photographs were taken before Afghanistan was the world’s leading producer of opium. In the 1990s the Taliban were in power and they forbid the use, cultivation, and trafficking of poppy and opium. Cultivation exploded in 2001, when the Taliban was toppled by the US led invasion.

The authors visit Afghanistan three more times after the 1990s, along with many other countries, and these stories are told through both text and photographs which alternate in sections. Both mediums are intimately tied to the reporters’ lives, which enhances the book’s cohesion. For example, the second series of photographs of Afghanistan begins with this quote:

“Loose fitting trousers, wide, embroidered tops, a selection of headscarves, recording tapes, microphone tapes, flea-powder, broad-spectrum antibiotics, painkillers, vitamin pills. I am packing my bags for yet another trip to Pakistan and Afghanistan. I am thrilled to be going. Robert and I have prepared this for months, and now we’re about to leave for one of the most beautiful parts of Afghanistan. . . I’m watching CNN as I pack. It is September 11th, 2001.”

The accompanying text and photographs go on to describe and document the iron rule of the Taliban immediately before the invasion, the fury of Afghanis against the US and their delight at the successful attack of that day. Once the journalists leave Kabul for the tribal areas, they find a drought ridden landscape and thousands of starving people. There are villages littered with children’s graves, and columns of men and donkeys move across the famously rugged mountains in search of food distribution points because there is nothing left in their villages. The drought has gone on for years, and those most affected by it are not concerned with wars or regime changes. They do not grow poppies yet because the Taliban is still power. 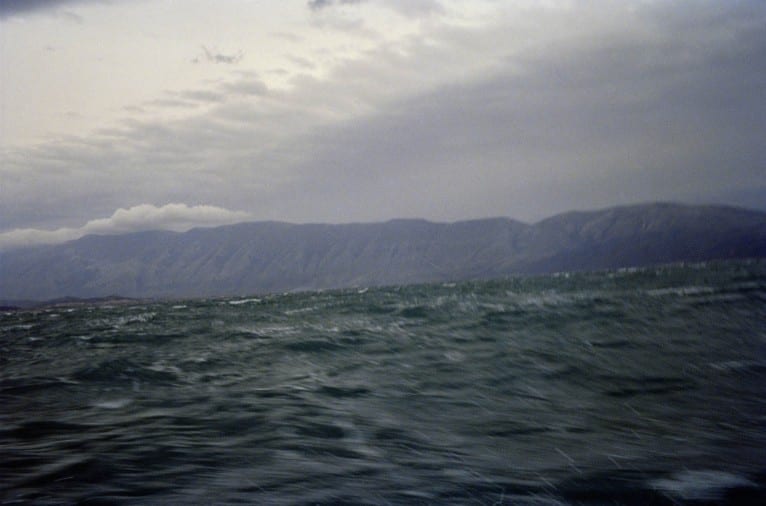 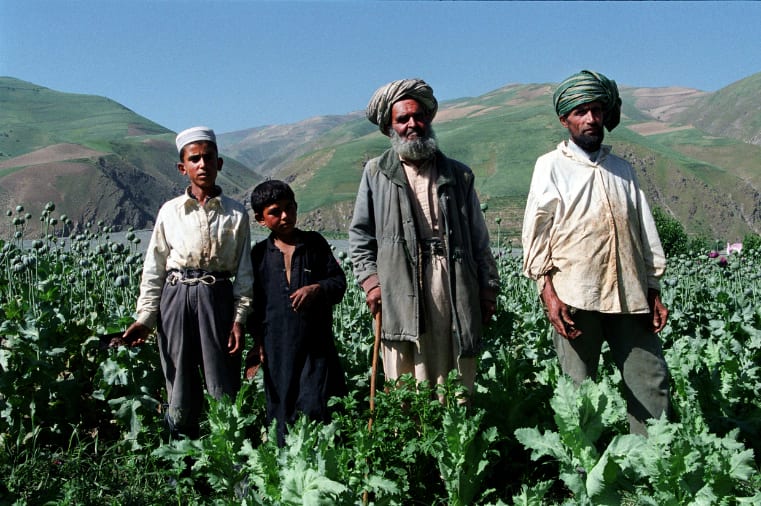 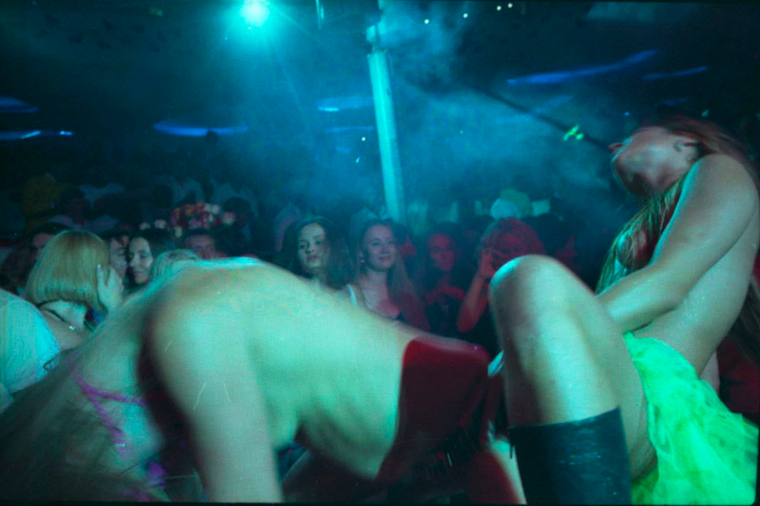 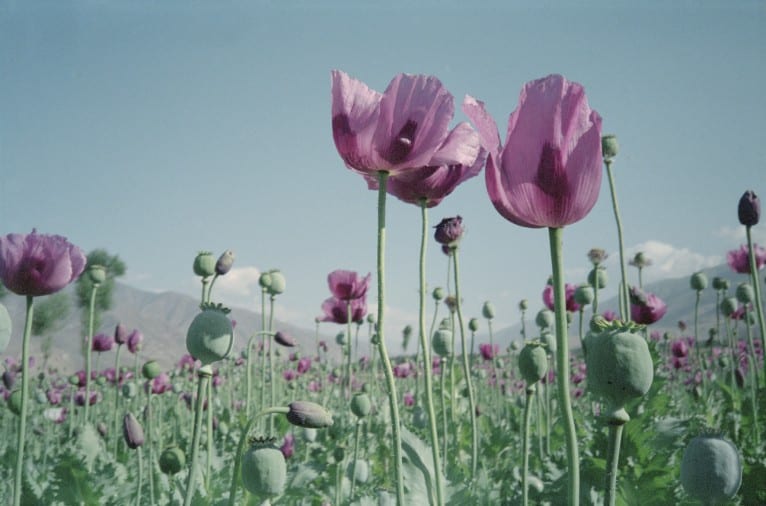 The images bear witness to the web of effects reaching out from Afghanistan’s poppy fields, and make foreign realities nearly tangible. Ragged militaries struggle to secure vast borders with inadequate resources. The unmarked graves of heroin addicts populate roadsides in Karachi, where the addicts cannot be buried with their families.

When De Jong and Knoth return eight years later in 2009 everything has changed. The economy is growing; some people are buying televisions and motorbikes, and mansions have sprouted in areas that were once government land. They discover that most of this growth is a result of the opium trade, and that the rest is from foreign aid. De Jong and Knoth return to the villages they saw so badly scoured by drought almost a decade before and find terrible flooding. The only signs of the economic upswing, poppy crops and a new road connecting the area to the outside world, have been swept away by flood water. Here it becomes clear that a region which has become highly politicized is populated by people trying to secure food and basic services, not attempting to topple the United States. Also clear is that large portions of its inhabitants perform a very basic calculus when they decide to grow opium or help the Taliban. That calculus is about survival, not politics.

In between these visits to Afghanistan, which, like the rest of the book, are chronologically ordered, Knoth and De Jong travel to twelve other countries, from the UK to Russia, from Pakistan to Ukraine and Somalia to Kosovo, tracking the path that Afghan heroin takes and the impacts it has along the way. Photographs make it clear how situations similar to Afghanistan’s play into the hands of traffickers across the region, and the text makes the photographs bloom with vivid descriptions and well researched description.

The images bear witness to the web of effects reaching out from Afghanistan’s poppy fields, and make foreign realities nearly tangible. Ragged militaries struggle to secure vast borders with inadequate resources. The unmarked graves of heroin addicts populate roadsides in Karachi, where the addicts cannot be buried with their families. Impasses of mountains so rugged it seems impossible to walk, crossed only by American helicopter gunships plated in armor and costing hundred of millions of dollars, but bordered by villages built of stacked stone. Young white women in red light, naked, surrounded by a crowd and immersed in Ukraine’s party culture, which is thick with heroin and prostitution. The faces of jailed heroin users, whose stories are all about traffickers powerful enough to go free. And the beautiful alpine meadows of Kyrgyzstan, where blue streams flow down from the heights, and enormous quantities of drugs find their way through from Afghanistan.

The text, through interviews, citations of studies, and travel stories, describes how the trade thrives on Smuta, the Russian word for chaos, and how the countries that appear most organized and free of chaos – the US and Western Europe, fuel the social degradation of more vulnerable states. It describes how governments must yield to the organizations that boost GDP, and how entire states are captured through bribery and coercion. It describes how dozens of armed groups have funded bloody power struggles through the trafficking and sale of Afghan heroin, and how communities across Europe have been devastated by its use.

Still, Poppy does not forward an agenda. The objective format will leave readers with many impressions: that drugs take many lives and contribute to instability and conflict the world over; that for many people the choice between participating in this system and absolute poverty is a non-choice; and that the foreign policy of powerful and distant nations has impacts both far reaching and un-intended.

Poppy works a kind of magic. It is not a news report or a compilation. Rather, the authors tell a complex story, and their insight, gained from decades of traveling opium’s routes, enables us to glimpse the poppy economy and its causes in surprising detail. Immerse yourself in this book and you will emerge believing the world to be a very different place than it was before Robert Knoth and Antoinette de Jong led you on Poppy: Trails of Afghan Heroin.

Poppy is a production of Paradox.