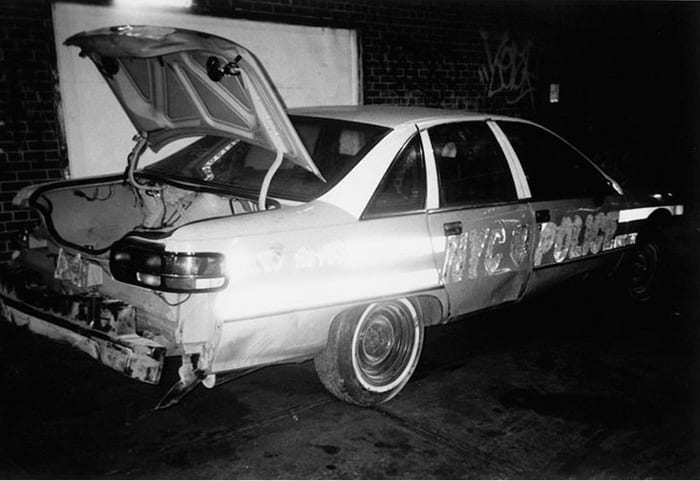 The harsh light of a flash firing out of a small camera tends to turn pictures of almost anything into “ugly” at nighttime. As objects are cruelly lit up and dark shadows cast it feels like you are viewing via the eyes of a homicide investigator behind a taped off crime scene. All blemishes are highlighted, streets and complexions appear cut up and scarred. As an artist, technique like flash can be harnessed, wielded and made to buckle to your will.

During 1994-95, the artist Christopher Wool, primarily a painter, turned this deft wielding of technique loose on a portion of New York City. The results are, “East Broadway Breakdown”, published in 2003. The book, named after a street where Christopher lived and work, is an exploration into the ugly side of night. There’s no text – no intro essay or bridge to this strange land, and no formal exit. You simply enter the dark and immediately are pulled along dank streets and scarred habitations. The shapes of the constantly appearing signs and metal cyclone fences take on feelings that are not unlike prison. Garbage and litter, strewn everywhere, foreshadows the ugly backdrop of  the soon to appear, Dash Snow and his merry pranksters with their reveling in shit and barfing next to garbage eating dogs. In these night views, cars (including police cars) are abandoned and battered and water pools turn into lakes of black liquid filth as if a hurricane had hit and never totally receded. Of course, the real “hurricane” on display is simply the hard living and a portion of the city falling to its knees, appearing to be sick and hobbled by this “breakdown”.

Plenty of work has been done wielding this technique but not much has been done well and hardly anything has been done this well. Two efforts come to mind that are strong, each in their own way – RJ Shaughnessy’s “Your Golden Opportunity is Comeing Very Soon” (2009) and Chris Shaw’s “Life as a Night Porter” (2005). If I find minor fault in Christopher Wool’s contribution it is in the volume of pictures (300+ pages) and in the orientation of the photographs – the images fill up the right side pages vertically. Depending on which way the photograph was taken, you must continually shift the book vertically and horizontally to view the images squarely. Obviously the volume of imagery functions to drown the viewer in a sea of shit which is the point, but still, a slight paring back while leaving volume, could have slightly elevated the power. Regardless, the book is ultimately a giant winner. Additionally, there are connections to Wool’s painting (aesthetic, shape, organizational, etc.) that can be seen in the work, explore those for yourself to see this distinct parallel.