Paul Schiek is no stranger to the practice of appropriation; he studied under Larry Sultan – who collaborated with Mike Mandel to produce Evidence, a collection of found and recontextualized images.

“[A] photograph is only a fragment, and with the passage of time its moorings come unstuck. It drifts away into a soft abstract pastness, open to any kind of reading.”
– Susan Sontag, On Photography, p. 71.

As a professor at CalArts in the 1970s, John Baldessari used a rubber stamp on student work reading, “Nice idea, but it’s been done by blank,” filling in the empty space with the appropriate artist’s name. “That would never happen now,” he explained in a 2009 interview with arts editor Karen Wright, who probed, “[b]ecause it would be considered cruel?” He replied, “[b]ecause everything has been done. We just recycle stuff.”

Paul Schiek is no stranger to the practice of appropriation; he studied under Larry Sultan – who collaborated with Mike Mandel to produce Evidence, a collection of found and recontextualized images. In his recent body of work, dead men don’t look like me, Schiek culls selected black and white photographs of young men from hundreds of 1950s mug shots discovered by his friend and fellow photographer Mike Brodie in a deserted Georgia prison. He removes any text or numbers suggestive of these mug shots’ previous function, enlarges the images to a greater than life-sized scale and prints them on highly glossy paper, all efforts to aestheticize these previously utilitarian records. By attempting to divorce these pictures from their traditional presentation – perceived as synonymous with criminality – the photographs negotiate a certain tension between the former and present lives of these portraits. 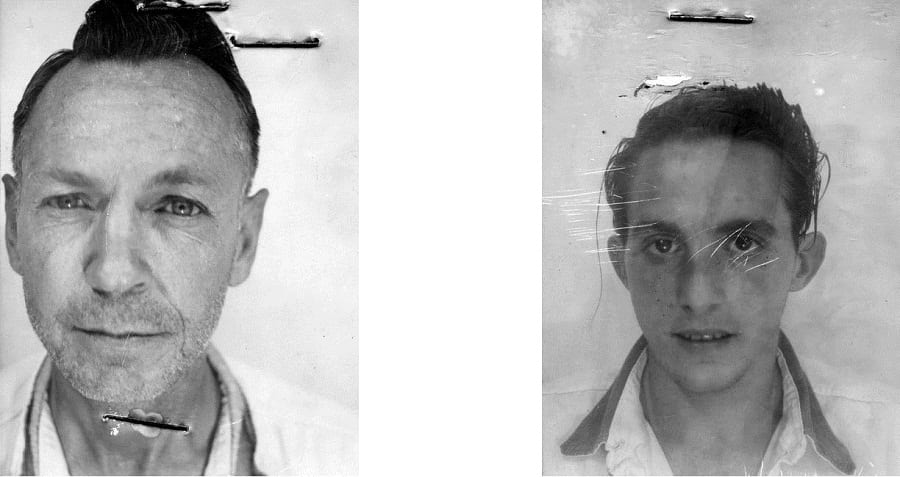 While Schiek’s appropriation situates these pictures within a fine art frame of reference, incorporating them within art history’s long-standing interest in portraiture, from old master paintings to the photographs of Mike Disfarmer, Richard Avedon and Thomas Ruff, they fundamentally remain mug shots. By presenting these historically diminutive pictures at such a considerable scale, Schiek evokes the tradition of portrait painting, replacing the expected aristocrat or member of royalty with the quintessential symbol of human impotence. Through his metaphoric lens, these men are isolated from the masses and imbued with an uncharacteristic sense of individuality and character. At the same time, however, the faces and posturing of these men reveal traces of the apprehension characterizing the original moment in which their likeness was seized. Susan Sontag has suggested that “[i]n the normal rhetoric of the photographic portrait, facing the camera signifies solemnity, frankness, the disclosure of the subject’s essence.” Documenting a moment of presumed delinquency, mug shots forcibly register subjects in one of the most emotionally fraught moments imaginable; as opposed to the symbiotic relationship between photographer and subject Sontag’s description insinuates, mug shots lay bear the faces of men in an instance where freedom or captivity hangs in the balance.

In today’s image-saturated society, appropriating the preexisting seems to offer a potentially compelling approach to contemporary picture making. When poignantly executed, the reconceptualization of images imbedded within popular social consciousness allows for a renewed perspective that attends to shifts in contemporary culture.

Allie Haeusslein is an arts writer based in San Francisco, California.  She received her MA in Contemporary Art from the Sotheby’s Institute, London, focusing specifically on late twentieth-century art in California. Her writing regularly appears in publications including Art Practical and DailyServing. Most recently, she contributed an essay to the monograph, Chris McCaw: Sunburn. Haeusslein is the Gallery Manager for Pier 24 Photography, an exhibition space dedicated to the presentation of photography.