These are people who have arrived with ambitions, but are hampered by political conflict, by language, by finances and by time and distance; as well as alienated as a result of their efforts.

J Carrier’s new book Elementary Calculus is a collection of 74 luminous photographs shot in Tel Aviv and Jerusalem. Carrier’s subjects are immigrants and refugees, people who have arrived in one of the world’s most politically embattled regions and must operate within parameters that are not their own, but define the societies they inhabit. Carrier manages to simultaneously document the biblical lands and the experience of being defenselessly foreign in them by capturing the symbolic architecture within which his subjects exist.

Before the photographs begin there is a lone quote printed in narrow capital letters:

“And your visions are your exile in a world where a shadow has no identity, no gravity. You walk as if you were someone else.”

These words belong to the poet Mahmoud Darwish, who is famous for writing about what it is like to be Palestinian in the age of Israel, and whose name is synonymous with the Palestinian liberation movement. Although opening with this quote might seem to point viewers towards the Israeli – Palestinian conflict, that is not necessarily what this book is about, and although the quote may have come from those circumstances, Darwish’s writing isn’t narrow or exclusively political, and it would be unfair to interpret his words in that fashion.

The photographs that begin after the Darwish quote have a natural, documentary style. They are slightly uncentered, no one is posed or prepared to be photographed, and rules of composition are exercised haphazardly but to great effect. The pictures are printed in washed out tones that capture the dusty grays and ivory whites of desert cities, and are occasionally punctuated by small explosions of color from flowers, fabrics, and trash.

From the very first photograph, which is of a dove on the face of a white rock wall, Carrier establishes a configuration of symbols. We see a terrain of arid city blocks, red graffiti of hearts and stars of David on a white wall, a chain and lock in the sun, a flowering tree, Hebrew letters overlaying a black female face, birds on telephone wires, and planes in the sky. When described these images boarder on facile, but when viewed on the page and interspersed with the photograph’s other subjects, they read as effective and natural. 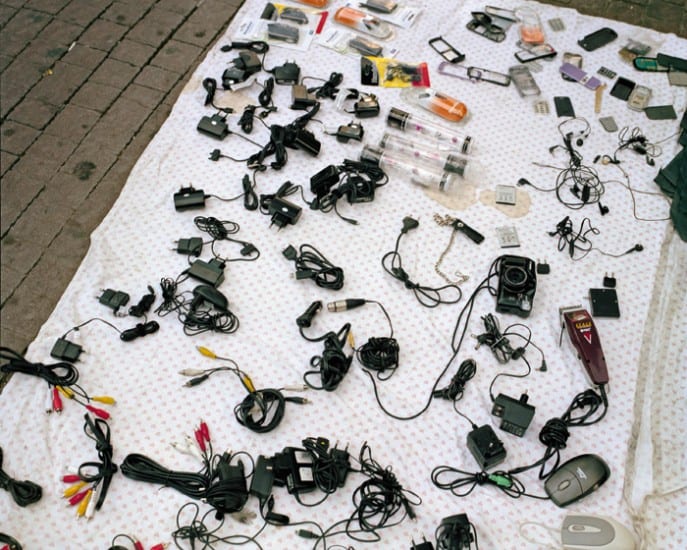 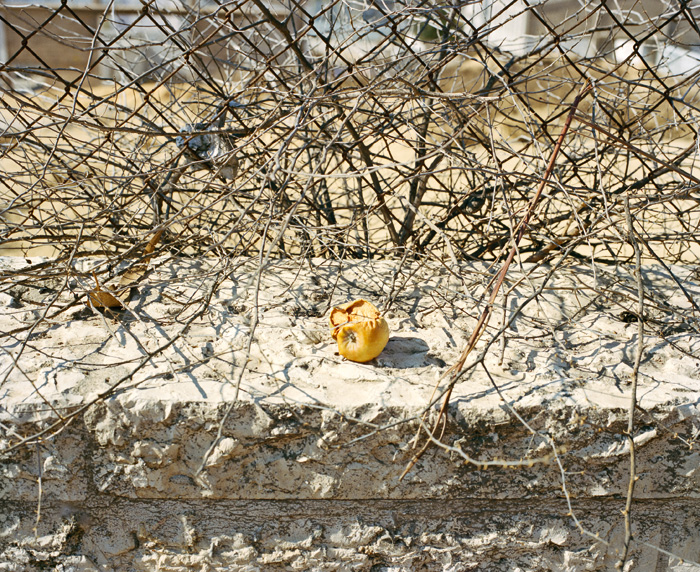 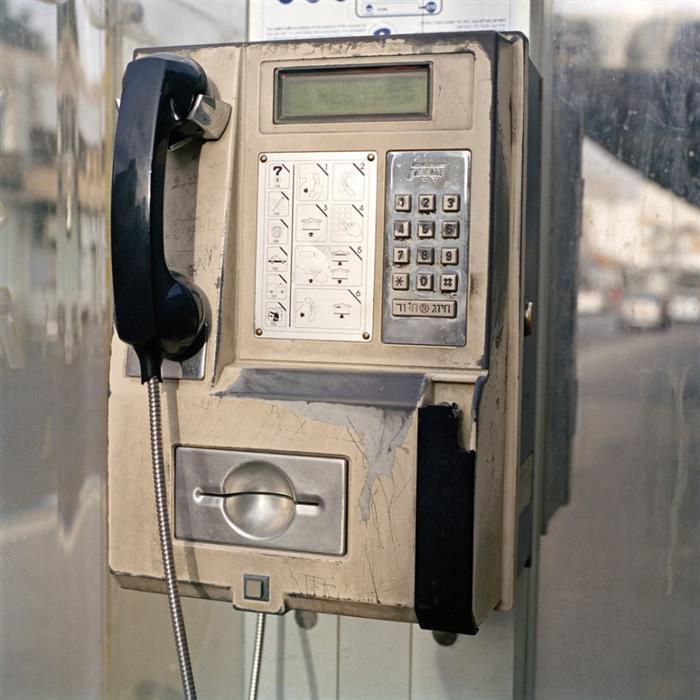 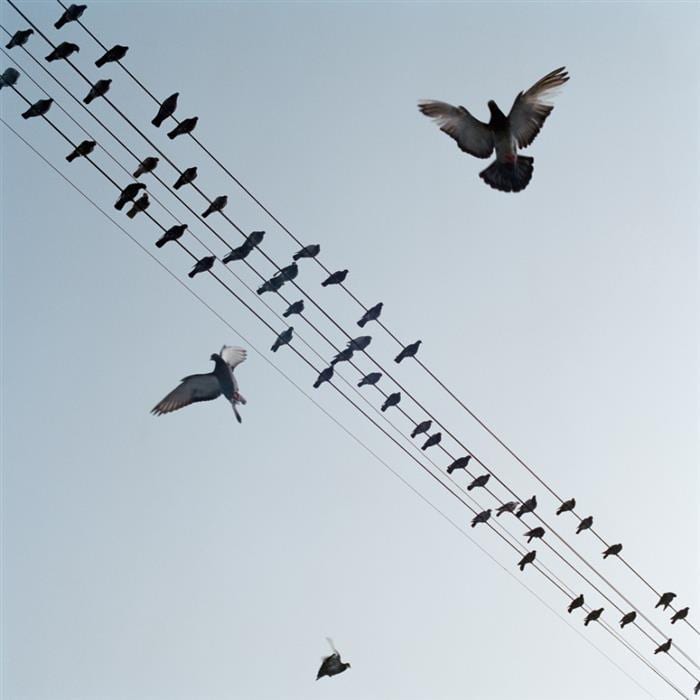 As the photographs progress, the people pictured become living symbols themselves. They are indistinct like the memory of a dream; impossible to put a finger on and yet wholly emblematic.

When people enter the series they are mostly talking on payphones, and the first person pictured is a black man dressed in black with scarifications across his forehead, talking on a payphone. Then come East Asians, South Asians, Africans, all leaning on payphones, or crouching under them as if under a great weight, or standing straight, receiver to ear. Their expressions are universally serious whenever pictured, and some hold as many as two cell phones by their side as they talk.

As the photographs progress, the people pictured become living symbols themselves. They are indistinct like the memory of a dream; impossible to put a finger on and yet wholly emblematic. This is partly because the photographs are un-captioned and their author makes little effort to direct the viewer’s interpretations, but also because the subjects are caught in dramas of which the viewer only sees a part, but which span the subjects’ entire lives. This is often the case with un-captioned documentary photographs, but here the drama of an entire region is embodied by these individuals. This region is drenched with staggering amounts of human experience, and it is because of the impossibility of understanding something of that scale that the humans in these photographs function as symbols.

These are people who have arrived with ambitions, but are hampered by political conflict, by language, by finances and by time and distance; as well as alienated as a result of their efforts.

Although there is only a publishers note to guide viewers through the experience of these pictures, information is transmitted in other ways. There are the aforementioned symbols, and there are also words. “Time” “Infinity” and “Distance” all appear at the center of photographs in vibrant color. Two of those words are found on pieces of trash, and the other on a bright nylon jacket. All pertain to the lives of people living far from where they learned to understand the world. When coupled with the very involved or difficult payphone time that most of the people in these photos are undergoing, the circumstances of their lives begin to come into focus.

The phones are an exit from the consuming scenario of difficult lives, and travel over geographies otherwise un-crossable. For the people who are enmeshed in a foreign Tel Aviv or Jerusalem with few financial means, they may be anchors to old ways, old problems, old places. They are like water in a desert.

Although broad political strife is a theme in these pictures, what seems more directly addressed by photographing the tele-conversationalists is the experience of acclimating to an increasingly mobile and disorienting world that often tosses individuals between cultural and economic chasms roughly equivalent to centuries after only a plane ride. These are people who have arrived with ambitions, but are hampered by political conflict, by language, by finances and by time and distance; as well as alienated as a result of their efforts. As Darwish writes, their visions are indeed their exile, and J Carrier’s photographs brilliantly capture this, and the vital atmosphere of a misunderstood region…

Paul Loomis writes for ASX and graduated from the University of North Carolina at Asheville in 2011 with degrees in Ecology and Creative writing. He has lived in North Carolina, California, Ohio, The Netherlands, and the forests of Appalachia. He currently resides in Mexico City, writes fiction and non-fiction, and teaches Chemistry and Literature. He can be contacted here: [email protected]