Are these “interrogations” real or is this just a graphic experiment meant to help us imagine the way that power is wielded behind closed doors?

Whether or Not the Guns are Loaded

Interrogations is a collection of photographs taken in Russia and Ukraine over six years of travel by Donald Webber. It comes to you in a cardboard sheath with open sides, and when you remove the book its cover has the pleasing texture of handmade paper and is the color of Pepto Bismol. Inside there are two types of photographs. The first type is atmospheric, involves few people, and documents rural Russia and Ukraine. The second type accounts for most of the book’s page length and is focused on a number of frightened people in the same room.

The photographs are printed on a high quality matte paper. It is not so rarified that you feel you are looking at an expensive large-format living room book whose purpose is impress on guests that their host likes art. The approach that the publisher of Interrogations (Schlit Publishing) has taken interferes very little; the materials and presentation make it feel like you are seeing a person’s private photographs, printed and compiled.

Interrogations is about power. Viewers are likely alert to this early on, but they are not informed about the circumstances the book documents, which makes for an challenging and worthwhile viewing experience. The first section of Interrogations, entitled “Prologue,” is a series of skillfully framed eastern european scenes that gain undertones of desolation and violence as you move through them. There are cold mountain days and snow drifts trying to swallow things, there are very sick boys in the sauna, burning fields, and a hand gripping the mouth of an old man, whose eyes are closed.

The last photo of the Prologue is of a woman in a robe. She is lying on a purple sofa and her robe is orange with dull red splashes. Behind her and the sofa there is flowered wallpaper broken only by a black, rectangular hole above her elbow. Although her position is relaxed, the look on the woman’s face suggests that there is something very wrong going on just out of sight. 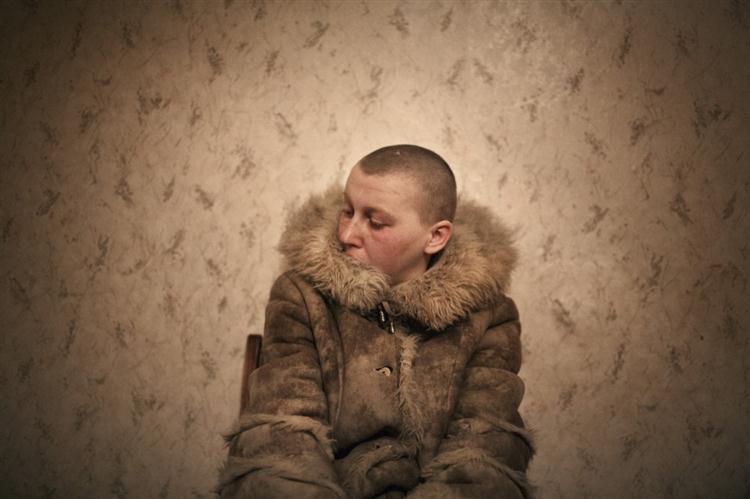 If the situations are real, then why is nothing being done, and do viewers have an obligation to act?

This theme continues in the book’s main section, “Interrogations.” The section’s first image shows a very concerned young man standing in a room with wallpaper whose texture and color matches the book’s pink cover. From his image we are catapulted into a world as sinister as it is unexplained, a place where fear dominates, the principles of justice blur, and the viewer becomes entangled in questions.

The people in the photographs of the book’s main section appear to be of slavic decent. Each wears a jacket that seems to never have been washed, but looks quite warm. They themselves are unanimously dirty and wear a look of shame and apprehension that suggests accusation. As the photographs progress the subjects become more fearful. Sometimes they are contorted in ways that make it clear they are trying to avoid something directly outside the frame. It becomes increasingly obvious what that thing is, but not whether or not we are seeing a reenactment.

In photograph 36 (of 100) a man in a black leather jacket is leaning heavily against the wall beside him and away from a hand extending threateningly in his direction from the right side of the frame. His eyes are down, away from the hand and away from the camera. In the next photograph the hand is gone, but he looks more frightened and his eyes are up, staring at something around chest level to the right of the photographer. In the third frame the hand has returned, but this time it grips a pistol, which is planted against the man’s temple. The gun looks real, but is it loaded?

In the rest of the series the subjects are in various stages of confession or defense, hands flat on chests in order to appear as honest as possible, making sweeping gestures to mask fear or proclaim innocence, or broken by violence or psychological degradation. We also see them anxiously signing papers. The photographer is so close to the subjects that their feet and their captors aren’t visible, just their faces. Even when not crying or cringing, the trepidation in their expressions is almost palpable.

After this barrage of images many questions follow. Chief among them are questions of authenticity and of culpability. Are these “interrogations” real or is this just a graphic experiment meant to help us imagine the way that power is wielded behind closed doors? If the situations are real, then why is nothing being done, and do viewers have an obligation to act? 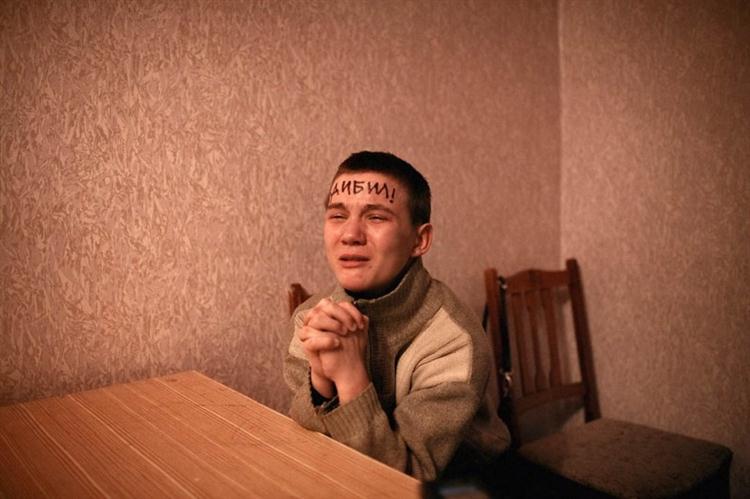 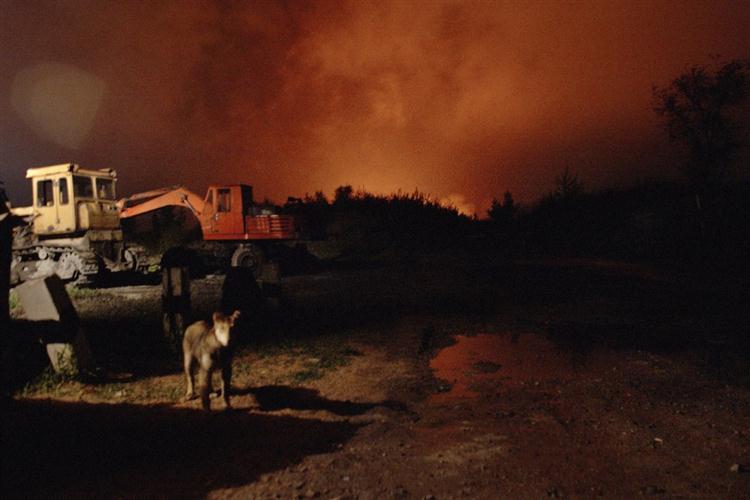 These questions are asked whether or not the guns are loaded, but it turns out that they are. The photographs were taken in a police station that Weber gained access to through his friendship with the police chief.

The book never openly admits its intentions. There is no introduction, and although there is an author’s note about the artistic experience of making the book, it comes after the photographs and offers no explanations. Although at first this approach may seem amateur, as a strategy it encourages the viewer to ask important questions about the nature of guilt, power, and accusation.

The the photographs are taken at an angle and proximity that position the viewer exactly where an interrogator would be, which makes viewers the extra eyes in a room meant only for the accused and accusers: witnesses. That status is compounded by the lack of information, which creates a situation whose morality is not pre-configured, that is not being held up as an example of prisoner abuse, but remains open. As a result, the burden of decision is left with the viewer.

The confusion that this book can subject a viewer to is potentially more powerful even than the keenly captured reality of coercion. It forces viewers to become a part of the judgement that is implicit in each frame, and puts them in essentially the same position as the interrogators with regards to information. Are these people criminals or actors or just normal people in a strange situation?

These questions are asked whether or not the guns are loaded, but it turns out that they are. The photographs were taken in a police station that Weber gained access to through his friendship with the police chief. He sat in the pink wallpapered interrogation room for dozens of interrogations and took hundreds of pictures. He claims that he had to wait for months for the police to relax, stop playing nice cop, and “do their jobs,” which means treating prisoners as they would without his presence.

The same sort of interrogation room exists all over the world, and is used by various organizations to a single end. When the larger community does gain visual access to such spaces, it is a coup, as in Abu Ghraib. Although it is unlikely that anything resembling justice will ever penetrate the police station where these photographs were taken, Interrogations can still be considered a coup. It takes a process whose power derives from its seclusion and tosses it into the open with a refined subtext that challenge its viewers and is effortlessly genuine. What then happens as a result of the challenge is nothing/up to us.

Paul Loomis writes for ASX and graduated from the University of North Carolina at Asheville in 2011 with degrees in Ecology and Creative writing. He has lived in North Carolina, California, Ohio, The Netherlands, and the forests of Appalachia. He currently resides in Mexico City, writes fiction and non-fiction, and teaches Chemistry and Literature. He can be contacted here: tetra.loomis@gmail.com