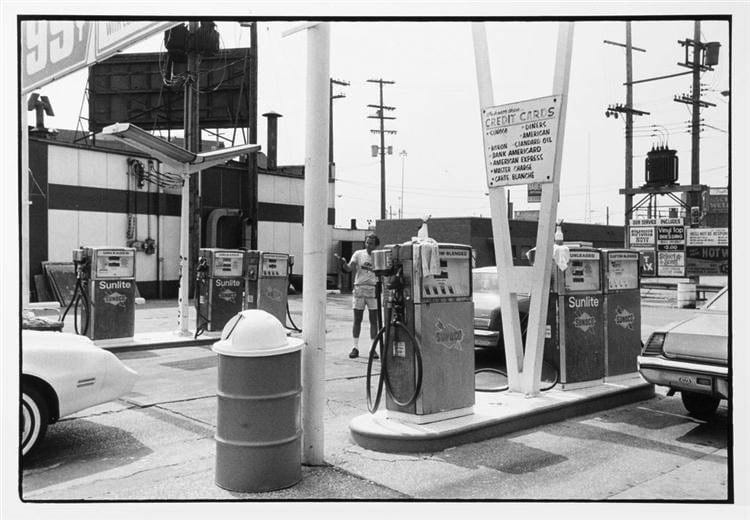 By Steven Skopik, Published originally in the catalog for the exhibition So Far So Good, (Mahwah: Ramapo College, 2007), pp. 1-7.

Retrospectives are a lot like photographs. Both produce the illusion of order by means of a not-so-evident selectivity. The photograph’s striking descriptive fidelity appears to capture the world’s complexity intact, a quality that lends it a matter-of-fact authority. Such an impression is deceptive, of course since the creation of photographic meaning hinges not only on inclusion, but on carefully considered omission. In producing a photograph—or assembling a retrospective—comprehensiveness comes at the price of coherence, and so the pressure is often to eliminate whatever may prove distracting, formally idiosyncratic or thematically contradictory. However replete in detail, the photograph cannot exhaustively represent its subject, nor can the retrospective catalog or exhibition truly sum up a career. At best, then, the photograph and the retrospective are hypotheses, useful constructs subject to the virtues and limitations of all representations. This is not to say that one should wholly distrust the photographic image, or that the retrospective has nothing to tell us about trends and patterns within an artist’s oevre. It is simply to suggest that, on occasion, it is the fugitive element—the recalcitrant detail in a photograph, or the oddball image in a collection of pictures—that proves unexpectedly cogent.

Over the course of his career, David Freund has explored a number of photographic forms. Often made in the tradition of the itinerant image-maker (his car window pictures are literally taken on-the-go, captured from the confines of a moving automobile), the majority of Freund’s pictures focus on, and occasionally blend, various sub-genres of documentary practice—for example, the vernacular landscape, street photography, and the typological investigation. Throughout his work, Freund eschews the obviously dramatic in favor of a penchant for quotidian detail—the muted vistas and immediate environs of the U.S. interstate system, modest roadside commerce, the rural or suburban playground. A signal quality of Freund’s photographs resides not so much in their overt subject matter, however, as in their tone. While Freund’s series often acknowledge the degraded tatter of the contemporary visual landscape, one notes in them a consistent refusal to lecture, harangue or judge. Rather, Freund seems interested in noticing for us the world’s basic strangeness—typically by means of wry observation, telling juxtapositions, and provocative elisions. 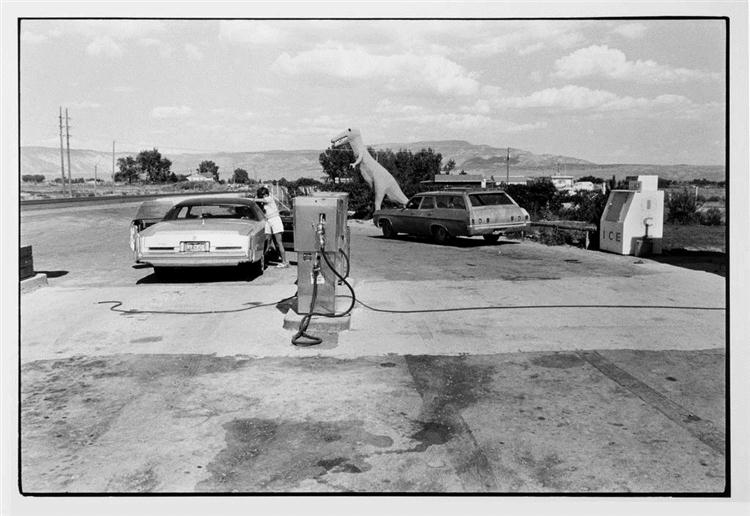 Freund has traveled widely through the United States and Europe, producing series that on first encounter suggest an interest in straightforward documentary survey. His At the Pump work, for example, records gas stations throughout the country. The playground photographs catalog childrens’ recreational sites, and the Navajo pictures document numerous improvised roadside vending booths. Without exception, however, Freund’s peripatetic labors transcend mere inventory to broach a range of associated concerns. The At the Pump pictures, for instance, provide a meditation on subjects such as U.S. road culture, commercial architecture, and the gas station as site of both social connection and alienation. With its frequent inclusion of dramatically intrusive elements emblematic of the grownup world—bulky granaries, poised agricultural machinery, looming industrial cooling towers—the playground series hints at the sometimes uneasy relationship between youth and adulthood. In his images of the American Southwest, dilapidated Navajo trinket stands suggest a culture that has been spiritually compromised and economically stressed to the point of near collapse. To the extent that Freund targets relationships of meaning that are categorically continuous (gas stations/road culture, playgrounds/childhood vs. adulthood, distressed vending stands/distressed state of being), his rhetorical strategy is not so much metaphorical as consistently metonymic.

A notable element of Freund’s photographic approach centers on the well-noticed detail. At times overt, and at others seemingly incidental, such subject inclusions provide a crucial pivot on which the meanings of the pictures turn. Consider an image from the Navajo series, where a banner above the pictured vending booth proclaims the acceptance of “Credit Cards.” The sign’s promise of up-to-date transactional convenience stands in bewildering contrast to the structure’s ramshackle sag, and the sterility of the inhospitable desert beyond. The effect is jarring—at once dryly humorous and somber. 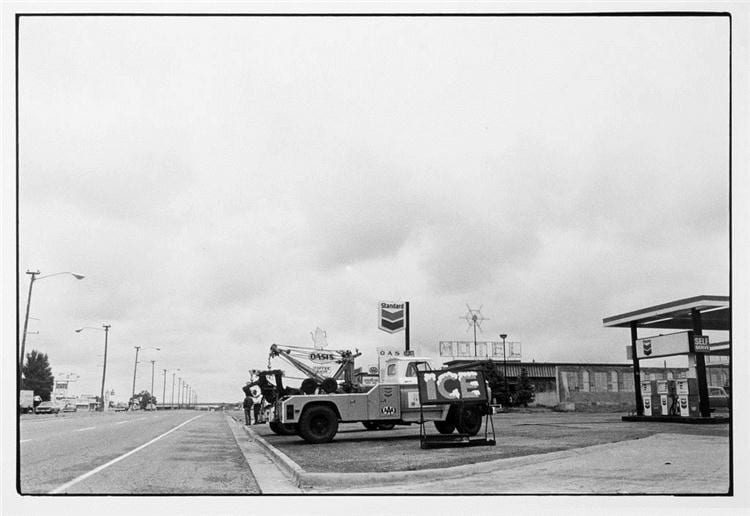 Throughout his work, Freund is able to deploy the device of the arresting detail in a manner that ranges from the whimsical to the epistemologically baffling. In a photograph taken during Freund’s European travels, a line of cars is positioned before a grassy expanse. Unshirted figures and sunbathers beneath umbrellas suggest a recreational park or possible seas-side locale. On the left side of the picture, one discovers a striking interruption—a soccer ball poised peculiarly in mid air. Elements like this prompt more than an appreciation of Freund’s able shutter-tripping reflexes. Considered cursorily, the ball provides a grace note of low-key mirth as one puzzles over its origin. Was it punted into the air by subjects unseen just beyond the horizon, or by the lumbering figure at mid frame? In the context of the photograph’s subject matter, the floating soccer ball acts as a kind of italicization or exclamation point that overdetermines the picture’s theme of holiday exuberance. At some level, though, in this and others of Freund’s photographs, interruptive details like the hovering ball hint at more fundamental questions. What are the limits of understanding the world photographically? What are the limits of perception in general?

With its emphasis on chronological survey, the retrospective exhibition presents image-makers with the opportunity to address their work’s temporal dimension in a manner not possible in the single photograph or pictorial series. It is virtually axiomatic to suggest that time in photographs stands still, while it proceeds apace in the actual world. What may be less evident is that, from the moment of the image’s capture on film or electronic sensor, this disparity creates a fissure, an ever-widening expanse between the photographed moment, and an audience’s sense of its own present. At some difficult-to-determine point, the photograph crosses a threshold that allows it to lurch free of its tether to contemporaneity. 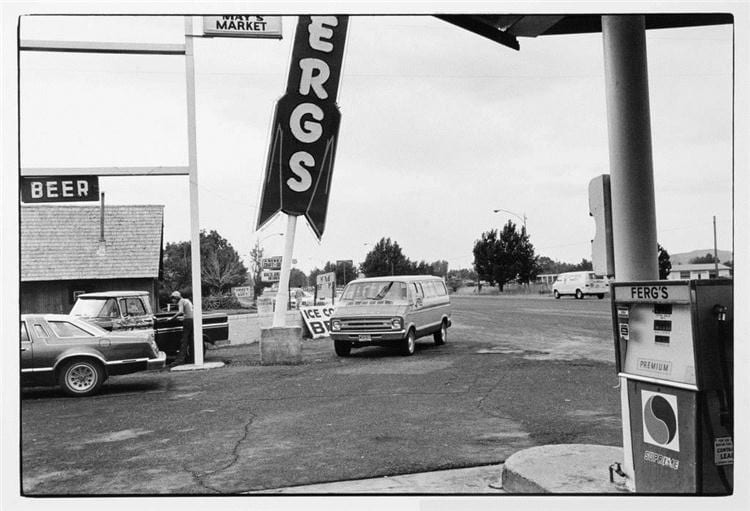 In his selection of some of the material gathered here, Freund seems to have taken this effect into account. Elements that would have been completely unremarkable at the time of the photographs’ making—hair and clothing styles, industrial design, architecture—take on the quality of historical distance. This is evident in disparate bodies of work, from Freund’s self-portraits (time’s relentless advance is traced perhaps most poignantly upon flesh) to his images from the road. Exemplars of idiosyncratic entrepreneurship and local variation, Freund’s gas stations of the late 70s have largely given way to the present-day mini mart, with its standardized architecture, slick signage, and uniform inventory. Even to the casual viewer, the spectacle of fifty-nine cents a gallon gasoline offers a jolt of temporal dislocation. As in all photographs, then, Freund’s subjects are simultaneously available and remote, and his pictures’ tone may be at once exuberant and elegiac. Thus, this exhibition, as it surveys a decades-long commitment to the medium, serves as well to remind us of the photograph’s inevitable and characteristic commerce with time, memory, and the ephemeral.