“AIDS changed everything in my life. There’s life before AIDS, and after AIDS.”

AIDS changed everything in my life. There’s life before AIDS, and after AIDS.

We were in Fire Island that first time we’d heard about AIDS, in July of 1981. I was with Cookie Mueller, Cookie’s lover, Sharon, and photographer David Armstrong, one of my oldest, best friends, and 2 or 3 other boys. Cookie used to write a monthly art critique for Details Magazine. She was the starlet of the Lower East Side: a poetess, a short-story writer, she starred in John Waters’s early movies. She was sort of the queen of the whole downtown social scene.

Cookie just started reading this item out loud from The New York Times about this new illness. David remembers that we all kind of laughed it off. We certainly didn’t think of its magnitude. It didn’t affect us, like: This is going to be our future. Then I remember an article, just after that, in New York magazine calling it “the gay cancer.” Our first friend died in ’82 – one of David’s lovers, a male model.

My art was the diary of my life. I photographed the people around me. I didn’t think of them as people with AIDS. About ’85, I realized that many of the people around me were positive. David Armstrong took an incredible picture of Kevin, his lover at the time, right before Kevin went into the hospital. I photographed him when he was healthy. At that stage, we still didn’t know very much. There was a lot of ignorance. We were very obsessed with what caused it: There were all kinds of rumors, everything from amyl nitrate to bacon. People were tested and being told they had something called ARC, that quickly became medically non-relevant. I was in denial that people were going to die. I thought people could beat it. And then people started dying.

One of the ways I started becoming involved was through artist and activist Avram Finkelstein in ’86, ’87. I’d become friends again with him, having known him when I was 18 and living with the drag queens in Boston in the early ’70s. He was in art school then. In the 1980s he became my hairdresser up at Sassoon. He had helped start the Silence Equals Death Collective, which turned into Act Up. He was one of the people who designed the logo Silence = Death, and the triangle. 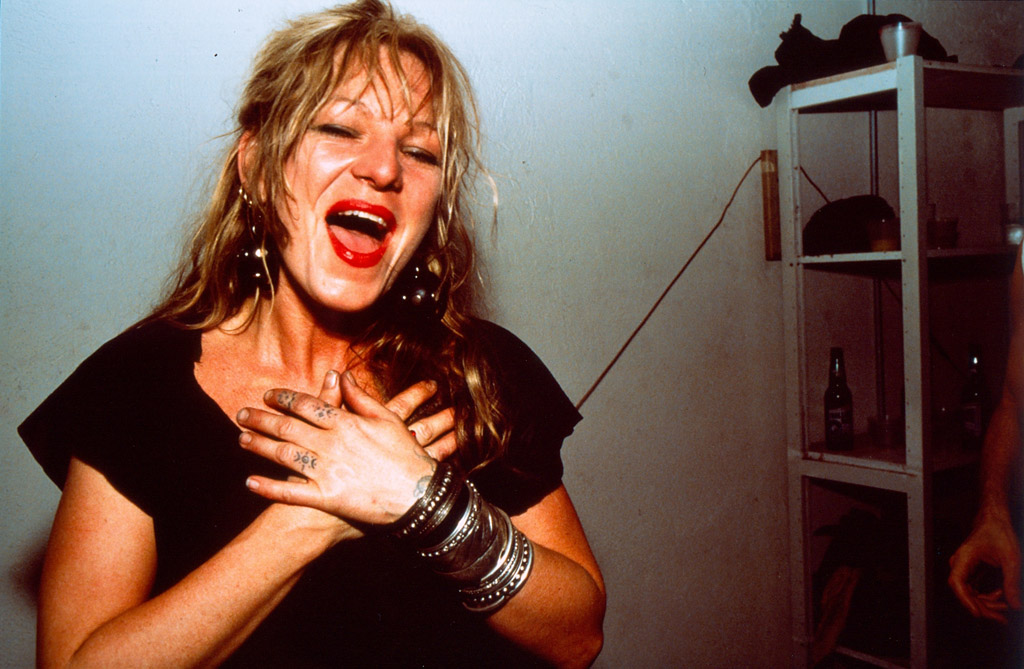 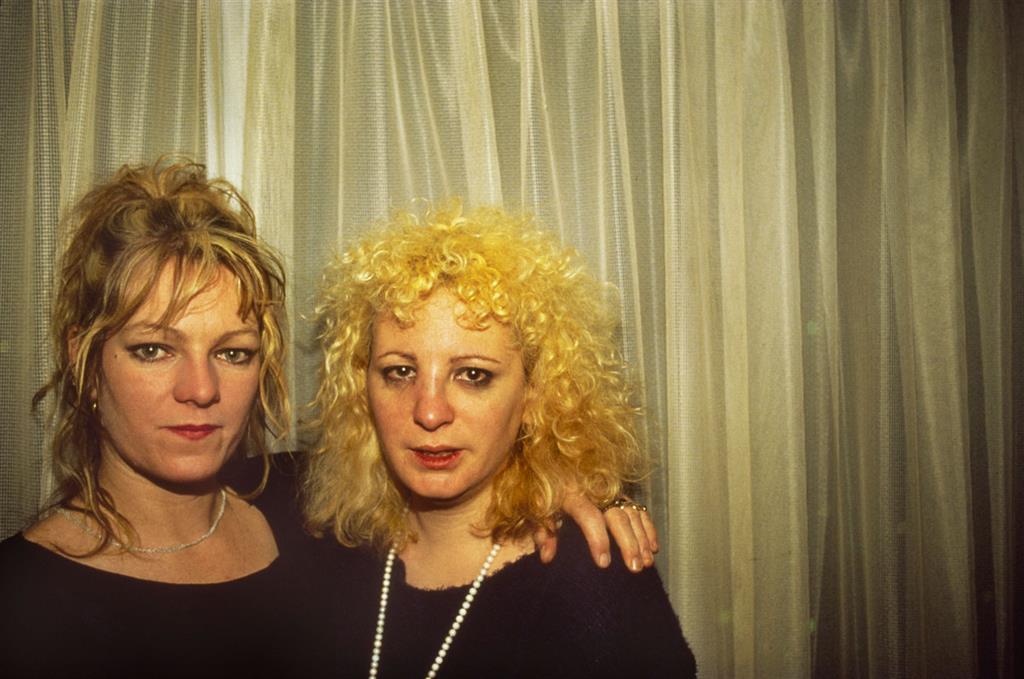 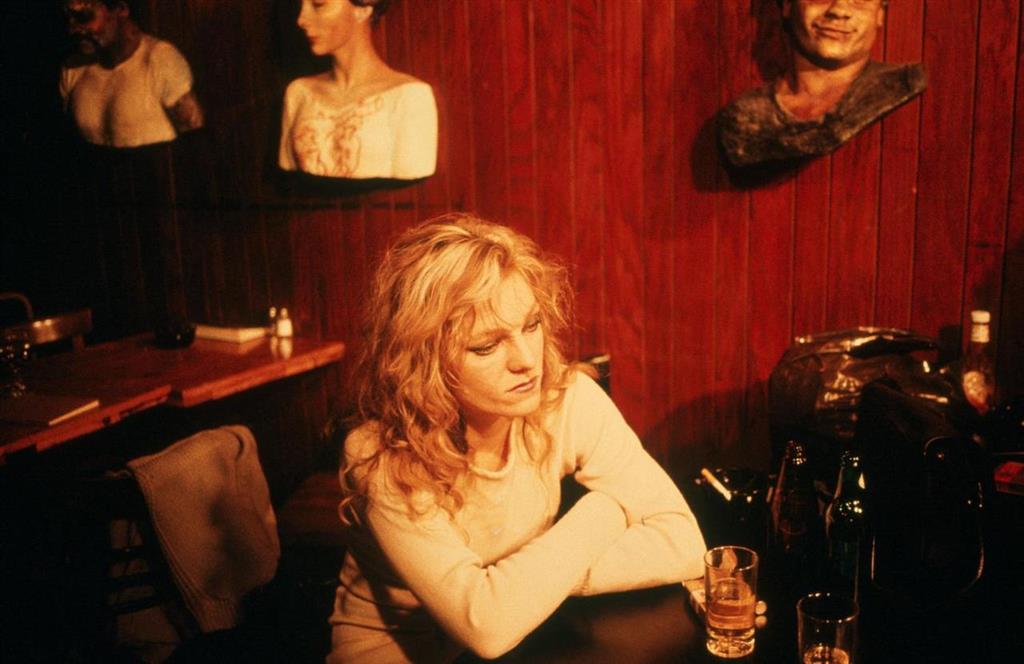 “Putting the pictures together had made me realize how much I’d lost.”

By 1988, Cookie’s condition was worsening. That was the last time I saw Cookie when she could still talk. She had ARC and wasn’t feeling that well. She went into the hospital. I was in the throes of my own problems with addiction and people with AIDS didn’t become defined as ‘people with AIDS’ in my own mind. I continued to photograph Cookie as I always did. Then I went into detox, partly because I wasn’t able to show up for my friends who were sick. Somebody had said to me, ‘How can you be killing yourself when your friends around you are dying?’ And that woke me up.

When I went to see Cookie in Provincetown, after I got out of the halfway house, she had lost her voice. Her laughter and her verbal wit had been so much of her personality. The fact that she couldn’t talk, the fact that she couldn’t walk without a cane was so devastating that I was calling every doctor, screaming at the impotence I felt. At that point, I was like a child thinking that doctors will still make you well, and not believing that there was nothing they could do. That’s when the rage became an obsession with me.

It was only in ’89, after Cookie died and I put together the Cookie portfolio – – 15 pictures taken over 13 years, with a text about our relationship – – that I realized photographing couldn’t keep people alive. Even though I never consciously set out to create pictures that would help humanize AIDS, I realized they could affect others.

The same day Cookie died, my big show “Witnesses: Against Our Vanishing” opened, which I curated at New York’s Artists Space. It was the first major show done by people in the community where all the work was done by people with AIDS or by people who had died of AIDS. It became a national controversy. The government took away the show’s grant from the National Endowment of the Arts because of David Wojnarowicz’s text, a brilliant dissertation against the government and the Catholic church for their position and their silence on AIDS. There were 15,000 people at the opening because of the rage at the government’s response.

And out of that show, came Visual AIDS. We were the people who started the Red Ribbon, the idea of artist Frank Moore. We were the people who started the Day With(out) Art , in 1989, and every December First thereafter. So, in effect, photography and art addressed this issue in a pivotal way in the 1980s. A lot of it came from our group’s personal anguish and desire to affect change.

I showed my portfolio and text of Cookie in 1990. And as I said in the accompanying text, I had always thought that if I photographed someone enough, I could never lose them. Putting the pictures together had made me realize how much I’d lost. And I went into a long period of not being able to photograph. I realized how little photography did. It had failed me. Then, after a while, I started showing the Cookie portfolio and then the other grids and groupings of other very close friends who had died in Europe and in New York, I sort of had the support of Act Up. By then, Act Up was becoming very active and having a major effect. I went to some meetings and demonstrations, though I wasn’t a member in terms of going every week. But people in the group expressed to me at the time and over the years that I was sort of doing emotionally what they were doing politically. And I was never accused of exploitation, that I was doing anything to advance my career. It wouldn’t have occurred to me to use my friends that way. Ever.

Every show I have at New York’s Matthew Marks Gallery in the last few years, I sell a print cheap, 200 of them for $200 or something, to raise money. I never wanted my work to get elitist and expensive. There’s always something sold for very little so that people – – like myself – – could afford it. I’m still poor in spite of the fact that everyone else makes money off me. Last year I raised $75,000 for ‘The Good Doctor’ in Haiti. The year before, I raised $50,000 for the Gay Men’s Health Crisis to target their addiction program for free treatment for drug addicts with AIDS.

In large part, my work is about AIDS. In my 1996 retrospective at the Whitney, there was a room about AIDS. And the catalog that went with it, I’ll Be Your Mirror, has sections on my photo dealer in Paris who died of AIDS. I photographed him and I was witness to his death. Gilles had shown the Cookie portfolio. He and his lover, Gotscho, understood that it was important that I make the same kind of record of Gilles’s life so that he wouldn’t be lost. It was about trying to hold onto people, making sure they didn’t disappear without a trace. And my latest work, in the manner of Renaissance altarpieces, is a grid called ‘Positive.’ Most of my friends are positive. It shows people who are positive, living positive lives.

My photography, in the end, didn’t do enough. It didn’t save Cookie. But over time, my photographs, and other photography about people with AIDS, has helped. It has definitely given a more human face to statistics. We need to keep putting images out there. But not ones that are digitally manipulated like almost everyone is doing now. In two years, there’ll be no more Cibachrome, supposedly. I hate digital images. We need to have reality instead of this believable-fiction crap that’s become so popular.

You can explore the entire 20th Anniversary AIDS issue of The Digital Journalist here: