“When I photograph now,” he said, “I try to imagine that I’d never seen a place like this before.”

Lars Tunbjörk: Alien at the Office

Whether Lars Tunbjörk is a visionary or simply a weirdo with a camera, perhaps that’s a matter of opinion.

Certainly Tunbjörk, the acclaimed Swedish photographer – winner of the 2003 Grand Prix Terre D’Images at the Festival de Biarritz, author of seven collections of published photos – has done something no one else ever thought to do: travel the globe, slip into the offices of stockbrokers and insurance agents, and take photos of empty office cubicles. It was an inspired idea, he says, that struck him in the early ’90s, as he was traveling the world taking photos for the New York Times.

“In the course of these assignments, I photographed a lot of empty interiors: welfare offices just after family therapy, empty reception rooms,” said Tunbjörk. “I noticed that even after the people left, a feeling of them stayed in the room, a sense of sadness.” Tunbjörk wondered if he could capture that same lingering sadness in corporate offices, which he calls “the most common – but closed and secretive – place in the western world.”

Getting permission to shoot inside corporate headquarters did indeed take some convincing. In 1994, with the help of contacts from the Times, Tunbjörk got permission to begin shooting. Little did he know his office odyssey would span five years and three continents, leading him from Sweden to America to Japan , with stops at a car company in Tokyo, a telecommunications firm in Stockholm , a bank in Sioux Falls, South Dakota. 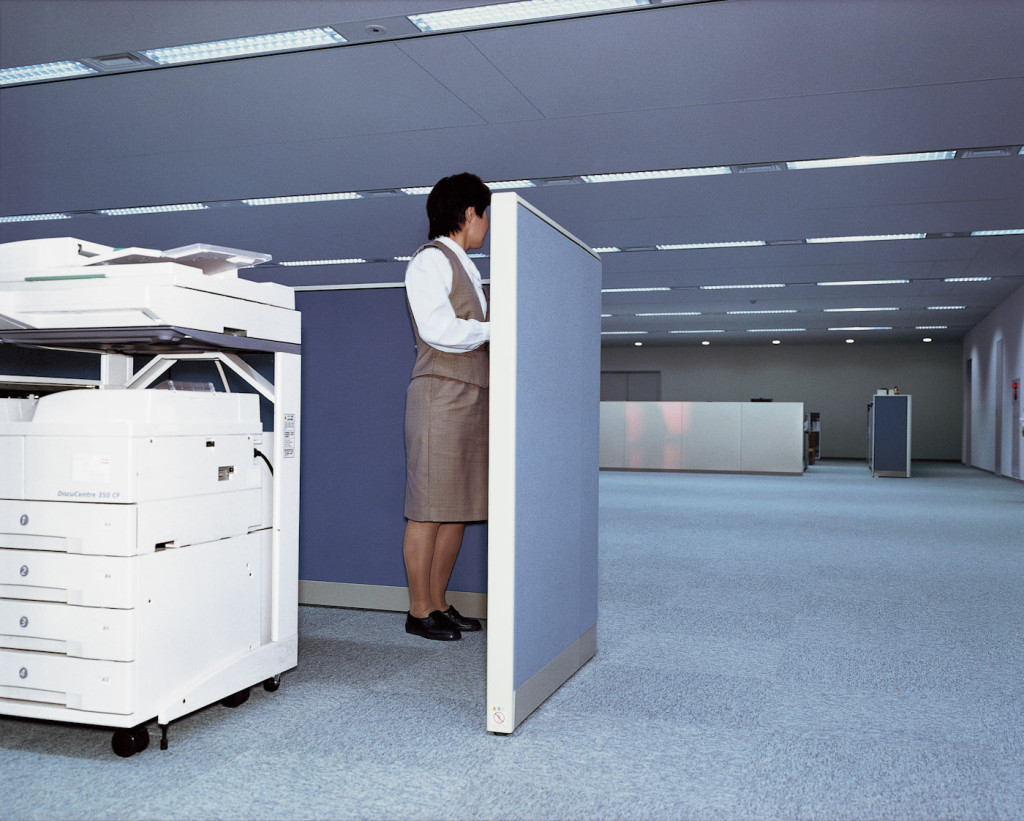 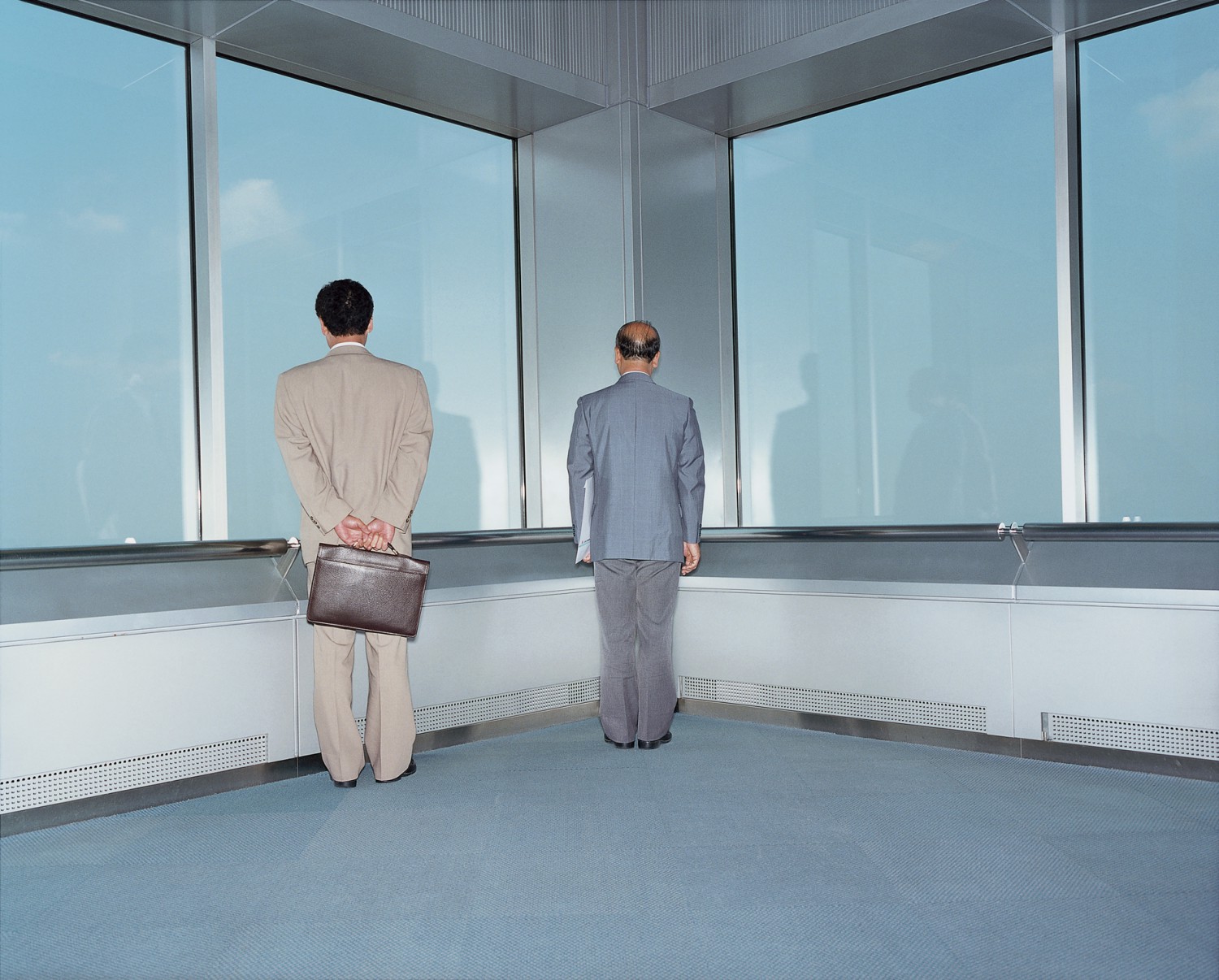 “These photographs don’t offer that ‘good time,'” said Baker. “They’re not for everyone. But they wouldn’t be very interesting if they were.”

In each he found the same sterile walls, dust-free desks and well-vacuumed cubicles. In 2001 he published these photos as “Office,” his sixth collection of artistic photography. Fifteen of those pieces will go on display in San Francisco this December at the renowned James Nicholson Gallery.

“Other photographers, they have to go to esoteric locales to come back with interesting pictures. But Lars, he can transform the most mundane thing in the world into something completely new,” said James Nicholson, director of the San Francisco gallery. He motions to Tunbjörk’s photo of a trash-free trash can, shot looking directly down on the can with a heavy flash that brings out the wrinkles in the trash bag. “Look at the patterns, the colors, the weird shapes and forms. That’s his brilliance. He gets us to see beauty where we’d never think to look for it.”

The photographer, says Nicholson, has transformed the way he sees trash cans.

Of course not everybody is looking for a transformed view of trash cans. Kenneth Baker, long-time art critic for the San Francisco Chronicle, says high-concept pictures like Tunbjörk’s are bound to draw derisive smirks from some viewers because his close-ups of trash receptacles, computer wiring and abandoned office snacks are not just weird but strangely sad.

“The oddity of the images, the depressed emotional tone – they’re hard to ignore,” Baker said. “So it depends what people are looking for. Some are looking for a good time and nothing else, and they feel betrayed when they don’t get it.”

“These photographs don’t offer that ‘good time,'” said Baker. “They’re not for everyone. But they wouldn’t be very interesting if they were.” 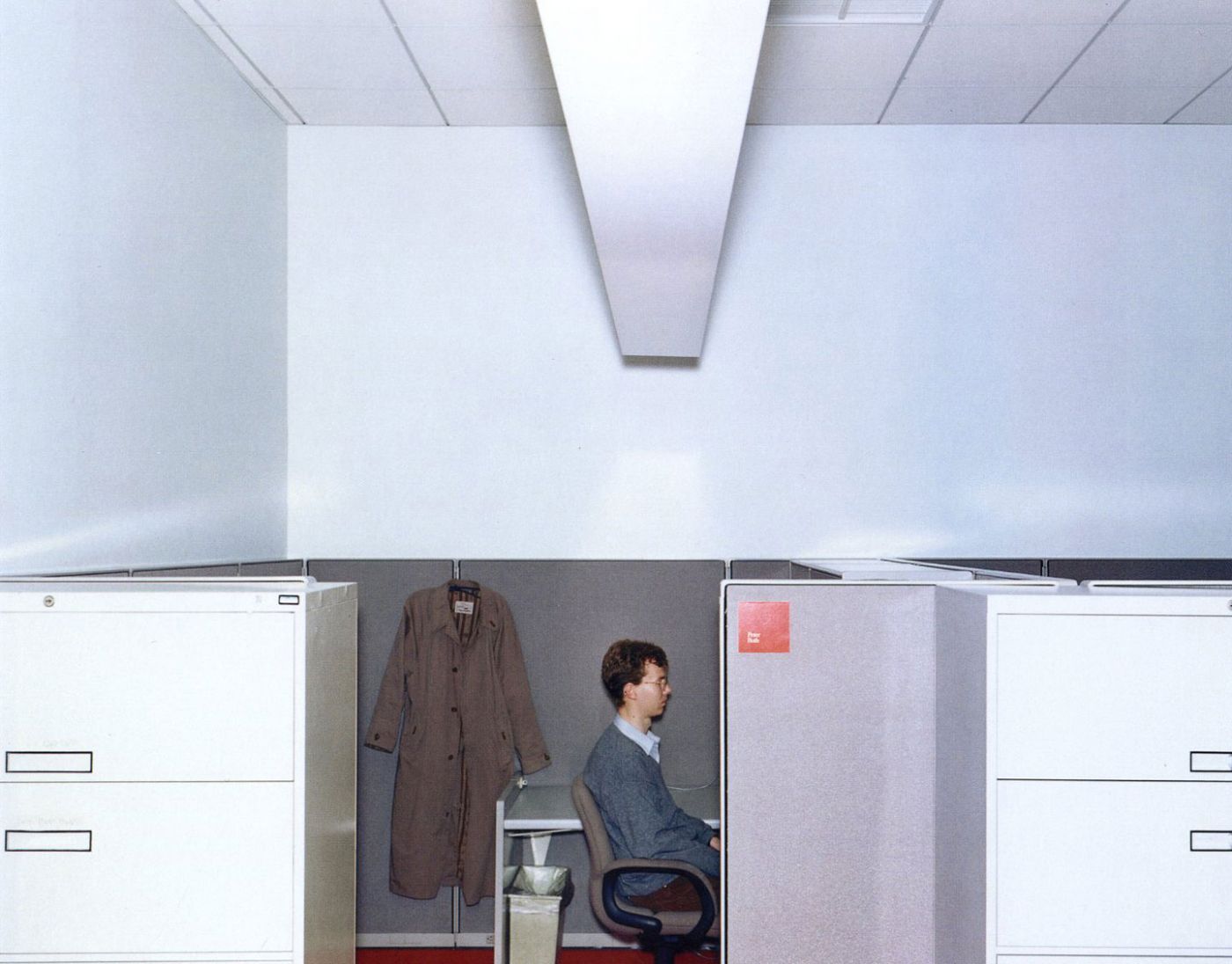 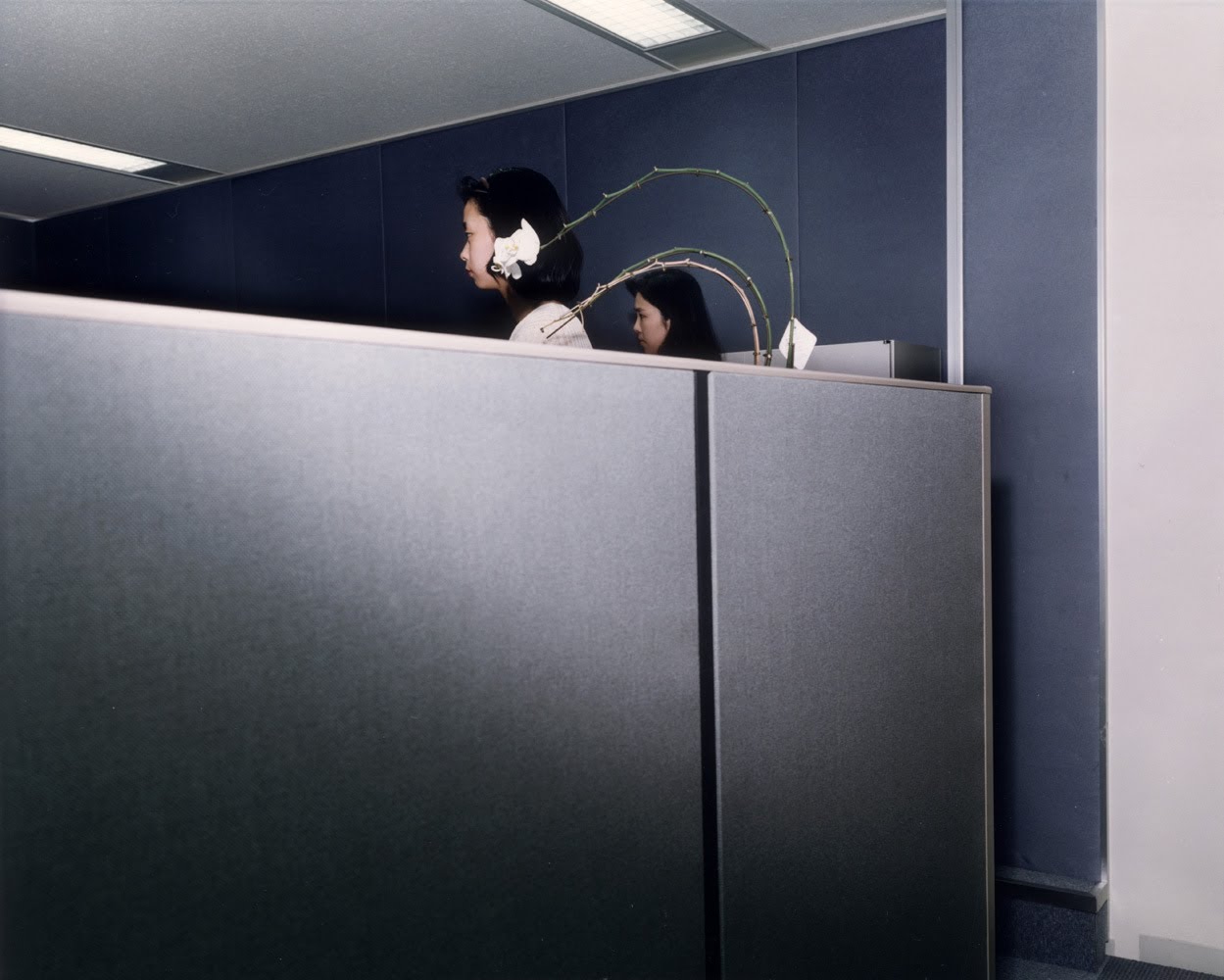 Tunbjörk’s depression may explain the barren cubicles or the picture of the birthday cake left abandoned, uncelebrated by a stern-faced row of stockbrokers.

Tunbjörk himself recognizes the oddity and sadness of his photographs. The sadness, he says, is a result of his own personal depression and the depression that’s an integral part of the Sweden he was raised in, where the winters are harsh and darkness stretches through much of the year. “Everything,” said Tunbjörk, “gets filtered through the artist’s eyes.”

Tunbjörk’s depression may explain the barren cubicles or the picture of the birthday cake left abandoned, uncelebrated by a stern-faced row of stockbrokers. But what about the oddity in his shots – the ultra-close-up of where the carpet meets the wall, the keen focus on a plate and spoon sitting on the floor at a car manufacturer?

“Oh,” said Tunbjörk, a touch of joy in his voice for the first time, “that is because I try to take photos like an alien, or a small child.” He recently gave his six-year-old daughter a point-and-click camera, he explained. “Now I try to photograph as she does, to look as she looks. She focuses on the strange pens she finds on the table, details I wouldn’t think of because they are commonplace to me, because I can see over them.” 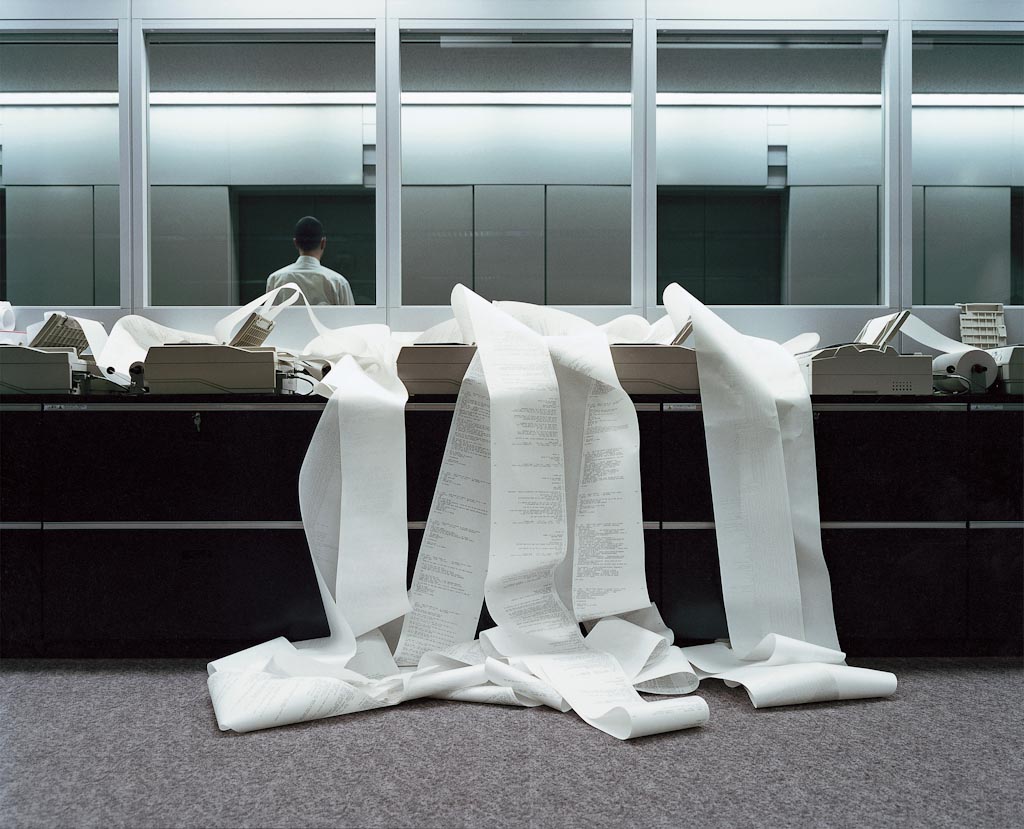 “When I photograph now,” he said, “I try to imagine that I’d never seen a place like this before.”

It’s that alien eye that Tunbjörk brings to the office which can bear surprisingly rich fruit because every once in a while he stumbles upon mysteries so bizarre, more conventional cameramen surely would have walked right past them without noticing. Viewers wade through Tunbjörk’s carpets and coffee tables until the mysteries hit them: Why is that man crouched under his desk, tucked between the wall and an aqua blue chair? Why is there a live moose standing in the corner cubicle, watching each businessman return to his desk with a lunch tray in hand?

Visiting the Nicholson Gallery in May with his keyboardist, rock ‘n’ roll drummer Joel Alpers thumbed through a book of Tunbjörk’s office pictures. He flipped past the moose, past the crouching man making the secret phone call, past the bank workers admiring the glass-enclosed salad. Alpers’ fingers stopped on one of the dozens of barren cubicle landscapes. He turned to keyboardist Justin Reinhardt with a derisive smirk.