“I’m not aware of rules. I’m sure they’re there, based on virtue of sensibility. I think sensibility imposes an organizing principle, a structure for how you work, but I don’t think I carry with me a set of…I guess rules is a pretty strict way of looking at it.”

Larry Sultan has pushed the boundaries of photographic practice since the publication of Evidence in 1977, a collaboration with Boston based photographer Mike Mandel, of found institutional photographs. Their collaboration over the years has produced numerous bodies of work such as redefined advertising billboards, municipal public art projects, and further negotiations of photographic archives.

In 1992, Sultan published his highly influential book on his family, Pictures From Home, and followed that up with The Valley, a look at the narratives surrounding adult film sets, in 2004. Sultan is currently working on a body of work combining the visual drama of the regional Californian landscape with the storylines of immigrant pioneers.

A longtime professor of photography, first at the SF Art Institute and now at the California College of Art in the Bay Area, Sultan spoke with Big Red writer Ben R. Sloat a day after his artist lecture at Mass Art.

BRS: Recalling your talk yesterday, I’m interested in how the first body of work (which became Evidence) can be thought of as a language-based deconstruction of photography versus later work, which has an intuitive creative impulse behind it. You’ve described the work in Evidence as “their facts and our (Sultan and Mike Mandel’s) poetry,” but the later work seems to be “your facts and your poetry.” 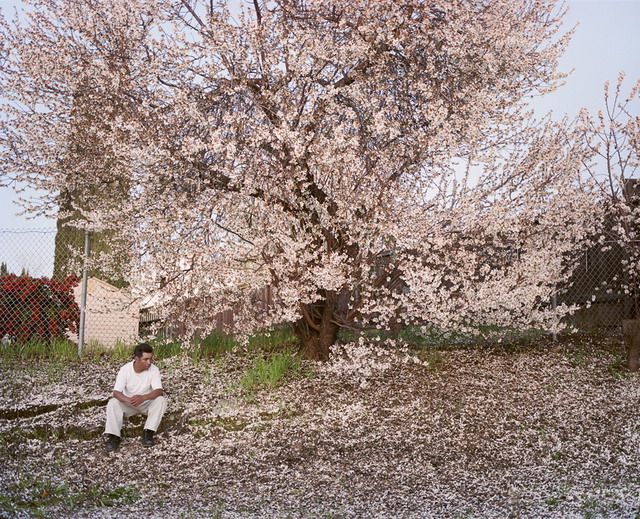 LS: Pictures From Home was informed by an understanding of the archive and the power that context exerts on how we read photographs. Weaving together my parents’ snapshots, film stills, business archives, and then my pictures of them was very much influenced by Evidence. The difference of course is that my own pictures figure predominately in Pictures From Home and stand in contest to the image/artifacts of my parents. But similar to Evidence the intentions of the project are to push at and extend notions of documentary practice. 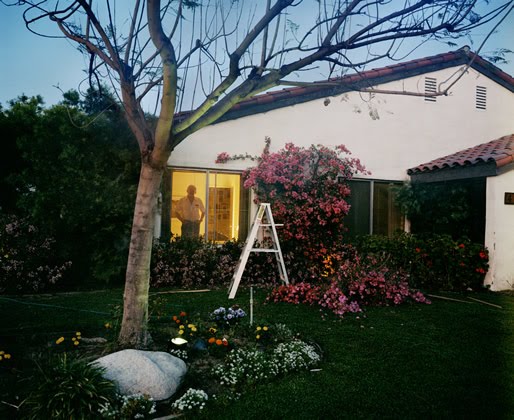 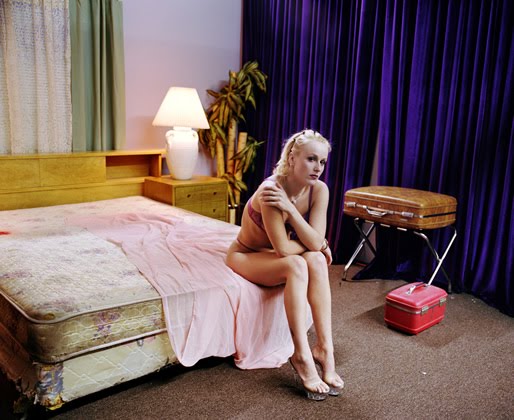 “Nostalgia is a big part of who I am. Even though I moved away from the San Fernando Valley when I was 17, I am continuously drawn back there photographically.”

While Evidence looks like it’s language based – and it’s certainly easier to speak about it as such – the process of selecting images and sequencing them into the book was very intuitive. It’s not so different really.

With The Valley and more recent work the signals that I started with are getting fainter and fainter as I progress. I guess the evolution of one’s work is to do things you haven’t done before, to try new strategies, to bring whatever your instincts are to a new kind of practice that has a different frame of reference.

BRS: You’ve talked about that process (of making Evidence) as being a “photographic scavenger” of the archive, now your process is quite different. Is there a set of rules or procedures you impose on making images now? Or how do you regard this shifting in your working method?

LS: I’m not aware of rules. I’m sure they’re there, based on virtue of sensibility. I think sensibility imposes an organizing principle, a structure for how you work, but I don’t think I carry with me a set of…I guess rules is a pretty strict way of looking at it. 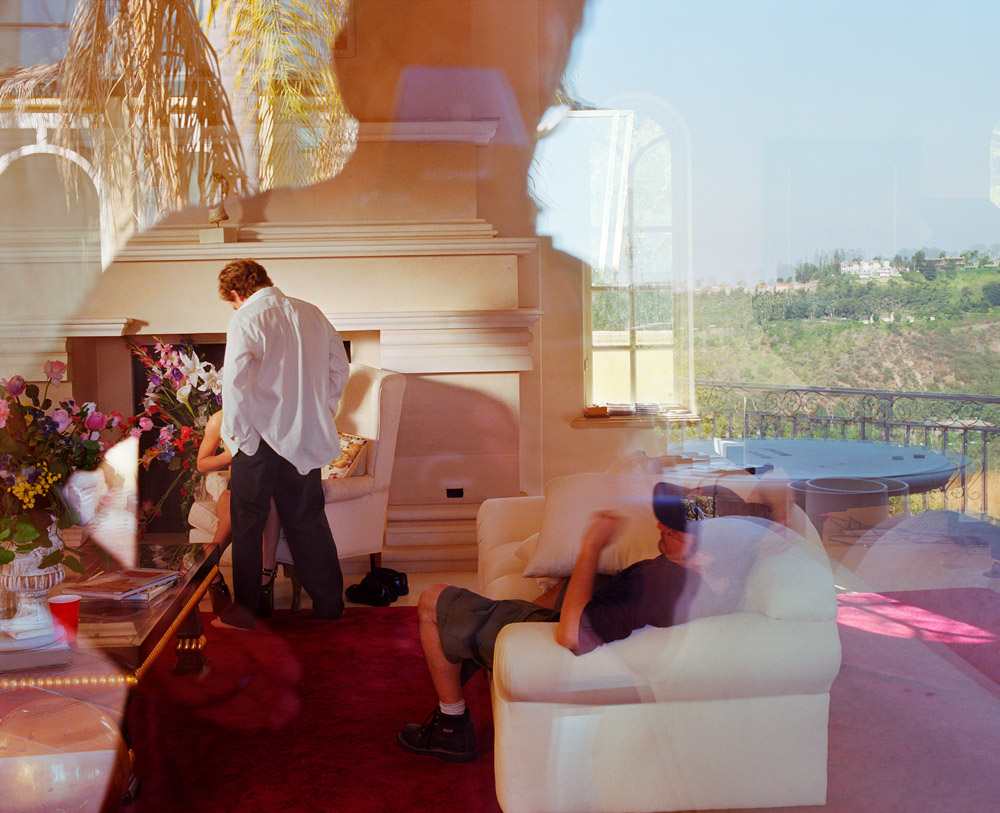 LS: The suburban terrain, both literally and also in terms of being an American photographer thinking about the daily, the ordinary — is what I go back to. I want to investigate the stereotype of the suburbs and complicate that stereotype, make it a richer field, something that isn’t filled with the assumption of generic lives.

BRS: You’ve also talked about Los Angeles as being kind of an Eden, a place people mythologize, aspire to go to. The last books of yours certainly treat it that way, but you don’t live in Los Angeles. Is the travel from the Bay Area a necessity in the making the work, is your displacement a crucial element in the images?

LS: Nostalgia is a big part of who I am. Even though I moved away from the San Fernando Valley when I was 17, I am continuously drawn back there photographically. Even now, I’m photographing in landscapes that are very familiar, where I used to play as a kid — the terrain of scruffy nature that lies between one suburban development and another. In that sense the landscape of my childhood and what has to stand for the staging ground American Dream intersect and allow me to explore both.

When I went elsewhere to shoot, I worked with a very clear intensity and no other obligations. My ordinary life was suspended. Now all my pictures are made within ten miles from my house. It’s hard to work at home. There’s no clear boundary, especially when you have a family. When do you go to work? The light may be best at seven o’clock, but I have open house at my son’s school, or I have to teach, or I have to take my dogs out…

BRS: I’m struck by how the new work has a strong ambiguity about it. You’ve mentioned how ambiguity is an important thing to activate the viewer, that if a photo has too explicit of a meaning, it becomes limited. You referenced painting as achieving that (ambiguity), as if the photo is so clear and literal in what it’s describing, there has to be a motion away from that in order to grab what’s elusive or uncanny about it.

LS: That’s really important to me. Part of the difficulty facing photographers is that almost any subject matter has accumulated a representational history, so to find a new discursive space, a space to wander around those subject matters, is a real challenge. If I know too much, if the narrative is too well formed, I’m making pictures that are illustrative, and as a maker, that’s not interesting. As a viewer, that’s not interesting. 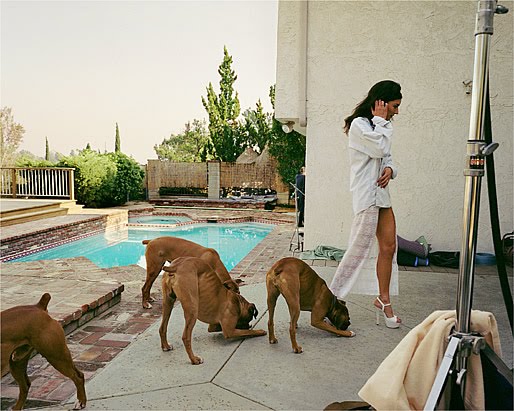 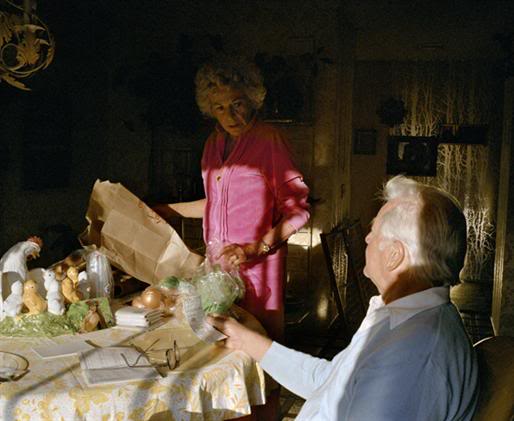 “I’ve always wanted to be a writer. The text to The Valley and the text to Pictures From Home were really important. I’ve actually thought about stopping photographing for a while and just writing, maybe that would get closer to the bone.”

In The Valley, I wasn’t interested in pornography as a phenomenon, but in how it uses domesticity as a narrative. The sex industry can be such a tired, worn out subject but when it’s imported into kitchens and dining rooms of a middle class suburban home something new opens up. At least for me it did.

BRS: Its seems that a photograph can be far beyond its visual representation, there’s something much more substantial there. I can relate to images of your father in a fairly emotional way, and it’s very hard to explain what that quality is, and how that functions so differently from journalistic type documentary work. How is this something that you can teach, or share with students?

LS: You can’t! I think you can help the student define a practice that’s generative — that generates more pictures and a discovery process. A crucial point is to find names for what you do and what your interests are – to tell yourself a story. But when it comes down to making work that really sings, I don’t know if I can teach any of it. I don’t even know if I can do any of it half the time. It’s so much about failure, it’s so much about making pictures that are so utterly boring and overstated, you’re endlessly disappointed. And in that process you hopefully find something that draws you back and calls to you. You just look at that picture and it tells you something that you didn’t know. I try to engender that kind of open-ended discovery process and ask questions that generate an intensity of looking, and writing and thinking.

BRS: There seems to be a model, in the art world and especially in academia, of relating photography in terms of language. Though photography can be a non-verbal experience to a certain degree, it seems that language is often imposed on top of it. Then I wonder about the tension between the analytical mind that can critically look at a photograph versus the creative mind that can produce it. Can a photo be made from a point of view of a deconstruction?

LS: You can, and some people have done beautifully at inventing a practice around deconstruction and analytical investigation. It’s not really the way I work, but I think the question is a larger one, about how we teach photography and learn photography.

If you’re a painting student, the instructor can come in and push your hand, say, “do this” or “try this kind of strategy”. It’s an immediate intervention. We usually don’t go out and physically make pictures together, so we can only help the student once the picture is made through discussion, through language.

It doesn’t have to be an analytic process. Literature especially has an interesting relationship photography – to observation, to description, to fiction: taking something that you see and elaborating, jamming, and I think, staging. That weird practice between staging and finding is very much like a Ray Carver (story). You think, “he’s seen this,” but he’s taking that moment of observation and letting it go, giving it some wings, following it, rather than nailing it. You’re riffing off of reality.

I’ve always wanted to be a writer. The text to The Valley and the text to Pictures From Home were really important. I’ve actually thought about stopping photographing for a while and just writing, maybe that would get closer to the bone.

BRS: Thinking about The Valley and Pictures From Home, it seems that the distinctive light of Los Angeles is itself a character. I know that whenever I watch an outdoor scene from Seinfeld I always think: “look how flat and bright the light is, it’s so obviously Los Angeles! How could anybody believe that’s New York?”

LS: L.A. light, that kind of foggy, smoggy, soft light—I miss that. It’s the light of my childhood. There are certain sounds, feelings of the air, and all of that which you can’t photograph but you can find the equivalent of, in light.

But who knows, maybe I can find a new version of that in Northern California.

Brought to ASX by:

(© Ben Sloat, 2008. All rights reserved. All images © copyright the photographer and/or publisher)