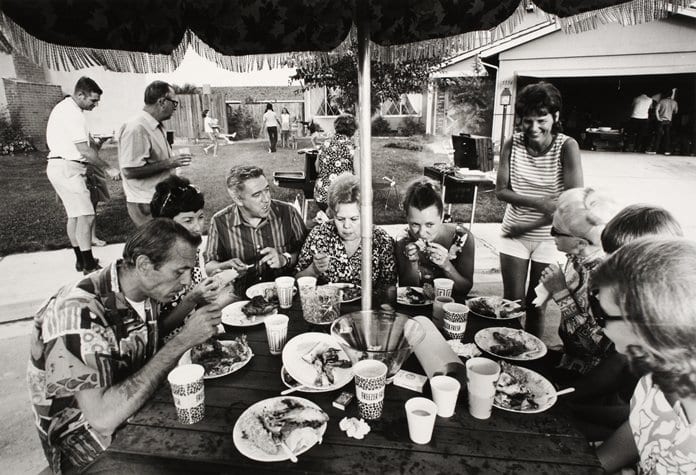 Fourth of July Block Party, 1970 from the series Suburbia

Though conspicuously absent from public collections, Bill Owens’ photo-chronicles of middle America belong alongside those of the better known “social landscape” photographers of the ’60s and ’70s: Diane Arbus, Bruce Davidson, Lee Friedlander, and Gary Winogrand. Why Owens has slipped through the net is hard to tell. Admittedly Owens’ subject–the quotidian as sanctified in form and ritual–lacks the instantaneous allure or fashion quotient of Davidson’s subcultures or Arbus’ freak shows. Also perhaps the texts that often accompany his images work better in the book form of Suburbia, 1968-72, Working (I do it for the Money), 1974-75, and Our Kind of People, 1969-74 (now out of print) than they do on gallery walls. None of which adequately explains the fact that this was his first solo show after nearly two decades of art-world indifference during which Owens all but stopped taking photographs.

The collected photographs and texts provide both a tender and sociologically astute portrait of middle America in the late ’60s and early ’70s. Six years of photojournalism in the Bay Area not only honed Owens’ sense of the decisive moment but also afforded him direct contact with the new backbone of America: the culture that grew out of the tens of thousands of tract homes built in the ’50s and ’60s. In the suburbs he recorded the pioneers of a new culture based on the celebration of prosperity and the invention of social mores. A boy astride the sole tree in a grassy island all but engulfed by asphalt and concrete defoliates it leaf by leaf in anticipation of the fall: “My father thinks its a good idea . . . I think he’s crazy.” Capturing the neutral humor of the strange made routine, Owens refuses the satirical savagery often used to color depictions of the suburbs. A mother and son worthy of a Mike Leigh movie, pose proudly in a front room featuring an audacious display of Italian sirocco floral designs over a Palos Verde rock fireplace. But the camera is never used as a lepidopterist’s pin: the evident willingness of his subjects to be photographed indicates less a pretension to uniqueness than the satisfaction of the disenfranchised in rejoining the community of representation. 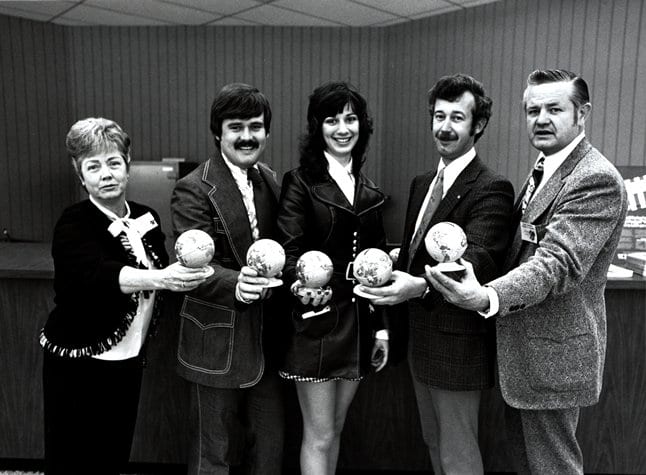 World Savings opening day 1975, from the series Working (I Do It For The Money)

What is shocking about these works is precisely the invisibility of the culture that they portray. It is a landscape of generalized eccentricity, inhabited by people neither fired by ambition nor fueled by repression. Exported from the city, the ideal of the utopian dwelling has been purged of history and been given expression in total-effect bedrooms, perfectly dusted figgle-leaf fig plants, and the religion of the here and now. Freedom here has no static or negative definition but is enshrined in instruments that possess the dual functions of leisure and locomotion–the boats, bikes, and RVs that fill the circular driveways and garages–and in the spectacle of transit: “Our home is built with the living room in the back, so in the evenings we sit out in front of the garage and watch traffic go by.” Piercing the myth of freedom as mobility, Owens finds the kinetiC force of the metropolis reincarnated as the nuclear well-being of the suburbs.

Recorded is an achieved utopia guarded by a new bourgeoisie, which, rather than having sold its soul to the devil of materialism, has just carpeted it wall-to-wall. Journeying into this deep-pile interior, Owens finds no heart of darkness–nothing sinister beneath the curlers, flammable slacks, and barbecue fetishes. Quietly and without proselytizing, the protagonists of the easy-does-it apocalypse perturb our enshrinement of urban angst and nonconformity. After all, it just might be the case that “the best way to help your city government and have fun is to come out on a Saturday morning and pull weeds in a median strip.”

(© Neville Wakefield. All rights reserved. All images © copyright the photographer and/or publisher)