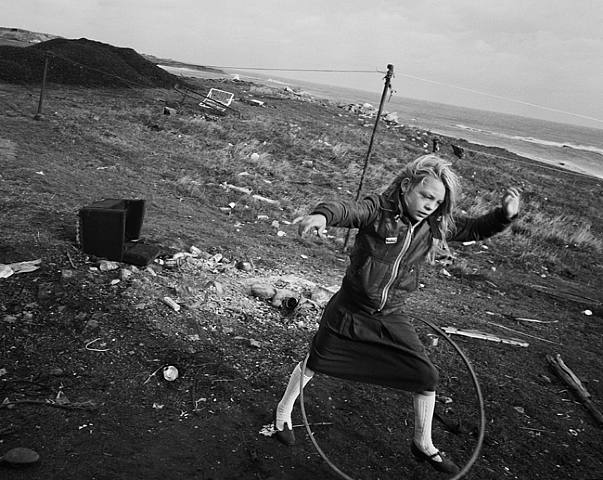 His affection for the land and its people never blinded him to the toughness of ordinary existence.

By Richard Cork, Review of Another Country at Serpentine Gallery, September 12, 1985

The hardship. bitterness and despair of unemployment usually seem far removed from the Serpentine Gallery’s green placidity Looking out of its windows towards Kensington Gardens in high summer, visitors could be forgiven for imagining that economic blight and urban dereliction play no part in contemporary Britain. So it is quite a shock to turn away from dappled parkland views and encounter, on the gallery walls, an uncompromising survey of life in north-east England. Chris Killip and Graham Smith, who display their photographs side by side in this powerful exhibition, call it Another Country, I can see why. The world they explore is a narrowly circumscribed one. hit by the severest effects of recession and monetarist harshness. Killip is best known for an earlier study, in the Paul Strand tradition, of the Isle of Man. His affection for the land and its people never blinded him to the toughness of ordinary existence. But now he has exchanged his native island for an altogether more desolate locale.The open skies and dignified isolation so evident in his Isle of Man photographs give way here to a sense of paralysis and futility. 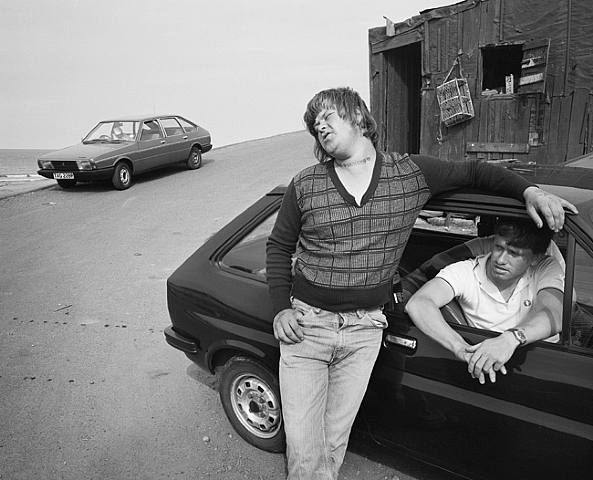 A picture oft Tyneside supermarket is filled to choking-point with solid ranks of baked-beans cans, massed around a notice which promotes a ‘Heinz Beans Free Offer — “World of Survival” Wildlife Kit’. It is a grimly appropriate announcement. Life for the people in Killip photographs is primarily a matter of getting through the day without succumbing to terminal lassitude.The sea forms a backdrop to his studies of Lynemouth and the fishing village of Skillingrove. but no one seems able to take any pleasure in it. Rocker and Rosie, buttoned and hooded against the Wind, are too tired to take much notice of the waves in the distance. Hands smeared black, they pause for breath on the journey home with a consignment of seacoal. Rosie seems resigned to a gruelling and meagre existence, and the residual strength in her weatherbeaten face suggests that she will continue to struggle for a livelihood. On Whitehaven Beach, by contrast, local youths gather in an aimless group and kill time by sniffing glue.The ritual is carried out in a desultory way, as if the sniffers themselves acknowledge its pointlessness.

Life for the people in Killip photographs is primarily a matter of getting through the day without succumbing to terminal lassitude.

But what options are open to them? Judging by Killip’s close-up study called North East Coast, the beach offers little except pollution and detritus. Broken bottles, bones and a discarded contraceptive outnumber the shells, and the mood does not shift very significantly when Killip turns his attention inland. A man carrying a child on his shoulders in Scottswood Road, Newcastle, seems at first to be smiling as he stares into the distance. But closer inspection discloses that he is contorting his face against the glare of a day which probably promises him nothing. Time and again. similar moments of apparent optimism turn out to be countered by darker considerations. Although a girl called Helen seems to be enjoying her hoola-hoop, she is obliged to play with it on a dispiriting stretch of waste ground heaped with rubbish. Elsewhere, in a photograph called New Year’s Day, a Father celebrates by cuddling his daughter in a caravan. But even here another girl, half cut off by the edge of the picture, looks on pensively as if oppressed by the knowledge that their happiness only has a momentary significance. 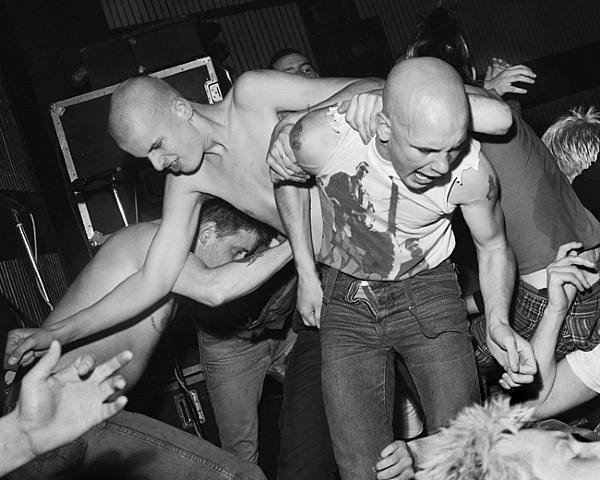 The unease is so pervasive in Killip’s work that his one scene of full-blooded enjoyment also turns out to be the most sinister in in implications. Concert, Sunderland is the terse title for an extraordinary image, where the flashlight illuminates a tangle of semi-naked figures presumably swaying to the music. One shaven-headed dancer, his ear pierced with a variety of rinp and pins, lurches to the left and bunches his hand into a fist. Another figure, stripped to the waist and baring the word ‘Angelic’ under his nipple, dives towards his neighbours like a rugby player barging into a scrum. But the photograph is dominated by a youth who leans forward and yells, braces dangling round his waist and zipper brazenly open. Two hands appear to be restraining him or preventing him from falling, and all over the picture a strange choreography of arms and fingers can be seen. Clutching, pointing, pushing and clenching, they signify a peculiar blend of intimacy and aggression. So far as I can tell, the sweat-stained boisterousness displayed here is quite harmless. But Killip’s observant and understanding eye is sharp enough to reveal the pent-up violence in these on flailing bodies — a violence which could easily erupt at a football match or a street-gang confrontation.

The unease is so pervasive in Killip’s work that his one scene of full-blooded enjoyment also turns out to be the most sinister in in implications.

His co-exhibitor, Graham Smith, sometimes takes a more humorous view. Sticking to the pubs and clubs of Gina Corner, the down-at-heel area of Middlesbrough where he grew up, Smith relishes the comedy of Eddie sitting alone with a pint perched comfortably on his ample paunch. He enjoys catching his father’s aghast expression at the precise moment when Smith Senior loses a bet on the Grand National, and he encourages pub regulars to adopt theatrical poses. Realizing his camera is there, a few of them play up to it. But I preferred the photographs which do not only on people’s awareness of the watching lens to give them interest. One of Smith’s pictures bears the memorable title I thought I saw Liz Taylor and Bob Mitchum in the back room of the ‘Comical’. On this occasion, though, the drinkers in question seem unconscious of their look-alike potential. Nor does their claim need to be pressed. It is enough that Smith was on hand to record their bizarre resemblance, and his long familiarity with the neighbourhood means that they are pre-pared to accept his inquisitive presence. He even felt able to stop a couple in the street, ask the wife to hold up her giant picture of Elvis while her husband minds a pram weighed down with assorted household belongings, and then title the photograph What she wanted and who she got. 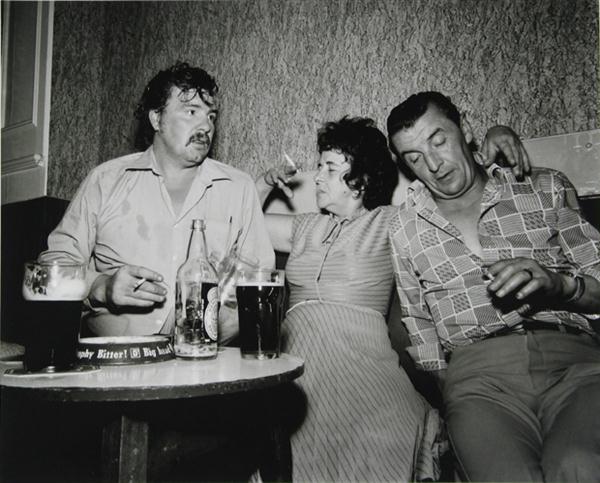 There is a robust, music-hall cheekiness about such strategies which marks Smith out from the more austere Killip, and yet both men hang together uncannily well at the Serpentine .They share a determination to examine, with straightforward and unpretentious honesty, the everyday life of a society in sad decline.Their determination to focus only on the aspects they really now about leads them into repetitiveness, and the show could have benefited from more rigorous editing. I came across too many photographs of boozers at shabby corner tables, and abject figures slumped on benches. The photographers would probably claim that the monotony induced by these recurrent images makes its own point. But I would have preferred a pared-down selection, so that the disconcerting impact of Another Country could be registered with even greater force among the trees and flowerbeds of a more privileged England.