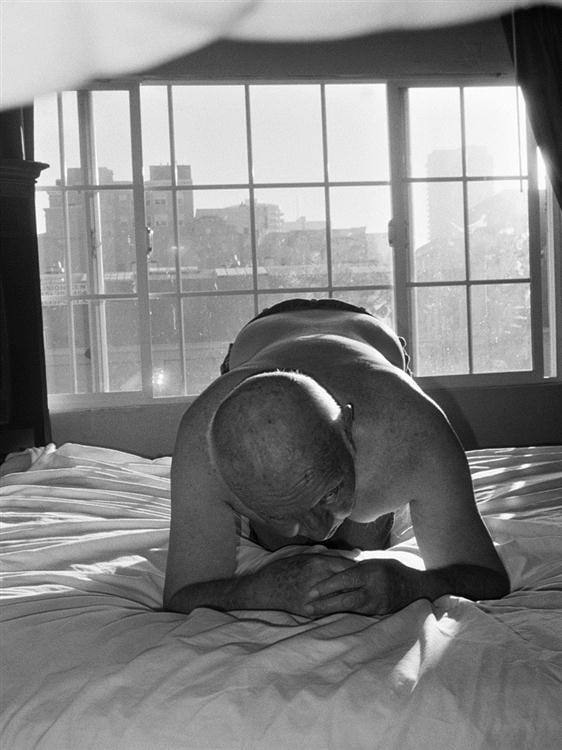 J.W. Fisher: I probably should begin by stating that I feel very fortunate to have seen Lifting Water through it’s various stages from concept, to image-making, to editing, and final sequence. Would you mind talking about the cultivation of ideas for the TBW book project?

Dru Donovan: I wanted to make a body of work that dealt with my friend’s illness. I didn’t want, nor could I make, photographs that recorded the actual care-taking by his family and friends. The experience was too personal, too intimate, and rarely do I photograph in an observational way. After he died mourning became disorienting and I began to reflect on what had happened during those months we took care of him. I needed to photograph to help me cope with and begin to understand loss.

JWF: So rather than photographing the actual events, you recreated specific moments of care-taking and made pictures of what you had experienced during this time?

DD: I use photography to look, interact, escape, control and be invited in and I decided that reinvestigating these moments in a similar way would help me make visual sense of what had happened. The act of revisiting and looking at these different gestures and then making photographs of these directed moments helped me to work through the mourning process and the complexities of the situation.

JWF: In Lifting Water you looked at these rituals removed from the events without the actual people and location. How did the work take form?

DD: For multiple weekends in a row I rented the same motel room and assembled a cast where the main character remained the same, but the “caretakers” changed. I placed ads looking for models; any sex, age, size or race. Once I assembled the cast, I asked the models to reenact over and over very small scenes I remembered so clearly during my friend’s illness: helping him out of bed, walking him to the bathroom, giving him a glass of water, helping him back into bed, changing his shirt, washing his back.

JWF: Looking at the pictures now I see an exacting direction toward the gestures of care-taking. Yet the cast seems arbitrary. How important was it to attempt to recreate exactly what you experienced?

DD: I did feel it was important to visually represent the events that I remembered, but it wasn’t important that the models look like any of the family or friends involved during that time. I knew I couldn’t, nor did I want, to involve any of them during the making of the work. However, the model that I ended up using as the main character had gone through a similar experience, taking care of his mother and sister when they were dying. 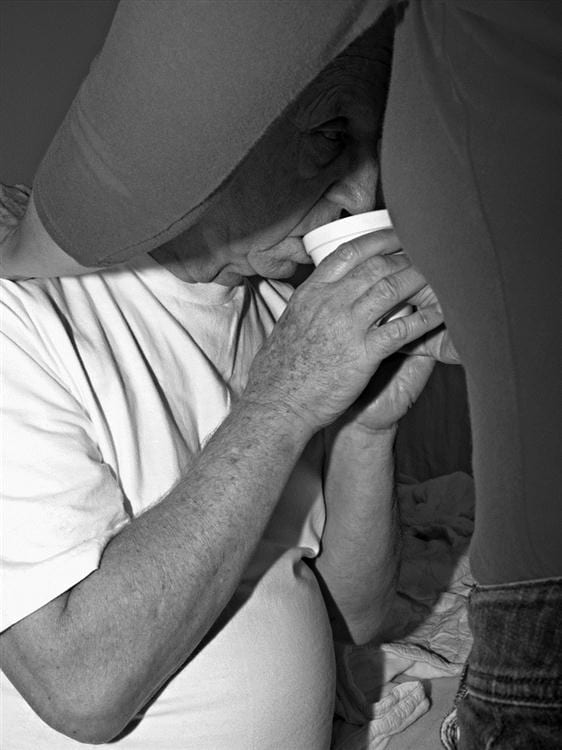 JWF: How did this one model’s own experience inform the shoots and the work? Why was it important that he could relate to your experience?

DD: It was key. He understood how the body changes and shuts down during illness. He knew how heavy the body gets, how much help one needs. He actually started to direct the other models that played the roll of the caretakers if they were holding him incorrectly or giving him enough support. It wasn’t just the fact they he physically understood how to revisit these gestures, he also helped me to realize that although losing someone is a very personal experience it is also a universal one.

JWF: Were you conscious of trying to express your own experience while at the same time offer a universal one?

DD: Not at first, I was focused on figuring out my own experience. I needed to see what the scene looked like from different points of view photographically, not just my own, but I wasn’t initially thinking about the common experience of loss.

DD: Repetition was very important because I was trying to figure out how to make different kinds of photographs of these moments. I also chose to photograph using three different camera formats; a 4×5 view camera, a digital SLR and 35mm point and shoot. I intended on the shift of camera format and point of view to break up any redundancy. I have heard it said, and I would agree, that a 4×5 photographs the air in the room because of the large size of the negative. The 4×5 is the camera I’m most comfortable using. At times, however, I wondered if it described too clearly a situation that often felt hazy and out of control. A digital SLR loosened up the pictures and I was able to work faster. The 35mm point and shoot referenced snap shots, photos taken at home, and was the least precise tool I used. It had grain and didn’t show the space or bodies in great detail. I even wondered if the photographs would look like I had made them.

JWF: So with the use of multiple formats you were also able to accomplish a level of ambiguity?

DD: I was interested in using different formats because I simply wanted to see what the event looked like as a photograph. I hoped the multiple formats offered up different perspectives. This is why I asked you to photograph while I was photographing. I wanted to stay open to the possibility that one of your pictures, like the one that ended up in the book where everyone in the scene looks physically exhausted while I continued to photograph, would show the set, the fiction. Revealing the construction of the book was an important shift.

JWF: Do you think that reality of your experience was in conflict with the fictionalized approach to the work?

DD: I wanted the images to feel real because then I might be able to better understand what had happened. On the other hand, I wanted the reenactment to not feel familiar because it would prove that this loss changed every part of my reality and nothing could recreate, replace or change what had happened. I realized the work would not resolve the pain.

JWF: How did you come up with the title Lifting Water? It seems everyday and impossible at the same time. I liked that it is layered with multiple meanings; the literal lifting of water to drink, the idea of holding the body that mostly consists of water, the obvious religious references.

DD: Yes, I thought of the idea of trying to lift water with your hands, but by the time the water reaches your chest or mouth most of it would have run through your fingers. The notion of lifting water seems almost impossible. As if the action, no matter how hard one tries, would result in something out of one’s control.

JWF: Why did you decide to reinvestigate this personal experience?

DD: Because it really was the only subject I could look into at the time. It had affected my life so significantly that if I hadn’t made Lifting Water I fear I would’ve avoided dealing with his loss. The truth is, as excited as I am to have Lifting Water published, I also feel conflicted. The loss of my friend was also the loss of my teacher and mentor. Ever since I was first a student in his class, there’s nothing I’ve made that I haven’t shown him. It has been incredibly hard to put this work in the world without sharing it with him. I’ve tried to ask myself the same questions I think he would have asked. But, it’s not the answers I am looking for – it’s the whole conversation I deeply miss.

Posted in Interviews - All, Other and tagged Dru Donovan, Interview, TBW Books.