First of all, the pictures are unforgettable – photography’s ultimate standard of value.

Introduction text to Bellocq: Photographs from Storyville, the Red-Light District of New Orleans

First of all, the pictures are unforgettable – photography’s ultimate standard of value. And it’s not hard to see why the trove of glass negatives by a hitherto unknown photographer working in New Orleans in the early years of this century became one of the most admired recoveries in photography’s widening, ever incomplete history. Eighty-nine glass plates in varying states of corrosion, shatter, and defacement was the treasure that Lee Friedlander came across in New Orleans in the late 1950s and eventually purchased. When, in 1970, a selection of the ingeniously developed, superb prints Friedlander had made was published by the Museum of Modern Art, the book became, deservedly, an instant classic. So much about these pictures affirms current taste: the low-life material; the near mythic provenance (Storyville); the informal, anti-art look, which accords with the virtual anonymity of the photographer and the real anonymity of his sitters; their status as objets trouves, and a gift from the past. Add to this what is decidedly unfashionable about the pictures: the plausibility and friendliness of their version of the photographer’s troubling, highly conventional subject. And because the subject is so conventional, the photographer’s relaxed way of looking seems that much more distinctive. If there had once been more than eighty-nine glass negatives and one day a few others turned up anywhere in the world, no one would fail to recognize a Bellocq.

The year is 1912, but we would not be surprised to be told that the pictures were taken in 1901, when Theodore Dreiser began writing Jennie Gerhardt, or in 1899, when Kate Chopin published The Awakening, or in 1889, the year Dreiser set the start of his first novel, Sister Carrie – the ballooning clothes and plump bodies could be dated anywhere from 1880 to the beginning of World War I. The charges of indecency that greeted Chopin’s only novel and Dreiser’s first were so unrelenting that Chopin retreated from literature and Dreiser faltered. (Anticipating more such attacks, Dreiser, after beginning his great second novel in 1901, put it aside for a decade.) Bellocq’s photographs belong to this same world of anti-formulaic, anti-salacious sympathy for “fallen” women, though in his case we can only speculate about the origin of that sympathy. For we know nothing about the author of these pictures except what some old cronies of Bellocq told Friedlander: that he had no other interests except photography; that “he always behaved polite” (this from one of his Storyville sitters); that he spoke with a “terrific” French accent; and that he was – shades of Toulouse-Lautrec – hydrocephalic and dwarf-like. Lest the association induce us to imagine Bellocq as a belle époque erotomane who had transplanted himself to the humid franco-creole American city to continue his voyeuristic haunting of bordellos, it might be mentioned that Bellocq also frequented the opium dens of New Orleans’s Chinatown with his camera. The Chinatown series, alas, has never been recovered. 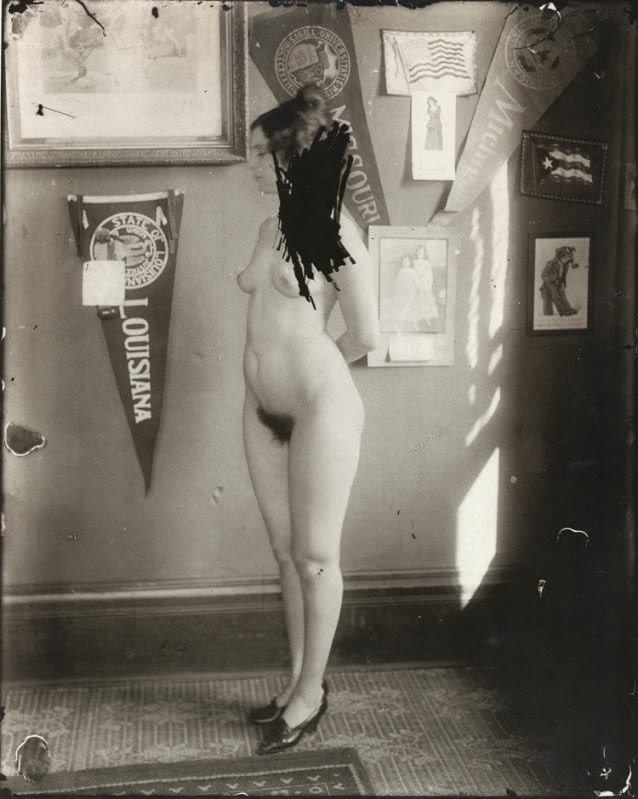 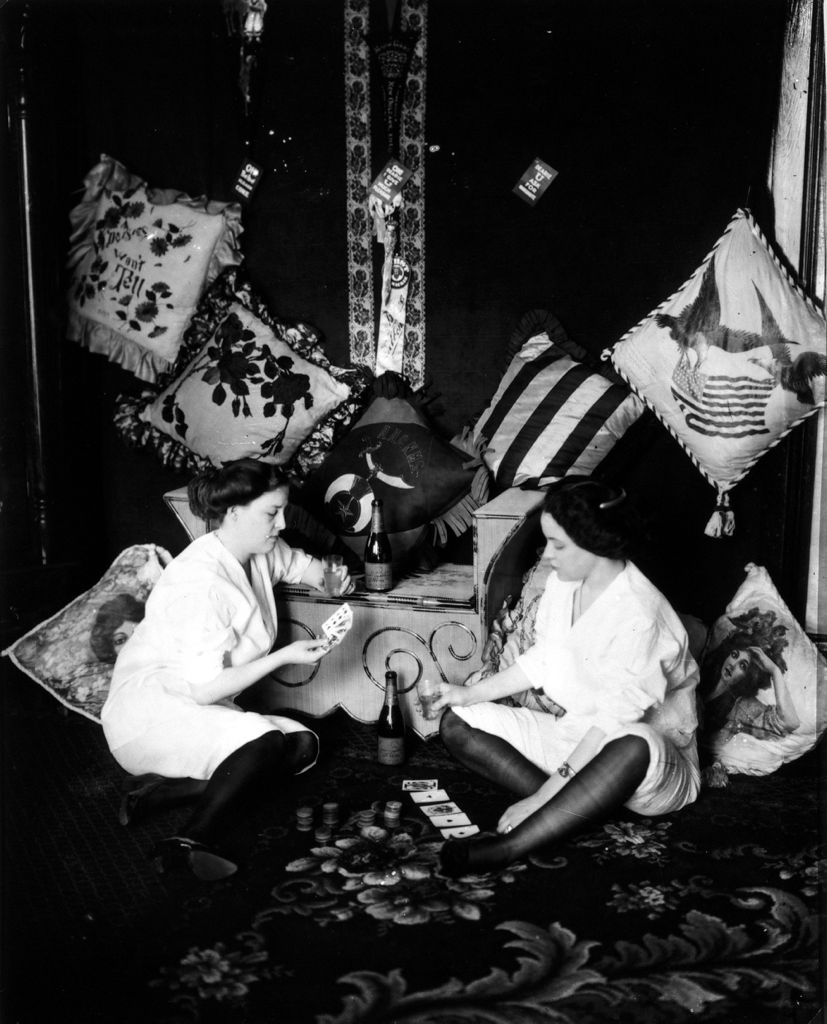 How far we are, in Bellocq’s company, from the staged sadomasochistic hijinks of the bound women offering themselves up to the male gaze (or worse) in the disturbingly acclaimed photographs of Nobuyoshi Araki or the cooler, more stylish, unvaryingly intelligent lewdness of the images devised by Helmut Newton.

The Storyville series (in this new enlarged edition) includes two pictures of parlor decor. The interest for Bellocq must have been that, above a fireplace in one picture and a rolltop desk in the other, the walls are covered with photographs surrounding a central painting, photographs with the same contrasts as the ones he was taking: all are of women, some dressed to the nines, some erotically naked. The rest of Bellocq’s photographs are individual portraits. That is, there is a single subject per picture, except for a shot of two champagne drinkers on the floor absorbed in a card game (there is a similar off-duty moment in Bunuel’s unconvincing, notional portrait of a brothel in Belle de Jour) and another of a demure girl posing in her Sunday best, long white dress and jacket and hat, beside an iron bed in which someone is sleeping. Typically – an exception is this picture, which shows only the sleeping woman’s head and right arm – Bellocq photographs his subjects in full figure, though sometimes a seated figure will be cut off at the knees; in only one picture – a naked woman reclining on some embroidered pi – does one have the feeling that Bellocq has chosen to come close. Central to the effect the pictures make on us is that there are a large number of them, with the same setting and cast in a variety of poses, from the most natural to the most self-conscious, and degrees of dress/undress. That they are part of a series is what gives the photographs their integrity, their depth, their meaning. Each individual picture is informed by the meaning that attaches to the whole group.

The only pictures that do seem salacious – or convey something of the meanness and abjection of a prostitute’s life – are those on which the faces have been scratched out.

Most obviously, it could not be detected from at least a third of the pictures that the women are inmates of a brothel. Some are fully clothed: in one picture a woman in a large feathered hat, long-sleeved white blouse adorned with brooch and locket, and black skirt sits in the yard in front of a low black backdrop, just beyond which frayed towels are drying on a laundry line. Others are in their underwear or something like it: one poses on a chair, her hands clasped behind her head, wearing a comical-looking body stocking. Many are photographed naked – with unpretentious candor about, mostly, unpretentious bodies. Some just stand there, as if they didn’t know what to do once they had taken off their clothes for the camera. Only a few offer a voluptuous pose, like the long-tressed adolescent odalisque on a wicker divan – probably Bellocq’s best known picture. Two photographs show women wearing masks. One is a come-hither picture: an exceptionally pretty woman with a dazzling smile reclines on a chaise-longue; apart from her trim Zorro-style mask she is wearing only black stockings. The other picture, the opposite of a pin-up, is of a large-bellied, entirely naked woman whose mask sits as awkwardly on her face as she is awkwardly posed on the edge of a wooden chair; the mask (it appears to be a full mask minus its lower half) seems too big for her face. The first woman seems happy to pose (as, given her charms, well she might); the second seems diminished, even foiled, by her nudity. In some pictures, in which the sitters adopt a genteely pensive look, the emotion is harder to read. But in others there is little doubt that posing is a game, and fun: the woman in the shawl and vivid striped stockings sitting beside her bottle of “Raleigh Rye,” appreciatively eyeing her raised glass; the woman in ample undergarments and black stockings stretched out on her stomach over an ironing board set up in the backyard, beaming at a tiny dog. Clearly, no one was being spied on, everyone was a willing subject. And Bellocq couldn’t have dictated to them how they should pose – whether to exhibit themselves as they might for a customer or, absent the customers, as the wholesome-looking country women most of them undoubtedly were.

How far we are, in Bellocq’s company, from the staged sadomasochistic hijinks of the bound women offering themselves up to the male gaze (or worse) in the disturbingly acclaimed photographs of Nobuyoshi Araki or the cooler, more stylish, unvaryingly intelligent lewdness of the images devised by Helmut Newton. The only pictures that do seem salacious – or convey something of the meanness and abjection of a prostitute’s life – are those (eleven in this selection) on which the faces have been scratched out. (In one, the vandal – could it have been Bellocq himself? – missed the face.) These pictures are actually painful to look at, at least for this viewer. But then I am a woman and, unlike many men who look at these pictures, find nothing romantic about prostitution. That part of the subject I do take pleasure in is the beauty and forthright presence of many of the women, photographed in homely circumstances that affirm both sensuality and domestic case, and the tangibleness of their vanished world. How touching, good natured, and respectful these pictures are. What a splendid gift Lee Friedlander has given us.