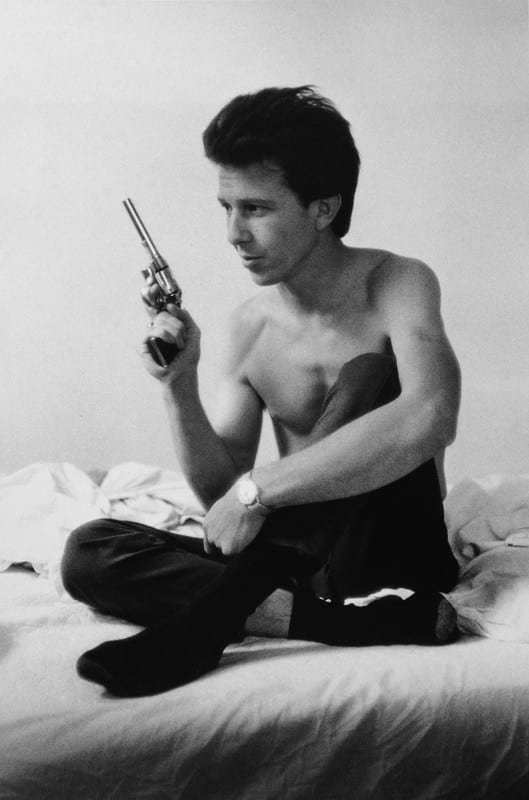 The conformity that saturated American society in the postwar 1950s created unreal expectations among the population due to the media’s use of advertisements and television shows to portray an orderly lifestyle full of hope and promise within the growing strength of capitalism. Beginning in 1963, Larry Clark carved out a niche in photography that reflected the consequences of adolescent dysfunction. By striking a chord with the riddles that ran beneath mainstream society, these images successfully captured the emptiness of the American Dream. However it was not until 1971 that Clark shocked the nation with the publication of “Tulsa” (1963-71)–a photographic series that depicts young men shooting up drugs, driving cars, playing with guns and engaging in violence. The same year Hunter Thompson published his own search for the American Dream titled Fear and Loathing in Las Vegas (1971), but unlike Clark who was demystified by the midwest from the start. Thompson came back from his venture empty-handed, having experienced nothing extraordinary beyond the dull, erratic subculture that was visually narrated by Clark. The retrospective of Clark’s work at the International Center of Photography in New York City features an array of photographs that were taken over the course of 35 years and bear witness to the evolution of alternative youth within our society.

The exhibition opens with a simple, cryptic lower-case sentence that was published in Tulsa: “i was born in tulsa oklahoma in 1943, when i was sixteen i started shooting amphetamine, i shot with my friends everyday for three years and then left town but i’ve gone back through the years, once the needle goes in it never comes out. L.C.” Initially centered upon a group of young men who inject themselves with drugs, this narrative of black and white images unfolds from 1963 to 1971. Women are introduced into this lengthy story as either unfortunate bystanders or the bearers of unwanted pregnancies. For instance, in one picture a woman lies in bed with a black eye while in another she allows her boyfriend to inject her with amphetamines. A separate photograph represents the silhouette of a pregnant woman shooting up.

Another quote, “death is more perfect than life,” appears next to an image of a young man sitting on a bed with a gun in hand. Beneath the photograph Clark added “dead 1970.” The tragic hopelessness that dominated much of alternative youth contrasted sharply with the image that American families tried to represent to one another. However within the narrow scope of bohemian life that Clark portrays, any representation of mainstream society, such as the police, is made to appear as an extension of fascism. One photograph represents a threatening message left for officers by Clark’s friend David Roper, while another, situated beyond the photograph of an infant’s funeral, features a fight that breaks out against a police informer. 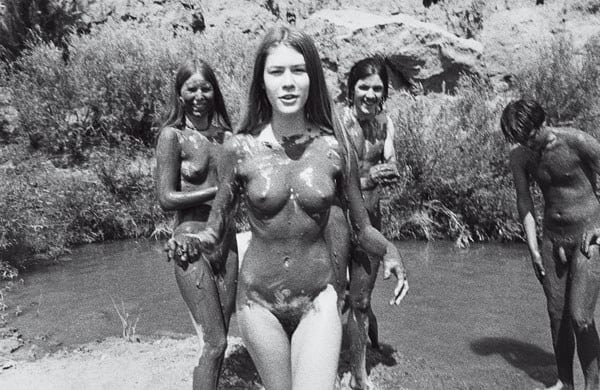 Teenage Lust (1958-1983) begins with images of Clark as a youth in Oklahoma. Using his youth as a point of departure for this series, the photographer seeks to keep himself connected to a subculture that was already 30 years younger than him. Even though Clark seeks to make this series cumulative from 1958 to 1983, most of the images were taken in the 1970s and ’80s. Marking his move to New York City from the midwest, Clark explored sexual passion and identification between young boys and girls: oral sex, menage-a-trois and various other forms of copulation appear throughout this series.

This group of photographs concludes with portraits of teenage hustlers in New York City. Although Clark believes that sex and drugs were forms of expression that adolescents sought in reaction to the pressures of mainstream society, a sense of context is missing from this collection, leaving them more equivocal and artistic rather than documentary. Clark did, however, include some framed newspaper articles about himself on trial as a defendant, fighting a friend who had accused him of robbery. Pointing out that the jury was asked to choose between a drug addict and a convicted criminal, Clark highlights the large amount of prejudice that exists within the legal system. A handwritten interview by Clark with a young boy comes close to making a moral statement by suggesting that the pursuit of drugs and hustling by teenagers is caused primarily from their experience of broken homes.

In the series Skaters (1996) Clark explores in more detail the effects of parental neglect upon young individuals living in New York City. Seventeen images reflect adrenaline highs and deeply jaded moments of disappointment. Young men clutch their skateboards and either stare off into the distance or look directly at the camera while wearing baggy pants and baseball caps reflecting a particular trend that makes them look more like children than growing teenagers. 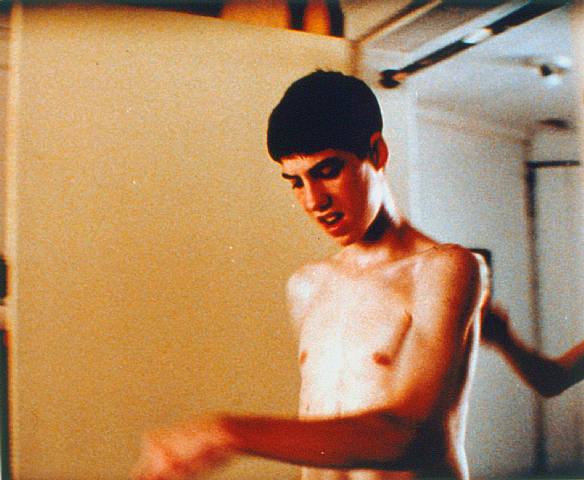 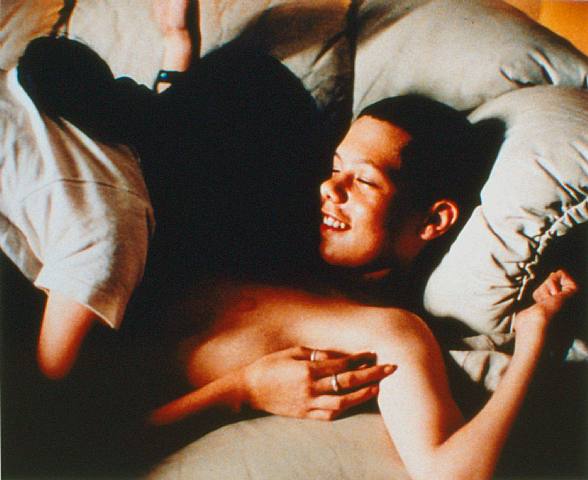 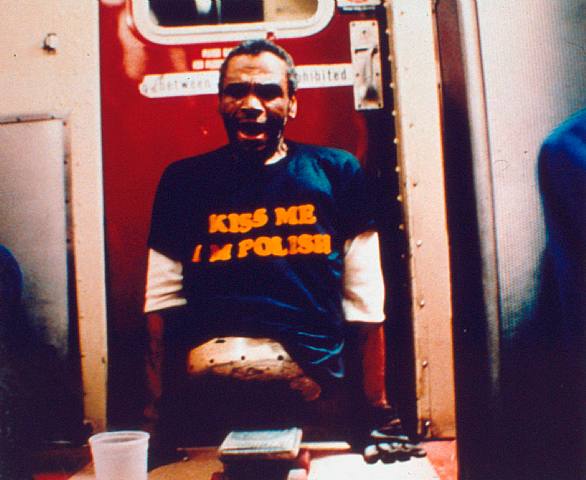 Attempting to capture the pathos experienced by this generation, Clark attaches small skateboard stickers in the margin of each photograph. One reads “White Urban Trash” while another depicts “fuc’t” with the representation of an erotic cowgirl standing above a group of armed men. Another photograph portrays two girls in gothic attire–black clothes with dark hair and heavy makeup–as a small sticker nearby offers the slang term “poot!” Additionally, the graffiti that appears on the buildings in the background of some pictures parallels the seemingly random pattern that each skater makes while cruising on flat, sloped or edgy surfaces. Depicting skateboard culture from the 1990s, these photographs capture an independence that grew from being ignored.

The exhibition veers away from strict photography in a section titled “Collages and Video” made from 1989 to 1992. Clark must have realized that the combination of mass media with his own work gave his vision more clarity. With respect to Teenage Lust the viewer is left taking for granted the photographer’s assertion that youthful unrest is caused by the oppressive nature of sanctioned authority. However, in this set of photographs, Clark is able to highlight severe contradictions within our society. Next to cute, docile pin-ups of Matt Dillon and Jack Ferguson, for example. Clark adds his own black and white images of teenagers engaging in unharnessed drug use or copulation.

What may first seem like a senseless pairing eventually becomes a clear representation of cause-and-effect. In this case, teenagers are sanctioned by society to appear sexually attractive for trade magazines, but they are not allowed to act upon the desires that such pictures arouse. Clark also featured several video clips recorded from television talk shows such as Donohue that portray adolescents describing the physical and sexual abuse they have suffered at the hands of adults. This particular paradox that was portrayed by Clark in photography also appears in four narrative films: Untitled (1994), Kids (1995), Another Day in Paradise (1998) and Bully (2001).

Clark’s photographic career began where Jack Kerouac’s adventures left off in the late 1950s, even though it is hard to gauge the cause of his subject matter within the picture alone. This show reveals that subculture offers freedom. Following in the steps of Diane Arbus, Clark sought to exonerate the marginal, in this case subversive youth culture. But unlike Arbus, who leaves herself out of each photograph in order to allow the viewer to feel a sense of equality with her subject matter, Clark inserts himself into his work, creating a jarring resonance within the pieces that were produced in the latter part of his career. Although he continues to identify with alternative teenage lifestyles, Clark’s appearance reveals the generational difference between himself and today’s youth. In the case of My Girlfriend Is 19 Years Old (2003), it is difficult not to see him as an adult voyeur who is manipulating his younger subjects. In any case, Clark’s work is shocking, passionate and quiet all at once.

JILL CONNER is an art critic based in New York City.