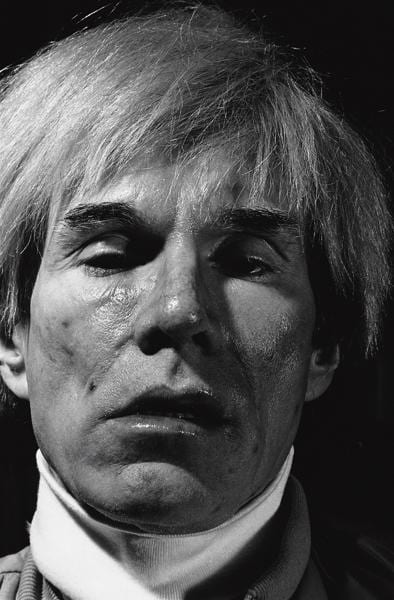 Looking at Gottfried Helnwein’ portraits, we once again experience the shock of the new, of an unprecedented view of the person opposite. I have observed many people confronted with these portraits for the first time and again and again they would show surprise, intensity of experience and fascination. Helnwein’s portraits can be seen as counterpoles to the technically sophisticated smoothness of the portraits of Robert Mapplethorpe.

“I do not refer to the choice of objects, although I mean those too; above all, I refer to that expression of uniqueness, of the special quality of time that pictures can be given by artists who know what a record is. But that requires an interest in the things themselves and it is not enough to be interested in the lighting.”

The part of him that was there was in the photograph: this remarkable statement of Richard Avedon’s may supply the clue to why, again and again, photographs are produced that suceed in surprising us by revealing something we have never seen before. There was a time, namely at its invention, when photography was celebrated because nature was, in effect, depicting itself. Human intervention had been eliminated from the process. We have since learnt that this was an enormous misjudgement of medium, even without invoking as evidence the pictorialis of the turn of the century or the Subjective Photography of the 1950s of the Set Photography of the 1980s. Whether it is landscape photography, architectural photography, photo journalism or portraiture, even the documentary variants of these genres reveal the person who was behind the camera as soon as the quality rises above the photographic view before which we seem to learn all over again how to see, to venture a new way of looking at the world. 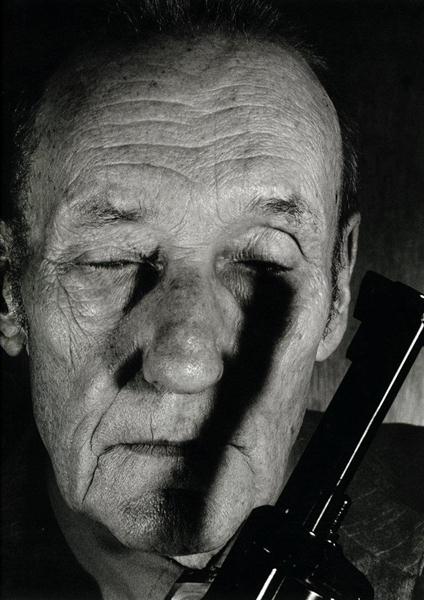 Looking at Gottfried Helnwein’s portraits, we once again experience the shock of the new, of an unprecedented view of the person opposite. I have observed many people confronted with these portraits for the first time and again and again they would show surprise, intensity of experience and fascination. Helnwein’s portraits can be seen as of the same substance as Cindy Sherman’s, she seeing hers as a visual discourse with her times through the example of her own being, or Joel Peter Witkin’s, who traces the injuries a person has experienced. In his self-portraits, bandagings and woundings Gottfried Helnwein pursues similar themes and in his Faces, too, he does not seek the surface but encounters with the individual. In this series of works we meet people we have seen untold times in photographs, yet we could be meeting them now for the first time or, at least, feel we have never seen them so close at hand.

Thus we find Andy Warhol, the self-portraying showman who had countless “last pictures” taken of him before he died, in a pose which does indeed recall a terminal stage; Arno Breker appears, with, of all things, a Joseph Beuys portrait in his hands. Carl Barks, the draughtsman who drew Donald Duck, is presented with a mischievious grin, not so different now from his own cartoon figures. William S. Burroughs faces us at gunpoint, peering from behind the pistol now menacingly watchful, now as if he were his own victim. Roland Topor peer enigmatically heavenward, eyes huge. Lech Walesa, cut at the edge of the picture to the right, has outgrown the format with his fat self-satisfying inflatedness, and Charles Bukowski’s lifeworn face is more like a landscape of craters swathed in cigarette smoke. 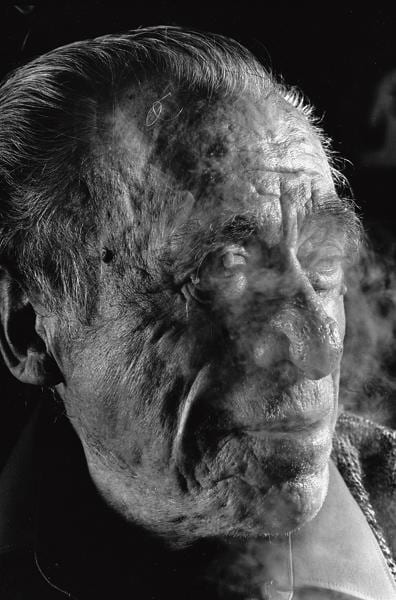 The descriptions could be continued at will; each of the faces shown reveals something of the personality it belongs to. Helnwein has succeeded in tracing in them the specific qualities of his subjects, clichés connected with their names or indeed, characteristics associated with their professions, and in making it visible there. If, vis-a-vis Keith Richard’s dramatic chiaroscuro, one already hears his guitar, or if Donald Duck’s beak can be found again in Carl Barks’ face, it becomes evident how very much Helnwein’s portraits characterise and analyse. This is Helnwein’s part that lodges in and marks the Faces. Because this element is so dominant, because the photographs so clearly evince Helnwein’s aim of letting his subjects tell of themselves, their work, the stamp this has left on them, their problems, all have left the realm of the likeness to become Helnwein pictures. Suddenly it is irrelevant whether they have been painted or photographed. Besides, one knows that he could paint them just as well in like manner.

But photography has the advantage on painting in effusing authenticity. Precisely when such expressive, dramatic photography is combined with technical perfection, when one catches onself wanting to brush Andy Warhol’s hair out of his face, when all this is tangible almost in 3-D, then expressiveness is joined by the quality of the documentary, the veracity that always adheres to photogrpahy: it creeps in by the back door and bestows authenticity. Then photography becomes exciting. For, even where it is a fiction, it is never only fiction and the old notion of “inimitable fidelity” cannot quite be shaken off; then the field of tension between “record and invention” is created anew, every time. Portrait photography especially shows this again and again. It is not only a portrayal, it is also self-portrayal. Thus it not only reproduces the image the subject has of himself, but also the image that the photographer has of him as a person and as a representative of a given social group. “In such circumstances, how could the portrayal of society be anything other than the portrayal of society portraying itself?” Gottfried Helnwein’s view of reality has always been analytical, critical and even caustic. Not without cause his art knows only enthusiasts or opponents, but no indifference. It polarises. He has approached the subjects of his Faces in the same way, including the celebrated representatives of our society, largely from the cultural sphere, form literature, art, music and film. His pictures unmask but are not voyeuristic. What he had achieved patently is to have got his sitters to disclose something of themselves.