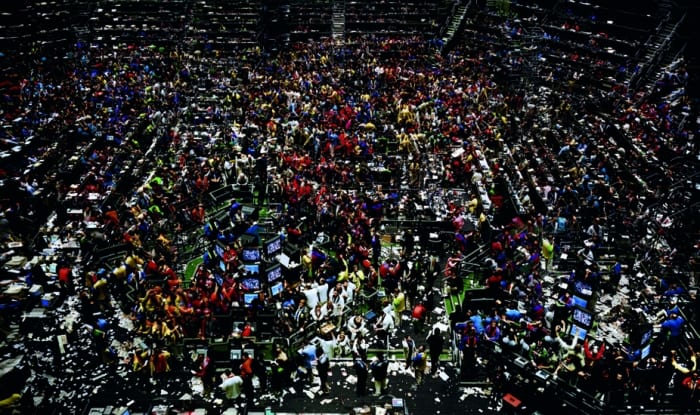 Executed in 1991, Andreas Gursky’s New York Stock Exchange is one of the earliest examples and, at the time, largest of Andreas Gursky’s seminal series of photographs of global stock exchanges which he continues to this day. The original inspiration and philosophy for the series derived from the stock market collapses of the late 1980s and their subsequent impact on the world. Here, for the first time, the world was experiencing changes in local economies impacting the larger global economy both positively and negatively and a life of excess which had built in the 1980s suddenly came tumbling down. As such the realization that the lives of those living in advanced capitalist democracies were being driven, made and broken inside these bustling rooms in the major cities of the world, made Gursky’s sophisticated images deeply profound statements of contemporary existence.

Placed alongside his similar images of revellers at a rave or clients at shopping mall, suddenly images taken from across the world were depicting the similarity of global existence in a multi-national world. As such it is somewhat interesting to note that the present work is being sold on behalf of Lehman Brothers, whose abrupt bankruptcy contributed famously to the collapse of the global economy in 2008, adding an extra layer of topicality and of profundity to this particular artwork.

In this context, this particular edition of New York Stock Exchange is a form of history painting, capturing a frozen moment of motion and activity in the American economy, the various players recalling the grand tableau of a David or a Delacroix, but as with all great artworks, its relevance becomes ever more acute as history takes its path, narratives are added to it and circumstance defines its existence. Coming at the beginning of a creative journey which has now been widely acknowledged as one of the key developments in contemporary art, the present work shows Gursky pushing the boundaries of scale and photographic presentation which he has continued to this day. Creating large scale, colour photographs of intense detail, crisp focus and extraordinarily tight grain has allowed him to take on the history of picture making and indeed painting. Taking his now signature ‘God’s eye view’, Gursky here takes a vantage point above the row upon row of computer monitors spouting endless reams of financial information and the traders themselves, carrying out their transactions. The crisp regularity of the interior’s layout defines Gursky’s composition, with the cool perfect lines and symmetry of the screens mimicking the Minimalism of Donald Judd and the sublime painterly compositions of Barnett Newman. At the same time, that abstract, almost geometrical, rigidity is undercut by the natural hustle and bustle of the people themselves, be it in the clusters of figures throughout the picture or the various bits of detritus, be it piles of paper, Styrofoam mugs, stickers or flags. However, ultimately their chaos attains a refined compositional arrangement of colour and form in a manner which recalls the rhythmic atmosphere and meditation of a Jackson Pollock action painting, in the aftermath of one of his classically intense periods of creative outpourings.

Over the years, Gursky has photographed the Hong Kong, Stock Exchange in 1994, the Chicago Board of Trade in 1997 and more recently Kuwait Stock Exchange in 2007 amongst other, creating a global library of images which in itself becomes an interesting study in similarity in our apparently diverse world. The fact that Gursky has returned to the theme of the stock exchange again and again allows him to reveal the impermanence and the state of flux that is the only constant in that shifting world. The world of finance is an abstraction to most of the inhabitants of the Earth, yet what goes on within the halls of such places as Wall Street manages to have a very real effect on the world around them, affecting everyone. These abstract patterns of behaviour and the obtuse way in which the sheets of paper that are scattered on the floor or the information that is emblazoned on the screens in New York Stock Exchange can change our own circumstances are thrown into a new light by Gursky’s exploration of this vista of scurrying human behaviour. And the absurdity of this system, the Sisyphean ups and downs, is highlighted all the more by the provenance of this picture. Looking at New York Stock Exchange, it is clear that it is not only the economy but also history itself that is cyclical: both then and now, bankers and traders have been in the press, and both then and now, American flags have been hung and ‘Support our Troops’ stickers affixed to various surfaces in tribute to troops serving in Iraq and, now, Afghanistan. Another economic downturn, another Gulf War: in New York Stock Exchange, Gursky’s detached vision of the actions of humanity is bolstered by the hindsight that has added another layer of irony and absurdity to our activities on this planet. Gursky recently discussed the abstract appearance of another of his more recent works, Bahrain I of 2005, in terms that are apt for New York Stock Exchange: ‘it’s not, and this is very important, an invention of mine, it’s an invention of reality’ (A. Gursky, quoted in N. Tousley, ‘Andreas Gursky: Interview with Insight’, Canadian Art, July 2009, reproduced at www.canadianart.ca) That balance between the abstract and the figurative allows Gursky to achieve a range of effects, much like another great German artist, Gerhard Richter. He manages to shine a light upon an element of the sublime within the contemporary landscape, hinting at some sense of overarching order or harmony within even the most hectic corners of the world. At the same time, he uses this to investigate various aspects of the human condition, of the way that we define our environment and, more importantly, our environment – even a far- distant, hidden away segment of it such as the New York Stock Exchange– can, in our global age, define us.