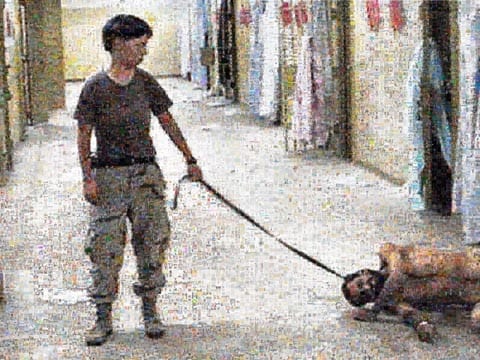 In 1988, at New York’s Museum of Modern Art, Joan Fontcuberta and Pere Formiguera mounted “Fauna,” an exhibition that included tenebrous photographs, scrupulously handwritten notes, X-rays, and the recorded shrieks of animals by a certain Dr. Peter Ameisenhaufen. The deceased German zoologist had allegedly tracked down and documented strange anomalies of Charles Darwin’s evolutionary schemes. Drawing closer to inspect things, it suddenly dawned on you, all these strange and beautiful documents, so ritualistically entombed with their dark secrets, were just a whopping pack of sophisticated lies. Back in ’88, visiting the Spaniards’ MOMA show enlisted you, with humor and theatricality, in a classic bunco play. 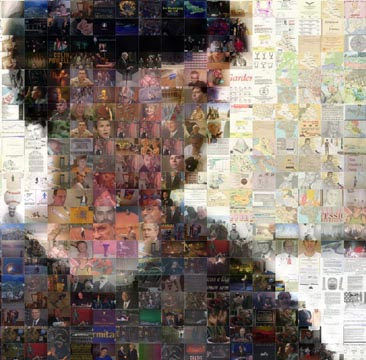 Joan Fontcuberta’s father ran an advertising agency in sunny Barcelona, where the Mediterranean night’s lost if you don’t throw back some toasty wine, plant your heel squarely on the dance floor, and squeeze in some hot sex between numbers. As a student, Fontcuberta worked in the agency’s creative department, among the chabine models, giddy graphic designers, and filmmakers questing after Carlos Saura. But Fontcuberta gave equal weight to his scholarly pursuits of sociology and semiotics at the Universidad Autónoma de Barcelona, too.

A few years later, our young photographer-philosopher-revolutionary began aggressively manipulating and cross-fertilizing all kinds of loco images, techniques, and ideas. After “Fauna,” Fontcuberta coated posters of famous paintings with emulsion, then stuck the actual stuff they depicted smack on top. (Say, in Manet’s case, blue and white lilacs.) In another series, called “Haemogram,” Fontcuberta plopped droplets of blood in his enlarger’s glass carrier, then printed out the red and textured sediments to resemble modernist abstract paintings. In “Landscapes Without Memory,” Fontcuberta highjacked military software devised for digitally translating cartographic data into 3D images. The fiendish phenom then fed his computer with the iconic and phantasmagoric imagery of Paul Cézanne, Salvador Dali, and Alfred Stieglitz. 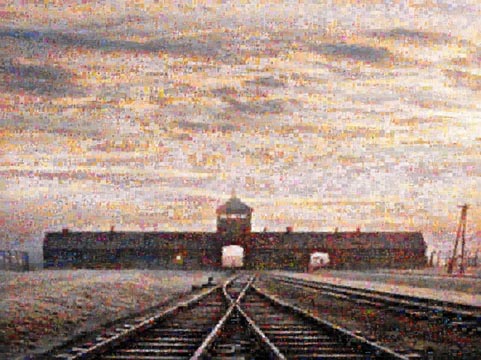 Joan Fontcuberta doesn’t leave interpretation of his work to the pious speculations and discourse of Art Market Tzars. The dude can write. “[My landscapes] constitute a sort of postmodern statement: they illustrate that the representation of nature no longer depends on the direct experience of reality, but on the interpretation of previous images, on representations that already exist. Reality does not precede our experience, but instead it results from intellectual construction.” 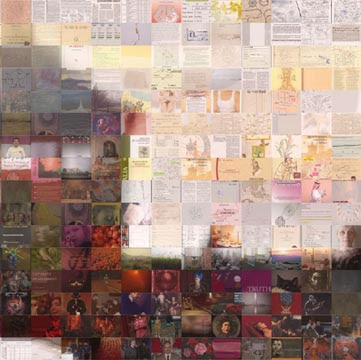 In “Googlegrams,” the Spanish witchking employs a freeware photo-mosaic program that composes big pictures from zillions of tiny pictorial tiles. All culled from the World Wide Web. Like all Fontcuberta’s work, the approach is conceptual. His creative control is an alchemy of Key Words, Chromatic Values, Search Engines, and Secret Algorithmic Codes. For instance, when you first take in the mural-sized Googlegram, “Greenpeace,” you see some sweet guy in his rubber raft sliding along the water with a friendly marine mammal. Stepping closer, the dénouemant comes down hard. You been played, cuz. Quiero decir, totalmente. Mira. The pictorial tiles are the search results of members of the European Chemical Industry Council. “9/11” will truly make the meat behind your eyeballs ache. The heartbreak image of the second plane crashing into the World Trade Centre represents the virtual machinations of three word commands. “God,” “Yahve,” and “Allah.” The malignant cells of the chromogenic mural seep through its body like cancer. 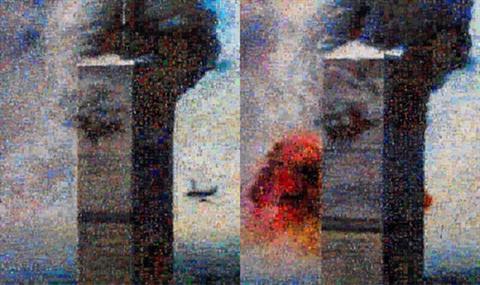 “We like to think of the Internet as a vast, open, democratic structure,” writes Joan Fontcuberta, “but the channels of access to information are still mediated by political or corporate interests. The blocking of data, secrecy and censorship are technologically feasible options that the search engines exercise, freely or under compulsion, without informing the user.” Just like Robert Heinecken wanted to comprehend photography, rather than use it, Joan Fontcuberta is a revolutionary who reminds us how, not just photography, but just about every blessed, sanctified, and funnel-fed piece of info flickering across your groovy Apple display, too, is chock full of duplicity and subterfuge. This is no Middle-Earth, the Towers guarding Gondor are dust and rubble, but for stone sure life’s no Utopian Noosphere of Connectivity either. It’s infiltrated with Tricksters, Arch-criminals, and Pimp-daddies from the Virtual Dark Land. With a face slap that turns your eyebrows into exclamation points of alarm, the Spanish artist rids you from any unthinking and uncritical belief that the entertaining shit you enjoy seeing and reading has any relationship with Truth. Then, Joan Fontcuberta wakes you up, by gently rubbing sandpaper over your eyes.

(© Robert Goethals and Forward Thinking Museum. All rights reserved. All images © copyright the photographer and/or publisher)