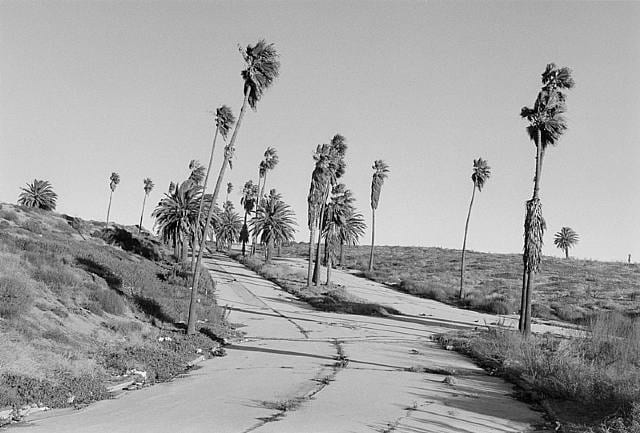 Palm trees, baking sunshine and the beckoning call of Vista Del Mar (1995). The Hollywood glitz is gone, the water has dried up and the baking cracks of a barren road call out to the viewer that hope and dreams are just a mirage. The blazing sun is here to show you that only figments of promise remain… nothing but that which was wishing to become.

In this strange and barren view, Henry Wessel at once describes Southern California’s sunshine and palm treed landscape and taps into that broken dreams that everyone knows also dominate. The cracks in the road and the encroaching weeds in the gutters are there to “tell you” of the plans that were being made and then went to hell. Everything has dried up to cry empty tears and the land is slowly working to repair the scar that has been carved right on to its back. The land is forlorn and melancholy, it wilts sideways as if it was trying and then it decided to give up.

Wessel’s vantage point and the framing are important. Several variations of this image could have been made with less impact. A few steps to his left or his right and the “language” could start to diminish or change. The “offset” nature of the composition and sideways flow of the scene contribute to the “mood” that is contained. These complexities speak at once to the viewer, an analysis on auto-pilot for them, from within. Immediate implications are put forth for us to receive. Although the implications will vary for the viewer, they based on reality and a shared existence that speaks to the universal and to what it is to be these things. The tapping into and the “speaking” of the language are the picture’s success. Composition can be partially defined by its ability to pull out this language. To succeed it is necessary to describe, with weight, the message and to force out, with mystery, the questions. This tapping into can happen by accident or it can be done with calculation but regardless of the method, it must occur. Without the access to a complex underlying language a photograph ambles rather than pounds. Without the pounding, it fails and falls flat.

Henry Wessel’s “California” is a feeling. It is reflective of and symbolic of a dream. It is communicative with immediacy to the viewer that is “understood”. The work is filled with subtleties and obvious characteristics to “describe” what is contained. Although Wessel was part of the “New Topographics” exhibit and sharing an association with that work, Wessel is in a rather unique place on his own. Vista Del Mar is just a little tip in an iceberg sized body of work that captures a “feeling” as much as it does a place. “California”, the USA and its mythology will be manipulated and put forth for centuries to come. Wessel shows in this photograph just how weighty a landscape and its “feeling” can be done.