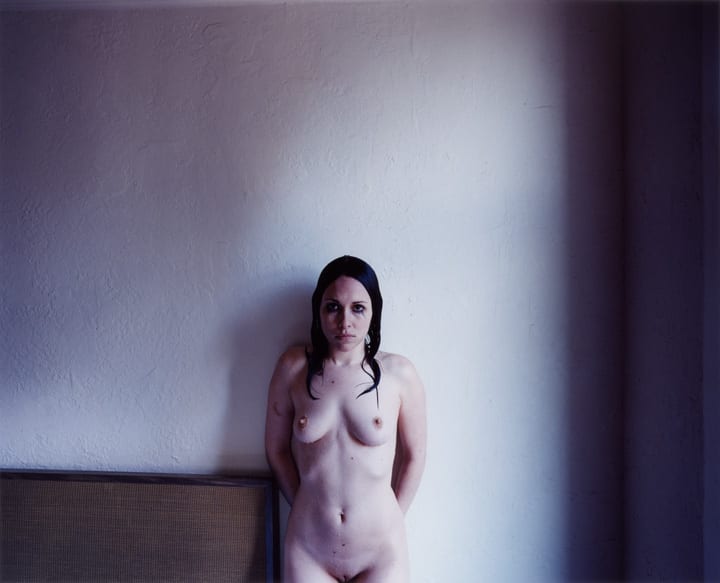 I once heard someone remark that the desire to have a perfect lawn was not unlike the desire to have a piece of perfect sculpture for a body – the lengths to which a person goes to achieve such perfection reveal a great deal. And so the coiffed and manicured American lawn that is a hallmark of the suburbs with perfect green grass came to resemble America’s plastic bodies, transformed by technology and money from flesh and blood into repositories of silicon in the hopes that perhaps, since timelessness is as impossible as death is unavoidable, perhaps instead we can achieve the perfection of Michelangelo or Venus temporarily, helped along by a little silicone.

Fertilizer is to the suburban lawn what cosmetics are to the suburban face: a fickle attempt to sweep ugliness under the rug with a splash of color. The breasts are bigger and the grass is greener, and beneath this gesture lies the mark of a desperate attempt to believe that control over external appearances alone will keep our interiors safe. 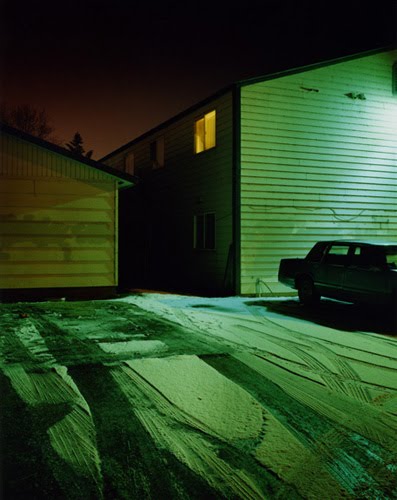 So sneaking by night to the corner of a lawn and capturing the suburban world off guard, with its appearance and intended colors warped by night, is like waking up next to a prostitute as the late morning light streams in through the window: not exactly what you thought you were getting yourself into.

Todd Hido’s Fragmented Narratives appears to be the work of an actor who, disgusted with the profession, has wiped off the mask of the suburbs and is now (as Walter Benjamin might put it) “setting about to remove all makeup from reality too.”

Are Hido’s pictures just the literary refinement of the motifs that Atget discovered? Or does it take a new and true vision – a man like Hido – to rediscover them in that suburban idiom that is so unique to the United States?

The question seems beside the point, since Hido has moved on – or perhaps come full circle. He has moved from taking suburban portraits where only the stain remains with all evidence of anything actually living removed to take pictures of women. 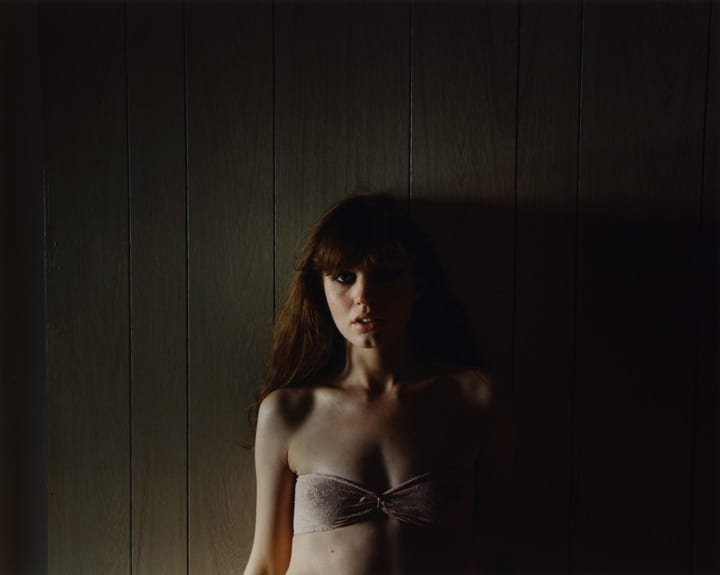 Perhaps Hido’s masterful gesture is to preserve the flickering American ambiguity as to whether we disdain or admire the suburbs.

As a gesture, perhaps this effort to hide emptiness with orderliness and to use the exaggerated components of the beautiful and the pure belies the ugliness that we associate with homogeneity. Perhaps Hido’s masterful gesture is to preserve the flickering American ambiguity as to whether we disdain or admire the suburbs.

Todd Hido is a renowned chronicler of America’s hollow parts. By night he has slouched through darkness towards exurban tract homes or misty-quiet dead-ends in a suburb.

There on the edge, at the frayed interior fringe of US civilization, he turns his camera on the kind of seaminess that makes David Lynch smile and the rest of us squirm. He opens the camera’s shutter for several minutes and occasionally lights up a cigarette while the desolate isolation and deep insecurities of the single family homeleak through towards permanence on film. 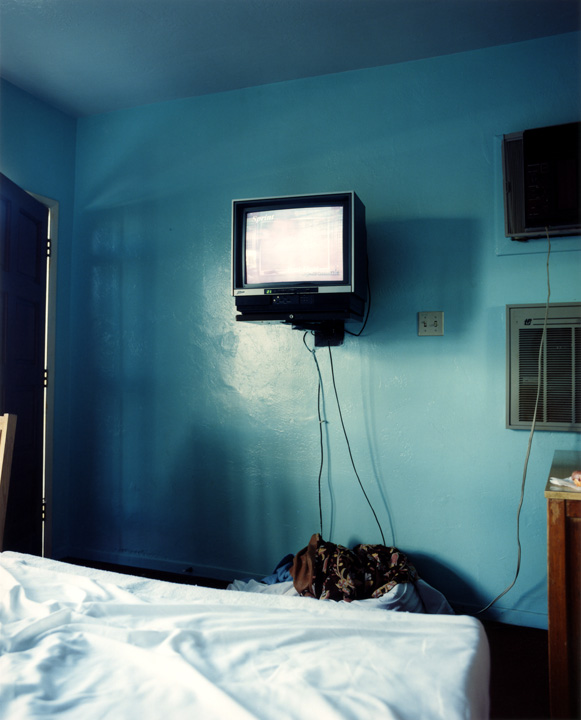 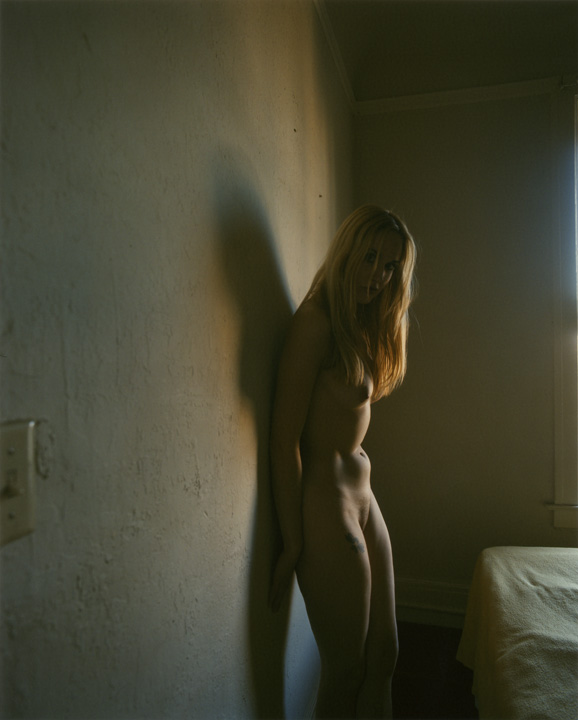 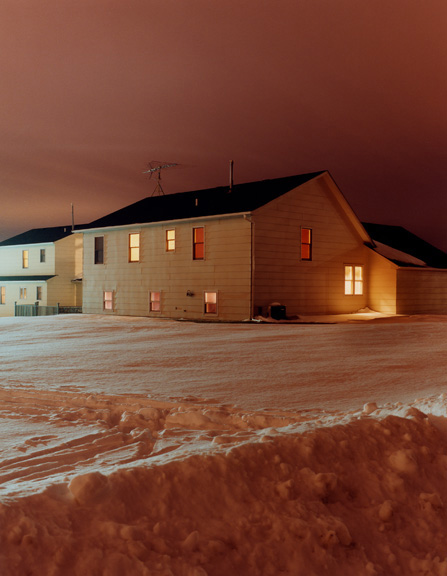 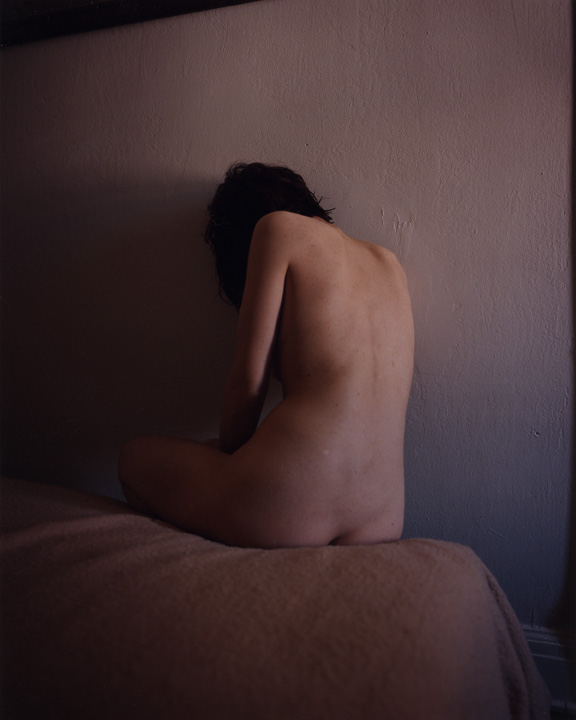 Women. Mostly young, mostly thin, mostly naked. Mostly perched on the edges of ruffled motel beds with expressionless looks painted on their faces. All of them lit by a similar light-source: natural light streaming in sidelong through an unobstructed window. Sometimes the window is visible; sometimes it falls beyond the purview of this excised and timeless moment in time. Even in those few where you can see the window, the light streaming through it is too bright, suggesting perhaps that the world outside, in all its afternoon complexity, is simply too much, too far beyond this relationship here, between a man out of sight and a naked woman perched on the edge of a cheap motel bed.

All of this is the dull luminescence of a fictive interior. These hollow husks of women, frozen in a confrontation with one side of a mirror they cannot see beyond, are beautiful. But that beauty is tinged with something melancholic and temporal. They are caught in moments of what should be a kind of exposure. It feels as though something is being revealed.

Ian Epstein is a freelance writer and photographer. He has worked for The Nation, n+1, The Daily Beast, Hyperallergic, Newcity, and other publications. Tumblr. Twitter.

EXPLORE ALL TODD HIDO ON ASX

(© Ian Epstein, 2011. All rights reserved. All images © copyright the photographer and/or publisher)