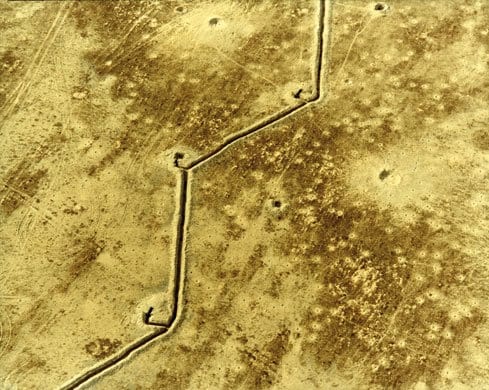 Sophie Ristelhueber’s best known work of art is a small book. The title of the book, and of the photographic installation of the same material, is as ambiguous as it is simple. “Fact” seems straightforward, but to what fact does the artist refer? The “fact” of the Persian Gulf War? One would think so, given the fact that each of the 71 photographs that make up the work was shot in, or above the desert of Kuwait. But why only images of the desert? If the “fact” in question is the fact of that war, why not destroyed property, sacrificed innocents, wasted resources? Neither a diplomat nor a general in sight, Fait is mostly a long catalogue of weirdly parted sands.

Given their prevalence here, not to mention the context of Ristelhueber’s corpus, Fait refers to the brief and telling factuality of perishable marks in the desert. The dumb fact of the wilful mark, the elusive ur-sign of art and language, is the point of departure for most of her work. But ambiguity, another hallmark of this artist’s approach, runs too deep in Fait for us to easily find a clear point in it, beginning with the double-entendre of its title. Fait is French for “fact,” as in ‘undeniable.’ Somewhat redundantly it also means ‘done,’ pushing the fact into the past, as in ‘mission accomplished.’ Fait is above all a work of art, the product of a widely exhibited artist who is no stranger to museums and galleries. It is also a fascinating military document, a hybrid journalism of the rarest sort whose factual interest mirrors its aesthetic grace in perfect equilibrium. We may not have another series of pictures that both judiciously and elegantly record the physical marks on the ground that war leaves, coldly abstracted from the anecdote of its casualties. A document of a modern war that traced itself in the sand, Fait records the event as if it happened on a sheet of paper; we leaf through it in a book of geometric patterns presented in photography’s warmest metallic tones, interspersed with sobering close-ups that constantly pull us back from abstraction and down to earth in Kuwait, 1991. 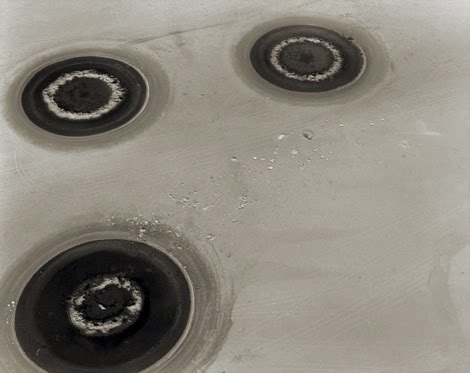 Sophie Ristelhueber has made an important contribution to the art of the book or, I should say, art conceived as a book. The dozen books that she has so far created have mostly been small, the ideal size for travellers’ field guides. Like Werner’s Nomenclature of Colour, which Darwin carried with him to the Galapagos Islands, her books suggest convenience for wandering naturalists, people like the artist herself who are seeking details of the world, (the title of her Boston Museum of Fine Arts monograph, another of her book projects). Not all her books include images of upheaval, or images at all for that matter, but many do. In Beirut, Photographs (1984), she immortalised the ruins of a modern city that echo those of its ancient suburbs. She then followed up with Vulaines (1989), a photographic poem to her family’s Ile-de-France country house where she recorded the wear of leisure on furniture presented like so many barricades to a small child. Ristelhueber travelled to Kuwait in 1991 to produce Fait and then to Bosnia in 1993. Every One (1994), a work she produced the next year, was her notorious first attempt to make art from the Yugoslavian civil war. Her second attempt, a moving and innovative art installation entitled La Campagne (1997), did not result in a book. In fact, Ristelhueber’s gallery-based work is at least as prevalent as her artist books. Most recently, she has contributed three books in rapid succession to her list, WB (2005) which includes 54 photographs of the West Bank countryside, each showing a damaged road; Eleven Blowups (2006), a series of digitally-edited photographs of bomb craters on Iraqi thoroughfares inspired by the car-bomb assassination of Lebanese Prime Minister Rafik Hariri; and Operations (2007), a non-photographic, conceptual gazetteer that lists, in the syncopated manner of a concrete poem, the names of famous modern military operations such as “Desert Storm.” 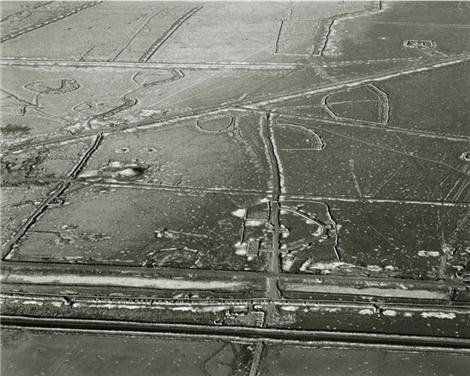 For their part, her sophisticated art installations are large and bold, often successfully employing unorthodox supports like interior walls thinly papered with pictures of the outdoors (La Liste, 2000); the clichés of diplomacy stencilled on refugee tents (Resolutions, 1995); or intimate scars at the scale of official state portraits (Every One, 1994). Her installation of Fait is dependent upon the given setting, sometimes shown across a long wall or in a square room hung three or four high, depending on which arrangement will allow the exhibition of all or nearly all 71 of the 39 x 51 inch prints that constitute the work. She has also shown smaller selections from the series, such as at New York’s Museum of Modern Art in 1996. Like the “porcelain room” of a European palace, Fait is meant to surround and overwhelm the viewer with a mass of enigmatic detail. A dizzying array of flat images arranged in a way that fractures our point of view, it might cause a kind of artificially induced vertigo akin to the Stendhal Syndrome: a mal-de-mer view of a war-riven desert.

In both the book, and the installation of the same name, each unidentified image succeeds another in no discernible order except for this tendency to wildly vary the point of view. The mental choreography of constant reorientation is demanding of the viewer; we must continually resituate ourselves as each successive image changes our perspective in relation to the scene (from the ground, from the air, from a lateral distance, close-up, etc). Occasionally, an image appears that is not ambiguous, such as of cheap wool blankets that Iraqi soldiers abandoned in their trenches. These blankets have the intensely sentimental fascination of Van Gogh’s famous shoes. And there is indeed a pair of shoes in Fait, vitrified and barely distinguishable from the ocean of sand that surrounds us in these pictures. Here, bulldozed ponds of crude that retreating Iraqi troops were unable to ignite; there, an erratic convoy of military vehicles charred to a bright red rust. The list of details also includes half-blasted bunkers, acres of spent material and miles and miles of trenches. Burning oil derricks appear on the infrequent horizon. 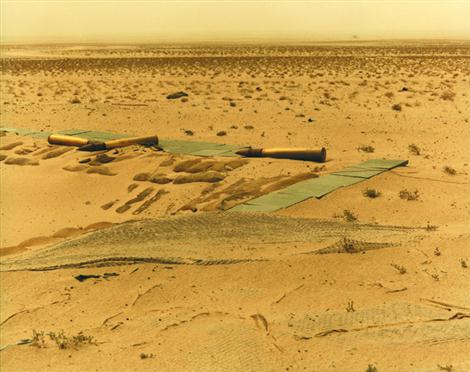 One of the more intriguing aspects of this work is the variety of bomb craters the artist has collected. Even military personnel would have difficulty identifying some of the various weapons used to make these strange sores in the landscape, and whether they came from an army, a navy, or an air force. The many craters and pocked sands quickly identify this as a theatre of war, even to an untrained eye. For me, however, the arcane trench patterns are the most fascinating. Their geometric strangeness bear witness to a futile and antiquarian concern for ground strategy in a ridiculously lopsided war, much of it waged from the air.

Despite its deliberate ambiguity, as cold and efficiently Cartesian documents go, Fait satisfies our eternal need for evidence, for facts. It was photographed, therefore it is. The work could well serve as a partial final report on a six month war that – unbeknownst to the artist at the time of its creation eight months after the official ceasefire – would have a notorious sequel, still claiming lives as I write, improbably declared by the son of the earlier American Commander-in-Chief. Indeed, for most viewers, Fait’s importance as a historical document, given the fresh significance of its subject, has unfairly overwhelmed the artistic merits of a work that goes well beyond mere documentation to test perception and undermine point-of-view; a work that raises the ethical dilemma of aestheticised violence; that seeks the outer frontiers of poetic license and of artistic freedom; indeed, a work of art that rearticulates the very role of art in our society. Can it transform information into knowledge? Can it help us to feel the facts, especially those to which other forms of transmission like journalism and political rhetoric have inured us? And if these accomplishments are in fact real, are they still just more collateral effects of an essentially formalist sensibility exploiting current events in search of new beauty? Fait offers no more comfort as art than it does as evidence… (continued)