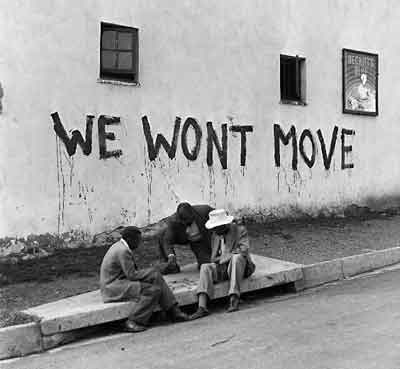 Mr. Chancellor,
I have the honour to present to you Dr Peter Magubane for the award of the degree of Doctor of Laws, honoris causa.

The distinguished novelist Joseph Conrad wrote in a famous preface:

“My task which I am trying to achieve is….to make you hear, to make you feel – it is, before all, to make you see. That – and no more, and it is everything. If I succeed, you shall find there according to your deserts: encouragement, consolation, fear, charm – all you demand – and, perhaps also that glimpse of truth for which you have forgotten to ask.”

Conrad was talking about the power of the written word. The photojournalist, however, must work largely without words, must train his eye, sharpen his skills and refine his technique, so as to find the one defining image that gives the essence of an event or human story – to remind us over and over again that one picture is truly worth thousands of words. 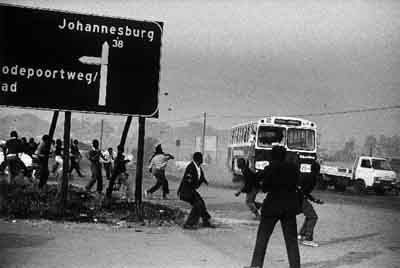 The point is, of course, as Conrad shows, that we are not dealing merely with a record: the appropriate image always has an ethical dimension to it. Like the prophets of old, the photojournalist today says “Behold and see” – and like those prophets, too, what we are asked to behold is so often the story of human oppression, degradation, or woe.

Certainly for a photojournalist born in Vrededorp, South Africa, in 1932, Peter Magubane has had more than his share of the oppression, degradation and woe which South Africa, prior to 1994 seems deliberately to have doled out to most of her sons and daughters.

Beginning his professional career on Drum magazine in 1954, where an early assignment was to cover the Sharpeville massacres. After 9 years on Drum, Peter Magubane freelanced for 3 years (1963 – 1966), before landing a job at the Rand Daily Mail in 1967. Shortly thereafter, Magubane began to feel the full might of the apartheid government’s oppression of those who bore witness to what was really happening in our land. Between 1969 and 1971, Magubane was detained and kept in solitary confinement for a total of 586 days. He was made to stand for 5 days and 5 nights on bricks of which the middle one was unstable. Given only unsweetened black coffee to drink, he collapsed on the fifth day.

Worse was to follow: in 1970, Magubane was banned from public life and from following his photo journalist career for 5 years, and forced to resign from the Rand Daily Mail. He resisted – one is tempted to say “of course” – and in 1972 he served 6 months in prison for breaking a banning order. In October 1975, when the banning order expired, Magubane resumed employment with the Rand Daily Mail. 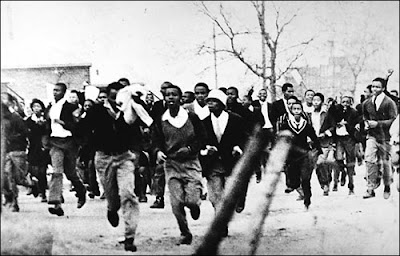 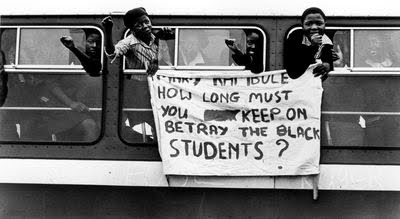 Though the apartheid security juggernaut was unaware of the irony of it, Magubane’s resumption of his career came only months before the watershed student uprising of 16th June 1976, and his time as a banned person had but served to sharpen and refine his opposition to everything the apartheid regime represented.

His coverage of the 1976 uprising as a photographer for the Rand Daily Mail was carried out under conditions that would have broken and defeated a lesser person. During the course of the uprising, he was assaulted by police on many occasions; subsequently his nose broken by a police club, Magubane was then hospitalized for 5 days. Amidst all this, he never forgot his professional calling, the importance of the camera as witness. One day, while photographing the police’s brutal attack on a demonstration, he was ordered by the demonstrators to stop taking pictures. Magubane argued that photojournalists should have free access. “A struggle without being recorded is no struggle,” he argued. “Whether you win or lose, a struggle without documentation is not a struggle.” As a result of Magubane’s stance, photographers – including white photographers – were accepted by resistance groupings, and this legacy endured throughout the violent 1980’s and early 1990s and doubtless preserved the safety of many contemporary photojournalists.

In August of 1976, Magubane – along with other black newsmen – was again detained for 123 days, and his house was burnt down.

From 1978 – 1998, Magubane worked as a photographer for Time Magazine. He also freelanced for UNICEF and the UN High Commissioner for Refugees.

For many years, he was the only black South African photographer who could enter and document other African countries, such as Ethiopia, Mozambique, Somalia, Zambia and Zimbabwe.

The lens of both the camera and the eye is circular – an image for inclusiveness, for seeing all sides. One of the most admirable and remarkable aspects of Peter Magubane’s work is its balance. Despite all he suffered, Magubane taught himself not to hate, because – as he told Rhodes journalism students in 2001 – “I would not be able to do justice to my work. In my detention, I said I was not the only one. There were people worse off than me, in terms of detention and torture.” Consequently, Magubane’s lens recorded not only the police brutality of the apartheid years, but the internecine “township wars” which accompanied the demise of apartheid: the brutality of kangaroo courts, the deadly rampages of hostel-residents and incensed crowds. In another reflection on his work, Magubane said: “All this time, we accused whites of exploiting child labour, but there is also this in the townships. For every finger pointing forward, there are four pointing back at you.” 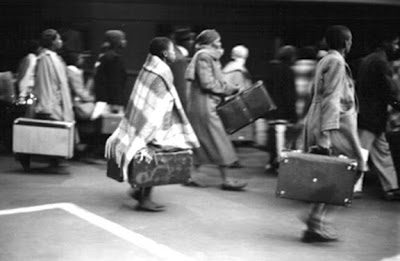 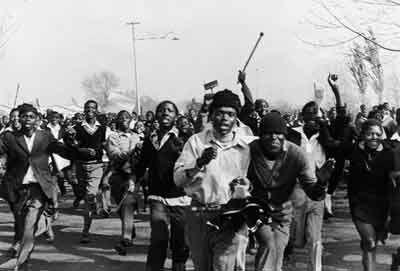 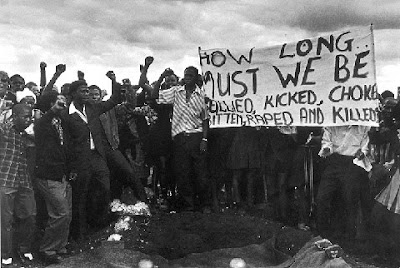 Nor has violence – from whatever source – been his only subject: there are also pictures of weddings and children at play, and images of hope such as that of Nelson Mandela at the ballot box in 1994. In more recent years, the Magubane lens has portrayed South Africa in all its cultural varieties – from rural Afrikanerdom to African circumcision ceremonies.

There is nothing provincial, however, about Peter Magubane’s stature or reputation. From 1964 onwards, when he held two solo exhibitions in London and Cologne, Magubane has been an international presence, and internationally recognized. In 1979 and 1980 there were two solo exhibitions in New York, followed by, in the latter year, one each in East Berlin and London. In 1981 his studies of Ndebele Culture were exhibited in Stockholm, with two more solos in New York – and so it goes on: Wetzlar, Germany; New York, Sweden, New York, Amsterdam, Cardiff; the Netherlands, Munich, Berlin, Frankfurt, Hamburg, Bonn, Paris, Portugal, New Orleans, Moscow, Dar-es–Salaam, Scotland, Mexico. Many airlines cover less territory than Magubane’s solo exhibitions!

Nor has he neglected his own country, with no less than 26 exhibitions to his credit here. He has worked on films, lectured internationally, published books and articles. Starting from 1957, he has received no less than 27 awards for “best picture”, “professional photographer”, distinguished / enterprising journalism”. Highlights amongst these include a Coretta Scott King Award and a Martin Luther King Award, the Order for Meritorious Service Class II awarded in 1999 by former President Nelson Mandela, an Honorary Doctorate from UNISA in 2003, and a “Lifetime Achievement Award” from National Geographic in 2005.

Amidst all this recognition and all this acknowledgment of an outstanding talent, Peter Magubane has never been allowed to forget the cost of following his chosen profession. In 1985, while covering a student’s funeral in Natalspruit, Magubane was shot 17 times below the waist. Some of that buckshot remains in his body to this day. Again in 1986, he intervened in a violent and highly volatile incident in Leandra, saving the lives of a mother and daughter whose son and brother had been chopped to pieces by an angry mob outside their house, because he had killed the leader of the group who had been buried that day.

But this is the man who has taught himself not to hate because – as he told Rhodes journalism students in a lecture in 2001 – “I would not be able to do justice to my work.” He concluded his lecture by saying. “I have done my country proud, and I have done photography proud. Those with cameras should be documenting our country, so that we can see in 40 years’ time what life was like now. We should work together to better our country through photography….”

Dr Peter Magubane has given generously of his time to students at Rhodes University. A person of his calibre is clearly worthy of recognition by a university which prides itself on its offerings in journalism and media studies, but at this time, when we are officially opening the splendid new facilities built for that department, it is especially appropriate that we recognize a photojournalist of Dr Magubane’s stature and thus signal to society at large that Rhodes University recognizes the key role of photojournalism in public life and visual memory.

I have the honour, sir, to ask you to confer on Dr Peter Magubane, the degree of Doctor of Laws, honoris causa.

(© Paul Walters. All rights reserved. All images © copyright the photographer and/or publisher)