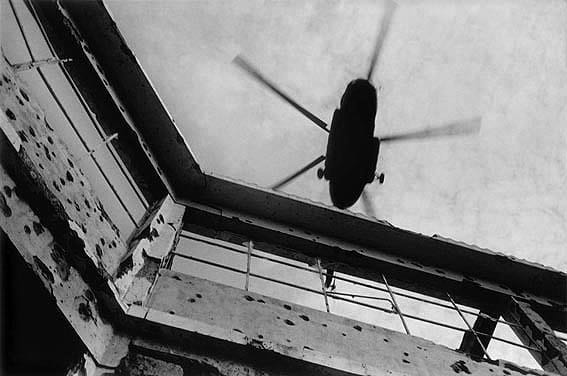 Enough seen. The vision was encountered under all skies.
Enough had. Noises of cities, in the evening, and in the sun- shine, and always.
Enough known. The pauses of life – O Sounds and Visions!
Departure into new affection and new noise!

My journeys have been idiosyncratic, often purposeless, not so much to commit journalism as to travel for its own sake. Perhaps the more successful images reflect this; perhaps a pattern can be discerned from their parts. I can describe moments, or trace a journey, by the images I am left with. They themselves form a thread. How I came to be in a certain place seems banal, often forgotten.

In 1997 I was in Korneliuskondre, a village on a tributary of the Coppename river in the former Dutch colony of Suriname. My friend and I had spent some time in the forest, and we were on the way to a border town, from where we would cross into Guyana. We were invited to the village by someone we¹d met further up the river, and that night he offered us a thatched shelter, that had beams from which to hang our hammocks. 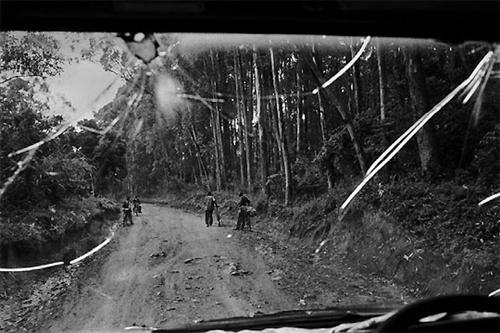 The main road linking Goma and Bunia, running the length of east Democratic Republic of Congo, 2003 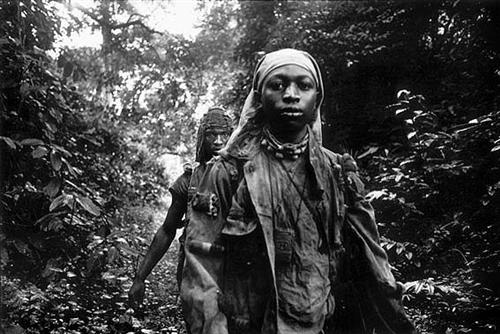 “My brand of idealism that had its roots in the time I started photographing in South Africa during the apartheid years of the 1980s has dimmed. There was right and wrong, it seemed clear to me which side I stood.”

In the morning I walked into a small church and found children playing there. I was impressed by the simplicity of the building: the polished concrete floor, the sparse altar, and the crucifix hanging above it. I started to take photographs, trying to include the boys in the scene without alarming them, or making them self-conscious. Then, as if we had entered into a silent conspiracy, as if he understood entirely what I wanted, one of the boys moved behind the altar, leaned his head on it, and raised up his schoolbook. On it was a photo of Johan Cryff, a famous Dutch soccer player.

In Guyana, I photographed a dog in the middle of the road. The image made me begin to think of a collection of images ­ a sort of diary in retrospect. I was struck by its seemingly arbitrary and loose composition, and distant subjects. It was an ordinary scene ­ two cars passing on a road, but the dog caught in the traffic (he escaped) created the worthy moment. The fire on the horizon and the piece of white added an undefined menace. The image is a thing of beauty to my mind, has stayed with me for years, it always will. But the scene itself, in reality, was not. It was an instant in an uncomfortable journey, unmemorable except for this scene, which, if I had not captured it on film, would too have passed into oblivion. 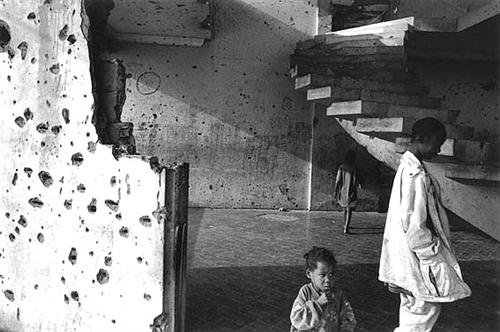 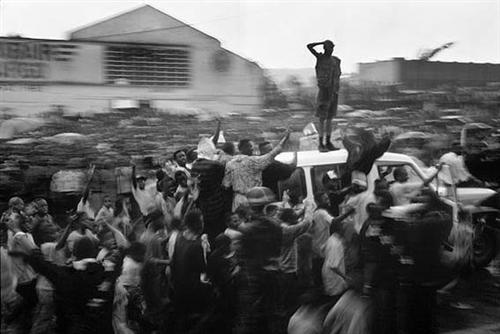 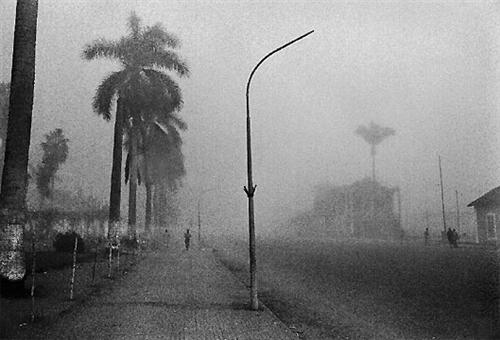 These moments are elusive, alluring for being so. My brand of idealism that had its roots in the time I started photographing in South Africa during the apartheid years of the 1980s has dimmed. There was right and wrong, it seemed clear to me which side I stood. One would forego, what I might now call subtlety, for the sake of making a statement about injustice. The world’s press set the tone and timbre of the reportage it would receive, and I for one was bought by it. Perhaps that is why I now look for ways to glimpse other worlds which I attempt to enter for a while. But one cannot live them all, and usually I am left with a keen sense of my own dislocation.

Of course, there is always this: to change what is ugly and brutal into something sublime and redemptive. So I have photographs I like for reasons I have come to distrust.

I learned my trade as a photojournalist but feelings of impotence in the face of others¹ despair led me to look away, as if catching only obliquely their reflected light. These are photographs of disparate locations, but their justification for ending up in one collection, their basis for comparison, is of another nature: disquiet, introspection, wonder.”

(© Peter Galassi. All rights reserved. All images © copyright the photographer and/or publisher)