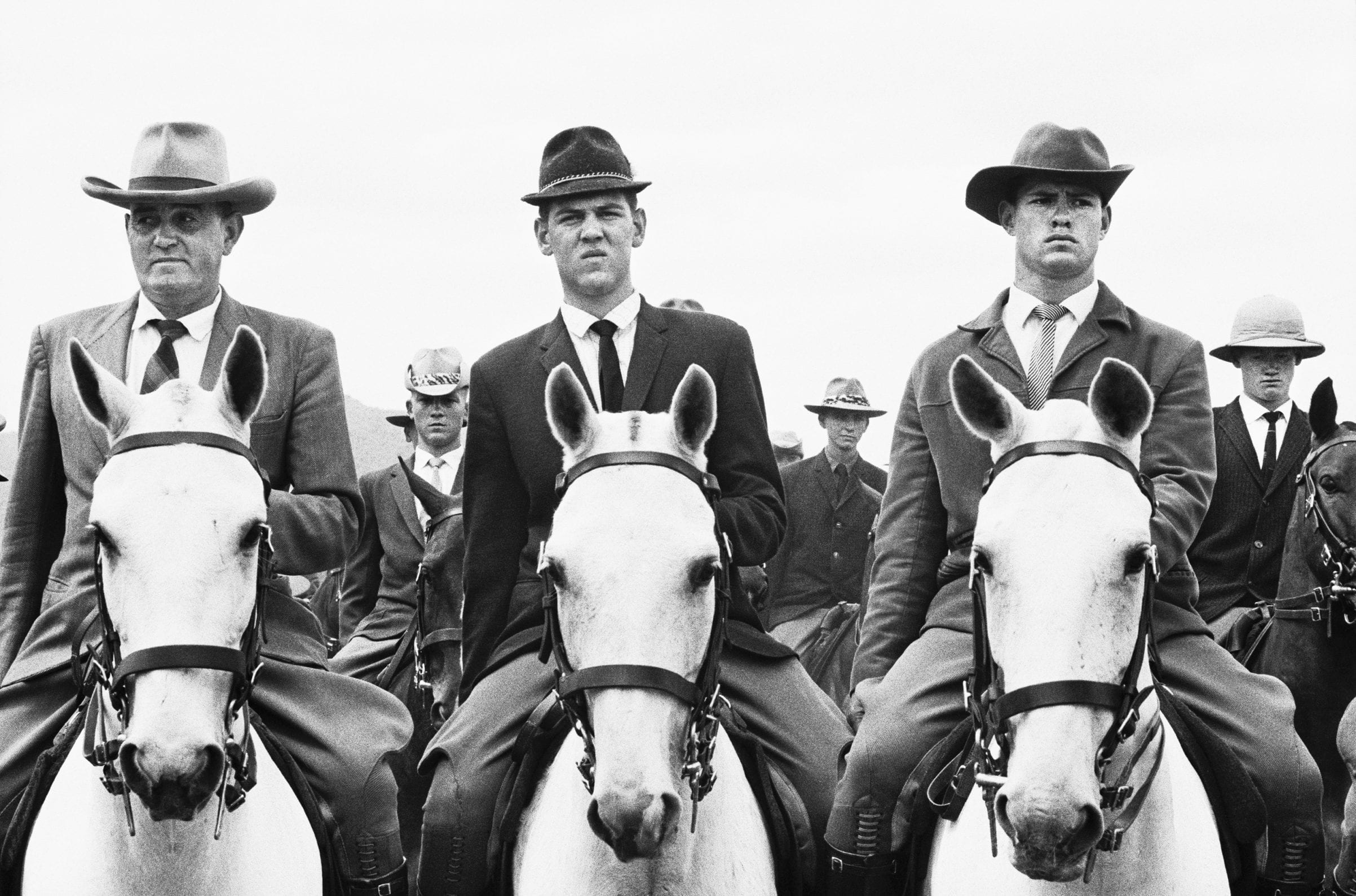 “The ideology and apparatus of apartheid and the overwhelming power of the state to crush opposition became ever more present in our lives.”

I was born and grew up in Randfontein, a gold-mining town 40 kilometres west of Johannesburg. My family were middle-class Jewish people and my earliest experiences of social interaction were partly in the Jewish community, partly in the wider town.

I can’t say exactly how old I was, but it was at an early age that I first experienced anti-Semitism. I found it incomprehensible. Why would people – Afrikaans-speaking boys my own age – feel a need to express anger or disgust towards me, a slightly-built kid who had done nothing to them?

At school, Afrikaans was a compulsory subject that I disliked intensely; it was a harsh language, like the people who spoke it. It is ironic that my mother sent me to Krugersdorp High only after I experienced serious incidents of anti-Semitism and even sadism, first at Pretoria Boys High and then at Marist Brothers in Johannesburg, both English-medium schools. I was happy at Krugersdorp High, also an English-medium school. I finished high school in 1948, the same year the National Party came into power. I remember on their election poster outside my father’s shop in the main street of Randfontein a caricatured Hoggenheimer, the archetypal Jewish capitalist. Besides the swart gevaar, Jewish capitalists were the ultimate evil in the eyes of the party.

Lily and I married in 1955 and we agreed that South Africa was no place to bring up children. The ideology and apparatus of apartheid and the overwhelming power of the state to crush opposition became ever more present in our lives; the National Party appeared invincible and it seemed ever less likely that we could put down roots here. All the time there was this sense of impermanence, the need to think actively of getting out of South Africa. I had flirted briefly with Zionism but I was never a very convinced Zionist. My father regarded nationalism, including Zionism, as an evil and although he never attempted to convince me of his views, his logic, here, was inescapable.

In my father’s shop, serving Afrikaners, I found, almost in spite of myself, that I liked many of them and, to my surprise, that I was beginning to enjoy the language. There was a warm straightforwardness and an earthiness in many of these people that was richly and idiomatically expressed in their speech. And, although I have never advanced beyond being able to speak a sort of kombuistaal, I delighted in our conversations. Yet, withal, I was very aware that not only were most of these people Nationalists, strong supporters of the Party and its policies, but that many were racist in their very blood. Although anti-Semitism was now seldom overt, they made no secret of their attitude to blacks, who at best were children in need of guidance and correction, at worst sub-human. I was much troubled by the contradictory feelings of liking, revulsion and fear that these Afrikaner encounters aroused in me and felt the need somehow to come closer to these lives and to probe their meaning for me. I wanted to do this with the camera.

I had begun to use the camera long before this in a socially conscious way. And so I began to explore working-class Afrikaner life in our district. I drove out to the kleinhoewes around the town. I would stop and ask people if I might do some portraits of them or spend time with them while they went about whatever they were doing. In this way I became intimate with some of the qualities of everyday Afrikaner life in these places, and with some of its deeply embedded contradictions.

A pensioner with the child of a servant, Wheatlands Plots, Randfontein, Transvaal (Gauteng), September 1962.

“I had begun to use the camera long before this in a socially conscious way. And so I began to explore working-class Afrikaner life in our district.”

An old man sits for me. A black child comes and stands next to him, looking at me with curiosity. The man turns and says to the child, ‘Ja, wat maak jy hier, jou swart vuilgoed?’ (Yes, what are you doing here, you black rubbish?), the insult meant and yet said with affection. How is this possible? I don’t know. But the contradiction was eloquent of much that I found in the relationship between rural and working-class Afrikaners and blacks: an often comfortable, affectionate, even physical intimacy seldom seen in the ‘liberal’ circles in which I moved, and yet, simultaneously, a deep contempt and fear of blacks.

It was in the late 1950s that I first read Herman Charles Bosman’s Mafeking Road. Besides giving me much delight, the stories strongly influenced my photography. Unaffected in language, economic of means, deceptively simple in plot, they conveyed in near poetry, with humour, irony and profound understanding, what must surely have been the truth and particularity of Boer life in the Marico Bushveld in the late 19th and early 20th centuries. Presumptuously, I aspired somehow to bring similar qualities to my photographs. 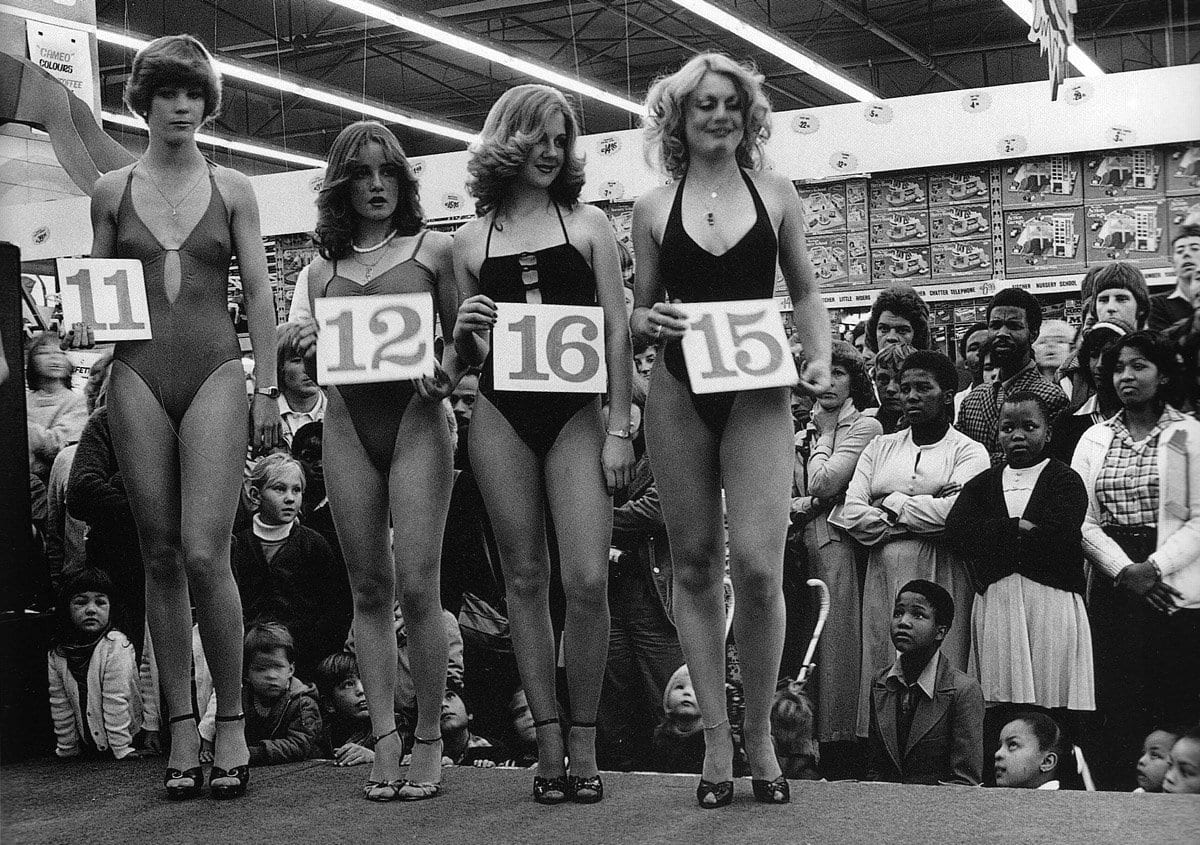 Around 1965 I began to think of an extended photographic essay on Afrikaners, something of broader scope than my explorations thus far which, although far beyond my experience, might conceivably become a book. I made contact with people in the arts, professions, business and politics and did some photography there. Whenever I could, I went into the country, seeking out and photographing Afrikaners. At the end of 1966, the beginning of 1967, I went into the Karoo and Western Cape, and made a similar journey the next year, accompanied by Lily. We had a pup tent, sleeping bags and a primus stove, and camped, very often, by the side of the road.

Travelling through vast, sparsely populated parts of the country with my camera became a major part of my life at that time. I think that our landscape is an essential ingredient in any attempt at understanding not just the Afrikaner but all of us here. We have shaped the land and the land has shaped us. Often the land was unforgivingly harsh. Yet, the harsher the landscape the stronger the Afrikaners’ sense of belonging seemed to be. Many of the people whom I met in the course of those trips had a rootedness in the land of which I was very envious. Envious in the sense that I couldn’t claim 300 years of ancestry in this country. Yet, increasingly, I felt viscerally bonded to it.

By 1968 I had assembled quite a substantial body of work. After a decade of deliberations with Sam Haskins and Barney Simon, and many rejections, one thousand copies were finally printed with the support of Murray Crawford in 1975. It didn’t sell. It was remaindered for R2.50. 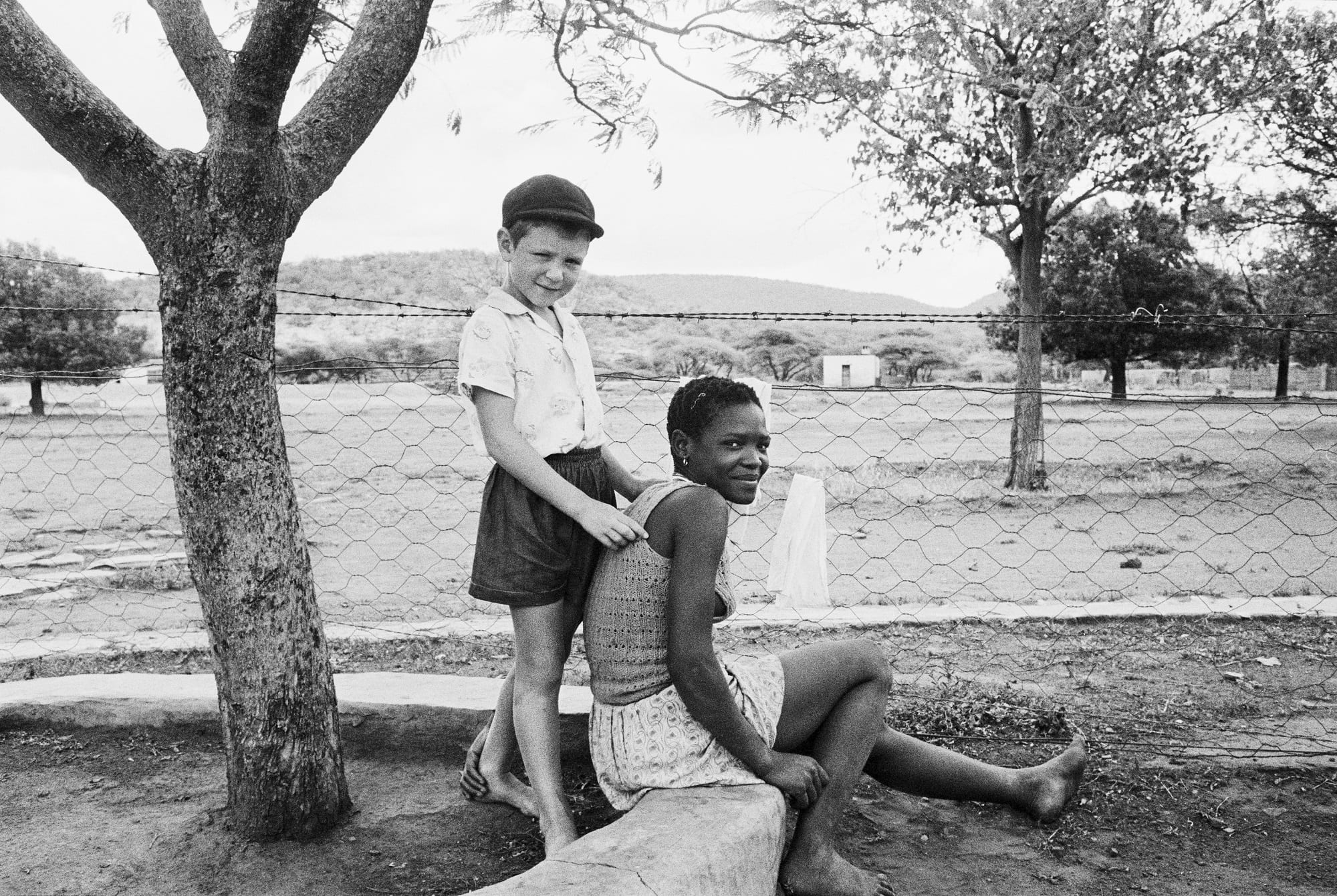 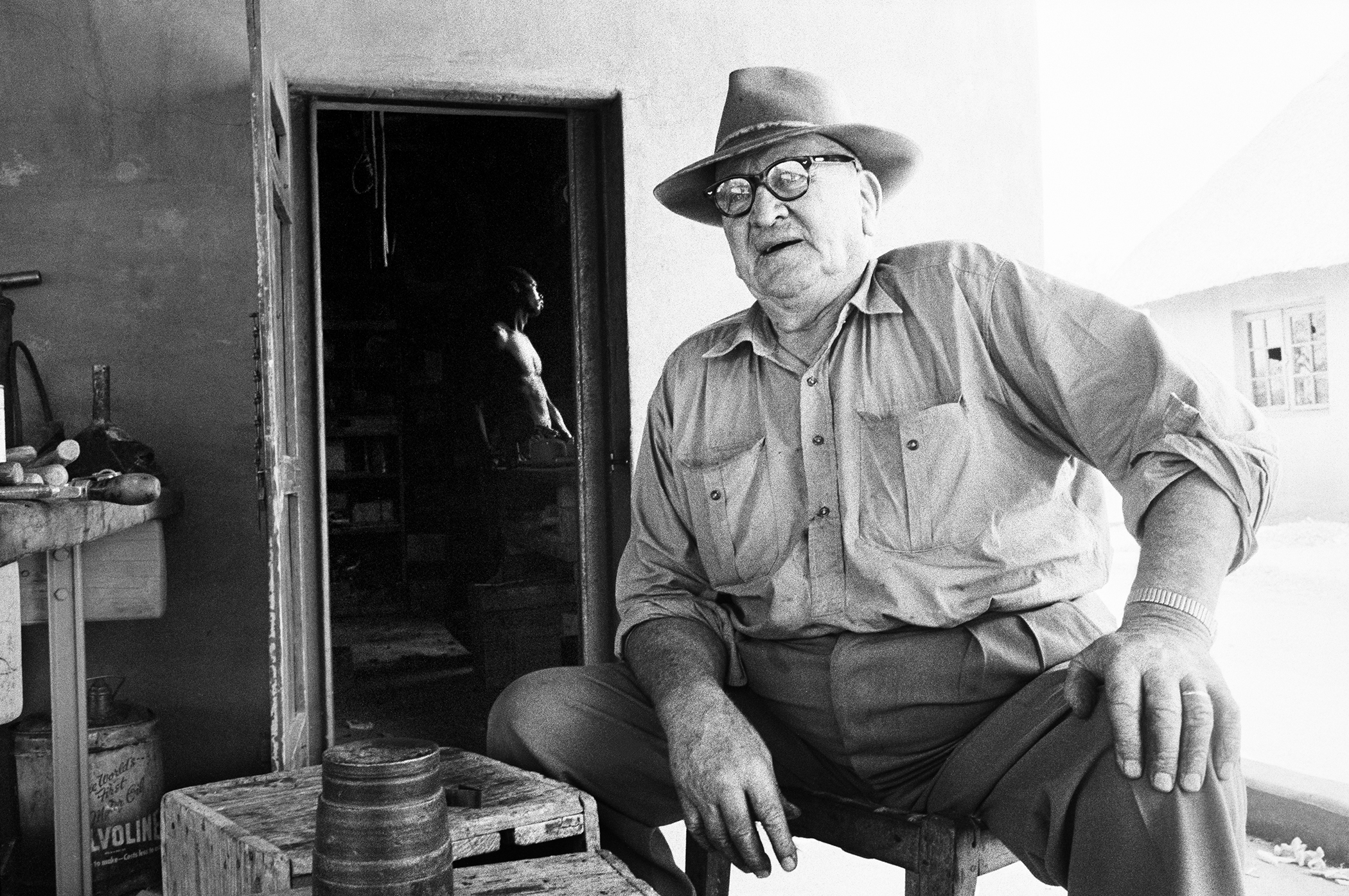 Then, in 2004, I visited the isolated valley of Gamkaskloof, also known as Die Hel, again, and when I got home, I looked again at the work I had done there in the 1960s. There was quite a lot that I hadn’t put into the 1975 book and it seemed sufficiently interesting to merit publication now, particularly since that group of highly independent small farmers had completely disappeared. This led me to think not simply of a second edition but of an expanded book, bringing into it various other photographs from my work of that time

In the years of working on what became the 1975 book I had realised that I was not concerned to present an overview or cross-section of Afrikaner life. Nor was I engaged in some sort of photographic popularisation of ‘The Afrikaners’. I wanted a tightly focussed essay without fat. So in the final version I included very little of my photography on Afrikaner professional, business and ‘cultural’ life. People in those circles had acquired values that were not then my primary interest, as well as a self-protective gloss that diluted or obscured the core of my concerns: life and values among mainly working and farming people.

The re-issued book (and exhibition) is more expansive, less concentrated, than the first. I have omitted one photograph from the original collection and added 21 others taken in the same period. This exhibition is the first occasion that these photographs have been seen in their entirety, about forty years after they were taken. I now no longer feel the anger, fear and disgust that I had then felt at what was being done to South Africa.

(© David Goldblatt. All rights reserved. All images © copyright the photographer and/or publisher)