What does it say about us who look at them?

Boris Mikhailov is sixty-three, has dyed black hair, a white moustache and a young wife. Born in Kharkov in the Ukraine, he has recently exhibited at The Photographers’ Gallery, just been awarded the Citibank Photography Prize and is now showing his work, Case History, which consists of over 400 photographs taken in the Ukraine, at The Saatchi Gallery. For anyone with a taste in postmodern irony, there is plenty to be found here. For Mikhailov takes pictures of the bomzhes, the homeless down and outs, victims of the economic and social collapse in the former USSR. But Boris Mikhailov is no Bill Brandt or Don McCullin capturing life’s gritty realities with a clear humanist agenda, nor is he an objective eye simply documenting what he sees from behind his lens. Rather he is a director, a creator of mise en scènes, who seeks out the alcoholic, the drug addict, the ill and the dispossessed and then pays them not only to pose for him, but to expose themselves – genitals, scars, menstrual blood and hernias – to his scrutinizing gaze.

This is the ultimate market exchange, the sale, for a few kopeks, of these peoples’ only resource, their bodies. Like all capitalists and entrepreneurs they sell what they have for the best offer, in this case to a photographer who takes their pictures, which will then be consumed by the international art world. The irony is brought full circle, in a game of signifiers and signs, by the fact that it is Saatchi, the advertising guru who gave us 18 years of Thatcherism, who is playing host to these photos of some of the world’s most abject. What, I kept wondering, would these subjects make of the private view, where the likes of Tracy Emin quaff champagne in her latest Agnès B, surrounded by their exposed and blistered penises, black eyes and filthy bodies; and what does it say about us who look at them?

Like all capitalists and entrepreneurs they sell what they have for the best offer, in this case to a photographer who takes their pictures, which will then be consumed by the international art world.

When I met Mikhailov he insisted his aim was to act as a witness to a particular moment in history, that he wanted to show the bomzhes as ‘normal’ people, as a ‘class’, a ‘clan’, with its own structures and psychology, before its members became, what he called, ‘hardened.’ But, unlike the work of, say Diane Arbus, who came upon her subjects in all their weird and idiosyncratic individuality, Mikailov encourages (though he would probably argue facilitates) those he photographs to act in ways that turn them into objects. The Diane Arbus ‘freaks’ were simply being themselves – however odd – and did not act for the camera. The same is true of the photographs of the young British photographer Richard Billingham, who takes pictures of his tattooed and drunken parents’ in the domestic squalor of their northern tower block. For Billingham documents what he actually sees, and though it is often shocking, there is a sense that it has been recorded with a sort of love. But one cannot escape the fact that many of Mikahilov’s subjects seem to be ‘performing’. Perhaps for a new coat, a few coins, for their 15 minutes of fame, who knows? He claimed, when I asked, that he had their consent, but just what was it they thought that they were consenting to is impossible to know. Tom Wolfe once famously wrote of the symbiosis between the bankers and glitterati of New York and Jackson Pollock. Cash was exchanged, not just for a painting, but also for an appropriated slice of life in the fast lane. Pollock had the street cred and they had the money and the contract allowed the well fed and the well bred to go back to their bourgeois apartments, their maids and their offices in Wall Street feeling oh-so-very hip for having purchased such a cutting edge artist.

EXPLORE ALL BORIS MIKHAILOV ON ASX 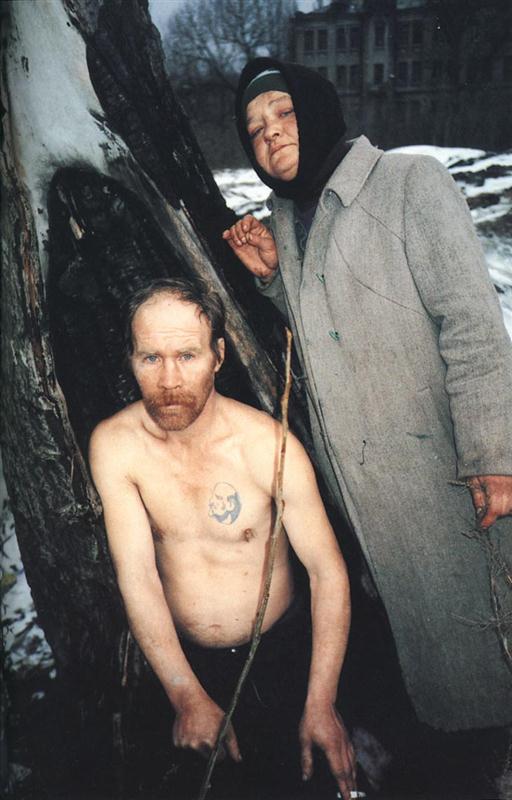 And yet it is not easy simply to dismiss all of Mikhailov’s work as opportunistic or voyeuristic, for there is a huge charge to many of these life-sized coloured photographs; an unsentimental pathos. The images of street children glue sniffing have a raw and terribly beauty. The inflated pink plastic bags from which they inhale noxious fumes echo, with a shocking aestheticism, the pink of one the young girl’s T-shirts. Many of the children, most no more than 10 or 12, are blond and beautiful, if somewhat scruffy, and pose and smile, half-out of their minds, with their bottles and cigarettes. Like so many street children around the world the pathos and the pity lies in the hope and innocence still visible behind the world-weary and brutalised faces. These children sleep, eat and rob in gangs, which is the nearest that many of them will ever know to a family and their early sexualization is not only a way of earning cash, but all too often a substitute for other forms of communication and warmth. The images of crumbling, rusting factories, of a newly installed Coca Cola sign poking incongruously out of a drift of dirty snow in front an old Soviet building, of men carting filthy animal ribs flapping with a few ribbons of meat through the pot-holed streets, the broken and bruised faces of the drunks and the drugged all speak of social disintegration, anarchy and decay.

When I tried to push him on the issue of ethics he was evasive and talked only of making work that was new, of showing things in a way that had not been seen before.

And it is perhaps this that gives a clue as to how we might read the seemingly ‘amoral’ positioning of Mikhailov towards his subjects. When I tried to push him on the issue of ethics he was evasive and talked only of making work that was new, of showing things in a way that had not been seen before. For him ethics were ‘not special’; anything that was legal was ‘ok’. Though he did claim to be concerned about what his subjects felt, though it was hard to establish – as he hid somewhat disingenuously behind his lack of English – whether this stemmed from compassion or a desire to create a photographic charge. Yet maybe it is this very lack of empathy, this ‘amorality’ that most truly reflects the condition of social breakdown that has resulted from the break-up of the Soviet Union. Perhaps it is this harsh vision – where life is shown as cheap and expendable and where individuals can rely only on themselves and their wits – that mirrors a reality that for us, in the west, is more shocking than the poxy penises of Mihailov’s subjects displayed like pastiche Mapplethorpe’s. For whatever we feel about the injustices of the old structures and systems, this exchange between the have-nots and the photographer-who-has, has come about as a result of capitalism, not communism. Maybe the shocking truth implied by these photographs is that compassion itself is a liberal luxury. In his book that accompanies the exhibition Mikhailov writes “The rich and the homeless – the new classes of the new society – this was, as we had been taught, one of the features of capitalism.”

Sue Hubbard is a freelance art critic, novelist and poet.

(© Sue Hubbard. All rights reserved. All images © copyright the photographer and/or publisher)