“But since I work in a spontaneous way, I have to be a little bit sneaky because I don’t want them to know that I’m going to take a picture of them.”

EGG: How do you describe yourself as a photographer?

Bruce Gilden: I guess I’d be classified as a street photographer because I work in the street. In fact, if you saw me on the street, you would see a very active, energetic person who probably, while taking a picture, would be jumping at somebody in a certain athletic mode, in a certain dance. All photographers do this, I guess. There could be a film made on the dance of photography, and I think I, in my special way, made a contribution to that.

EGG: Do people know you are taking their picture?

BG: Some are taken unawares, some are surprised. Some didn’t know what hit them. And I think most people like to be photographed. But since I work in a spontaneous way, I have to be a little bit sneaky because I don’t want them to know that I’m going to take a picture of them. When I use an electronic flash, some people do realize the action of me jumping at them like this with the flash and they might be taken aback, but most don’t [react]. Sometimes I work so close with a 28mm lens that they don’t realize that I’m taking their picture. Sometimes they think that I’m taking something behind them. And I think I have a very good bedside manner, so to speak, because I’ve been doing it doing it many years. I’m very comfortable, and that minimizes the possibility of having problems. I’m very intuitive and I’m able to select the people that I think wouldn’t mind or at least not show that they’re minding. I don’t presume that everything I do is fine. But, I am showing a slice of life in New York City that in several years won’t be there any longer. Many of the people that I photograph are people who have a certain individuality in the way they walk, the way they dress, the way they look. But the world is getting smaller and smaller, so people are tending to look more alike, dress more alike. All of these differences are disappearing, and it’s making it tougher to find people to photograph. I believe I’m preserving that so maybe one day my pictures would be considered documentary photographs. 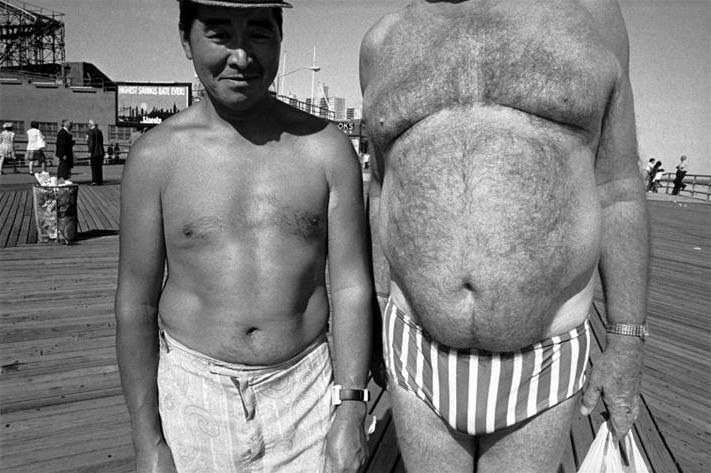 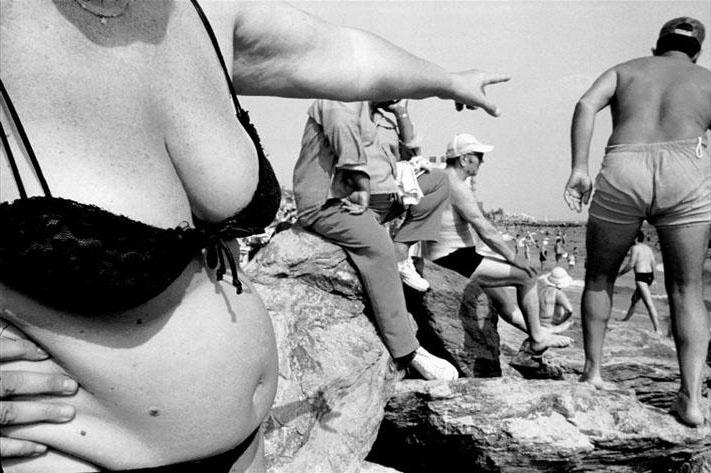 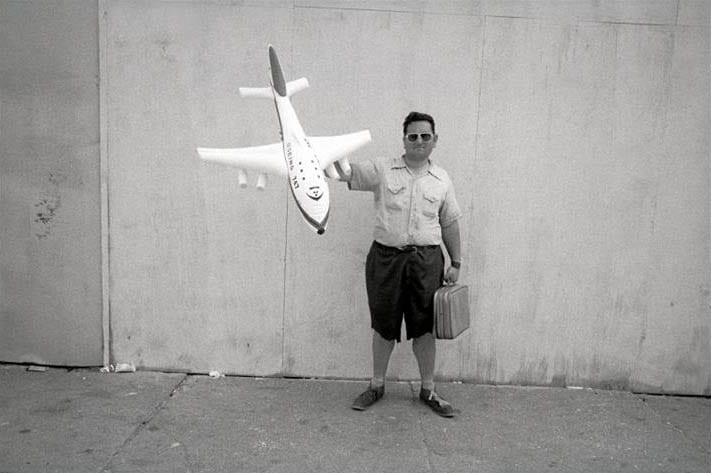 EGG: How important is craft in your work?

BG: Well, I guess it gives it a strength. The good photographs that I’ve taken through the years work within the frame. The composition is very good. I’ve had people say to me they’re so surprised that I can get that composition full framed, uncropped, and yet they have a very strong emotional content. That’s the combination that I’m striving for — a strong emotional punch in the gut, yet the picture is beautifully composed. So, actually, I think a saving grace of my photography is that my pictures are elegant. I don’t consider myself a journalist. My pictures are made to be seen in exhibits on walls. They look beautiful on the wall, and yet you have this subject that can be tough to certain people. It’s this perverse thing because lots of times people don’t want to see what’s going on in the world. But if someone doesn’t make a record of what is going on in the world, then they could just turn their backs. Those who are interested in photography or walk into an exhibit or open one of my books — hopefully something seeps into their consciousness about these things that are going on in the world. Because the world is all we have, but it isn’t the most wonderful place; it could a [much] better place.

“That’s the combination that I’m striving for — a strong emotional punch in the gut, yet the picture is beautifully composed.”

EGG: Do you consider these photographs to be portraits or do they serve some other function?

BG: I love the people I photograph. I mean, they’re my friends. I’ve never met most of them or I don’t know them at all, yet through my images I live with them. At the same time, they are symbols. The people in my pictures aren’t Mr. Jones or Mr. Smith or whatever; they’re someone that crossed my path or I’ve crossed their path, and through the medium of photography I’ve been able to make a good picture of that encounter. They have a life of their own, but they are also are symbols. I would say that I respect the viewer, but I don’t want to tell him everything. Hopefully, there’s an element of mystery involved. I like him to look at a picture and say “Well, that that reminds me of someone,” and make up a little story in his head, make him smile, brighten up his day. I think this is what I’m trying to achieve with my photographs.

EGG: Bottom line — why do you take photographs?

BG: I do photographs because that’s what I do. I could tell you some fancy answer that would sound pretty good, but it’s in my guts. If I was forced to do something else, I guess I could do it. But I am passionate about photography and I feel I have no choice. You have a choice whether you want to look at them or not. I mean, my upbringing was middle-class and it was okay, but it was tough emotionally for me. Most things I learned, I found out about in a secretive fashion — from overhearing conversations between my mother and father or whatever. So I guess I’ve always been in tuned to watching. Photography is a voyeuristic medium, like looking into other people’s windows at night. I’m not a peeping Tom, but if I’m walking down the street — you see the lights on and those beautiful bookshelves and the people drinking martinis — I like to look. So I translate that into taking pictures. It gives me something to do. No matter where I go in the world, I go specifically to take photographs. I don’t take vacations. 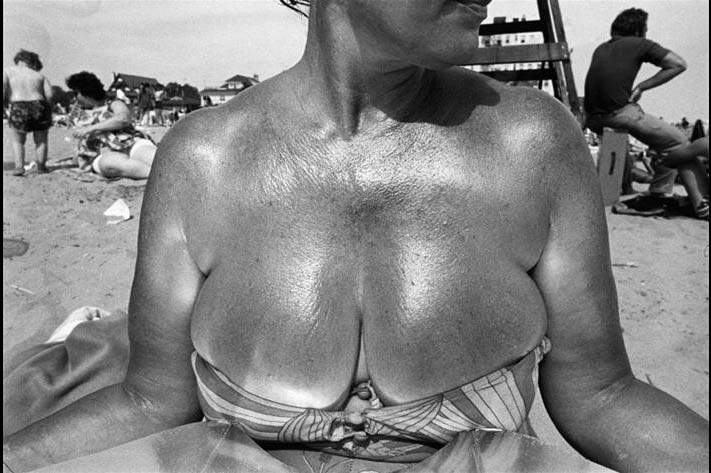 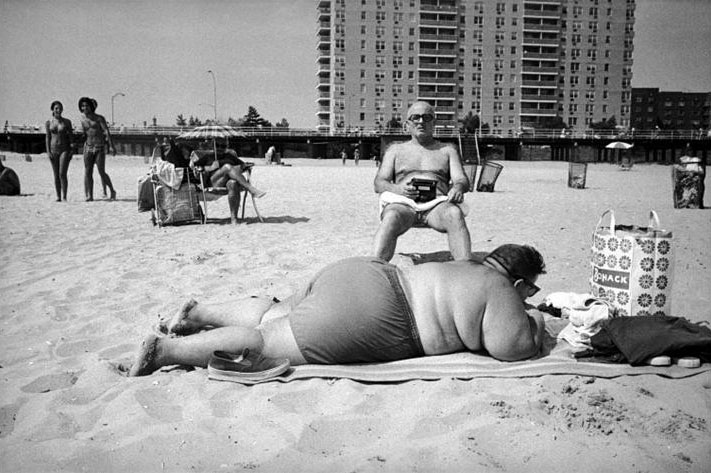 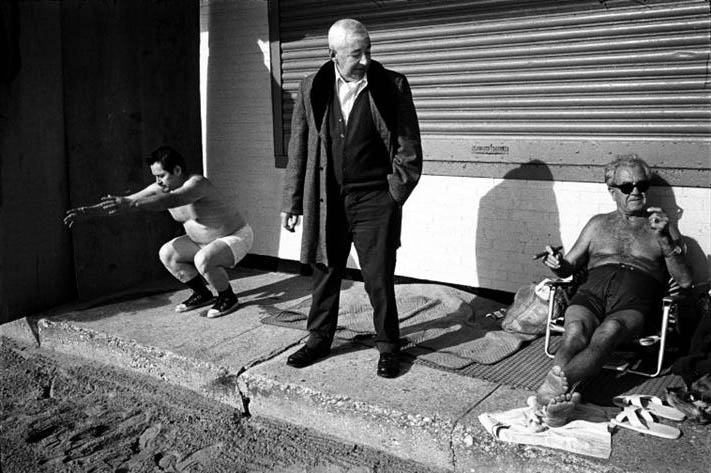 “The older I get, the closer I get — I mean, in proximity to my subject. I’m showing more while using a smaller palette because I’m just taking someone’s face, yet I’m saying more.”

EGG: But New York City seems to be your favorite subject matter.

BG: I’ve been taking pictures on the streets of New York for over twenty years. It’s tough to keep going over the same streets and keep breaking new ground. I find that when I don’t have a camera, I look up a lot in Manhattan, because we have some very nice architecture. But when I’m on ground level, generally, I don’t look up because I’m busy looking for people to photograph. So I bend down and I hand hold the flash in my left hand and when I see something, I take it. Generally, I notice things in my pictures that I didn’t notice when I was taking [them]. I describe those things as lucky accidents that make a picture into a good photograph. Other times, you snap the shutter without realizing there’s something in the frame that crossed your path that makes the picture not work. 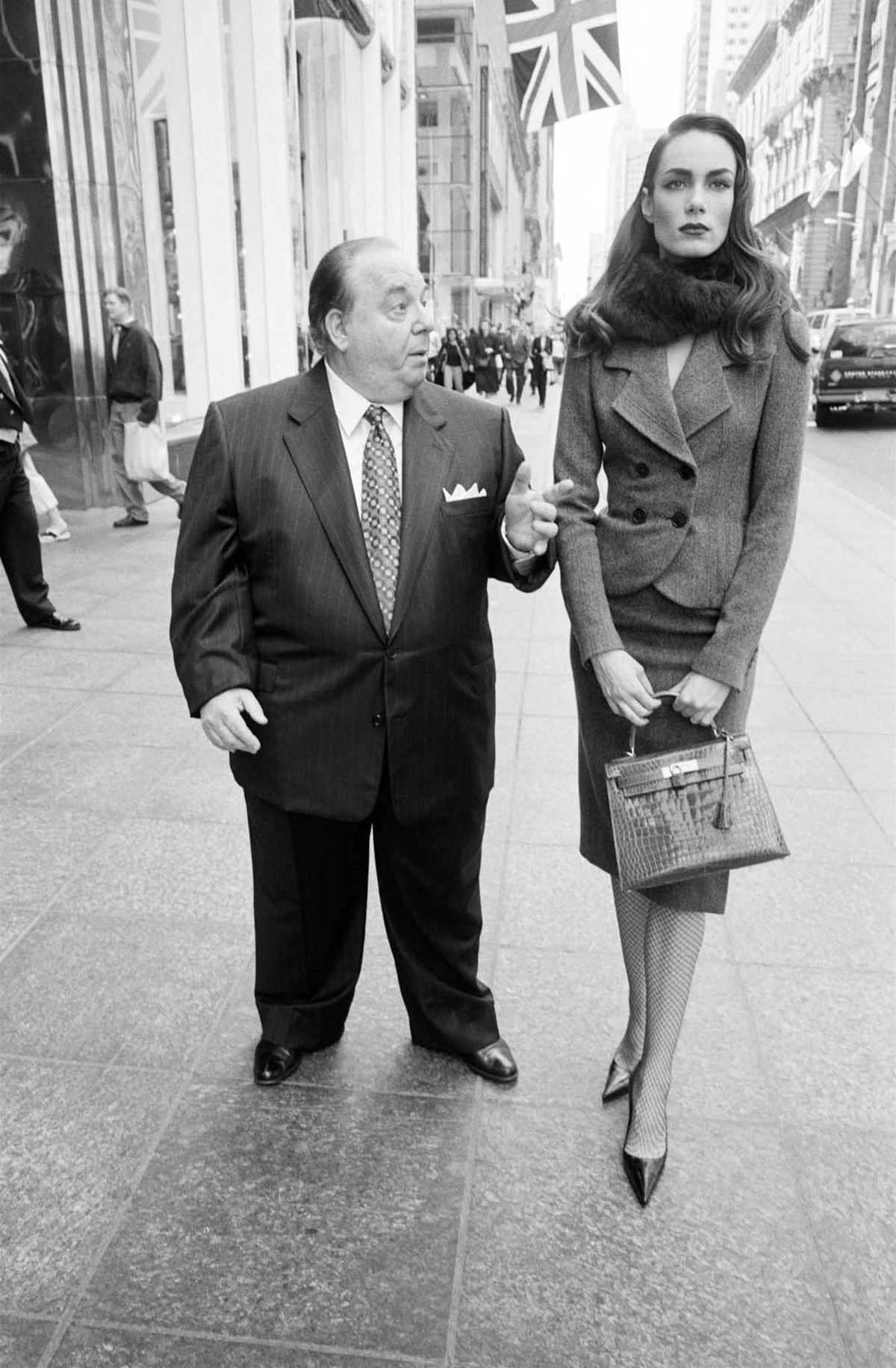 EGG: How has your work evolved?

BG: The older I get, the closer I get — I mean, in proximity to my subject. I’m showing more while using a smaller palette because I’m just taking someone’s face, yet I’m saying more. Because in that face is a whole life. When people walk around the city, they daydream or they’re thinking — so I try to catch them unawares. When I succeed in the composition and in the emotional content, I get a strong photograph. Instead of switching to larger cameras or some other technical change, I go in deeper in the direction of the close-up. There are very little variations in the twenty years I’ve been photographing in Manhattan, and those variations come only after I take breaks — not a vacation, but a cold, or working on something else. I don’t like taking the breaks, but there’s always a different angle that comes up. So what’s happened over the years is I’ve gotten closer to people. Like I said, my pictures are not only about the form, but they’re about the emotion. And the closer you get, the easier it is to get a strong emotion and relay that emotion to the viewer. And all of these things were in my subconscious, I’m sure. But when I look at the pictures, these things come up and reveal what is probably going on. The thing was done, and then the thought, because it just happens intuitively. I think if you think too much about something, especially on the street, it’s gone. So it has to come from within, a natural outgrowth, and you have to let it flow. If I was busy thinking, Well, what am I going to do? Am I going to do this? Am I going to do that? — if I’m uncomfortable, I can’t photograph.

“I always tell the people that the best advice I can give you is to be yourself and to photograph what you’re comfortable in doing.”

EGG: What advice can you offer other photographers?

BG: A lot of people who come to photography come to it with baggage, and they can’t get beyond their own baggage that they bring with them. For example, when I was in Haiti in 1984, I passed these funeral processions. I got out and I started to take pictures, but I was very cautious because I didn’t know how the people would respond. Then, after going to the cemetery over several weeks, I was able to even try my flash because I found that most people didn’t mind. And I think that’s a very good lesson. In your culture it may not be done. In another culture they may love it. The people in Haiti, they don’t get dress up all the time and they couldn’t afford to have a camera, so many of them asked me to photograph them at the cemetery or the burial. “We’d be more than honored,” they’d say. So that’s a very important lesson. You know, the world doesn’t just revolve around that one person. And it doesn’t revolve around me either. I’ve traveled the world. And that’s one thing I’ve realized. When I’ve spoken about photography, I always tell the people that the best advice I can give you is to be yourself and to photograph what you’re comfortable in doing. And I think that’s the best answer.