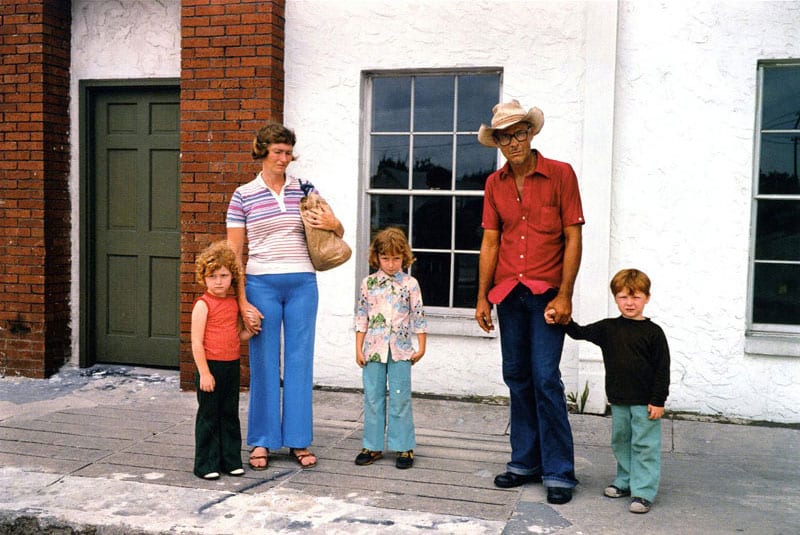 Mitch Epstein trusts in the power of enraptured perception. Navigating the American landscape, he intuits moments that seem blessed, harmonious, and eternal.

Despite their evidence of a plastic-and-polyester society, his photographs of vacation sites such as Martha’s Vineyard, the Everglades, and Cape Canaveral recall the revelry, music making, amorous dalliances, and peaceable kingdoms seen in depictions of the Golden Age. A nude couple converses on the beach, a guitar temporarily at rest, while a Dalmatian sleeps, color-coordinated with the sand (plate 40). A ripe young woman cradles a snake while dappled light and patches of color embroider the scene into a sensuous tapestry (plate 37). Barely clad, prepubescent girls luxuriate on the hood of a car, drenched in the sun’s magic, while adults relax inside the car or mount trailers to witness the view (plate 41). 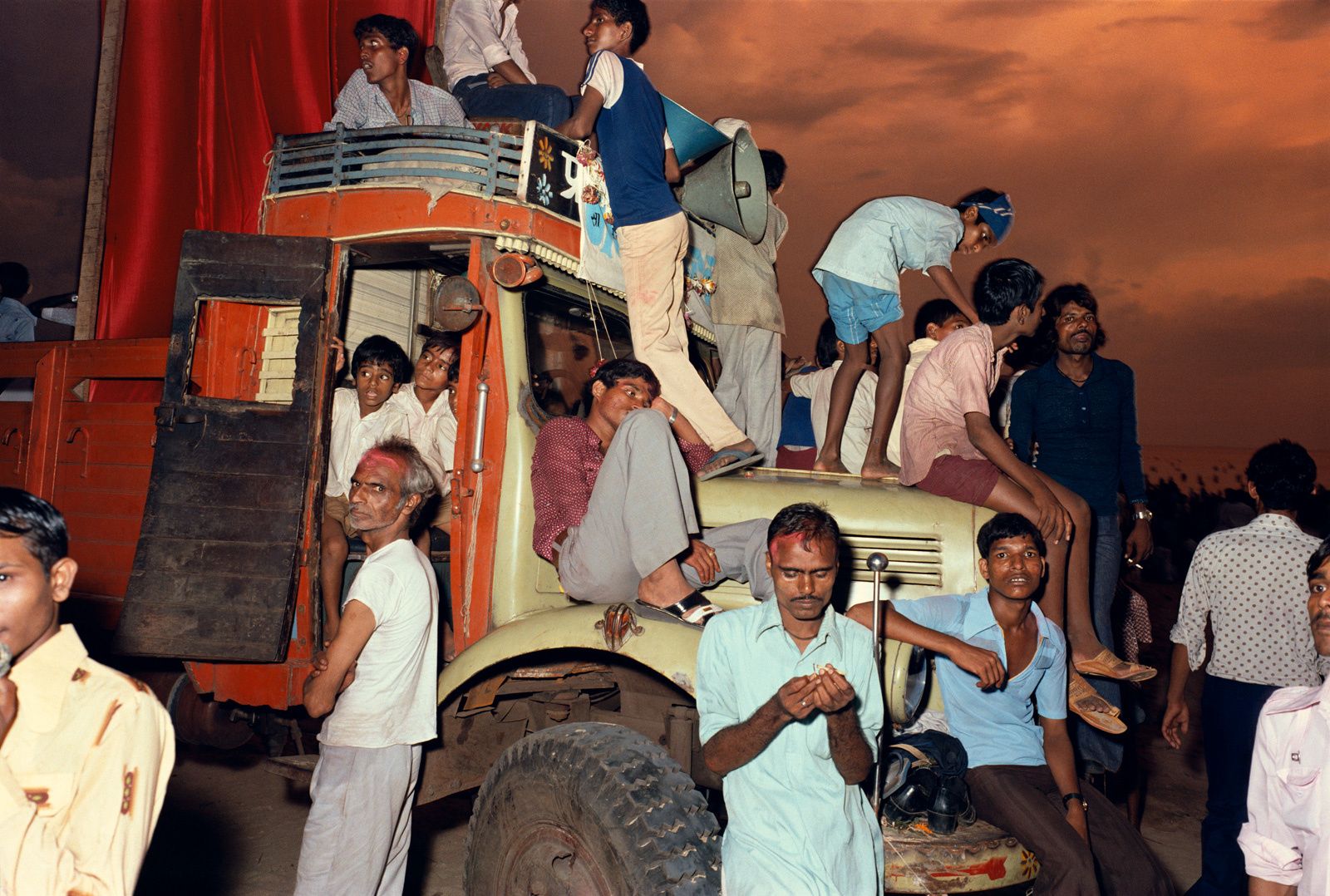 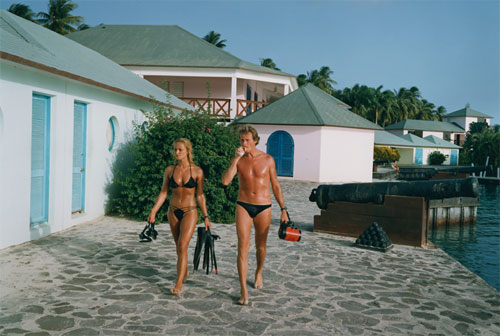 It would seem that Epstein has unselfconsciously reincarnated vignettes from the central panel of Hieronymus Bosch’s The Garden of Earthly Delights. But whereas Bosch’s lusty pairs couple in bubbles, mussel shells, and fruits, frolic in water, or antically ride on assorted four legged creatures, Epstein’s families enjoy cars and trailers or drive air-powered boats through the Everglades (plate 32). At Cape Canaveral they gather to worship rocket ships, today’s symbols of masculine potency and thrust (plate 41). As in Bosch’s prelapsarian world, the races exist in harmony, for a black man and a white man seem ecstatically in tune with each other, the bird kingdom, and by extension, the natural world (plate 36).

Epstein does not reiterate Bosch’s warning that lust leads inexorably to hell. But as a citizen of the 1980s, he knows that the “greening of America” in the 1960s has not led to the diminution of social and psychic ills to the extent that Charles Reich envisaged. Epstein’s photographs reflect this by being both sophisticated and primitive, sly and innocent, naïve and worldly. His garden of Delights is also a Garden of Consumer Goodies, in which gluttony competes with lust. And people caught in the summer rush on the Martha’s Vineyard ferry know weariness better than joy (plate 35). Moreover, the woman’s high-heeled clogs and bleached hair belie the natural look and the natural life. 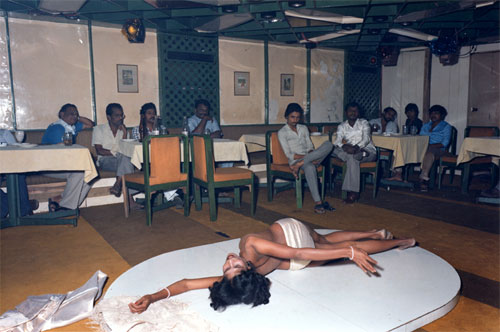 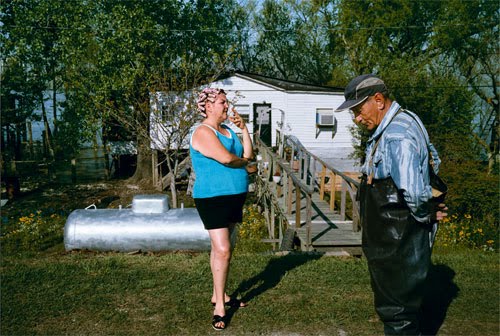 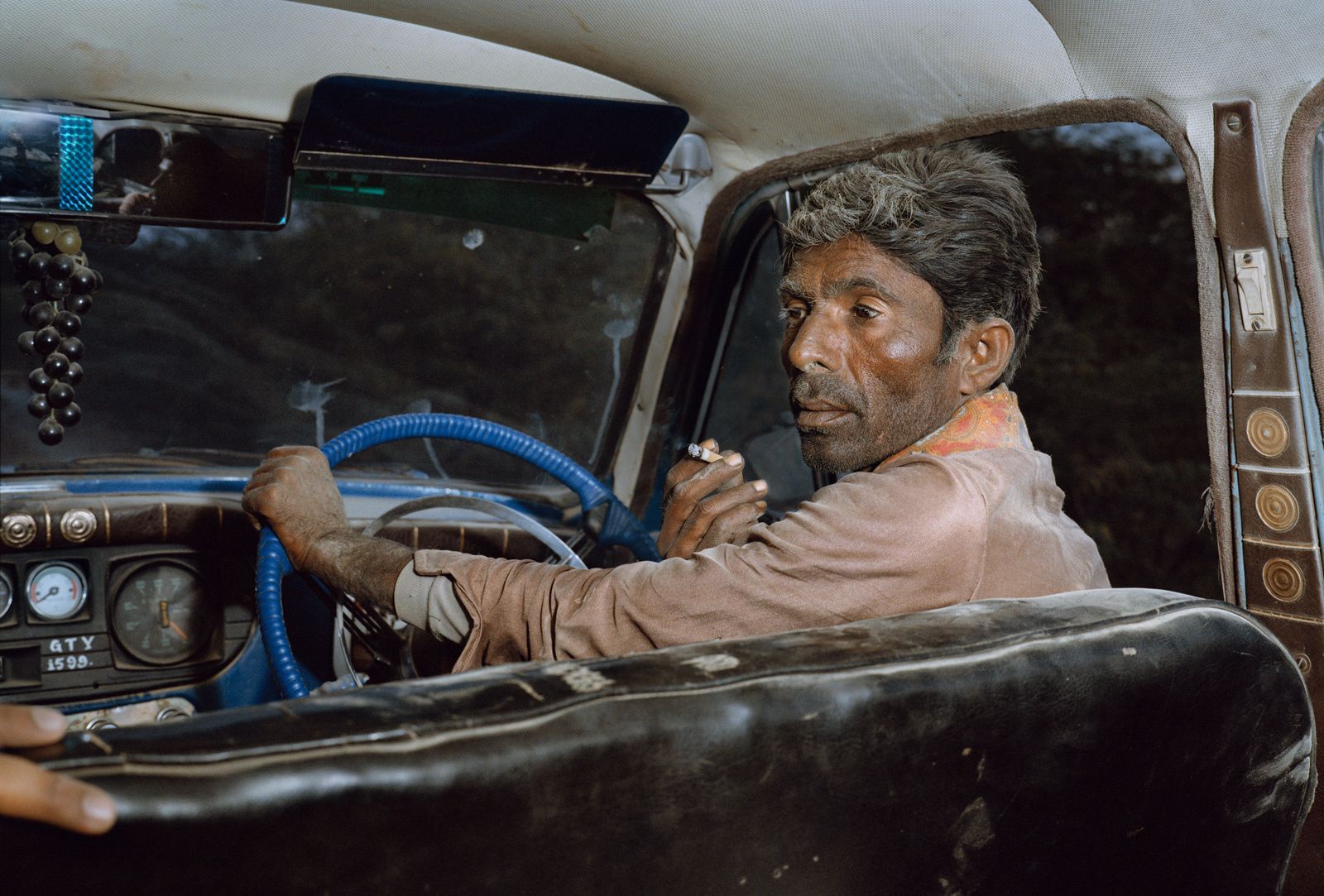 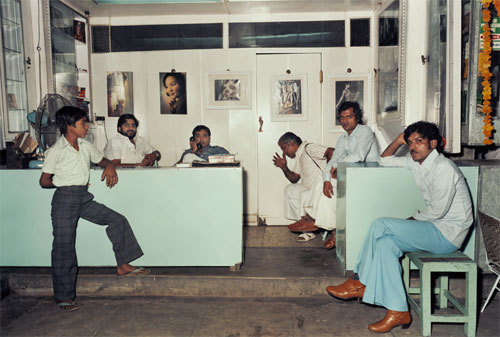 Clearly, human weakness and stupidity exist in Epstein’s ideal world, but he renders them with such delicate irony that folly seems the natural and not entirely undesirable condition of mankind. The source of evil is neither the snake nor the wheel, both of which act as sources of sensuous, ecstatic pleasure in his photographs. The hell to pay is merely the imminent return to the workaday world.

Although arcadian romance envelops these scenes, Epstein never excludes evidence of the industrial age. His photographs are at once dreamlike and vividly real, and there is poetry in their duality. Whatever the symbolic narrative, Epstein consistently provokes our sense of actuality—these events are common practice. We can sense the soft, palpable air of summer evenings, when forms release the light they have been soaking up all day. We can feel the absolute stillness of a summer morning of the tedium of traveling to a destination where relaxation might be possible.

This is not to say that the intensity of these photographs equals the intensity of the experience depicted. Rather, as T.S. Eliot once observed, the effect of the work is “different in kind from any experience not of art” and the “significant emotion” resides in the artwork itself. That Epstein’s photographs ring with notions of the ideal cannot be attributed to the duplicative powers often associated with photography. His gift is instead illuminative, the result of recognizing the potential for inexplicable magic in the worlds clear facts, Shimmering color passages arise from his meticulous recording of detail. A blonde palette with dashes of rich color paraphrases the smiling aspects of life, and graceful gestures are gathered from everyday chaos, all to evoke carefree ideal states. Yet by grounding for us to enjoy and share in his vision. Rejecting the ponderous effects of intellectual self-consciousness, Epstein blends archetype and visual epiphany to reveal the world with expansive appreciation.

(© Sally Eauclaire, 1987. All rights reserved. All images © copyright the photographer and/or publisher)