“The first time I met up with the hyena men, as they have become known, the group was staying in a ramshackle three-bedroom apartment in Dei Dei Junction, a suburb of the Nigerian capital, Abuja.”

The Hyena and Other Men

Ahmadu was 15 years old when he joined his father’s business in the small town of Malumfashi in Katsina State, Nigeria. This meant that he had to acquire his own hyena, as his family made their living as entertainers accompanied by hyenas, snakes and monkeys, in addition to selling the fetishes and herbal medicines that are popular in Nigeria. Abdullahi’s grandfather, Nalado Ahmadu, taught him how to catch and control the animals, and introduced him to the charms that help subdue the creatures and protect their captors from harm.

Today Abdullahi is an experienced animal handler in his early thirties, who travels across Nigeria as part of a troupe of entertainers including his younger brother, Yahaya, and other members of his extended family. Together they work with three hyenas, two rock pythons and four baboons. According to Abdullahi, this is a tradition exclusive to his family, and only they are taught the secrets of how to trap and take care of the creatures.

The first time I met up with the hyena men, as they have become known, the group was staying in a ramshackle three-bedroom apartment in Dei Dei Junction, a suburb of the Nigerian capital, Abuja. The animals were housed in specially constructed boxes. Every member of the party had sores and scars on their faces, legs and hands – legacies of times when the animals suddenly turned hostile and pounced on their handlers with their teeth and claws. ‘We use a heavy stick to hit the hyenas on the head when they misbehave,’ Abdullahi said. ‘We knock them down on the ground. All of us hold the sticks in case the animals become aggressive.’ However, Abdullahi’s daughter, six-year-old ‘Mummy’, played with the animals with no sign of fear. She even rode a hyena as if it were a miniature, slope-shouldered pony. ‘She cannot be harmed,’ said Abdullahi. ‘It’s the same thing with the snakes and monkeys. She has taken a potion of traditional herbs and has been bathed with it. So her safety from the animals is guaranteed for the rest of her life.’

The animal handlers make use of herbs, concoctions, powders, amulets and esoteric incantations to catch and train their captives, protect themselves against harm and build up their own confidence. Amulets are also placed into ‘akayau’, metal rings tied around the men’s ankles, to enhance their dancing skills. The handlers believe that humans are capable of transforming themselves into animals such as hyenas, hence the need for powerful voodoo charms and incantations as protection.

When setting out on an expedition to capture a hyena, Abdullahi and his partners drink a protective potion and also bathe themselves with it. They travel to the caves and forests of northern Nigeria accompanied by hunting dogs which assist in sniffing out the animals. The young men use a powerful torch to light their way through the darkness, believing that the potion they drank has made them invisible to the animal. At the entrance to the animal’s lair, they chant incantations and blow clouds of white powder, a traditional African tranquiliser, at its face, rendering it senseless and easy to subdue. Sometimes, the powerful light from the hyena’s eyes might damage the bulb of the torch, but the men eventually have their way. ‘After bringing the animal out of the cave,’ said one of the handlers, ‘it will fight, since it’s not familiar with humans. A traditional medicine is administered to its body so it automatically becomes obedient to us. It begins to obey all our commands.’

The animal is subjected to one or two months of training. It must learn to live alongside other animals and humans, and to engage in different kinds of play without becoming violent. In return, the handlers feed the hyenas with scraps purchased from abattoirs (a goat every three days or so helps prevent the animals becoming aggressive). Maintaining good relations with the animals, said Abdullahi, requires both skill and tact. They’re alert and the slightest sound keeps them awake,’ he said. ‘They hate hot environments so they’re kept in a cool place. When necessary, cold water is sprinkled on their bodies to comfort them. They’re very sensitive creatures.’

Galadima Ahmadu, who controls a hyena named Jamis, explained that the handlers wear ‘bante’ dress and charms. ‘If we give onlookers the charms, they can play with the animals as well and they won’t be harmed,’ he said. The concoctions sold to the public are meant to protect against snake, hyena or monkey bites, while the charms and amulets shield people from the antics of witches and wizards, which many Nigerians believe are responsible for their misfortunes. The animals are good business. The family has sold traditional potions and charms for many years, but trade increased dramatically after the acquisition of the hyenas and other creatures. ‘We parade the animals on the streets,’ said Mallam Mantari, the owner of a 13-year-old hyena named Mainasara. ‘They can be very funny and the public showers them with money.’ 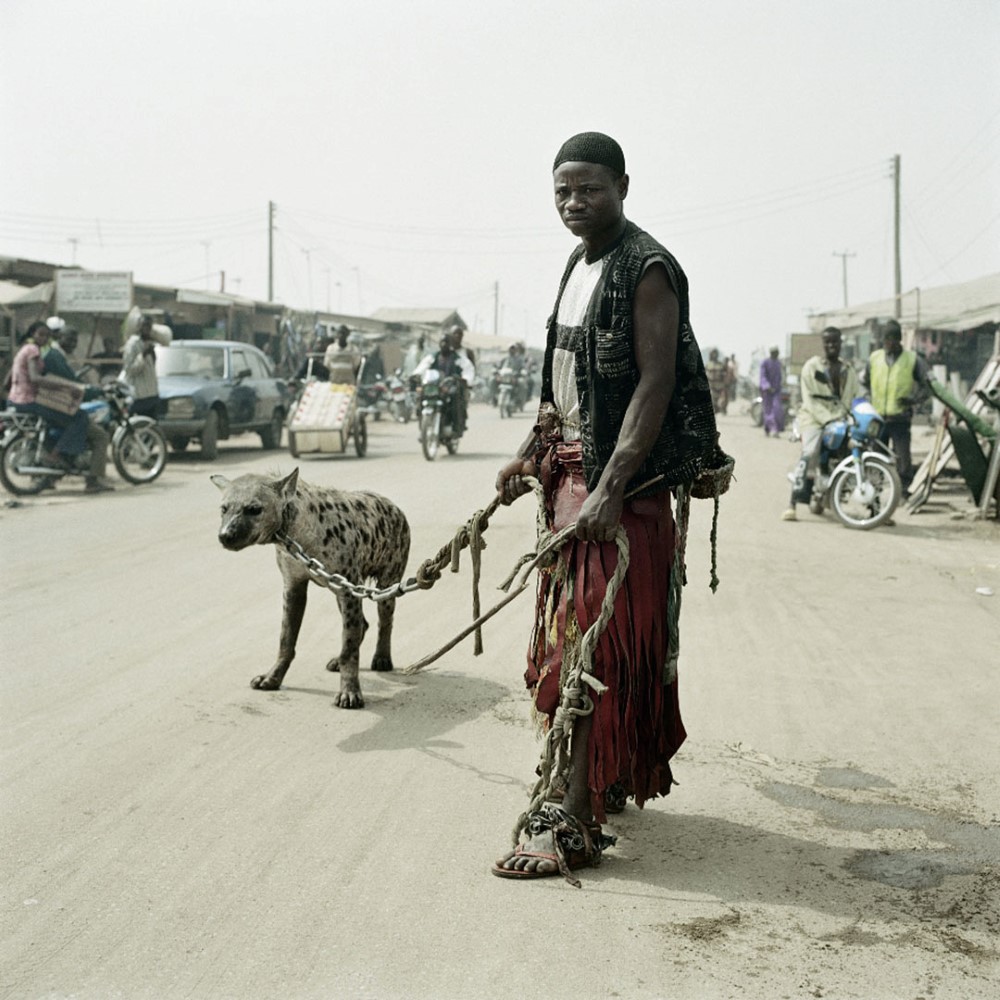 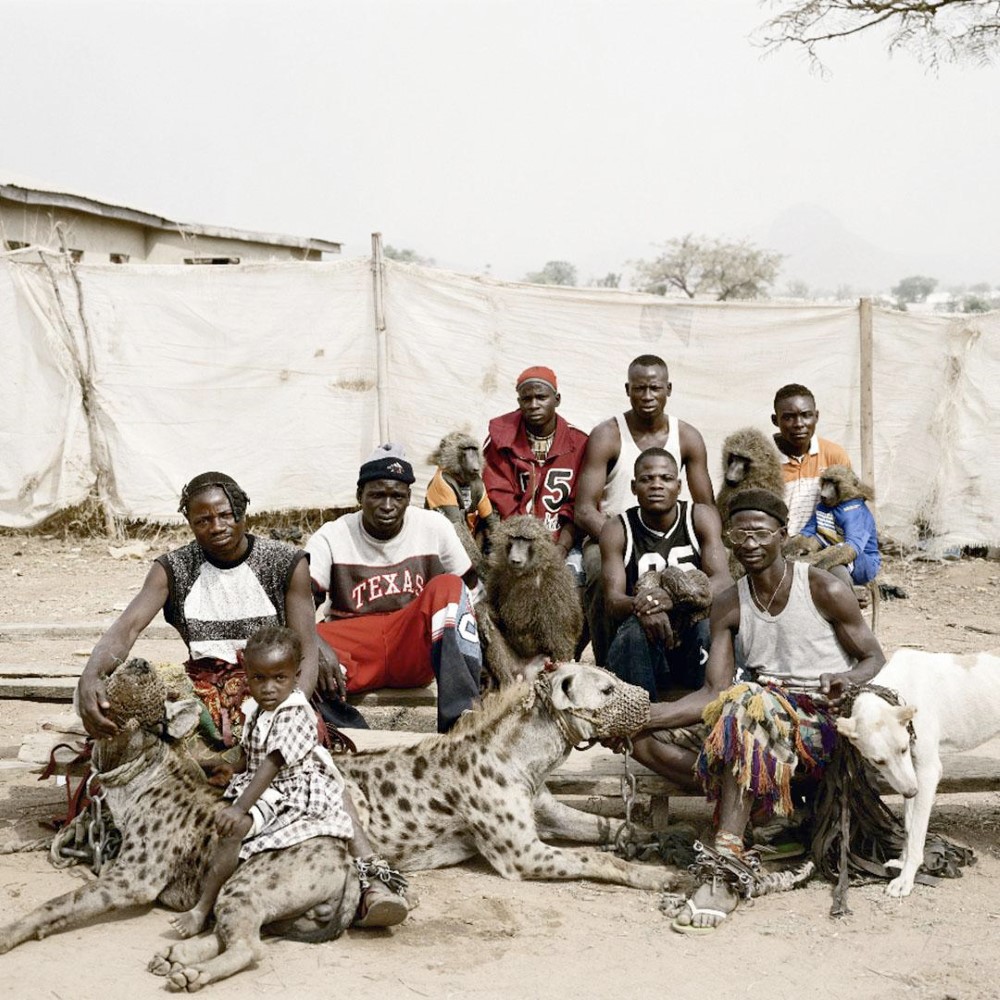 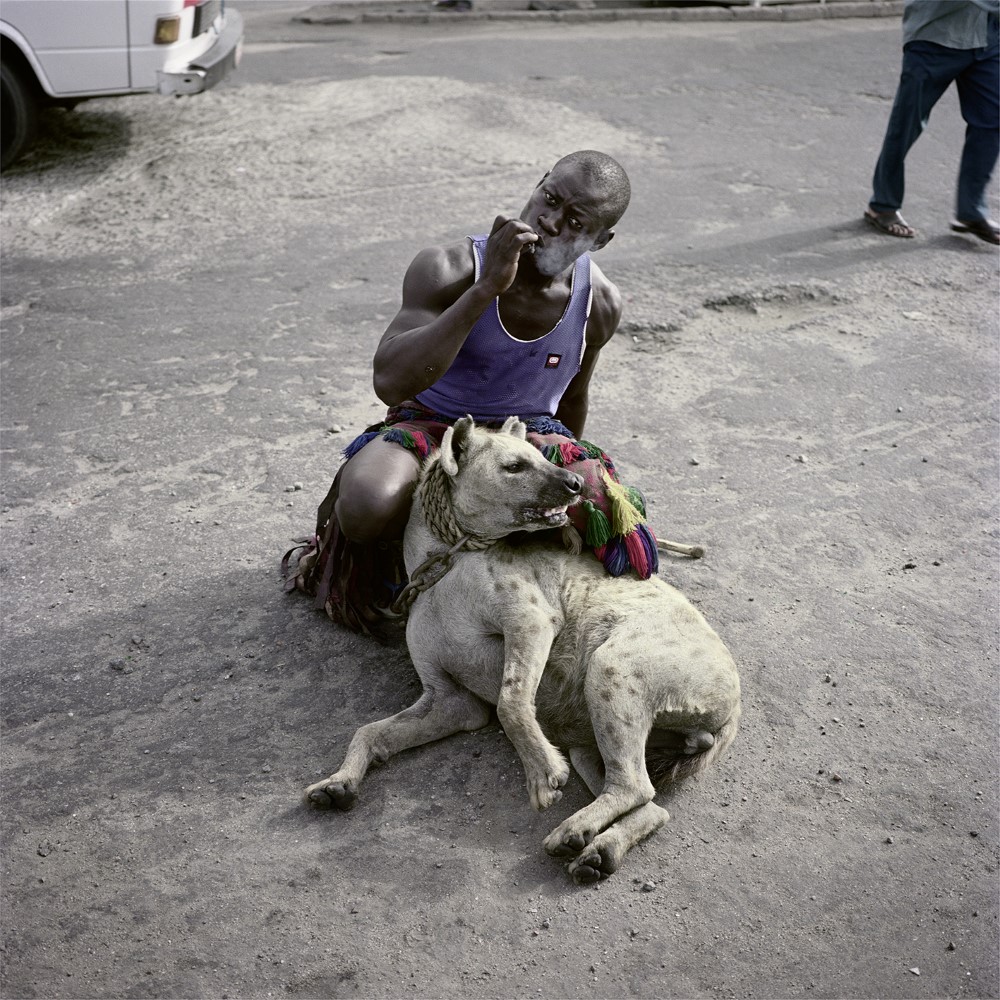 “As unemployment and poverty continue to bite in Nigeria, youths in particular must devise inventive ways of making money for survival. ‘I’ve been in this business since childhood,’ said Abdullahi Mohammed, a quiet young man who is responsible for a baboon called Frayo.”

As unemployment and poverty continue to bite in Nigeria, youths in particular must devise inventive ways of making money for survival. ‘I’ve been in this business since childhood,’ said Abdullahi Mohammed, a quiet young man who is responsible for a baboon called Frayo. ‘This animal has helped us. The money we make gives us food every day. This runs into a few thousand naira.’ I travelled with the group from Ogere-Remo to Bar Beach at Victoria Island in Lagos, and watched as scores of fascinated people were entranced by the spectacle of the hyenas, monkeys and snakes being paraded through the streets. Commercial buses and private cars stop, causing a traffic jam, while passengers gape at the animals as they perform their tricks. Within seconds people start to gather and a crowd forms, everyone staring in wonder.

Yahaya Ahmadu explained how they operate: ‘When we get to a place, we make the baboons do somersaults, jump on the back of motorcycles and shake people’s hands. Those watching are impressed with our animals. Before you know it, naira notes start to fly here and there. Some throw them at the baboons, others give directly. The baboons bring the money to us and we put it in the common till.’

Important members of the troupe include the drummers, Nura Garuba, Abdulkarim Lawal and Sanusi Ahmed. They follow the hyena men as they travel from city to city, beating the traditional Hausa drums that are the signal for the baboons to start dancing. Others in the group are traditional healers. According to Yahaya, ‘They make herbs to take care of snake bites, scorpion stings and other animal problems. We also have herbs for spiritual problems, and illnesses such as typhoid fever, malaria and syphilis. When we get to a market, street junction or public place, people gather to watch us. We use the opportunity to sell these herbs to them.’

In addition to street shows, the animal handlers take part in film projects and make money from the sale of wild animals. ‘Any animal that people want, we can get for them,’ said Yahaya, who claims that they have supplied hyenas, pythons and other animals to zoos in Nigeria, Cameroon, Burkina Faso and Benin. ‘A mature hyena is sold for one hundred and fifty thousand naira, but a cub is more expensive at two hundred and fifty thousand naira. This is because a cub can be trained. An adult baboon goes for fifteen thousand naira, a young one for eight thousand. A python goes for eight to ten, depending on the size.’

“Not everyone views the hyena men in such a favourable light. Although they have licenses to operate their business from a number of states in Nigeria, officials occasionally harass them and prevent them moving their animals about.”

The hyena men use the hunting dogs that accompany them to trap smaller animals for food. Konyami Murtala, who handles a baboon called Mora, said the dogs catch rabbits, grass cutters, antelopes and other small animals in the forests surrounding their camps. These animals are skinned and eaten or offered for sale. People who benefit indirectly from the hyena men’s business include the bus drivers who transport the animals from town to town. According to Lekan Fabuyi, who plies the Ogere-Remo/Lagos route, the drivers charge higher than usual rates for carrying the wild animals, making the animal handlers their preferred customers. Other beneficiaries are the provision store owners and food vendors who locate their small businesses at the outskirts of towns, where the hyena handlers usually set up their makeshift wooden huts amid abandoned houses, cluster of shacks and the inevitable cattle markets. Store-owner Biola Adekumi said: ‘When they’re around we sell more. Also, they give us fun, especially the younger ones. Their animals make us laugh and feel lively.’

Not everyone views the hyena men in such a favourable light. Although they have licenses to operate their business from a number of states in Nigeria, officials occasionally harass them and prevent them moving their animals about. One official commented: ‘These animals are wild. No matter how you handle them, an animal is always an animal. Tame an animal for ten years and one day it’ll behave like an animal. For instance, if a hyena breaks loose it can attack and kill people. I don’t think these people should be allowed to carry these animals about.’

The entertainers have also been accused by the Nigerian police of using the animals to threaten or intimidate members of the public into parting with money or possessions. In June 2004 a report in Lagos newspaper This Day claimed that an armed ‘gang who used a hyena and a monkey to rob their victims’ had a shootout with police. The paper reported that two gang members were killed and four arrested, while a policeman ended up in hospital after being bitten by a hyena. The hyena and a monkey were shot.

Abdullahi Ahmadu gives a different side of the story: ‘We refused to stop at a police checkpoint, so the police opened fire on us, killing two hyenas and two fellow policemen. To protect themselves, they fixed a charge of armed robbery on us. Thank God, the case has died a natural death.’ The bus driver, Lekan Fabuyi, defended the hyena men, saying: ‘They eat by taking these animals around. Stop them and they take to criminality. Those criticising cannot give them another job.’

Indeed, the troupe’s diverse activities generate enough money for their daily survival and to establish maize and yam farms. Abdullahi Mohammed, for example, owns a farm in Danja in Katsina State, and Yahaya said the group has plans to establish a cassava farm in Ogene-Ofada in Kogi State.

After three days of following the group, I was preparing to leave when the hyena men brought their menagerie of animals to the side of a road in Lagos. The drummers struck a beat and the baboons pranced about and jumped. Passing cars stopped and their passengers craned their necks through the windows and gaped. Motorbike riders parked at the fringe of a gathering crowd and stared in fascination. The handlers shouted at the baboons and they somersaulted and performed several acrobatic movements. Before long naira notes started being thrown at them. As one onlooker commented, ‘Though their way of making money is odd, these people are in real business.’

(© Adetokunbo Abiola, 2008. All rights reserved. All images © copyright the photographer and/or publisher)