Lee Friedlander was born in the logging mill town of Aberdeen, Washington in 1934. He began photographing in 1948 because of a “fascination with the equipment,” in his words. His first paid job was a Christmas card photograph of a dog for a local madam named Peggy Plus. He later attended the Art Center School in Los Angeles to become a professional photographer, but left almost immediately. In 1956 he moved to New York and began freelancing. Because of his love of jazz he found work producing album covers. He sought magazine assignments and eventually met people in New York who would change his life: Robert Frank, Diane Arbus, Garry Winogrand, Louis Faurer, Helen Levitt, Richard Avedon, and, from a previous generation, Walker Evans. Friedlander and his new friends, along with innovative curators like John Szarkowski and Nathan Lyons, changed the course of American photography in the 1960s and 70s. He and Maria DiPaoli were married in 1958 and moved to a small town on the Hudson River where they live today. 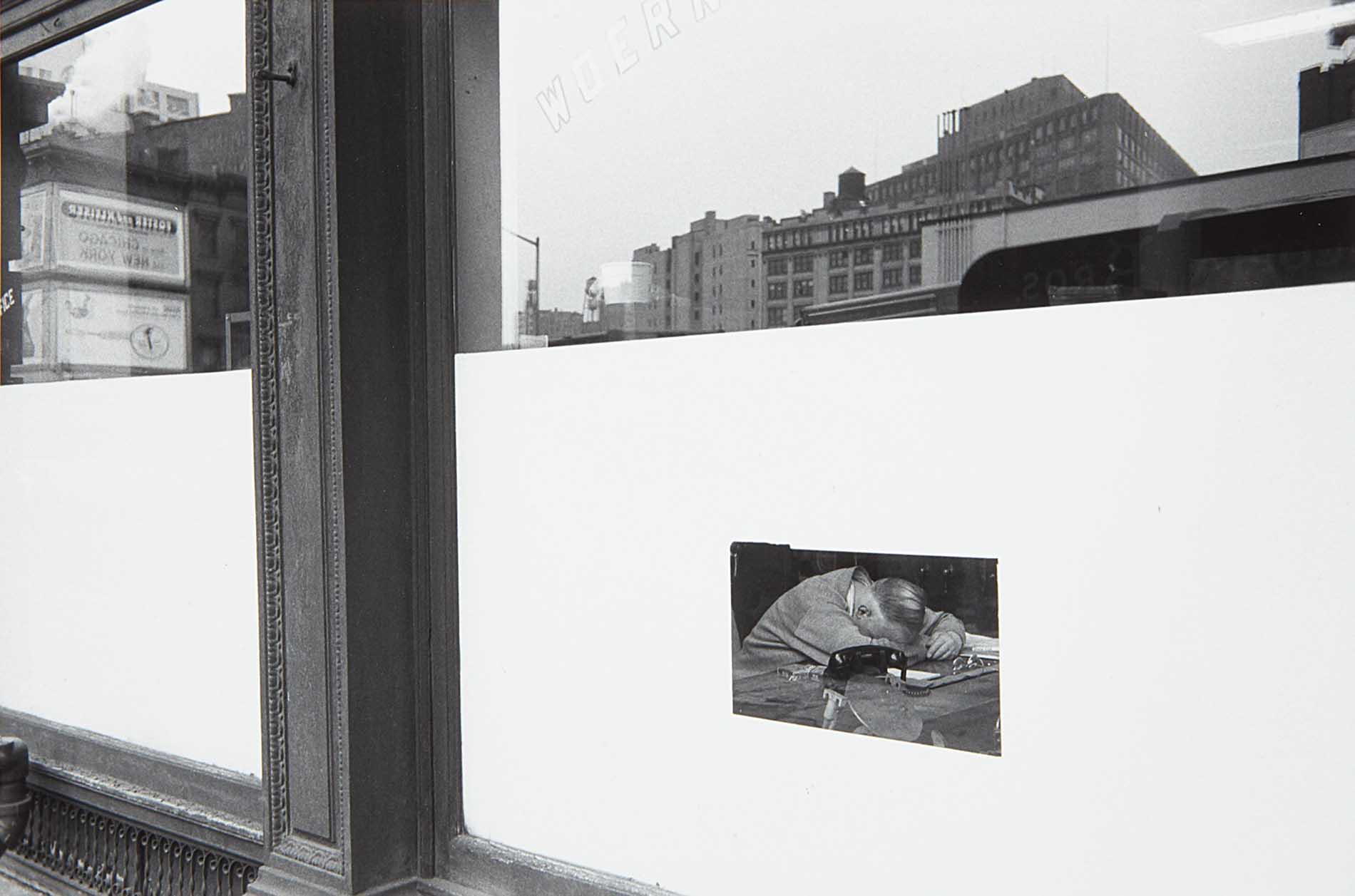 American culture and society changed radically as Friedlander began his career — the Civil Rights Movement, the Vietnam War, political assassinations, the Hippies. He preferred, however, to try to understand this time by looking to the side of the causal action or purposefully away from it–ongoing life in the street, tangential evidence of change. Ultimately, and with great honesty, he recorded his own reactions to change, and discovered that photography is better at identifying changes in the self attached to the finger on the shutter than recording transformation of the society at large. His first book, Self Portrait: Photographs by Lee Friedlander, Haywire Press, 1970, is based on this discovery and contains the seeds of almost all of his later work both formally and in the sense that we never lose sight of Lee Friedlander as the point of view, even superficially as his shadow or reflection in the image. This is what he sees based on his own wry humor and complex sense of order. It is our business what we do with it. Since Self Portrait, he has published fifteen books, matching the sequential journey through a book with his own internal ordering of how he sees with the camera.

A friend likes to tell how his father, when asked to help fix or explain a problem on the farm where he grew up, would always respond, “Just look at it.” Lee generally says something like this when asked how his photographs work or why he made them. And he means it in the same spirit. First, if you don’t figure it out for yourself you will quickly forget what you discover and it won’t be of any use to you. And second, don’t use somebody else’s way of looking or you won’t see anything. To the close observer, Friedlander even builds in safeguards to keep his audience from seeing his way.

It has become increasingly difficult to see photographs as the visible world has been almost completely plastered over with lenticular representations of itself. Strangely, as the photograph becomes the world, it disappears — or perhaps more accurately, it loses its informative opacity. And because photographs look so much like seeing, this process threatens our possession of our own vision. It could be said that Lee Friedlander has made a lifelong job of trying to reverse this phenomenon. He marches straight into the heart of enemy territory, grabs photography by the throat, using its own weapons against it, and forces it to give us back the use of our eyes. 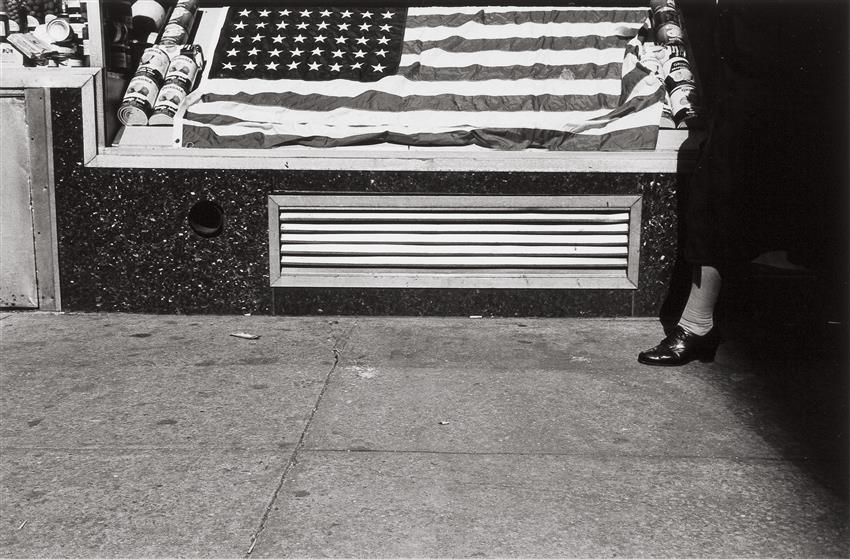 One way he has accomplished this is to take the camera (he refers to this as “walking his camera”) where it wouldn’t normally go. The At Work exhibition, published as a catalog by D.A.P., New York, in 2002, is a compilation of six commissioned projects that required Friedlander to photograph in a variety of work places. It is often politically expedient to keep the American worker tied up in abstract rhetoric so unless there is a big industrial accident covered by the media, we rarely get to see what other people’s work places look like. Friedlander went to these places — from small manufacturing shops to a super-computer assembly plant — with no agenda but his own, not looking to make pictures of interesting things but to make interesting pictures of what was there. A tension builds up between our curiosity about what these places look like and Friedlander’s invention of ways to look at it. It is tempting to wonder how many intrusive exposures it took before these people dropped their guard and returned to the alert, Zen-like state of labor developed long ago to transcend poisonous repetition.

Another strategy Friedlander has employed over the years involves a surprisingly small but sharp set of formal tools used in a wide array of combinations. His most recent project, published in 2004 as Sticks and Stones: Architectural America by D.A.P. and Fraenkel Gallery, is a definitive set of instructions for the use of these tools. Most are ways of animating the flat photographic image by building overlapping layers–reflections, transparencies, scrims of fences or branches that we must look through as well as at. We find ourselves wondering where the surface of the print is in relation to the information in it. Other strategies cause the image to release its information in a slower, more controlled way than we are used to in advertising or journalism — unexpected juxtapositions, especially of foreground and background elements, and found text that causes the viewer’s mind to shift gears, and to read in multiple, often conflicting ways. He recently commented that as a child he was fond of moving around quietly and “lining things up” with his eyes. As a mature artist–he considers Sticks and Stones his best book so far–he has transformed this childhood game into picture building skills that function on the level of metaphor, allowing him and us to connect sight and understanding — to both see and see through.

When asked early on what the Sticks and Stones project was about, he said, “architecture, or maybe more accurately, architecture of the picture.” The whole project has its own architecture. Some of the images are organized into categories, common arenas of observation, as well as image making tools. In the book these are separated by images containing cars — similar to Robert Frank’s punctuation of The Americans with images of American flags. The last section of the book, however, contains photographs that don’t fit elsewhere. Often these single images are the beginning of alleys alongside the larger structures that we are invited, or perhaps dared, to explore on our own.

Rod Slemmons is Director at The Museum of Contemporary Photography.

Around the WEB: Lee Friedlander