“The photographs for Suburbia weren’t done by accident. I put together a shooting script of events that I wanted to photograph… Christmas, Thanksgiving, Fourth of July, Birthdays, et cetera.”

In 1972, while a news photographer for the Livermore Independent, Bill Owens made the photographs that comprise Suburbia. Initially presented in a 1973 volume entitled, Suburbia, they have since been exhibited in museums and galleries in Europe and North America and become the classic photographic description of the American suburban dream. Where some critics have associated Owens’ work with the New Topographics school of photography that emerged in the 1970s which attended to the “social landscape” and presented the artifacts and architectures of middle and late twentieth century industrialized cultures, others have placed Owens within the documentary tradition of Diane Arbus, Walker Evans and Weegee (Arthur Fellig). This critical tension is instructive. Does Suburbia render a particular community, Livermore, California or does it depict a social class? In considering this question, it is important to note that Owens began his project after taking a class in visual anthropology at San Francisco State University.

In an Art a Go Go interview, Owens explains that, “the photographs for Suburbia weren’t done by accident. I put together a shooting script of events that I wanted to photograph… Christmas, Thanksgiving, Fourth of July, Birthdays, et cetera. I got a small grant, and began taking photographs every Saturday for a year, so basically Suburbia was shot in 52 days.” As opposed to other street photographers of the day, such as Garry Winogrand and Lee Friedlander who, in the tradition of Cartier-Bresson’s and Robert Frank’s politically charged “decisive moment,” constructed their photography around formal visual juxtapositions and visual puns, Owens built his work around the intersection of a neutral journalistic stance and the dry, terse, deadpan commentary of the residents themselves. Where other photographic political critiques of the new America relied solely on visual epiphanies, Owens makes his case accessible, biting and explicit by grounding his visual information in the unambiguous starkness of the residents’ commentary.

Owens’ photographic methodology of personally interacting with his subjects may remind UCR/CMP visitors of the museum’s 1998 exhibition by Douglas McCulloh, Chance Encounters: The LA Project. Where LA Project renders a broad, diverse and multi-layered portrait of the 16-million person Los Angeles basin using random selection processes to select photographic sites, Owens’ Suburbia focuses upon a much smaller California region and a single year. Still, both photographers interact with their subjects, collect anecdotes and delight in and critique the mundane and quotidian.

At first glance, Owens’ images of backyard barbecues, women at the hair salon, children playing, men and women at work or at leisure, portray a world seemingly insulated from the social changes of the time. In 1972, President Richard Nixon was reelected to a second term of office, there was a break-in at the Watergate Hotel, the Vietnam conflict dragged on, HBO began pay-TV service for television, the FCC established rules for community access channels and a game called, “Pong” launched the video game craze. Yet Owens’ captions to his photographs testify that appearances can be deceiving. In one photograph, a woman is seen standing in her kitchen, her hair in curlers, holding her baby. The caption explains, “How can I worry about the damned dishes when there are children dying in Vietnam?” In another image, a Black woman stands in her kitchen. She remarks, “I enjoy the suburbs. They provide Girl Scouts, PTA, Little League, and soccer for my kids. The thing I miss most is Black cultural identity for my family. White middle-class suburbia can’t supply that. Here the biggest cultural happening has been the opening of two department stores.” In 1972, the suburbs may offer a haven for middle-class life, but that haven cannot entirely exclude the world’s misery or fully incorporate cultural diversity. 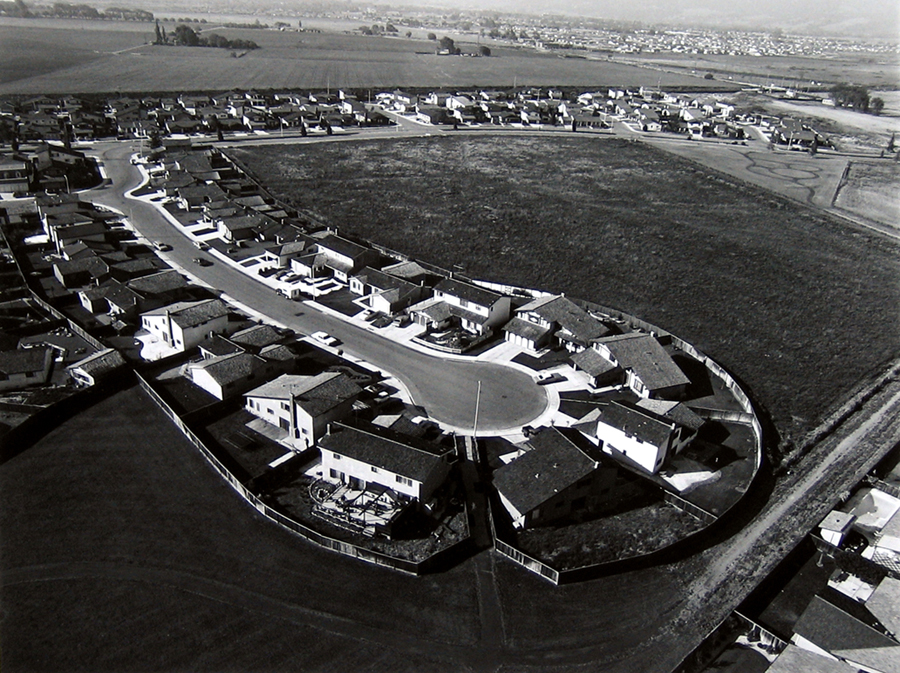 At first glance, Owens’ images of backyard barbecues, women at the hair salon, children playing, men and women at work or at leisure, portray a world seemingly insulated from the social changes of the time.

Although in many respects a devastating critique of early seventies middle-class suburban life, today, Owens’ Suburbia can be viewed through the prism of seventies nostalgia. The fashions seen in Owens’ photographs are the same fashions seen in ads directed to contemporary youth. Hair curlers may be “out,” but hip hugger, bell bottom jeans could not be more au courant.

UCR/CMP is presenting Suburbia during a time when artists, historians and cultural critics are reexamining suburban life. Recently, the suburbs have been the subject of films including American Beauty and The Ice Storm, a New York Times Magazine account of how the “Suburbs Rule,” and two new books, Suburban Nation and Picture Windows. These more recent accounts differ sharply from Owens’. If Suburbia renders the suburbs as cultural vacuums, contemporary investigations depict them as far more sinister. What used to be called suburban is today increasingly and pejoratively termed “sprawl.” Indeed, the opening chapter of Suburban Nation: The rise of sprawl and the decline of the American dream details the history and primary components of sprawl. Seen as unchecked growth and development and understood in opposition to the traditional neighborhood, sprawl is characterized by authors Andres Duany, Elizabeth Platter-Zyberk and Jeff Speck as a conglomeration of single-family housing gated subdivisions segregated by gradations of housing price; shopping centers, office and business parks, and civic centers that are surrounded by large parking lots and inaccessible to pedestrians; and roadways that serve to increase traffic load. For Duany, Platter-Zyberk and Speck sprawl is the fast-food version of the American dream, providing excellent value for its price, but offering little nutritional value for the soul.

In his renderings of neighborhoods without trees, wide thoroughfares without sidewalks and streets lined with identical houses, Owens’ photographs hint at things to come. But the segregated and largely anonymous world described by the authors of Suburban Nation is not equivalent to the daily life seen in Owens’ Suburbia. While Owens’ captions sometimes include expressions of frustration over perceived cultural shallowness, Owens’ photographs depict children at play and neighbors who speak to one another as friends. While imperfect, Owens’ photographs depict a community that is entirely unlike the sterile, alienating world described in Suburban Nation.

Duany, Platter-Zyberk and Speck’s vision of “sprawl” raises the question of whether a project like Owens’ Suburbia could be executed today. In 2000, would a California visual anthropologist be welcomed as Owens was, or would she be escorted out of the gated community by a private security force?