Then she appeared at the door, and compared with my image of her, she might almost have been her own daughter.

A Visit with Diane Arbus – On a Hot Summer Day in New York, One Month Before Her Death

On a hot, muggy afternoon in New York, I took a taxi to a point far out on the west side of Greenwich Village. Although I had lived in New York for many years previously, the White Horse Tavern and Hudson Street were the farthest one normally went west, and I was intrigued by the sight of marvelous old warehouses and huge produce trucks, their cabs bending at right angles from the main body of the truck as they maneuvered red to park. Man-size letters adorned red-painted walls and buildings with corrugated sheet-metal awnings held in place by thin, spider-like metal rods and cables, and shoulder-high platforms , some of them moving like elevators, were everywhere. This was an area where work goes on while most people are asleep. I walked on towards the river and saw the West Side Drive on the horizon and strange, iron-riveted supports forming an orderly, steel forest. As I turned to the left, parallel to River Drive, I noticed a funny building rather like the factories I had passed but with the highway running through the rear part of it. It was, in fact, a factory which had been converted into places for people to live. The noise of the city disappeared, and the cobble crossings and old shops and houses were surrounded by the strange silence of a transplanted suburbia. A little way farther down the street the old factory building!ding ended and I came upon a modern sculptured fountain and hoards of children jumping about with hoses~a and buckets of water, their cries echoing in the U-shaped courtyard of a twentyfive-storey structure. A number painted on the side of the building and a letter next to it increased my confusion, and I asked a guard; dressed like a happy, retired cop, complete with badge, where I was. ‘Yeah, dis is Westbeth’, he said. ‘Who ya lookin’ fawh?’ ‘Diane Arbus’, I replied, and he motioned me to a doorway and told a woman to show me the way to the apartment in this strange labyrinthian construction. In a few moments the elevator had taken me up to the right floor, and, not knowin whether to turn left or right, I came across the number of the apartment. As I rang the bell, I looked up and down the corridor, ungainly in its height and length and devoid of any personality. I found myself question- ing the mentality of the people who built this building as a residence for artists, for the discrepancy between the well-meaning motives and the brutality.of the execution was blatant. This seemed to be nothing more than a concentration of cells to the right and left, each garnished with a peephole and a prominent number.

This was to be my *first meeting with Diane Arbus, although we had spoken to each other on the telephone, and last time she had said, ‘Perhaps we shall meet some time when we are both old and dying.’ Yet here I was, and as I heard her footsteps I thought, ‘We are not old, and we are very much alive.’ The realization that she was descending some stairs on the other side of the door told me that the flats were built on two levels and mode me more hopeful about what I should find on the other side of the ominous metal door which separated her dwelling place from these forbidding corridors. As I heard the latch being released, I had a lightning vision of Diane Arbus seated, matron-like, on a park bench wearing a beige flannel coat and two Mamiya Reflex cameras about her bosom and lap, her hands held like a sixth-grade school teacher. 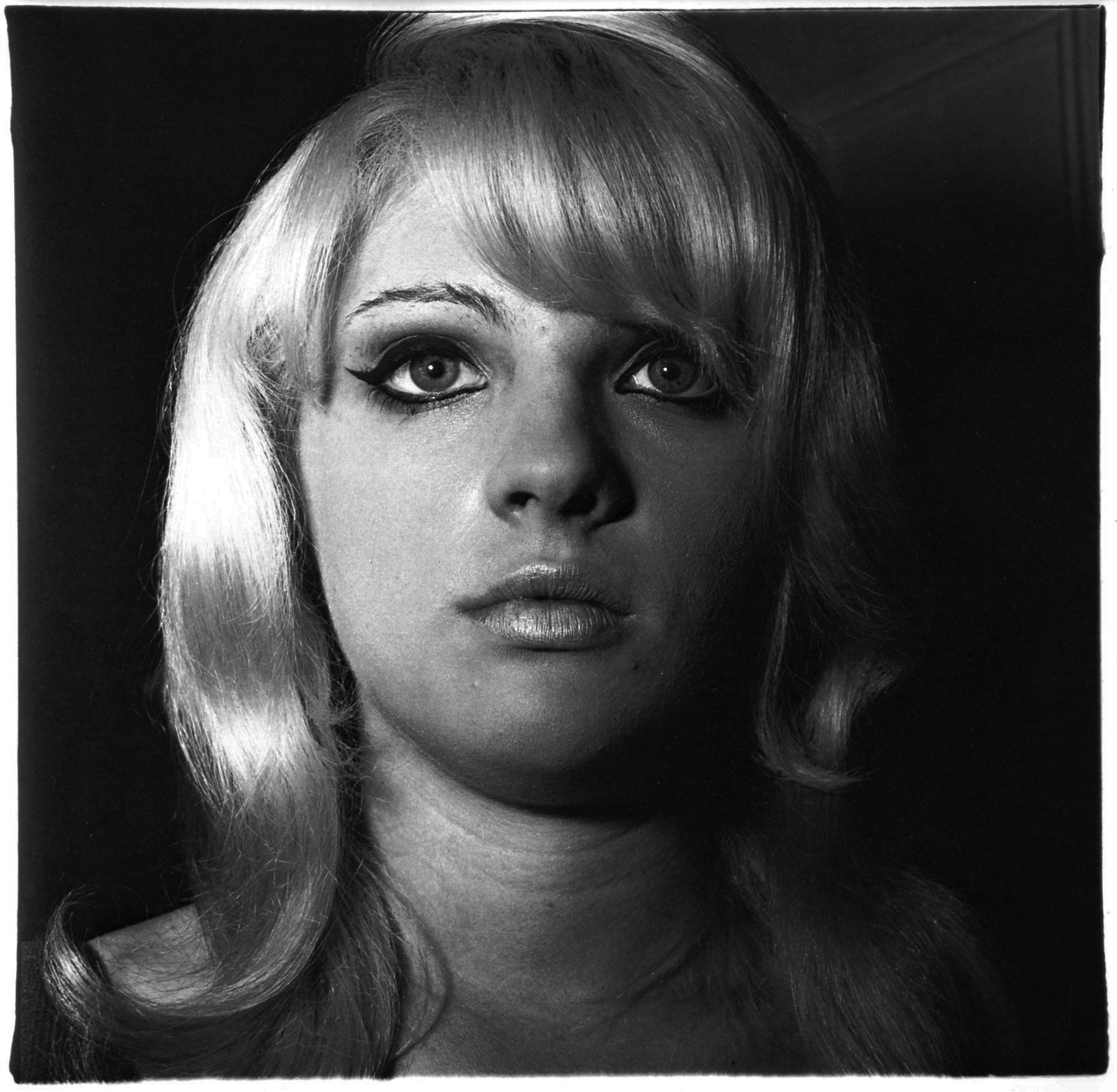 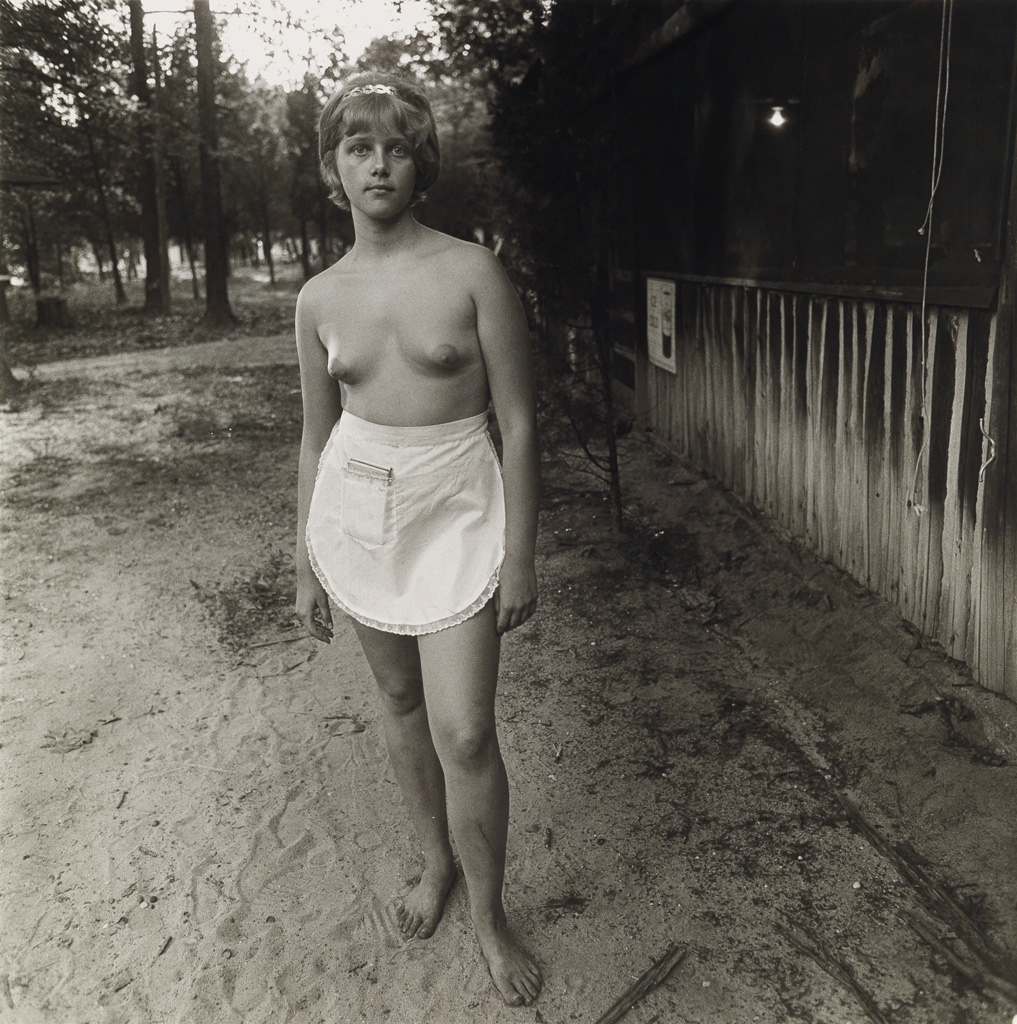 We entered a large bed-sitting room strewn with animal skins and furs and velvet draperies.

Then she appeared at the door, and compared with my image of her, she might almost have been her own daughter. Frail, almost skinny in appearance, shy and almost naive, sympathetic almost to the point of emphasis, pretty almost to the point of beauty, her most outstanding characteristics seemed to be honesty and a kind of fearfulness. She was wearing a long dress in some African-looking material with overtones of the Caribbean.

‘Did I say fifteen minutes?

‘You certainly did, but I guess it’ll be enough.’

‘Well… maybe we could stretch it to half an hour.’ I nodded and followed her up the stairs, leaving behind the entrance hall with a bed-table and chair illuminated by light from a window. We entered a large bed-sitting room strewn with animal skins and furs and velvet draperies. On one wall was a board bearing a collection of map shots and postcard-style images of circus artists, freaks, and unusual-looking people such as are to be seen in the eye-catching window display of a shop which sells rare dirty books on Forty-second Street.

The most peculiar thing about the apartment was the presence of a bicycle in the bedroom, but she explained this by remarking how careful one had to be about theft in New York.

It was warm and humid and the wind blew through the open window to the kitchen and out again by the kitchen window, raising the net curtains in a forty-five-degree angle. We sat upon furs and leather quilts which formed a bedspread on the bed which was only a few inches off the ground. Our discussion started with August Sander and her close affiliation with his work in spite of the fact that she had started photographing long before she had come in contact with his pictures. I neither recorded the interview nor took notes, and the fifteen allotted minutes went by about ten times. In fact, it seemed that I was the one who was being interviewed, for she questioned me unceasingly for about an hour-almost as if she were visiting me in my house rather than the other way round. Her questions were naive and her answers sophisticated. Four or five times the telephone rang, and each time she told the caller that she could not make it for dinner and she could not arrange a meeting but would ring them back if she felt up to it. We said goodbye about three times, but each time I started to descend the stairs she called me back to tell me or show me something else. I saw much of her work, and each image had a story which inspired her to laugh or frown about her subjects.

We also discovered that we had many mutual friends unbeknown to either of us. At times she was coquettish, at times serious, and at times intense, and at no time did she wander away from the subject of discussion or make me feel her thoughts were elsewhere. She radiated a kind of peacefulness, and when she was happy her eyes shone and became moist, and I had the feeling that she would cry at a C-class romantic movie because of her extreme empathetic approach to her fellow human beings.

It was after nine o’clock when I left, and I had made an appointment for 6.30 p.m., but it didn’t seem to matter. I was going to the opening of the W. Eugene Smith and David Vestal exhibition at the Witkin Gallery on the other side of town, and I invited her to join me. She refused the invitation on the grounds that she didn’t like being among too many people, especially after such an intimate conversation as we had had.

I looked around the room for the last time, and our reluctance to part delayed my departure for another half an hour. She promised to let me go this time, opened the door, and I left with a solemn ‘Adieu’.

Warm rain was falling as I hailed a cab a few blocks away, and I listened silently to the echo of her words in my mind as the taxi took me to the East Sixtieth.

In another time about the year 1960 , I was preparing for the Art Directorship of Seventeen magazine and while doing some 6 issues I encountered the studio of Allan and Diane Arbus who had made photographs and were doing fashion for me as well. I met and knew her then , but decided not to bring up that time as my associaition with Lisette Model made me pay attention to the dislike of that period in Diane’s mind. A different time and a different person entirely and at this time her divorced husband is working as an actor in Hollywood.