“I thought that to make photographs, you froze everybody before the fact, but Robert never froze them except in the camera. So that was a revelation.”

Excerpt from “Still Going”, from Bystander: A History of Street Photography (2001) by Colin Westerbeck and Joel Meyerowitz

CW: The name we are giving to this final chapter, “Still Going,” was to be the title of the book of your own black-and-white photographs that you were working on when I first met you in 1974. Do you remember? You were trying to condense over a decade of shooting on the street into a book of perhaps seventy pictures—I still have the maquette for it, just in case you decide to publish it someday—and you asked me to come by one afternoon a week to talk about the images you were considering. To give me some idea of how a photographic book ought to look, you would take out the French first edition you had of Robert Frank’s The Americans, which you had looked at so many times that it had fallen apart, and we would lay out Frank’s pictures in lines on the floor.

JM: The funny part of the story behind that copy of The Americans is that I knew Frank before I knew the book, or even that he had done it. In the early sixties I was an advertising art director working under a man named Harry Gordon, who sent me one day to supervise a shoot where Robert Frank was going to take pictures of teenage girls in an apartment in Stuyvesant Town. They were going to be doing what teenage girls do when they get together—gossip, comb their hair, put on makeup, try on some clothing, just teenage stuff. And Robert worked with these girls, photographing, just using available light coming through the venetian blinds, or from a desk lamp.

He worked so fast and with such focus that I couldn’t believe it. He seemed to be sliding and weaving his way through their lives and around them all the time. Occasionally he would whisper something to one of them, but mostly he made his suggestions physically, in the way he moved. He was just intercepting their movements with the camera. It was a ballet. I thought that to make photographs, you froze everybody before the fact, but Robert never froze them except in the camera. So that was a revelation. I could see the photographs he was making, whereas in the studios I had visited, I never could really. He was using his body to make photographs, and his timing was precise. I remember when one girl putting on lipstick raised her chin a certain way and pursed her lips. Robert went for that little out she was making. Suddenly, the girl had become a woman. A moment later she was just a little girl again putting crayon on her mouth, but that split second before she had leapt into womanhood. 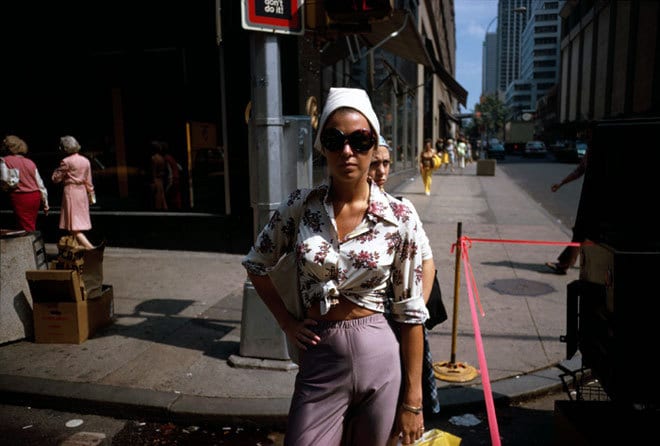 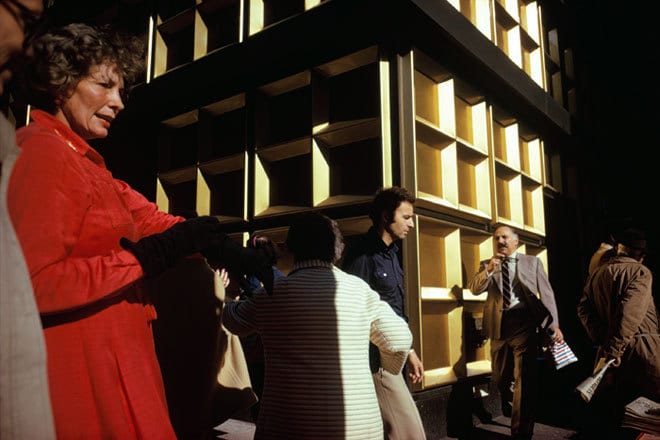 CW: Did you talk to Frank at all then?

JM: No, he wasn’t someone to be awestruck by because he wasn’t Robert Frank. He was just Robert Frank, the commercial photographer. Besides, he wasn’t so forthcoming. He didn’t have much to say. But watching him was truly inspiring. That’s what did it for me. The combination of recognizing the captured moment and the physicality of it, of his moving through time. I was grateful that Harry had sent me down because it changed my life. Even though I didn’t know anything else existed in photography, I went back and told him I was going to quit in order to take pictures.

I can’t tell you why, except that for months I had been yearning to get out of the office. I would stand at the window of the agency’s office, which was at 666 Fifth Avenue, and look down to the streets and wish I was out there. So when I quit, I went right out on the streets. Harry lent me a camera. I started to pepper the streets with pictures, though I had no idea that it was something anybody did. I wasn’t doing it for any reason except it was exciting to me.

CW: But how did you find out about The Americans?

JM: Well, Harry decided a few months later to give up advertising himself to go live in Spain, and when he was unburdening himself of a lot of household goods, he gave me that copy of Frank’s book. “I think you’ll enjoy this,” he said. And wham, there it was, this huge, deep, dark poem about America that gave me something to encounter day after day after day. So that fed me.

CW: There were several years when [you and Garry Winogrand] went out shooting together, didn’t you? How did that come about?

JM: Garry loved company. He needed to be out on the street, and he needed company out there with him all the time. It was irresistible. He was irresistible. He was so full of, “Let’s go! Let’s do!” Right from the beginning, he would call in the morning and say, “Listen, I’ll meet you at the greasy spoon on Ninety-sixth and Amsterdam: we’ll have coffee, we’ll go out, we’ll shoot.” I was up and ready to go. I was off and running for three intense years-1962 to 1965-with this guy, this unstoppable bundle of nerves. 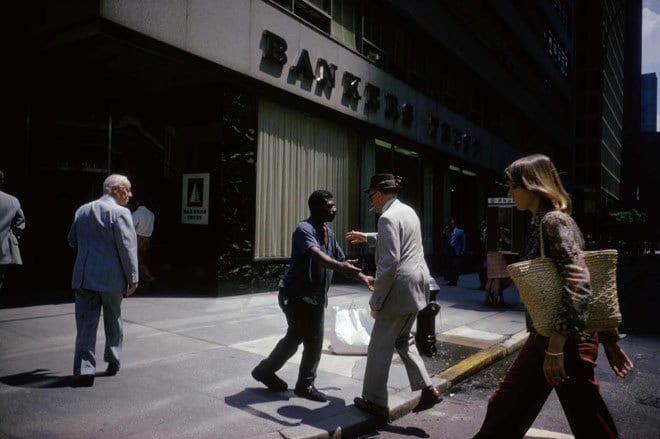 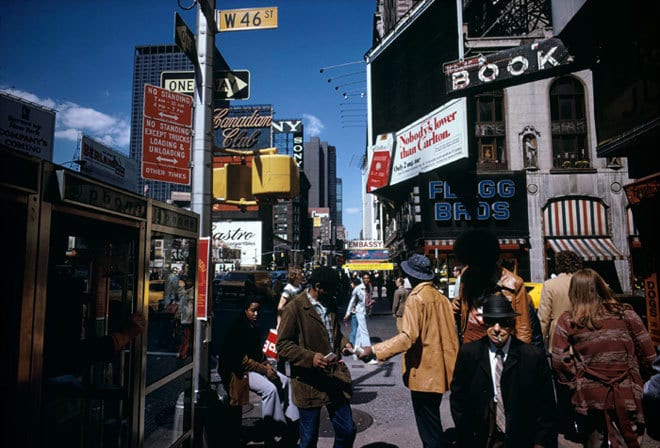 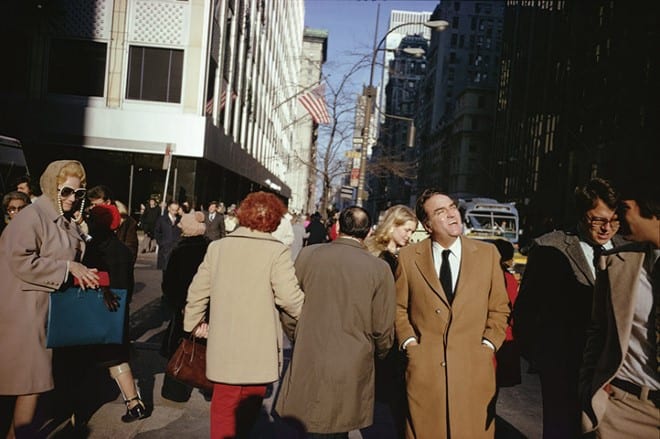 “Fifth Avenue was the most exciting, and it had the most light. I think Madison was too dark, Park was too wide, Third still had the El in the early sixties, or they were beginning to tear it down-anyway, Third was creepy.”

CW: When I first knew you, in the mid-seventies, I would come along to keep you company when you were shooting sometimes, and Fifth Avenue always seemed the best to me. You could just feel the money and sex and ambition out there every day, surging up and down the street. Did Fifth always seem such a special hunting ground for you street photographers?

JM: Oh yeah. Because Fifth Avenue was the most exciting, and it had the most light. I think Madison was too dark, Park was too wide, Third still had the El in the early sixties, or they were beginning to tear it down-anyway, Third was creepy. Sixth Avenue didn’t have much on it. We certainly made some circuits around there, but really Fifth Avenue had the pulse of lie, the most vigor, the most beautiful women, the heaviest business action. The mix was best on Fifth. I mean, you got it all, from high fashion to messengers. It just was everything. Pushcarts, pretzel vendors, and limousines. It had the contradictions of life in a big city, and that kind of counterpoint was the stuff of commentary. That’s what you could mock, that’s what you could wait for, because it was more exciting to see those combinations there.

“Of course. We went to every public demonstration, every ‘be-in’ in the park, all of the gatherings down in the Forties and Times Square; whenever there were marches, we all went.”

CW: But the sixties were also the great time for street theater and protest demonstrations. You were all responding to that too, weren’t you?

JM: Of course. We went to every public demonstration, every “be-in” in the park, all of the gatherings down in the Forties and Times Square; whenever there were marches, we all went. We really went for two reasons. You lent your body to them because it was right, but also because it was a great place to make photographs. It was chaotic, and it was huge crowds, and the media was there. This notion of the media and the power of the media emerged form those demonstrations.

People would just be milling around when all of a sudden the CBS truck turned on its lights, and the whole thing shifted. Everybody moved toward that truck. They were just turning on their lights to film what was in front of them, but it put a finger on a action, and it created a mass movement, and it created the event, because then the police arrived and the demonstrators arrived, and Bam!, confrontation. Then the NBC truck turned on its light. The thing moved up the street. It was like pinball, media pinball.

We all began to see the meaning of the change that represented, how it differed from what photographers like Cartier-Bresson, or like us, would do. The television crews didn’t try to come in and not bruise the event. They controlled and directed the event by focusing their cameras. You know, everybody wanted to be in the spotlight, they wanted to be on TV. We began to see that the power was in the hands of the media. Eventually Garry was going to make a book about public relations, which was an interest of his that began with going to those kinds of demonstrations.