It’s hard for me to describe the fascination that William Eggleston’s photographs exert on me.

William Eggleston: Draft of a Presentation

It’s hard for me to describe the fascination that William Eggleston’s photographs exert on me. More than twenty years ago, I bought William Eggleston’s Guide, the catalogue of his solo show at the Museum of Modern Art in New York City in 1976. Time and again, I have looked at the color plates of this book, and I still can’t really explain why they have preoccupied me for so long. Is it the seeming familiarity of their motifs? The type of photography? Naturally, I have gotten to know more pictures by this photographer over the years. And every time I see a new picture of his, there is this moment of recognition, a first hasty grasping, and then the close study of the photograph. The subject matter, the composition, the color. His photographs burn themselves in our memories, and you can’t get rid of them. Why is that so?

I consider a photograph interesting whenever a photographer’s view of reality does not double my knowledge of the world, but a difference between our respective perception occurs. The smaller the difference, the more intense is its effect on me. Thus, it’s less about a precise representation of reality than the formulation of the representation of the world. From this viewpoint and within the technical medium, we can talk about the photographer as an author who–on the basis of facts and by means of a minimal shift of perception–creates a fiction in close proximity to reality. In literature, I like those stories the best that are told in an understandable, precise language. In the best case, an author cannot only describe the situation and objects, but can endow them with a deeper meaning and lets them transcend themselves with a disturbing force. This is an irritating trait of literature (and of any art form) as it deprives us of convictions and poses more questions than it answers.

William Eggleston’s photographs have this disturbing quality. At the first glance, his pictures appear like the photographs of an amateur. But his ‘snapshots’ have consistency that ultimately cannot be the result of an accidental creation. Upon closer inspection, you notice that his photographs are the result of an artistically justified appropriation of a popular and thus easily accessible visual language. Occasionally, it is augmented by uncommon perspectives, but usually a likely human viewpoint is favored. The result is paradoxical: Charged by the artist with a dimension hitherto unknown to us, the world presents itself as familiar and strange at the same time.

When I look at the more than thirty-years old photographs of Los Alamos, I recognize another attribute of all the photographs in the series. Although we know that the photographs were taken in the past, they seem timeless, contemporary even, and new. An essential role in this process, besides the choice of subject matter, is the special use of color as a means of creation. William Eggleston uses the by now technologically outdated dye-transfer process, which was mainly used in the world of advertising in the 1950s and 1960s. This process makes it possible to give specific colors a pronounced saturation and to endow them with an enormous intensity. This technique allows William Eggleston to subjectively control colors like a painter. And this manner of interpretation contributes to the fact that you often have the feeling of consciously seeing an object for the first time or of getting to know an aspect of its character that has remained hidden to us so far. 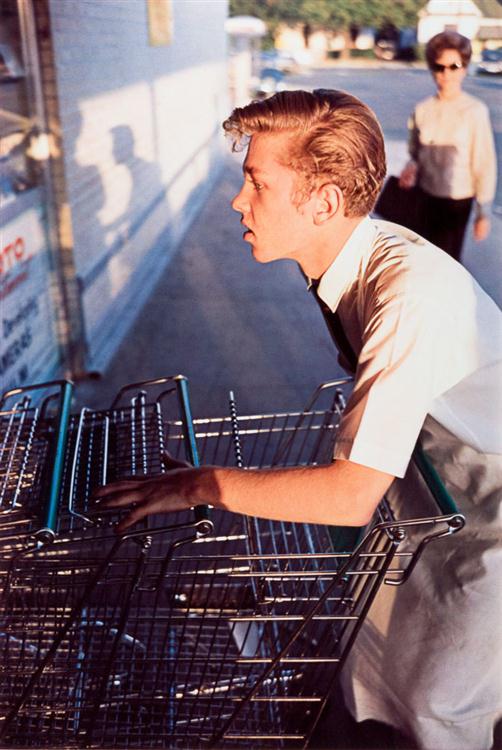 In Los Alamos, his first work in color, William Eggleston outlines his kind of photography.

At the moment, the new generation discovers the work of William Eggleston, and it seems that they effortlessly understand his photographs. As they have grown up with color in film, television, and print media, color is a completely normal technical possibility to them to realize an artistic concept. That the use of color photography in this field was considered a matter of course is a thing of the past to them and without great significance. They are much more interested in the way William Eggleston got his images. Are the photographs the result of a careful set-up? Again and again, people ask this question as they cannot imagine that these photographs were ‘found.’ Confronted with perfect artistic constructions of authenticity, in the work of Jeff Wall or Andreas Gursky for instance, the direct engagement of the world hardly seems a possibility at this moment. It was rare that artists engaged in an open-ended creative process in the 1990s. There was a neat separation between artists who used photography and staged their images, and photographers whose work was considered the mere result of sturdy shoes. Only photographers like Nan Goldin, Richard Billingham, and Wolfgang Tillmans–from different creative perspectives, but with great ease–have ignored these boundaries and have insisted that their genuinely photographic works are part of fine art. In their photographs, they used stylistic devices that an older generation of photographers, like Robert Frank, William Eggleston, or Lee Friedlander, had already developed a couple of decades ago. This way they continued an already existing artistic tradition of appropriating the snapshot style as a device that allows for chance in the process of finding images and assigns it a significance, recognizing that the unpredictable enriches the content of the images. They work within the technical limits of photography as they understand the specific characteristics of the medium to be its strength. They also follow their predecessors in their attitude as authors who arrange single images in visual essays, be it in a linear, serial form, or in the manner of an open arrangement. The goal is to devise an accessible, readable, yet complex visual structure that gives the viewer the opportunity to associatively collaborate.

The images in Los Alamos were taken between 1966 and 1974. The long-term project was intermittently interrupted for four years, because the photographer worked on William Eggleston’s Guide. In contrast to this project, Los Alamos was never evaluated, part from a few images. It seems that the entire project was forgotten after the initial idea of publishing thousands of photographs in portfolios–in order to render intelligible the way seeing inherent in the artist’s ‘democratic camera’ that ignores all representational hierarchies–was abandoned. Only recently, the photographer remembered the material at hand that is the center of the project. In Los Alamos, his first work in color, William Eggleston outlines his kind of photography. At the first glance, it seems associated with his environment, everyday life and its objects. Yet upon closer inspection, you notice that the photographs transcend the merely descriptive.

William Eggleston is tied up in a love-hate relationship with the American landscape and civilization.

I imagine that the trips for Los Alamos were part of a creative process. Did he go on these road trips in order to take photographs, or were the photographs the result of a time spent with friends? William Eggleston’s travelling companions were, among others, the curator Walter Hopps and the actor and director Dennis Hopper who, like the photographer, were interested in various representations of everyday life. Certainly they frequently stopped on these trips without a final destination, got out of the car, and took pictures, and hence these images are also part of the life of the photographer at the time. And yet this is not an autobiography or travelogue providing information on the course of being on the road. 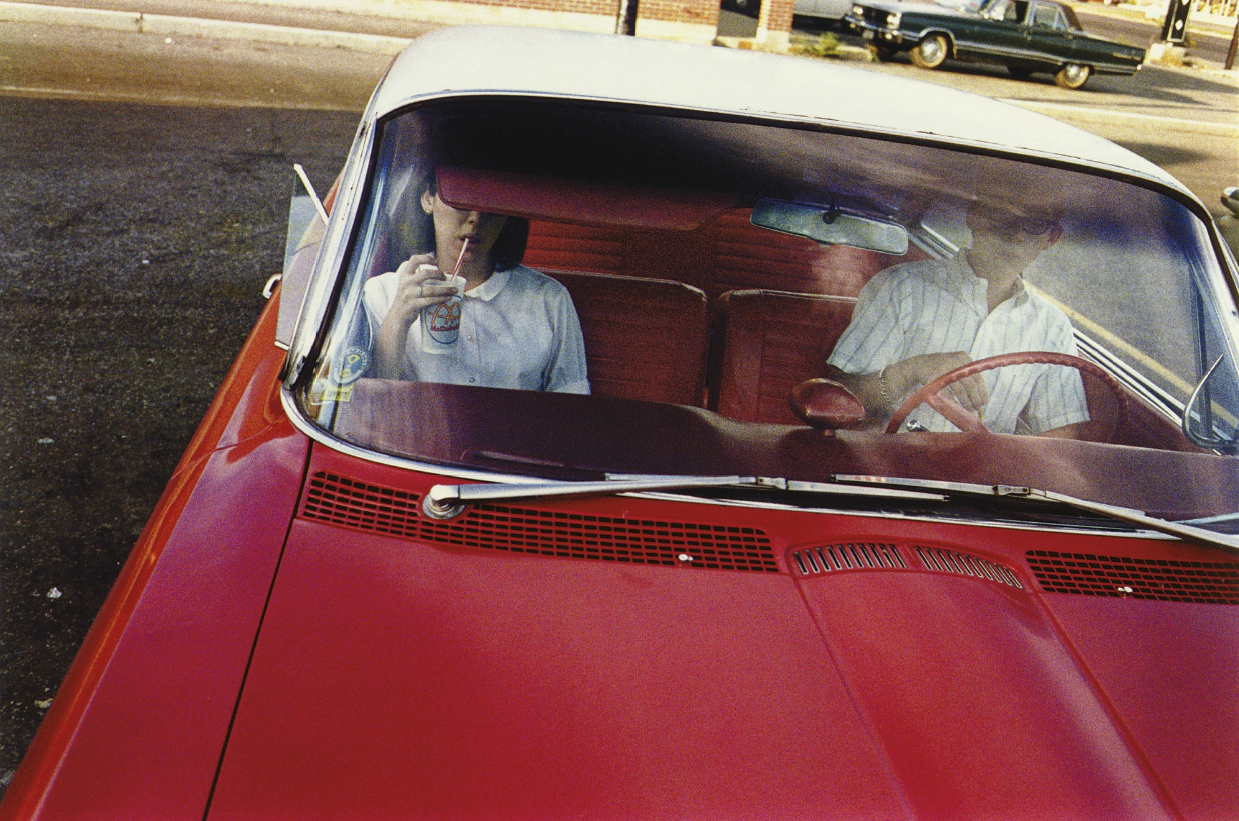 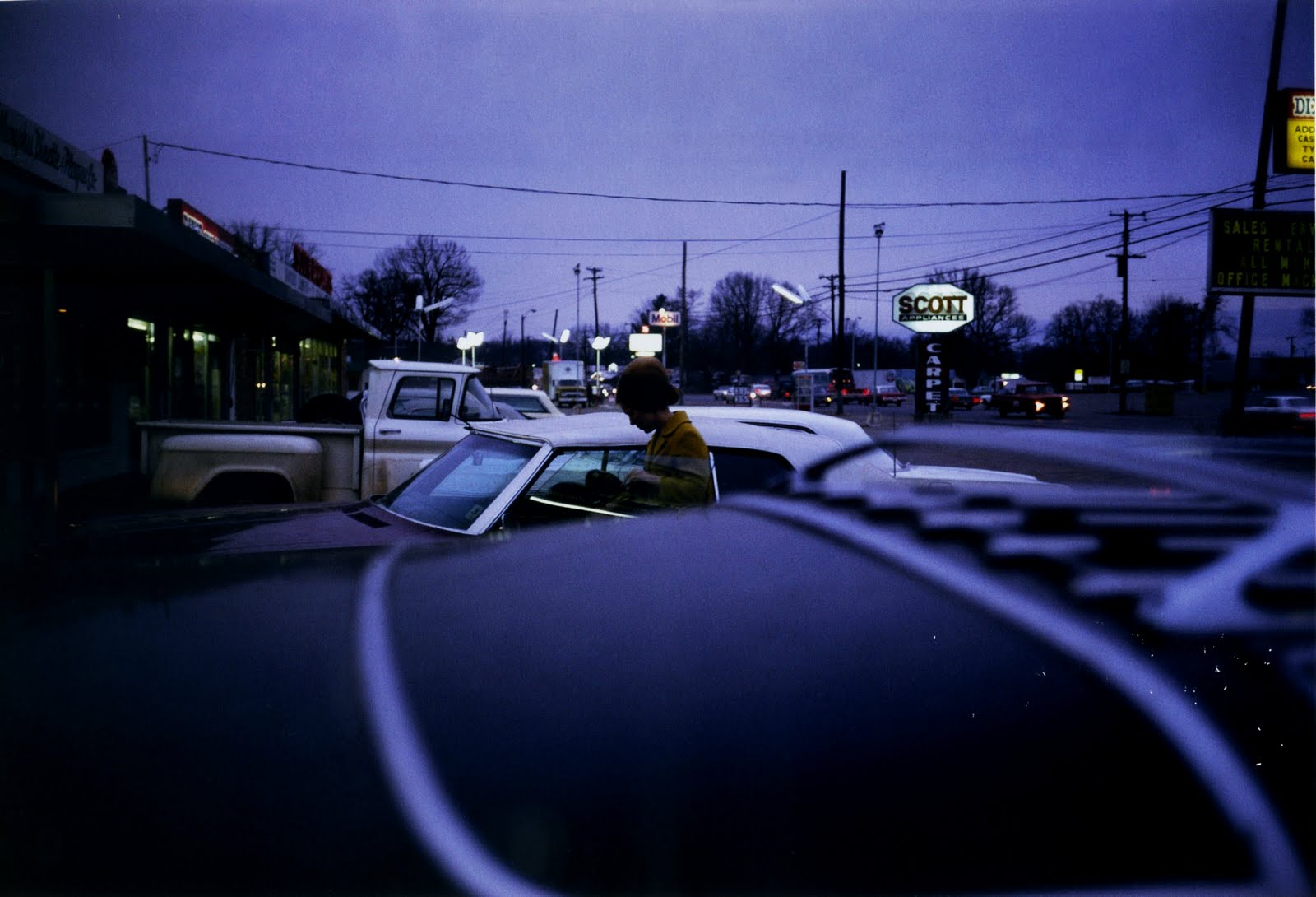 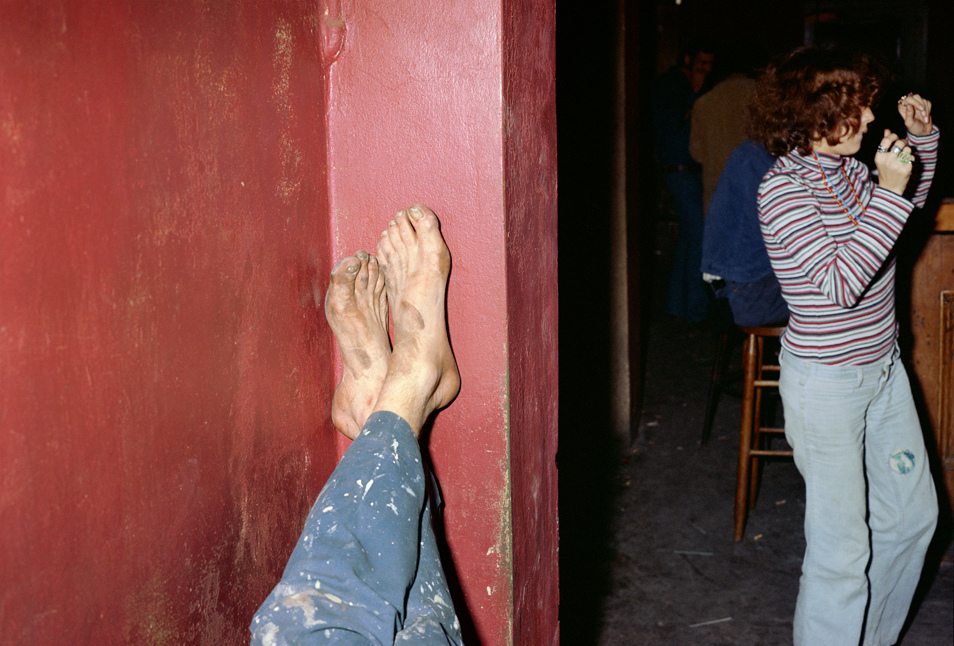 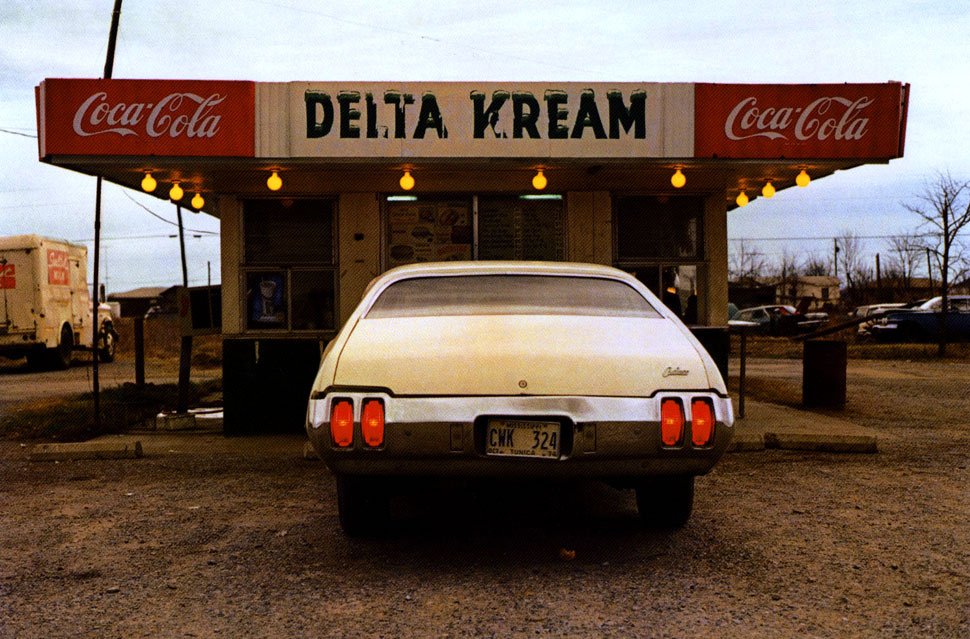 Everyday objects provide William Eggleston–fascinated and repulsed by the visible manifestations of everyday culture–with the raw material for his art.

William Eggleston is tied up in a love-hate relationship with the American landscape and civilization. Every conceivable everyday object is effortlessly integrated in his visual world and develops a rather peculiar life of its own. As they are often tightly cropped, the majority of the photographs in Los Alamos is geographically unspecific–it doesn’t matter whether these images were taken in Los Angeles, Memphis, or Oxford, Mississippi, as they are not descriptions of places. Everyday objects provide William Eggleston–fascinated and repulsed by the visible manifestations of everyday culture–with the raw material for his art. Like the films of Alfred Hitchcock and David Lynch, his photographs are defined by a condensed atmosphere that manifests itself in a latent threat. In Raymond Carver’s short stories, too, it appears that an abyss lurks underneath the veneer of a deceptive tranquility. At first, objects present themselves in an entirely natural manner in William Eggleston’s photographs, which are not narrative in a traditional way. They first exude a sense of “This is the way it is” to subsequently develop their uncanny essence. The images don’t explain the world in an analytical, matter-of-fact, and distanced way to the viewer, but we find ourselves exposed to the suggestive lure of the photographs that we cannot resist. This is because the photographer manipulates color to emotionally affect our perception. Other ways of reading objects, associative developments of their nature, and hence entirely individual understandings are released. With this attitude, William Eggleston created pioneering work in photography.

A lack of spatial depth and a narrowing of perspective in the majority of the photographs give the objects an unusual, sometimes almost unbearable presence and penetrative obtrusiveness as if you were on drugs–they all contribute to the intensity of this experience. The mood of the images turns from familiar to menacing, and we loose our certainties. Between the single images of the series a meaning arises that renders visible the cracks in the surface of the American dream. We all know its manifestations–alienation, loneliness, and desire–as they can be found everywhere in Western civilization, and we all suffer from them. Our head still dizzy from the magic tricks of the photographer, who appears in some of the photographs as a shadow or fleeting image in a mirror, we notice that we have been lured into his idea of the world. As one of the few original photographers, William Eggleston has written the story Los Alamos in his own language, and hence the images are an expression of his vision. In and adventurous balancing act between disturbing content and seductive beauty, the author shows us the fragility of our existence. Under his guidance we reach safe ground, we close the book–but he made us peek in the abyss, and we will never forget. 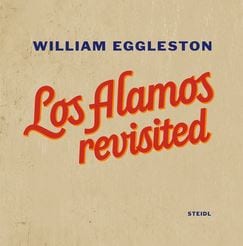