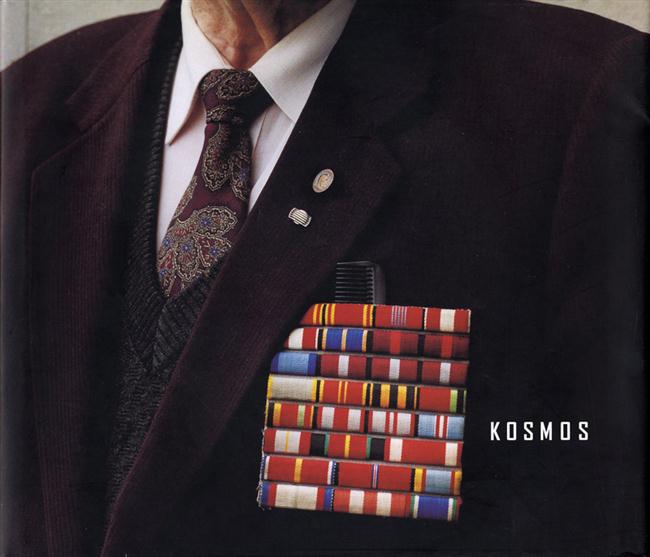 The striking thing–or what strikes you first–about Adam Bartos‘s photographs of the people and places of the Russian space program is that they let you In: into a world thought to be off-limits and into the space of the photographs themselves, which are so large that much of what is depicted is itself life-sized. Though large-scale photographic prints are a trope with which we are familiar, the pairing here with the shattering of (larger than life) Cold War myths leaves you feeling a little disoriented, faced with the day-to-day settings and domestic environs of a reality previously accessible only to the imaginations of those on the western side of the Iron Curtain.

It turns out, of course, that the principal secret concealed by the Soviet Union was the shaky state of its economy, the collapse of which came faster than anyone could have expected–brought about in part by disproportionate government spending on defense. Scanning the milieu depicted in the photographs of “Kosmos”, it is surprising how old everything is. Under the weight of fiscal pressures the Russian space program slowly ground to a halt in the 80s once the immediate goal of putting a man in space trailed off into the disappointments of the manned lunar mission, which was cancelled in the 70s; the quagmire of aging space station Mir, with its fires and frequent malfunctions; and, most recently, the embarrassing prostitution of the agency for the lucrative space tourism of Dennis Tito and others. The figures of the Russian space age–including Vasiliy Mishin, chief designer of the Russian missile program, Lieutenant-General Kerim Kerlmov, who supervised the Soyuz rocket program and the launch of the Salyut and Mir space stations, as well as Aleksandr Kemurdzhian, who designed the lunar rover–appear wizened, but proud in Bartos’s photographs. They are part of a group whose silent and rusting facilities–one image is a highly geometrical view of an abandoned launch pad–belie their past triumphs. The small, tidy rooms of these men’s homes and apartments, with their institutional wallpaper and Soviet-era furnishings, are filled with memorabilia of that exciting time: models of rockets and boosters, maps of the moon, a trophy of Vostok, the first Russian space capsule. As Svetlana Boym comments in her essay accompanying Bartos’s photographs in the catalogue, “Kosmos: Portrait of the Russian Space Age,” the Russian word for satellite is sputnik, or companion; the Russian equivalent to the English phrase “outer space,” which suggests a division to be conquered, is kosmos, a word that signifies an order or harmony between earthly and celestial spheres. Boym writes that the space program and the men who pushed it for ward were not Just exploring space: they were advancing communism itself. Cosmonaut Yuri Gagarin, the first man in space, was, in addition to his role as the most visible manifestation of the successes of the planned economy, for the Russian people a sort of exemplary first citizen of a dawning new age, the imagery of which drew on state sponsored myth and homegrown Russian cosmism alike.

In place of the strong visual directives of Russian graphic art and the grainy news photos that usually represent the Russian space program, Bartos substitutes a quiet, but firm pictorial structure. Though primarily documentary, the photographs of “Kosmos,” like those of the United Nations he is also known for, seem almost constructed. Both the facilities of Balkonur cosmodrome, the central launch facility for the Russian space program, and everyday objects–Bartos is particularly attracted to the bulky telephones of the Soviet era–are aestheticized, a combination of artificial and available light enhancing their color and forms. The resulting effect gives Bartos’s images an internal glow reminiscent of that seen In the work of Canadian photographer Jeff Wall. “Kosmos” has a self-reflexive, even introspective, quality: a man in a blue lab coat pushes a button to perform dynamic tests on a three-story Zarya Control Module, or functional cargo block (the first component launched for the International Space Sta tion); an unused Mir space suit lies prone in laboratories of the Zvezda testing facilities; heroic portraits of the father of Russian cosmonautics, Konstantin Tsiolkovsky and the founder of the Russian space program. Sergei Korolev, stare down on an empty classroom at the Scientific Research Institute of Chemical Machine-Building. The sense of absence at the heart of Bartos’s disconcertingly formal and sparsely populated tableau structure turns the focus back on the viewer: you naturally find yourself projecting Into the space of the photographs, participating in an unfamiliar collective memory, stopping just short of nostalgia for a place and time you heretofore knew little about (many of the places and people depicted in Bartos’s photographs were previously prevented from being recorded by Russian security procedures).

The irony here is that newfound good American relations with Russia and a relaxation in Russian security procedures–though many of the places photographed were re-classified as a result of September II–coincides with a build-up in tensions between the U.S. and another space-oriented nation, China. Before the destruction of the twin towers of the World Trade Center and the resulting War on Terrorism, the Bush administration appeared to be ramping up a rift with the world’s largest country. The two nations rattled sabers over the downed American spy plane on Hainan Island, cyber-espionage and Chinese military operations off the coast of Taiwan. History tells us that the first manned rocket was in fact Chinese, built by the sixteenth-century scientist and philosopher Wan Hu, who died in a cloud of smoke and flames when his rocket-propelled chair exploded on lift-off. More recently, China has successfully launched a series of Shenzhou (meaning divine, or magical vessel) unmanned spacecraft. It is predicted that within the next few years, Chinese taikonauts, after years of delay, will finally be on their way to the moon. With power in a linked global society increasingly tied to communications facilitated by space-bound stations, such as satellites in geo-synchronous orbit, we would do well to keep in mind the sort of spatial and mental barriers between nations pointed to in Adam Bartos’s photographs of the Russian space program.

PHILIP W. MARTIN is an artist and writer. He lives in Los Angeles.