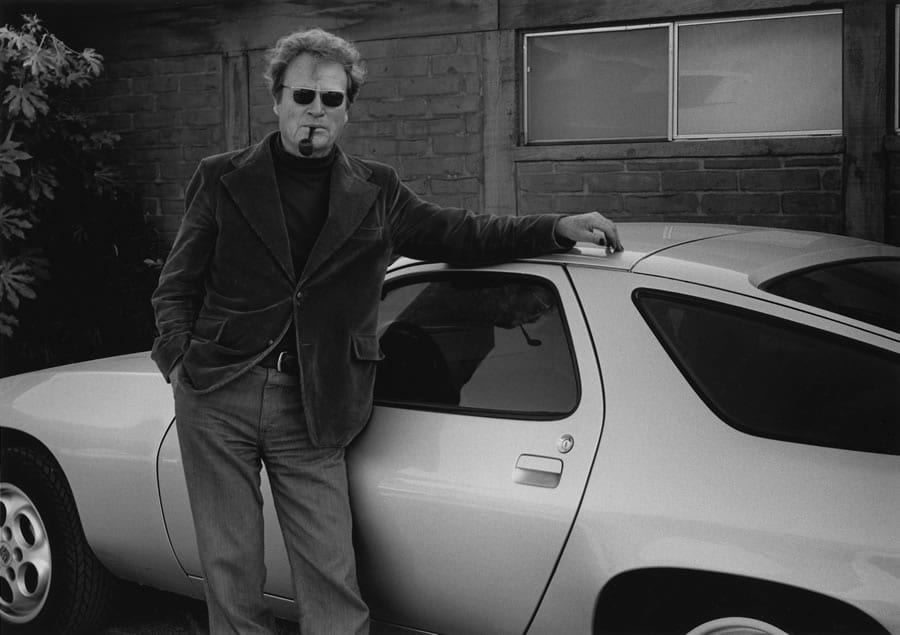 He has been called a photographers’ photographer. His virtuoso work has been compared in it’s influence to that of Bach, and parallels have been drawn between his life and Picasso’s.

The son of Edward Weston and Flora Chandler, Brett Weston has produced a consistent and prolific body of astonishing images since 1925. He has utilized his energy and natural gifts for almost seven decades. A full sixty-eight years of uninterrupted endeavor, a prodigious span of sustained attention, persistence of vision, and unflagging creative drive.

The “child genius” of American photography turned eighty on December 16, 1991. On that date he began destroying nearly seventy years worth of negatives. This interview was conducted about two weeks before, on December 3.

Steve Anchell: When and where were you born?

Brett Weston: I was born in Los Angeles, on Los Feliz between Hollywood and Glendale, near Griffith Park. It was actually at the Chandler Ranch, which my grandmother owned, at the mouth of the San Fernando Valley. It was December 16, 1911. That’s Beethoven’s birthday, too.

SA: Congratulations to both of you.

SA: I understand that you plan to destroy your negatives on your 80th birthday, that would be in about two weeks.

BW: Probably before that. I always say I’m going to burn them on my birthday. But I’m not going to actually burn them because of the pollution, I will destroy them, though. You see, there are plenty of prints around, but I couldn’t print your negatives, the way you would, and you couldn’t print mine.

BW: Under his supervision.

SA: Couldn’t you train someone to do that?

SA: No, but there is a difference. Your work is a legacy. Your vision has significance beyond anything that has been done in the latter half of this century. It has significance not only to photographers, but to visual artists working in all media. If your negatives are destroyed, there will come a time when your work may not be available to inspire future generations. You will be limiting it’s accessibility for historians, students, and young photographers.

BW: That may be true. But I have never played to a large audience. I would rather have 10 people who understand and appreciate my work, than ten thousand who get excited because they’re told it’s the thing to do. I love appreciation, we all do. But, I don’t photograph for anybody but myself.

I don’t think of it in terms of money. Once the work is completed that’s a different thing. I might make a portfolio to sell, but I don’t have that thought in mind when I go out to make a photograph. I do it just for the love and excitement.

My dad donated his negatives to the Photographic Center in Arizona. Truthfully, if my dad were alive today I’d say “Dad, don’t do it.” I’d argue with him. But he was very generous. I wouldn’t do it. Cole printed his negatives for years. I printed his fiftieth anniversary portfolio, a huge number of prints, under his direction in 1952. They sold for $100.00, which in those days was a lot of money.

SA: Your prints didn’t sell for too much until ten, fifteen years ago?

BW: No, the photographic boom didn’t start until Lee Witkin, one of the first people to successfully show photography. Actually, before him Julian Levy had a gallery in New York, about fifteen years ago. I was selling very, very few prints, even though I’ve supported myself selling prints since I was a kid. I was no good in the commercial world. I just couldn’t do it, thank God! Don’t misunderstand, I respect a commercial photographer, but it’s just something I can’t do. I’m too devoted to my own work. 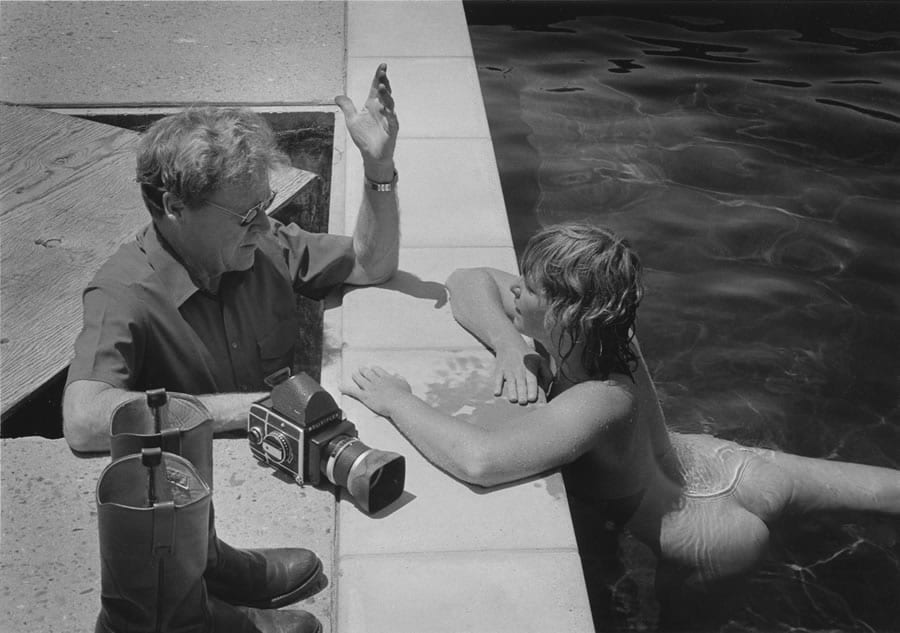 Modern film and optics are amazing. It’s marvelous what you can do. I really miss the big formats, though. It’s a very direct way of working. I’m used to the small formats now, not 35mm, that’s a specialized tool, which I respect, it’s just not for me. Eugene Smith and Cartier-Bresson, both men I knew, have done magnificent work with 35mm, it’s just not right for what I do. The smallest I use is the Rollei 6×6, it has front swings, a superb camera.

SA: How has using a smaller camera affected your work, altered your seeing?

BW: Well, in some ways it’s improved things. I’m more flexible, fluid now, and it’s more spontaneous in a way. I’m able to use it on a tripod like a small view camera, unless I’m doing portraits or underwater nudes, then I hand-hold.

SA: How often do you do portraits?

BW: Just when I feel like it. I don’t do it for money, just for myself, but not very often. I’ve had to do portraits in the past, for bread and butter. I had portrait studios at one time or another in Santa Monica, San Francisco, Santa Maria, and in Santa Barbara, but like I said, I was never a very good businessman. I have always been primarily concerned with doing my own thing. Fortunately, I was willing to live simply and economically, and I still do, although, by comparison, I make an enormous amount of money through the sale of my prints.

SA: Your vision is unique, you’ve never been in the main stream of photography.

BW: I hope not! But I don’t try to be different, I just am. If you strive to be different all the time, it gets to be obvious, contrived. My work is a way of ‘seeing’, it’s one’s perception, one’s vision.

SA: There’s something unique that makes an artist. Any one can master the techniques to create, but there’s only about 5% that achieve genius.

BW: This happens in music, literature, painting, you can’t teach that. You can teach technique, but you know that. A lot of teachers don’t realize that. Given the material, a good teacher can excite and stimulate someone to create, but he can’t make them an artist.

SA: Your work contains elements of violence, power, strong strains of masculine energy. It often explodes off the paper it’s printed on. I notice a tendency in your more recent work, that is to say the last decade, to move in close and create abstractions. Many photographers move in close with their cameras and come back with nothing.

BW: I have my share of that too. One becomes more assured as you get older. I say ‘assured’, I don’t mean cock-sure or arrogant, it’s that you become more aware, more perceptive. As a young kid, I had a certain kind of an eye, different than my father’s, which he was very aware of. Of course, I was greatly influenced by him, but it’s all in what a person adds, we’re all a part of a stream.

SA: If you recognized potential in a young person, what would you do to bring it out of him?

BW: Oh, I would encourage him to work, if it’s there it will come out. I think artists are born, not created in art schools.

SA: Not limiting yourself to photographers, who were the major influences in your life?

BW: Well, in a large sense, everybody I meet. Particularly musicians, sculptures, painters, some photographers. My father, of course. But I never intentionally imitate anybody, not consciously, at least.

BW: I don’t encourage that. I don’t like to see ‘followers’. Ansel did, but my father never encouraged it. He was very generous, my dad, but he didn’t like to have people imitating him. But influence is something else again, Dad was influenced, we’re all influenced, we’re just a progression, building on what’s gone before.

SA: What musicians influenced you?

BW: Well, I knew Stravinsky, he’s the great contemporary. I was raised on Bach, Mozart, and Vivaldi. Those are people I love. Contemporary musicians I don’t generally respond to. Some jazz, not very much. Some early New Orleans jazz, I like the Flamenco. It’s a personal thing. The classics I respond more to, Brahms, Beethoven. I generally prefer Bach to Beethoven. Bach never lets me down, Beethoven sometime does. Bach is more of a musician’s musician.

SA: That’s probably because Bach composed for a limited audience, whereas Beethoven composed for much larger audiences. I would compare Ansel to Beethoven and you to Bach.

BW: Ansel played to an audience all his life. He was trained as a musician, a very fine one. I met Ansel in 1928, before you were born. I also like Pablo Casals, he played into his 90’s. Matisse is one of my favorite artists. He continued painting into his 80’s.

SA: You’ll be 80 in a few weeks and you’re entering your 70th year as a photographer. You’re still very active. Are you working every day?

BW: That’s right, I’m working every day and I love it. I was printing this morning at 2am. I don’t print for as long as I used to. Only 3 hours. But I do it every night. It’s wonderful, the phone doesn’t ring, I can leave the windows open to let fresh air in, because it’s night, especially in Hawaii.

SA: What about new work?

BW: Every day. As soon as I finish printing a negative I’m ready to go on and make a new one. I don’t like reprinting the same negative all the time. In fact, I’m leaving for Hawaii in a few weeks. I’m anxious to get back there and work some more.

SA: The image “Holland Canal” must drive you crazy.

BW: Oh it does, I’m just sick of it. It’s not a bad photograph, but I’m just sick of printing it. I stopped printing it in 1980. I call it my “Moonrise”. I went round and round with Carol (Williams) about using it for the cover of my latest book, Master Photographer. Have you seen my last two or three books?

SA: I have Personal Selection, Five Decades, and Voyage of the Eye.

BW: Personal Selection is my best book. The last book, Master Photographer, is a little bigger, has too much writing, and I don’t like the title, but it’s wonderfully reproduced. There are two more on the way. They’ll be the last. I can’t be bothered, I’m too involved in my work.

BW: Too much poetry in that. I have nothing against poetry, but I don’t think photography needs poetry. They want to bring another edition of that book out. I’m not going to let them unless they include 30 more images selected by myself and eliminate the poetry.

SA: Brett, when I think of your life and your work, there are two words which come to mind . . .

Posted in Interviews - All and tagged Brett Weston, Interview, Interview B, Steve Anchell.