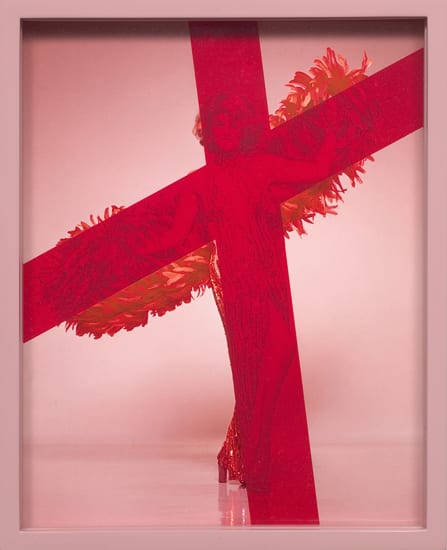 Elad Lassry approaches photography as if it is intangible, assuming that when broken into parts, the medium can productively turn in on itself. Lassry brings curiosity and intellect to “looking” and to the appropriation of existing images, displaying an unusually subtle yet purposeful intentionality. To the largely anonymous pictures he “rescues” from such sources as old magazines, textbooks, and stock footage, Lassry adds traces of his own artistic identity and presence: much like the prevenient figure of Hans-Peter Feldmann, the German artist who, beginning in the 1960’s, made editions of small booklets of typically uncaptioned, found images such as posters, postcards, and magazine clippings. Feldmann categorized his enormous “picture archive” according to a personal, idiosyncratic system. Lassry’s aim is to “reconsider histories of building images and making pictures.” He has stated: “My research starts from a place that acknowledges the problems with pictures on many different levels.

Lassry has an immigrant’s vantage point on American culture, having been aware of American pop culture imagery while growing up in Israel, and then deciding to move to the United States to attend art school. He is drawn to mid-century aesthetic, as found in photo essays in publications such as LIFE magazine that have a temporal remove from the present that renders them both foreign and oddly comforting. Sometimes Lassry leaves an image in a relatively straightforward form, such as in Burmese Mother Kittens (2008), where a double-take occurs only after the viewer notices the kittens’ strange puppy-like character. Lassry’s authorship is more explicit in Green Plinth, Her, Blue Neon Tube (2008). Here, Lassry constructs his work from various parts: a cropped picture of a woman demonstrating exercise techniques, a barely recognizable “passport portrait” of a neon tube, a shadowy plinth. The image of the woman comes from an obscure 1970’s book made by a husband-and-wife team for women about building muscle. The angled line of the blue neon tube meets the ankles of the stretching woman, creating a wide V-shape atop the dark plinth. With the context and circulation of its constituent parts reformulated, Green Plinth, Her, Neon Tube demonstrates the distinction between what Lassry calls a “cooked” versus a “raw” image. 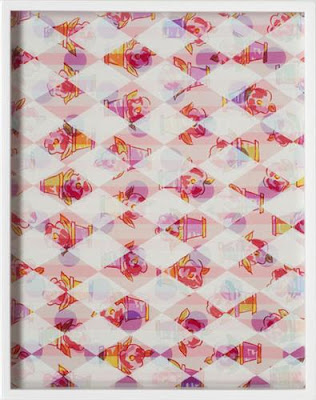 Pictures generated by the movie industry, including production stills and head shots of aspiring actors, are another treasure trove for Lassry. In Red Cross (2008), a gaudy publicity shot of Ann Margaret decked out in feathered boa and spangled dress is overlaid with a red foil cross. The cross maps out the pose of her body in a strategy of re-objectification, and the foil makes the image, originally produced for mass distribution, a unique work of art. The cross also invigorates the surfaces – sequins, feathers, and flesh-captured in the original image.

Lassry’s interest in the means and reasons for the production and display of pictures is carried into framing. He often uses metal frames, the type that are available in every color of the rainbow and are often used for inexpensive posters. Each is carefully color-coordinated with the picture, with the resulting objects sometimes flirting with tackiness and absurdity. In Untitled (Red Cabbage 2) (2008), a slick and uncanny picture of halved red cabbages displayed on colored, mirrored pedestals, the dominant color, a hot lavender, is repeated in the frame. In contrast is Lassry’s Hollywood Bowl, Fog (2007), a misty panorama with the Los Angeles landmark in the foreground, which is beautiful, accessible, and modestly framed.

Both in his recognizable and more ambiguous pictures, Lassry poses a variety of aesthetic and theoretical questions. What does it mean to be represented pictorially and, relatedly, how is something thus captured representative of its kind? Most vitally, he asks, what does a picture reveal, intentionally or otherwise, about its maker’s personal and artistic identity?

(© Otis College of Art and Design, 2009. All rights reserved. All images © copyright the photographer and/or publisher)